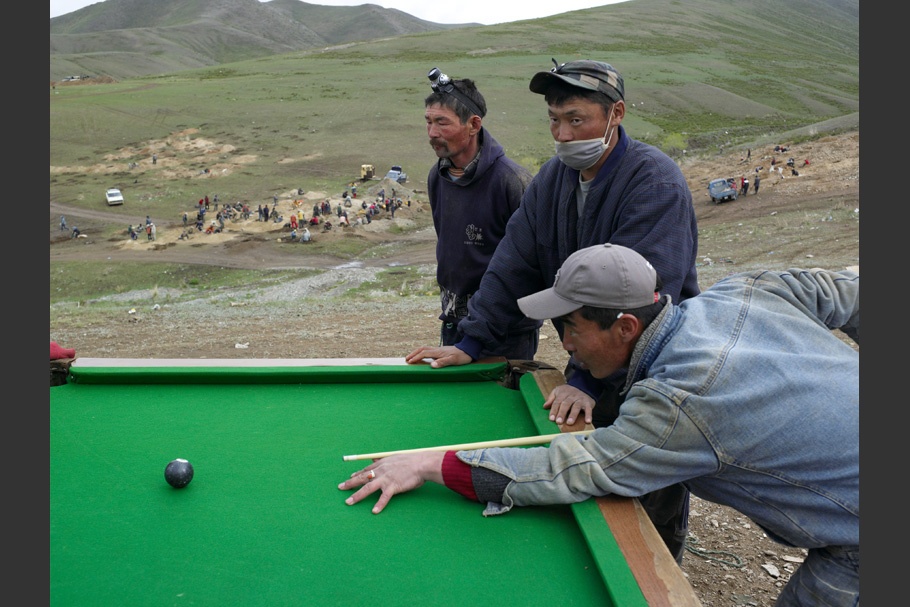 Men play pool at an improvised open air bar in Zamaar Valley, northeast of Ulan Bator, where dozens of Mongolians are panning for gold. 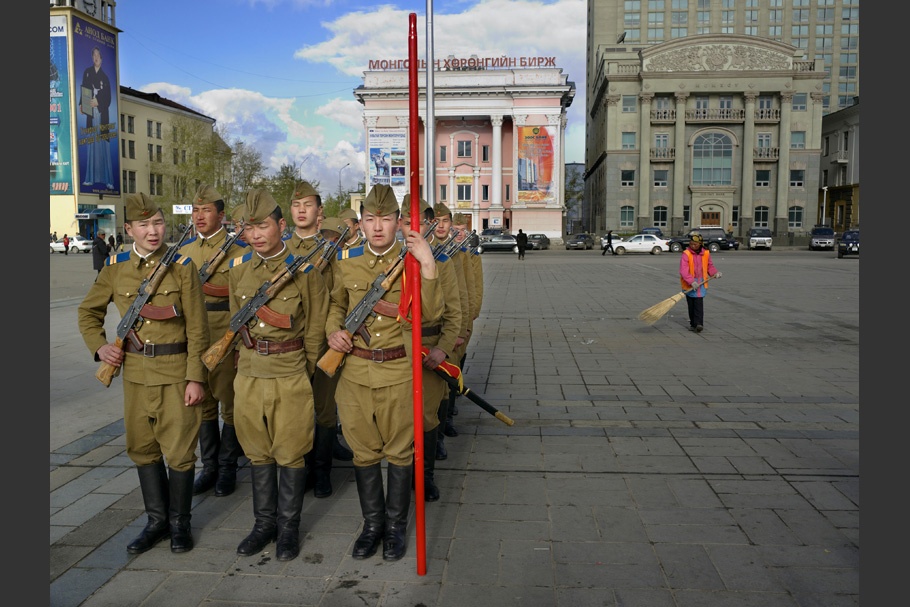 Soldiers parade in the main square of Ulan Bator. Although the capital still teems with Stalinist architecture and signs in the Cyrillic alphabet that Mongolia inherited from the Russians, the government has pledged that its Communist days are behind it. 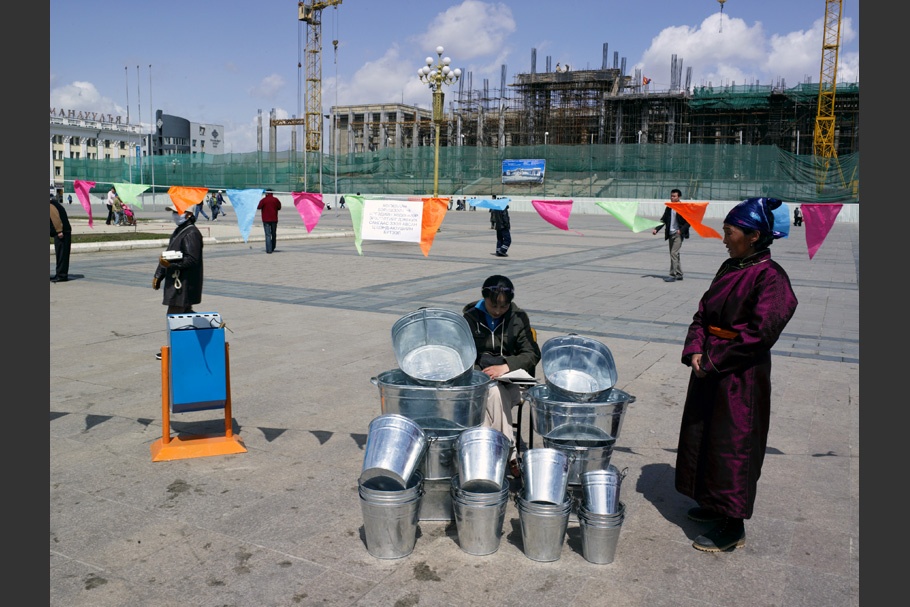 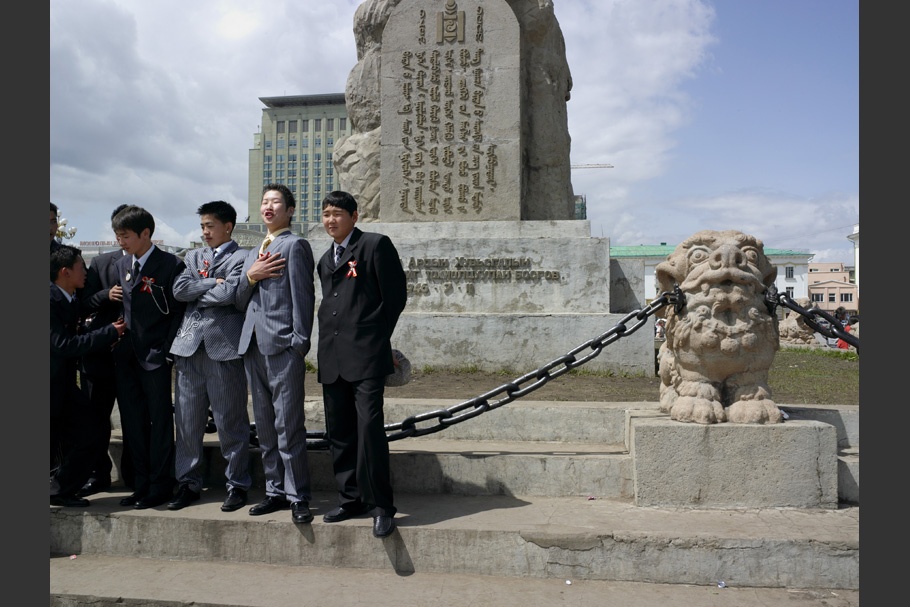 Mongolian boys dressed in their finest suits pose at the foot of the statue of Mongolian revolutionary leader Damdiny Sühbaatar in Ulan Bator’s main square. 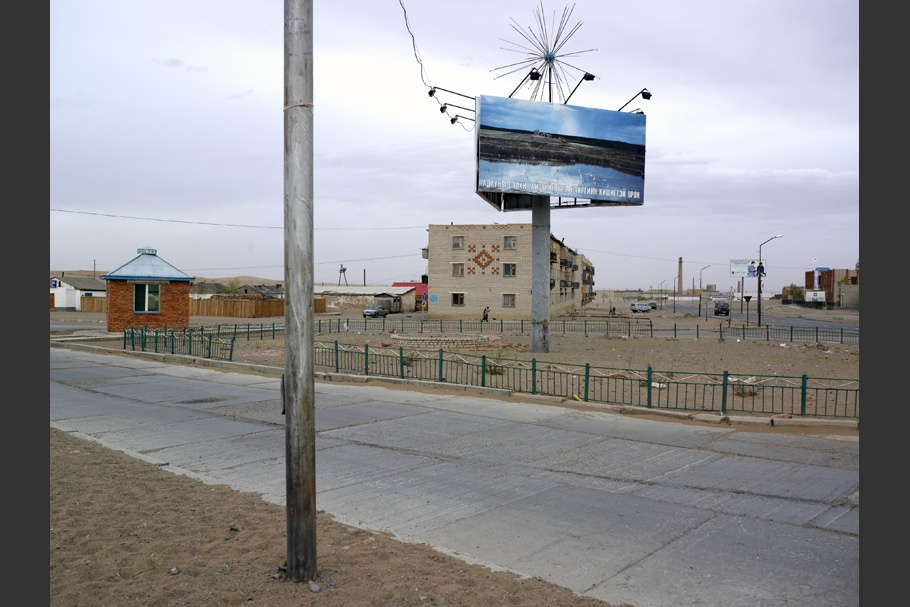 In the dusty outpost of Tsogt-Ovuu, billboards spring up on otherwise empty streets, promising newfound prosperity in the Gobi desert. 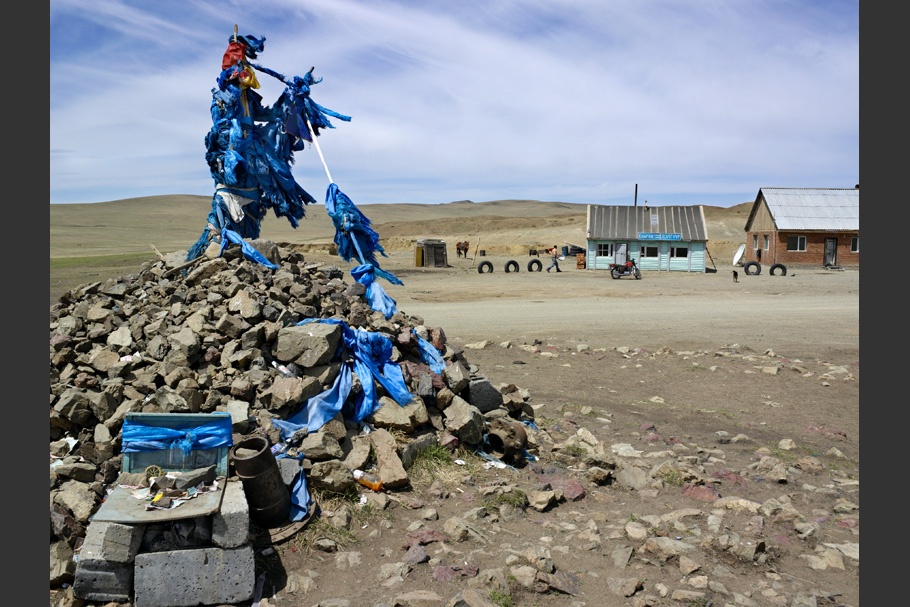 Prayer flags blow in the wind at a cairn on the Mongolian steppe. While Mongolia’s horses may give way to motorcycles, and its nomadic traditions may be replaced by gold prospecting, change will likely come slowly to the empty landscape that makes up much of the country. 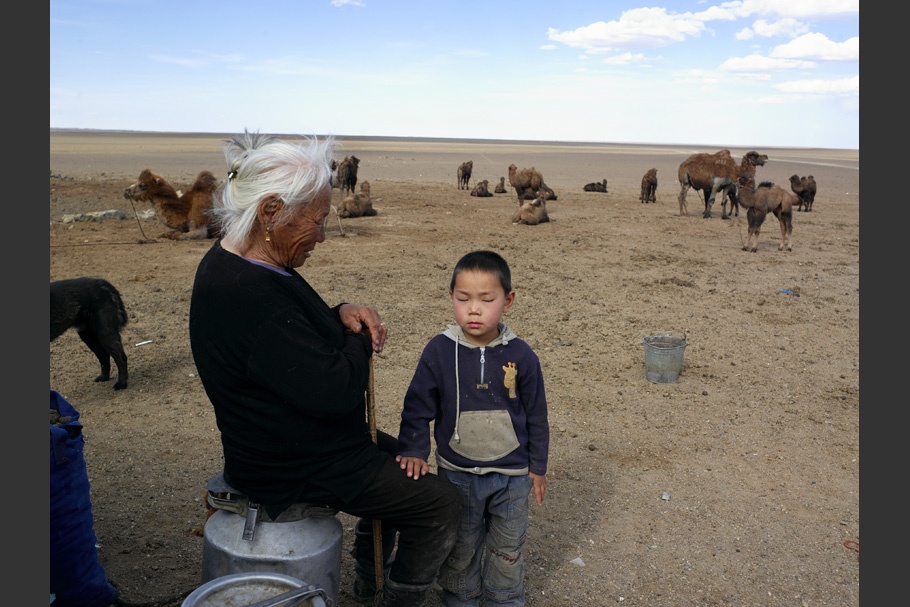 A woman and her grandson in the Gobi Desert. Many worry that the mining boom will forever erase the traditional nomadic way of life. 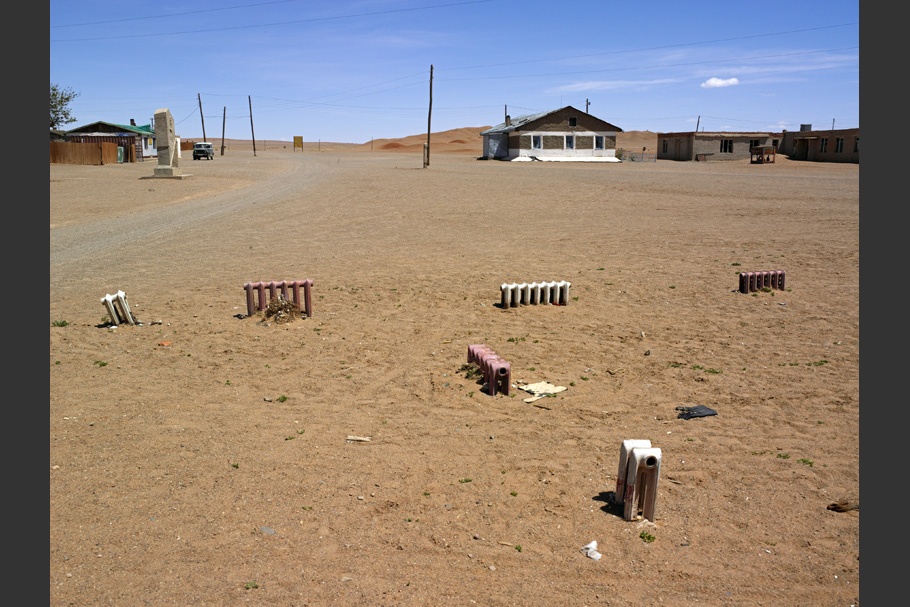 Half-buried radiators serve as hitching posts in the barren desert town of Mandalgov, where sand blows through deserted streets and a statue of Lenin still stands in the central park. 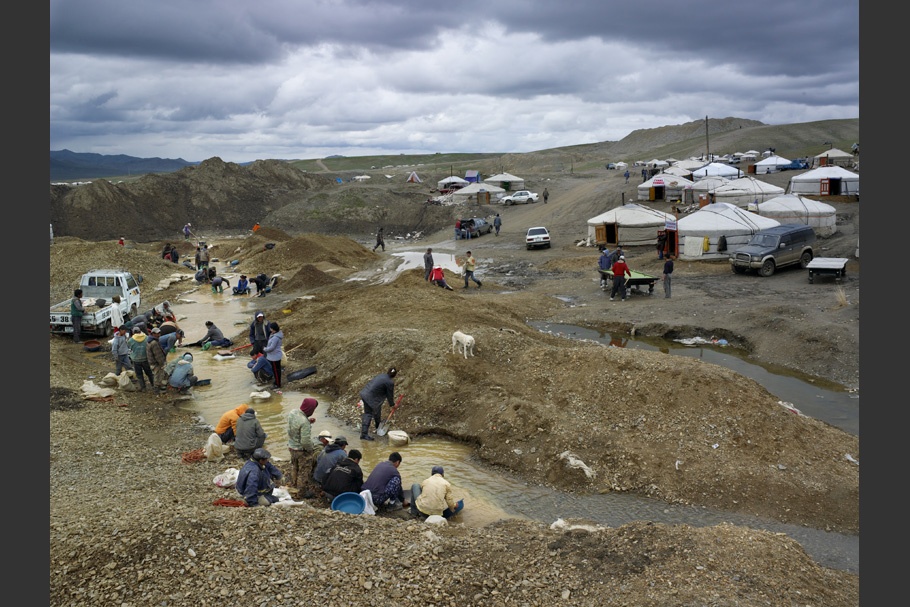 A traditional ger tent city springs up around a river in the Zamaar Valley, northeast of Ulan Bator, where dozens of Mongolians are panning for gold. A ger is a white tent that Mongolians have traditionally inhabited. 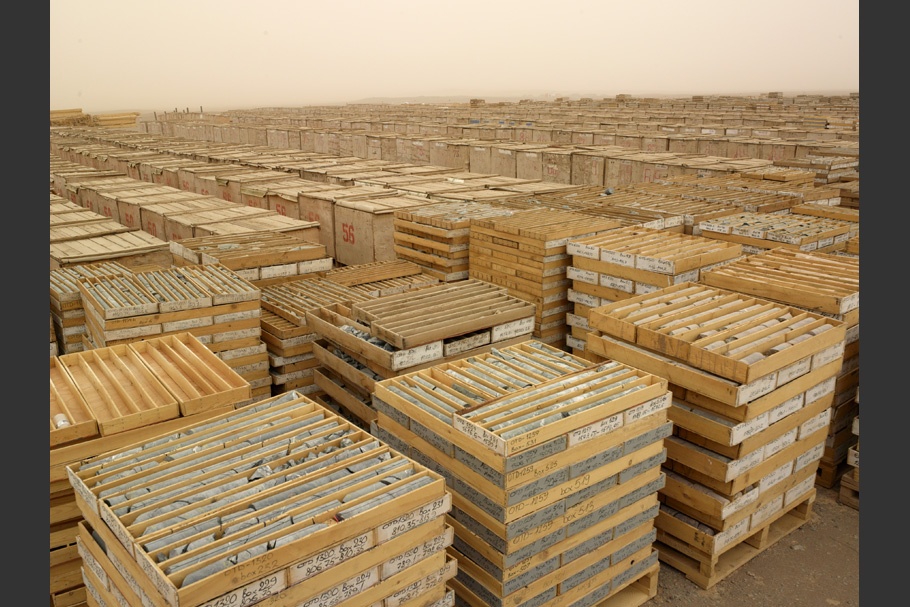 A vast field of crates holds samples and supplies for the Ivanhoe mine. While much of the land is still undeveloped and inhabited only by camels and scorpions, the mine’s boosters envision a future of high-rise apartments and five-star hotels—all paid for by the riches underground. 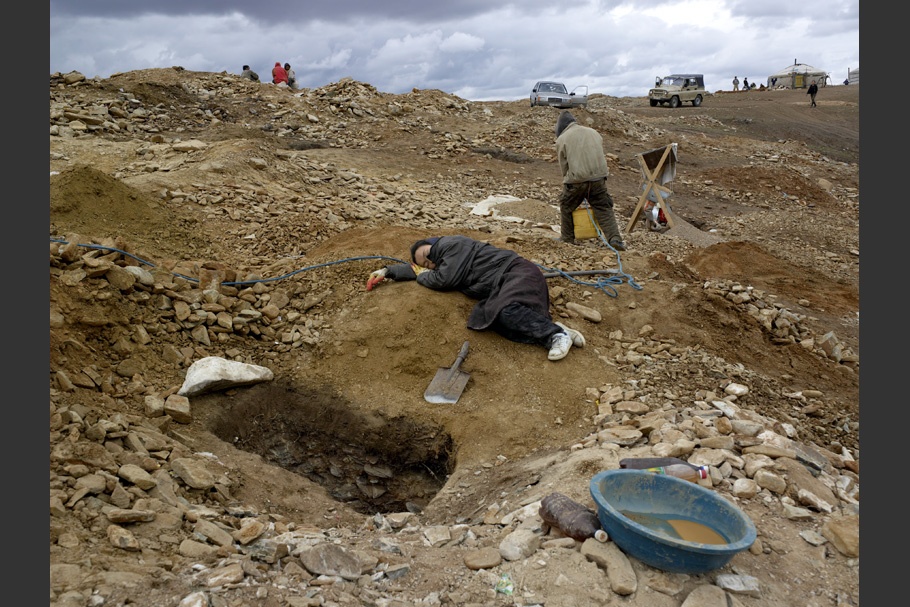 Wrapped up for protection from the swirling sands, a gold prospector takes a break besides his gold mine and plastic pan. The work is grueling and long—10 hour days of backbreaking labor are the norm—but many say that the country’s dearth of jobs makes prospecting the best option available.

Carl De Keyzer likes to tackle large-scale projects. A basic premise of much of his work is that, in overpopulated communities everywhere, disaster has already struck and infrastructures are on the verge of collapse.

De Keyzer started his career as a freelance photographer in 1982 while supporting himself as an instructor at the Royal Academy of Fine Arts in Ghent, Belgium. At the same time, his interest in the work of other photographers led him to cofound and codirect the XYZ-Photography Gallery. A Magnum nominee in 1990, he became a full member in 1994.

He has received several awards, including the W. Eugene Smith Award, and his work is included in the collections of the J. Paul Getty Museum and the International Center of Photography, among others.

Beneath a remote stretch of the Gobi Desert in Mongolia’s south, called Oyu Tolgoi, is one of the largest copper and gold deposits ever discovered. Canada-based Ivanhoe Mines, which possesses the rights to mine it, estimates the deposit is worth $38 billion. In contrast, the entire GDP of Mongolia is just $1.9 billion. Oyu Tolgoi is an outpost of makeshift offices and humble gers—the traditional white tents Mongolians have inhabited for millennia. But during the mine’s lifespan—at least 35 years, probably more—the company envisions the area as a thriving industrial center, with high-rise apartments, five-star hotels, broadband Internet, and an international airport. Mongolia may well be the world’s new El Dorado. It’s not just Oyu Tolgoi, and it's not just copper and gold. Mongolia could be harboring a host of other valuable metals, as well as coal.

Mongolia has little else to offer the global economy beyond its mineral wealth. Much of this boundless country is completely undeveloped, with no industry, towns, even paved roads. Many people—about 40 percent of the population—still lead the nomadic lives of their distant ancestors, roving among the pastures with their herds of cattle, yaks, camels, sheep, and horses. Though mining has been an important part of the economy for decades—it already accounts for 20 percent of GDP and 70 percent of exports—the scale has been too small to do much to alleviate the country’s poverty. Three-fourths of the population lives on $2 a day or less. The capital, Ulan Bator, is notorious for its nearly 4,000 street children, some of whom survive subzero winters inside the city’s sewers. Surrounding the city are informal settlements called “ger districts,” where unemployed citizens set up their tents hoping—but often failing—to find jobs.

Instead of elation, however, the buried treasure has generated controversy. A national debate is raging over how mining should—and shouldn’t—change Mongolia. Emerging from isolation after decades of communist rule, Mongolia today is experimenting with democracy, enjoying an explosion of civil society, and tapping into the world economy to a greater degree than it ever did in the past. Mining can impact all of this: It can strengthen Mongolia’s nascent pluralism, or contort the government into a corrupt kleptocracy; develop the entire country, or enrich only a handful; give Mongolia control over its own destiny, or make it a victim of erratic, insensitive global markets.

Unfortunately, there is little to guide Mongolia through this complex transition. Most developing countries with economies dependent on natural resources have miserable economic and political histories. Some, like the Democratic Republic of the Congo, deteriorate into chaos. The Mongolians realize that decisions made now could determine the future of their society for generations.

Excerpted from Michael Schuman’s article “Mongolia: The New El Dorado” for the Asia edition of Time, published on July 31, 2006.