Through Darkness to Light: Seeking Freedom on the Underground Railroad 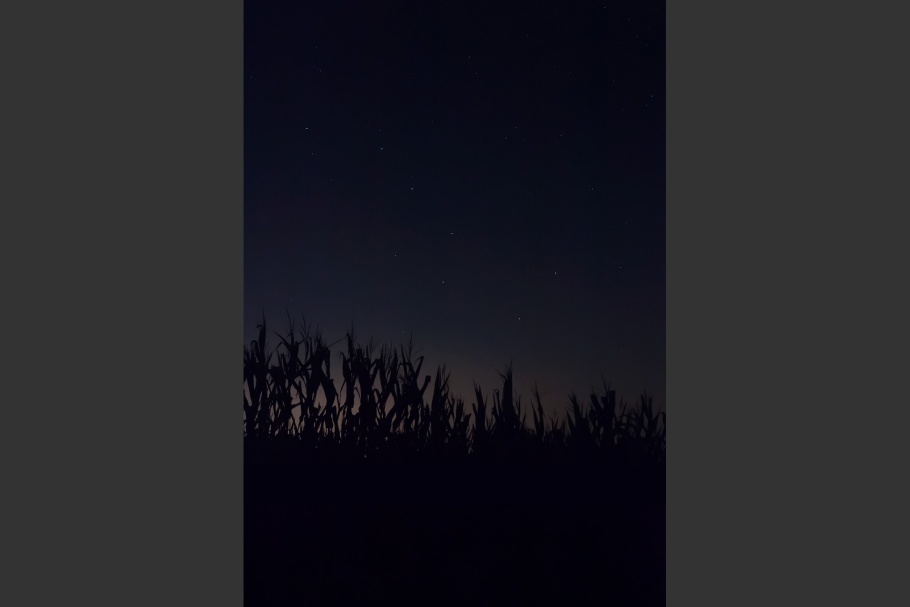 “For the old man is a-waiting for to carry you to freedom / If you follow the drinking gourd.”
—lyrics from a spiritual gospel about the Big Dipper, which points to the North Star 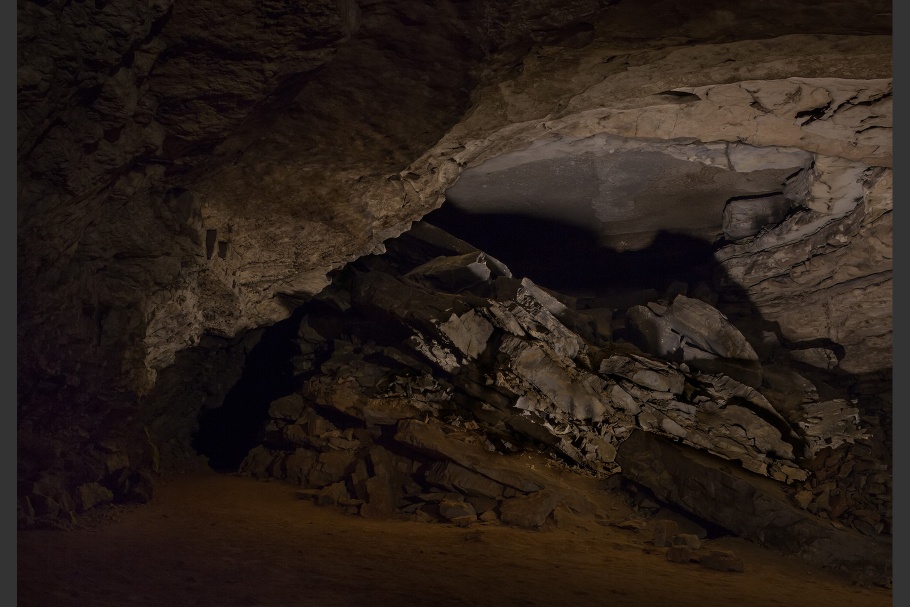 The Mammoth Cave system is the longest-known cave network in the world and was explored in the mid-19th century by Stephen Bishop, a man enslaved by the owners of the land, who gave guided tours of the caves. Bishop’s wife and son were sold away from him, and yet the fact that he remained at the cave has led some to speculate whether it was to help others who were attempting to escape slavery. At the start of their trip and along the way, those seeking freedom were at times guided by family members and other enslaved people. 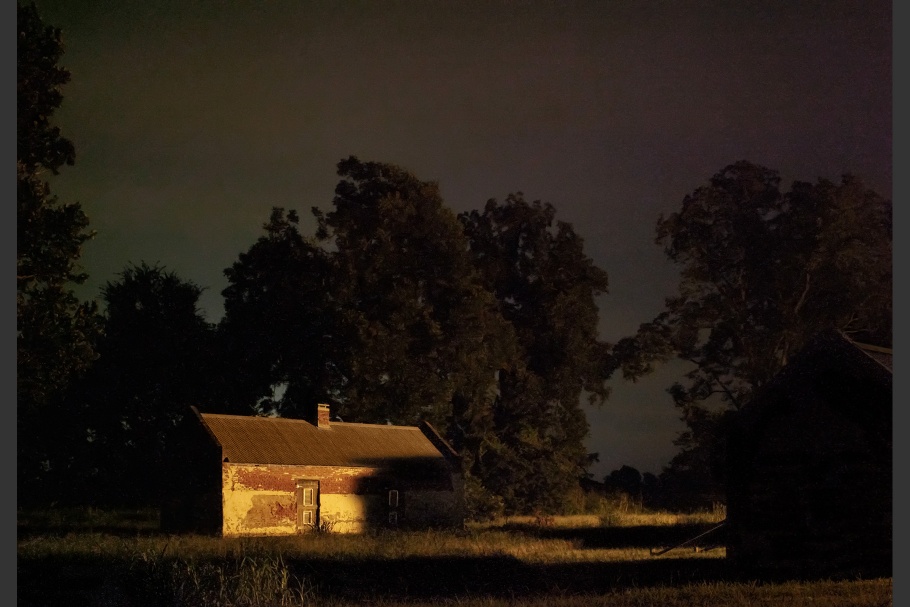 Decision to Leave
A building on Magnolia Plantation by the Cane River in Louisiana, United States, 2013

“They worked me all de day / Widout one cent of pay / So I took my flight in the middle ob de night / When de moon am gone away.”
—chorus of a song from abolitionist George W. Clark’s The Liberty Minstrel (1844)

At the height of its cotton production in the mid-19th century, Magnolia Plantation used the forced labor of over 250 enslaved men, women, and children. 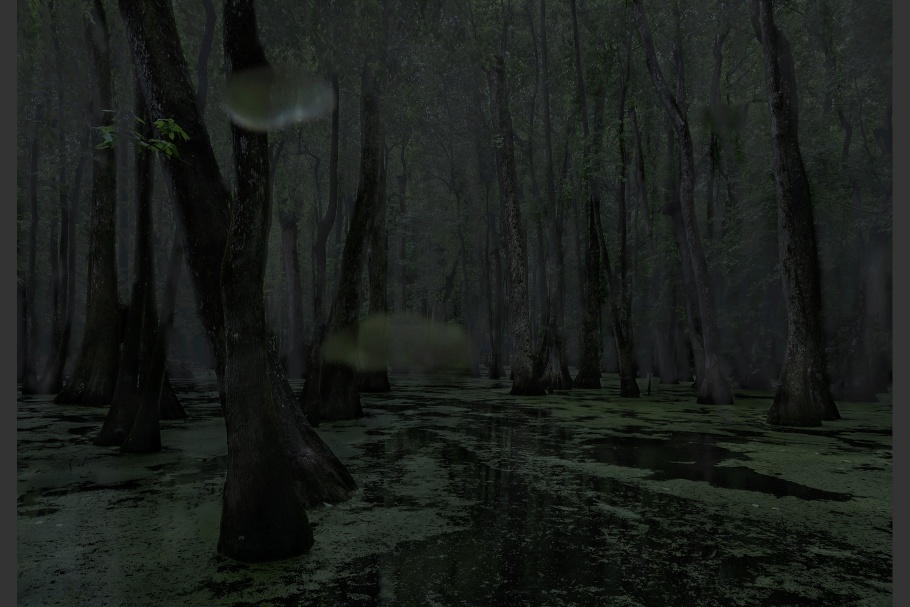 The Natchez Trace was a well-traveled trail by the mid-19th century. A freedom seeker might roughly follow its path leading north from Mississippi to Tennessee, while also staying safe by remaining unseen in the surrounding swamp areas. 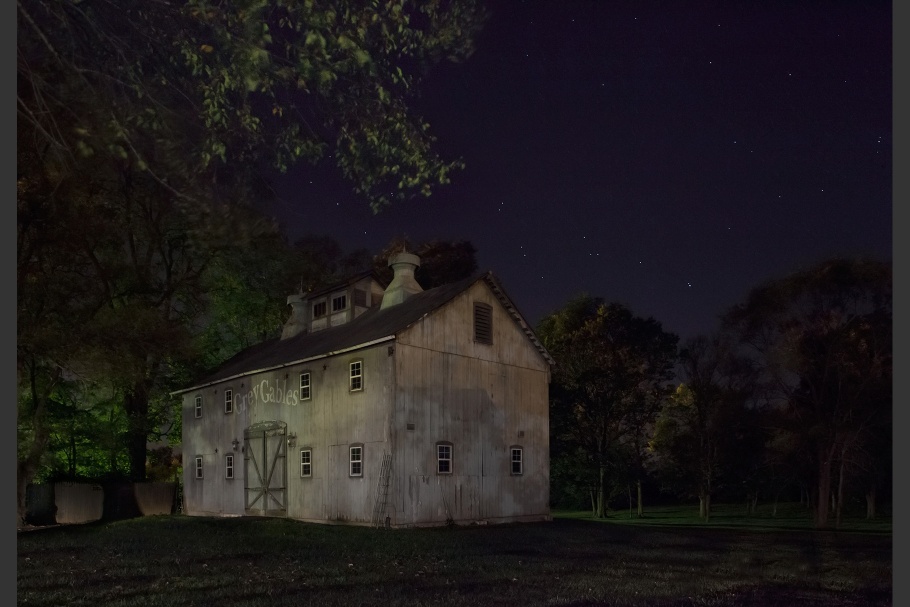 Look for the Grey Barn Out Back
An Underground Railroad station with a tunnel leading to another conductor’s house in Centerville, Indiana, United States, 2013

Underground Railroad “conductors” were guides who led fugitives out of slave states and/or aided them through free states. 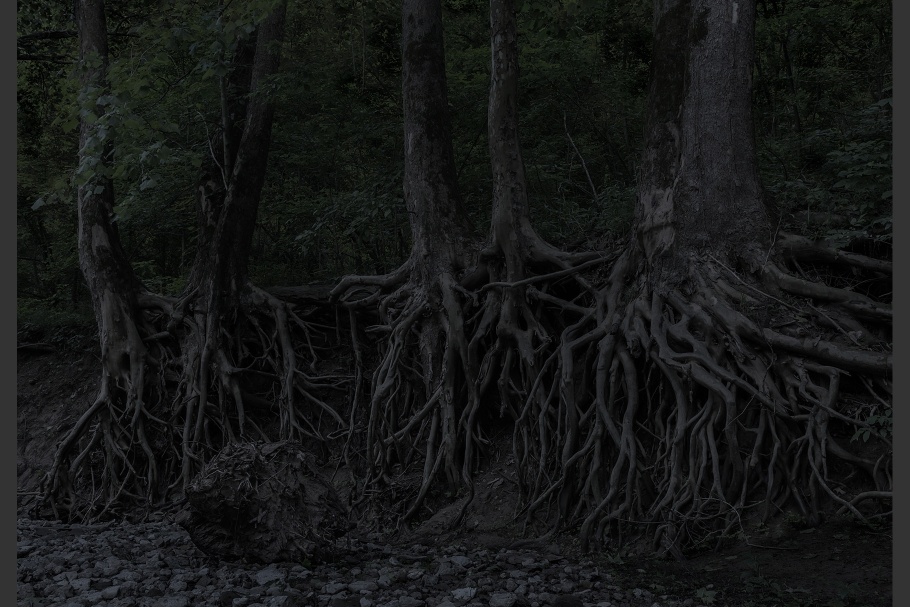 Hunter’s Bottom
Trees near the banks of the Ohio River, outside Madison, Indiana, United States, 2014

“After dark I drove to the place agreed upon to meet in a piece of woods one mile from the town of Wirt. I had been at the appointed place but a very short time when Mr. DeBaptiste sang out, ‘Here is $10,000 from Hunter’s Bottom tonight.’ A good negro at that time would fetch from $1,000 up. We loaded them in … and started with the cargo of human charges towards the North Star.”
—excerpt from Reminiscences of Slavery Times (1888), an unpublished chronicle by abolitionist John H. Tibbets, recounting his first encounter with the Underground Railroad after moving to Indiana

George DeBaptiste was a prominent African American abolitionist born to free parents in 1815. Among a lifetime of acts dedicated to anti-slavery, he is said to have briefly used boats on the Ohio River, and later on the Detroit River, to secretly usher enslaved people further in their journeys toward freedom. 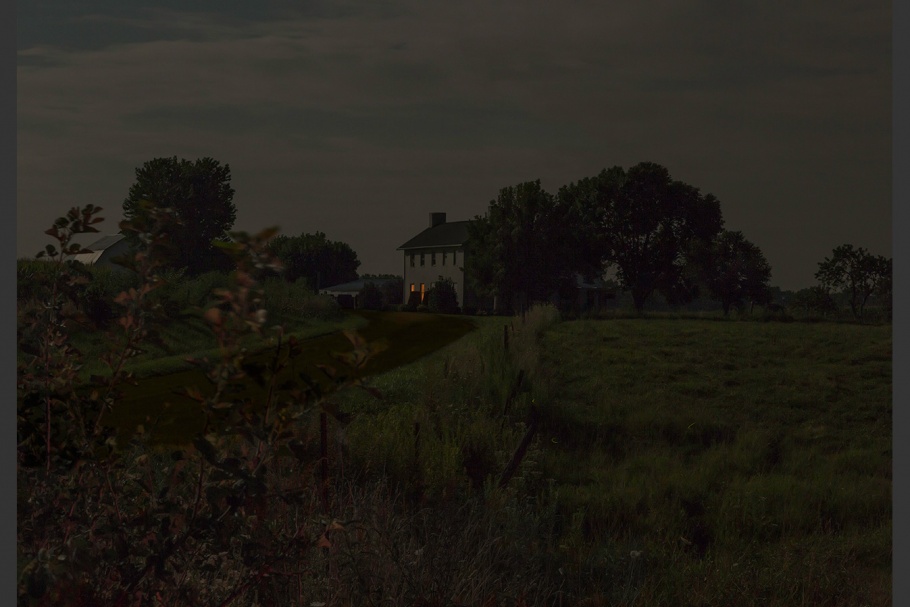 William Beard was a white abolitionist who is said to have contributed to the Underground Railroad in collaboration with prominent advocate Levi Coffin and the Henry County Female Anti-Slavery Society. 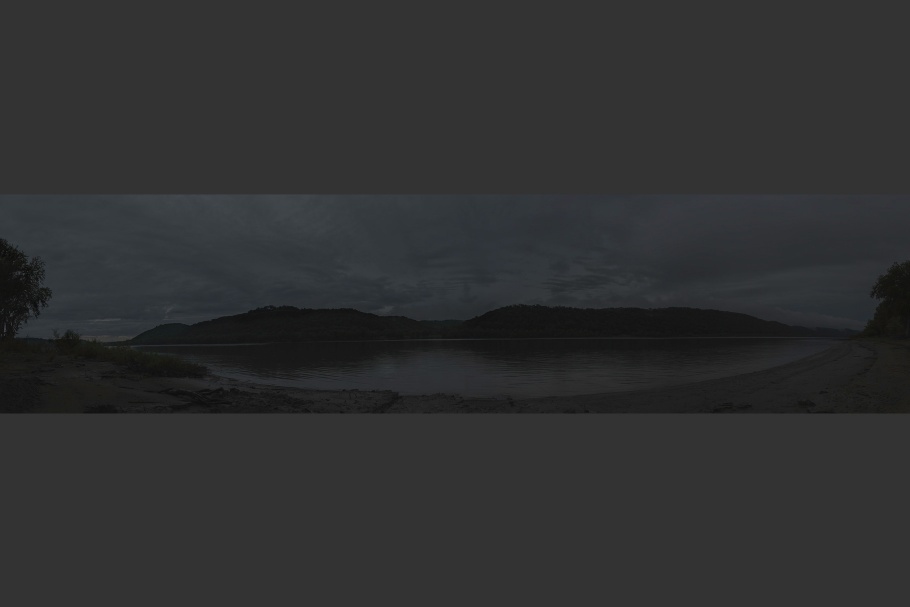 The Ohio River provided one pathway to freedom, but people resisting enslavement did not all travel the same path: some, especially those in the Upper South, traveled toward northern U.S. states or to Canada; others in Arkansas, Louisiana, and Texas could escape north into Indian Territory; some traveled west toward the frontier or south to Mexico; while others formed maroon communities, organized enclaves that were established—at times not far from the plantations they fled—in dense forests, bayous, swamps, or Indian territories. 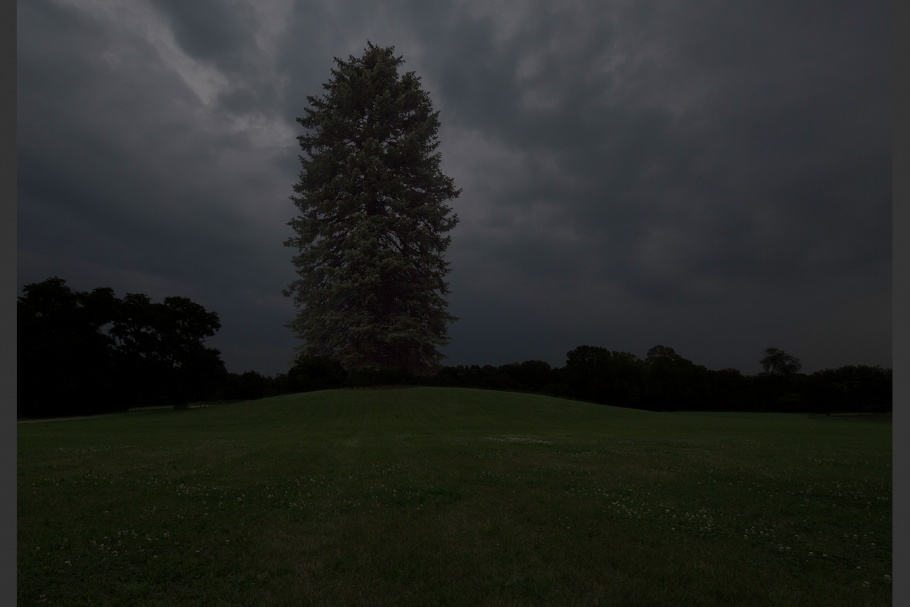 The husband and wife who owned Spring Hill Farm in the late 19th century arranged to have a massive cedar tree on their property uprooted and planted on top of a hill. From there the tree could be seen from a great distance and became known as “the beacon tree.” Although the original tree no longer stands, this image imagines that landmark—and others like it—created to be used as secret reference points for those pursuing freedom along the Underground Railroad. 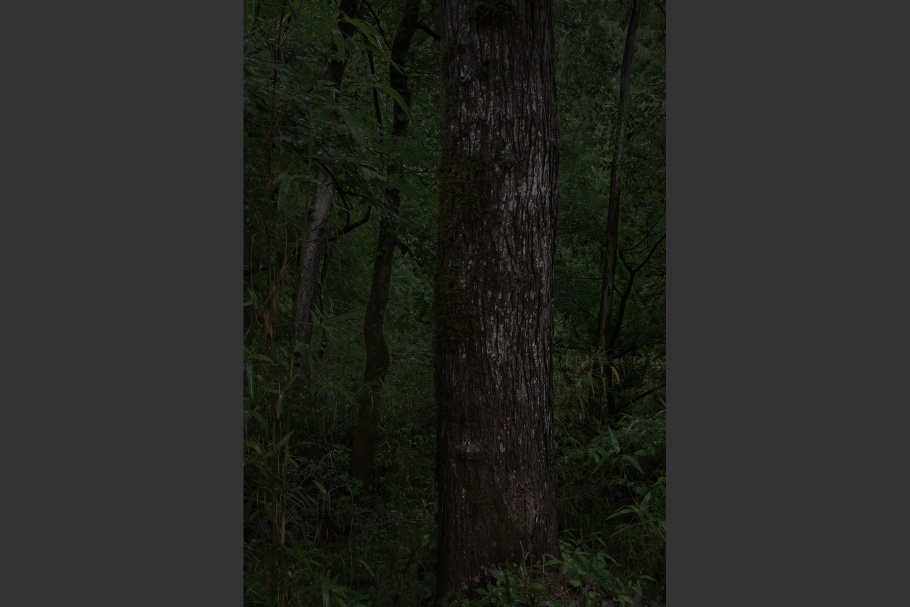 Determining True North in the Rain
Along the southern part of the Old Natchez Trace in Mississippi, United States, 2014

Some sources say that one of the many navigational clues used by people seeking to escape slavery and head north was that moss grew on the northern side of trees.

Jeanine Michna-Bales’s (American, b. 1971) work explores the relationships between what has occurred or is occurring in a society, and how people have chosen to react to those events. Michna-Bales meticulously researches each topic—considering different viewpoints, causes and effects, and political climates—and often incorporates found or archival text and audio.

Whether exploring the darkened stations along the Underground Railroad, long-forgotten nuclear fallout shelters, or the invisible epicenters of environmental turmoil, her work seeks out places that are hidden in plain sight.

Images from her series about the Underground Railroad have appeared in group shows around the United States, including Southern Exposure: Portraits of a Changing Landscape at the Museum of Contemporary Art Jacksonville, and have been published by GEO Histoire, Harvard University’s Transition magazine, and WIRED Raw File. In 2014, she was named to the Photolucida Critical Mass Top 50. Her forthcoming book, Through Darkness to Light, will be published by Princeton Architectural Press in February 2017.

In the 19th century, an estimated 50,000 enslaved African American men, women, and children embarked on the journey to escape bondage every year. Taking great risks, they moved in constant fear of being discovered. Some were killed, while most were captured—or returned on their own—and severely beaten as an example of what would happen to others who might choose to flee.

These “fugitives” carefully planned their escapes and displayed a great deal of resourcefulness, fortitude, and ingenuity. Occasionally, they were guided from one secret location to the next by an ever-changing, clandestine group of anti-slavery advocates—which included free blacks, successful former runaways, and black and white abolitionists—known as the Underground Railroad. At the start of their trip and along the way, they were also aided by family members and other enslaved people. This series of photographs envisions what the long road to freedom may have looked like as seen through the eyes of someone making this epic journey.

Using newspaper clippings, books, period documents, personal narratives, and existing research made available to me by the Indiana Historical Society, the National Underground Railroad Freedom Center in Cincinnati, Ohio, and the Freedom Trails Commission, among others, I envisioned one possible route of escape along the Underground Railroad—from a cotton plantation in Louisiana all the way north to Canada.* I also relied on local lore, interviewing people in communities where it was rumored that stops on the Underground Railroad existed.

The unnumbered routes of the Underground Railroad encompassed countless square miles and paths through many states. The particular path I constructed runs roughly 2,000 miles and depicts sites, cities, and places that freedom seekers passed through—or may have passed through—during their journey.

The Underground Railroad was a loose network of people—from white and black abolitionists and religious groups to female anti-slavery societies and everyday people—who were all working towards a common cause. I believe an appreciation and understanding of this history can inspire and remind us of how diverse groups of people can play a role in challenging and resisting social injustices today.

*The particular path that the artist envisioned was very rare. Few people escaped from the Deep South to the North, and even fewer to Canada.