Life in the Caucasus: A Bittersweet Decade 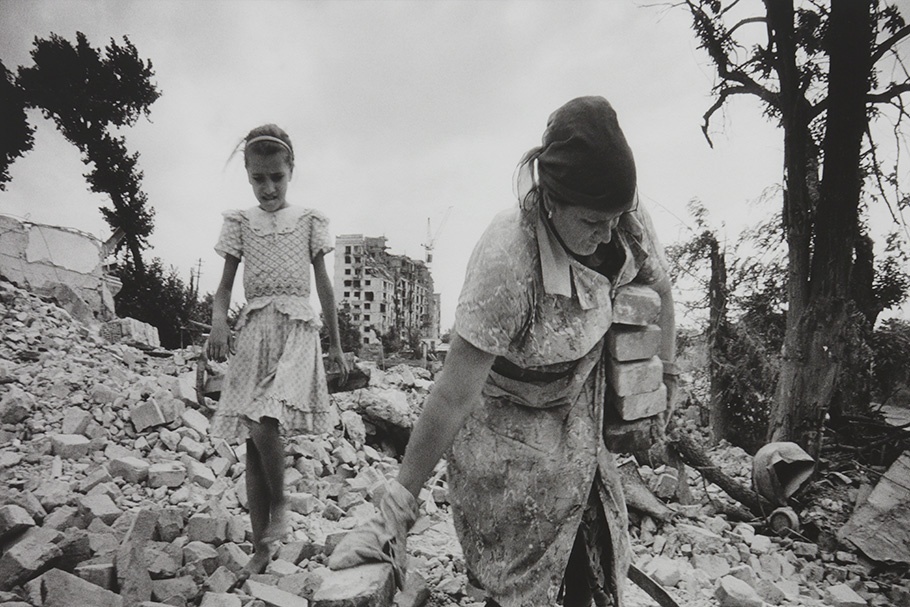 A mother and daughter collect bricks in central Grozny from the remains of a 19th century building destroyed in the war. The bricks from old buildings are well-made, and people scurry to collect them. They sell these solid, old bricks to other Chechens who are rebuliding their homes. This is their only source of income.

Heidi Bradner was born and raised in Alaska. She started doing freelance writing and photography as a student for the Juneau Empire, the Anchorage Daily News, and various other Alaska publications while completing her history and journalism degrees at the University of Alaska-Anchorage.

After graduating, Bradner began to photograph in Eastern Europe and the Soviet Union. Based in Moscow from 1991 to 1997, Bradner documented the changes and paradoxes of the turbulent post-Soviet years. In recent years, as conflict in the region grew, she has been shooting in Chechnya and the Caucasus.

Bradner is the recipient of the Leica Medal of Excellence, the Mother Jones International Fund for Documentary Photography Grant, and the Alexia Foundation Photography Grant, Syracuse University, as well as many other prizes and awards. Now based in London as an independent photographer, Bradner continues to work on projects in Russia, Central Asia, and the Caucasus.

The Caucasus have captivated me since I first arrived in the former Soviet Union almost a decade ago just in time to see the Soviet world collapse like a house of cards and the republics of the Caucasus become independent countries.

Over the years, I have come to know the Caucasus as a crossroads of culture and ideas between the Islamic and Christian worlds, Europe and Asia, Slavic Russia and the Middle East. The rugged Caucasus mountains, stretching from the shores of the Black Sea to the Caspian Sea, have fostered and protected an incredible concentration of cultures and religions, making it one of the most ethnically diverse areas in the world.

I have come to see the Caucasus as a complex and vulnerable region, experiencing needed change amid the turmoil of devastating instability. Today, in 2001, these newly emerging societies are perched on a tightrope, struggling for balance between the forces of war and peace, modern ways and ancient traditions, chaos and stability.

During the course of my work, I have tried to photograph the triumphs and many tragedies of this complicated and beautiful region. It has been a war-torn decade, replete with bloodshed and broken lives set against a wider picture of political and economic breakthroughs. The newly-built Transcaucasian oil pipeline, stretching from the Caspian Sea across Azerbaijan and Georgia to the Black Sea port of Supsa, reaching toward Europe and avoiding Russia, is a source of pride for the young, independent countries. While this newfound, newly managed oil wealth offers the promise of prosperity, it has already bred greater corruption and widened the gap between rich and poor.

Throughout the 1990s, while the wars between Azerbaijan and Armenia as well as Chechnya and Russia caught the world’s attention, many smaller and equally devastating conflicts broke out uncontrollably like forest fires. They ravaged people’s homes, lives, relationships with friends and neighbors and, ultimately, their futures. In 1999, a second Russia-Chechen war broke out, producing a conflict even deeper and more destructive than the first.

One of the dark legacies from these conflicts is the refugee crisis that cripples the region and stunts the lives of the younger generation. Families, with no way to go back home, live in neglected, polluted oil fields, in shantytowns, tent camps, and abandoned freight cars. They are in dire need of health care, jobs, and better education, yet they still dream of returning home. However, years of unresolved questions and divisive politics block any solution to their fate.

These photographs portray the lives of the people of the Caucasus in the 1990s. I hope they reveal the poignancy of this turbulent and painful decade in the region’s history.