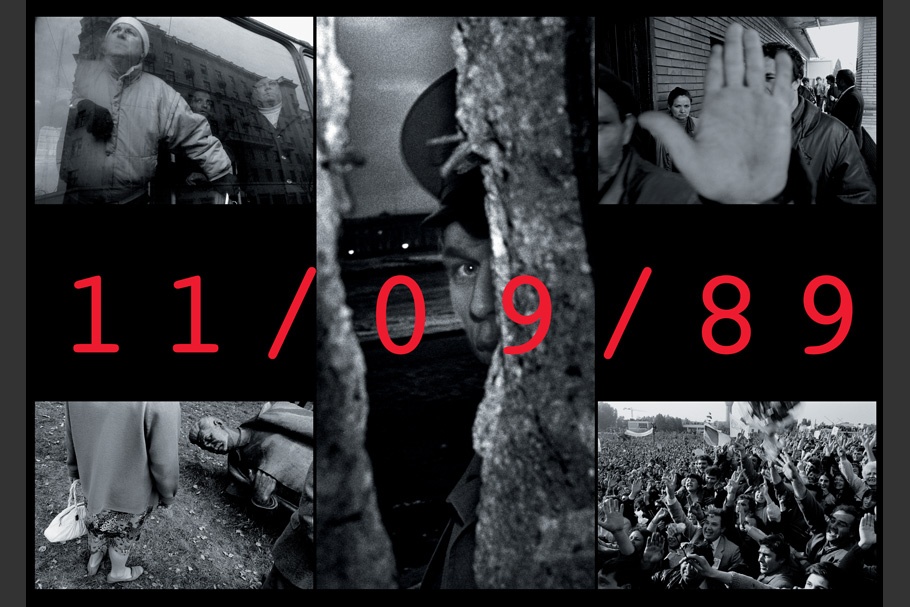 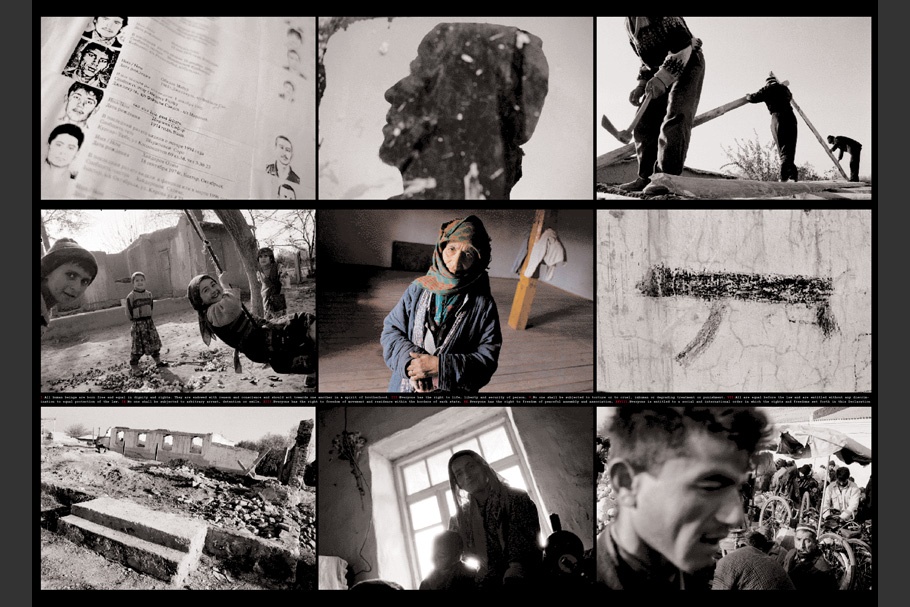 I. All human beings are born free and equal in dignity and rights. They are endowed with reason and should act towards one another in a spirit of brotherhood. III. Everyone has the right to life, liberty and security of person. V. No one shall be subjected to torture or to cruel, inhuman or degrading treatment or punishment. VII. All are equal before the law and are entitled without any discrimination to equal protection of the law. IX. No one shall be subjected to arbitrary arrest, detention or exile. XIII. Everyone has the right to freedom of movement and residence within the borders of each state. XX. Everyone has the right to freedom of peaceful assembly and association. XXVIII. Everyone is entitled to a social and international order in which the rights and freedoms set forth in this Declaration… 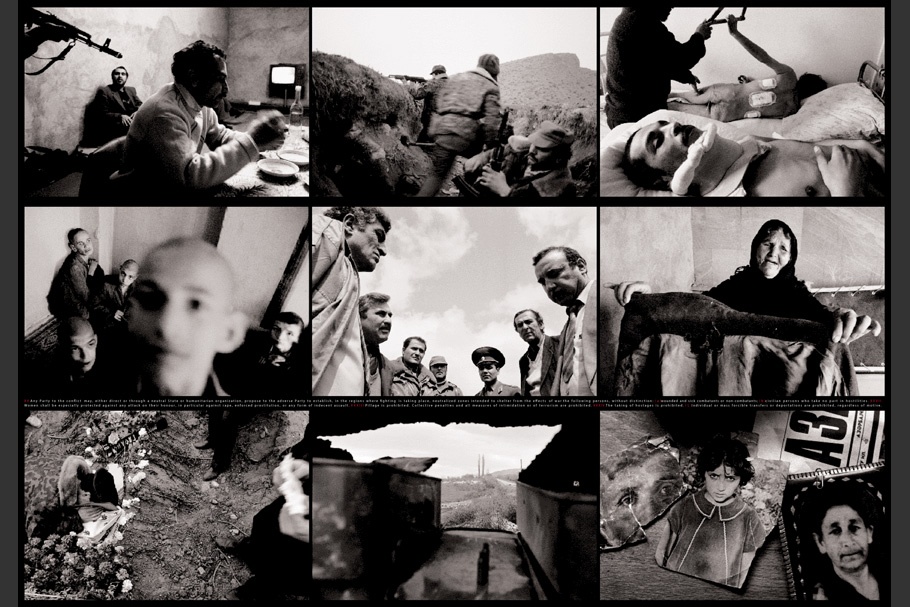 XV. Any Party to the conflict may, either direct or through a neutral State or humanitarian organization, propose to the adverse Party to establish, in the regions where fighting is taking place, neutralized zones intended to shelter from the effects of war the following persons, without distinction: (a) wounded and sick combatants or non-combatants; (b) civilian persons who take no part in hostilities. XXVII. Women shall be especially protected against any attack on their honour, in particular against rape, enforced prostitution, or any form of indecent assault. XXXIII. Pillage is prohibited. Collective penalties and all measures of intimidation or of terrorism are prohibited. XXXIV. The taking of hostages is prohibited. IL. Individual or mass forcible transfers or deportations are prohibited, regardless of motive. 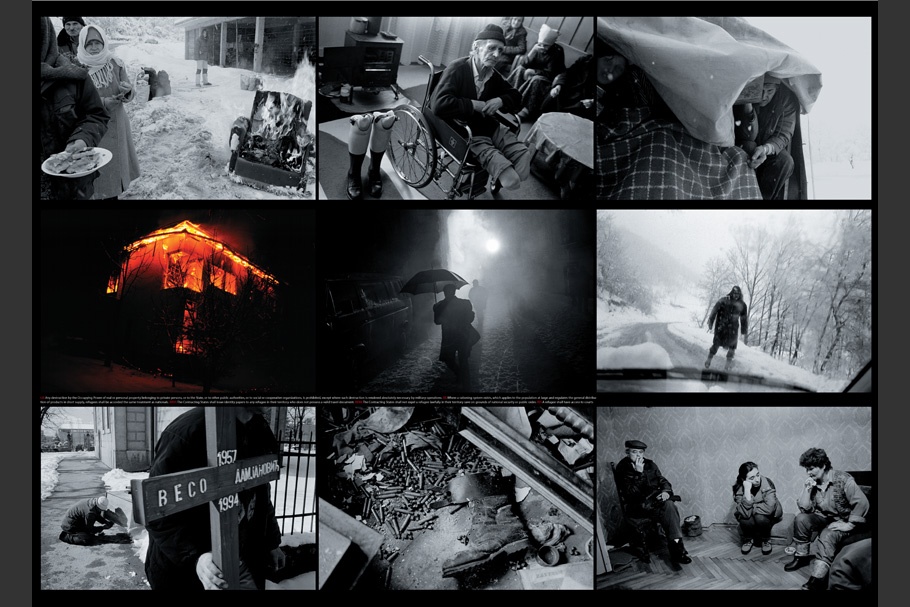 LIII. Any destruction by the Occupying Power of real or personal property belonging to private persons, or to the State, or to other public authorities, or to social or cooperative organizations, is prohibited, except where such destruction is rendered absolutely necessary by military operations. XX. Where a rationing system exists, which applies to the population at large and regulates the general distribution of products in short supply, refugees shall be accorded the same treatment as nationals. XXVII. The Contracting States shall issue identity papers to any refugee in their territory who does not possess a valid travel document. XXXII. The Contracting States shall not expel a refugee lawfully in their territory save on grounds of national security or public order. XVI. A refugee shall have access to courts… 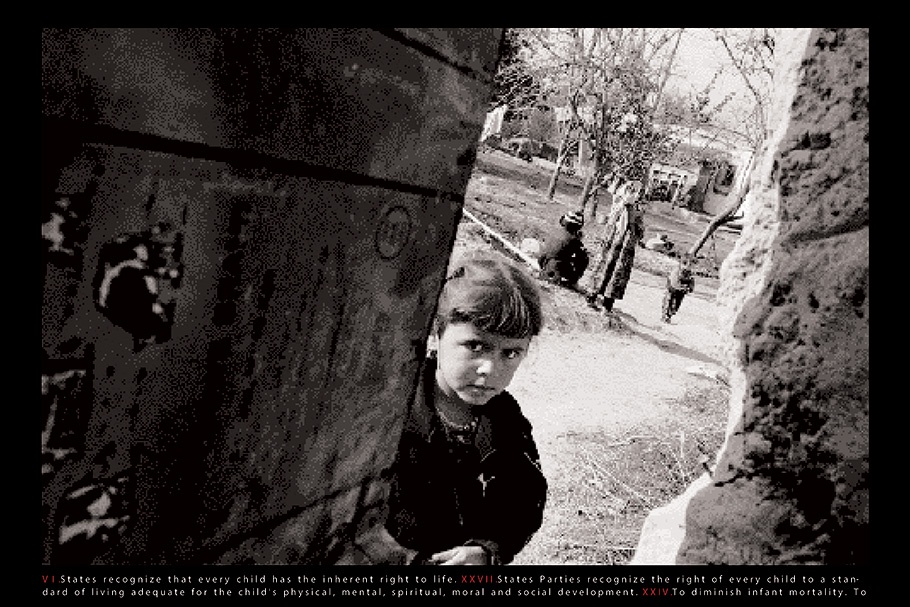 VI. States recognize that every child has the inherent right to life. XXVII. States Parties recognize the right of every child to a standard of living adequate for the child’s physical, mental, spiritual, moral and social development. XXIV. To diminish infant mortality. To… 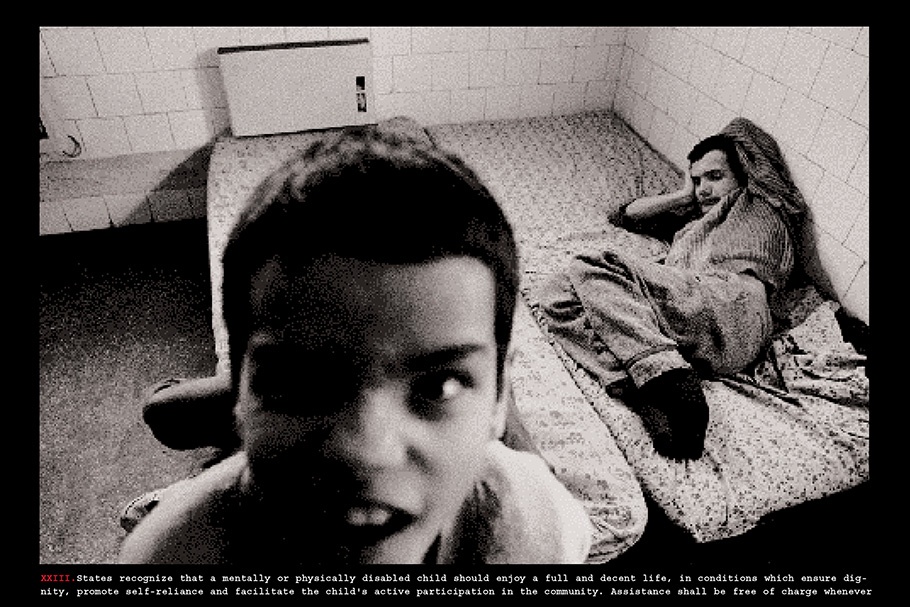 XXIII. States recognize that a mentally and physically disabled child should enjoy a full and decent life, in conditions which ensure dignity, promote self-reliance and facilitate the child’s active participation in the community. Assistance shall be free of charge whenever… 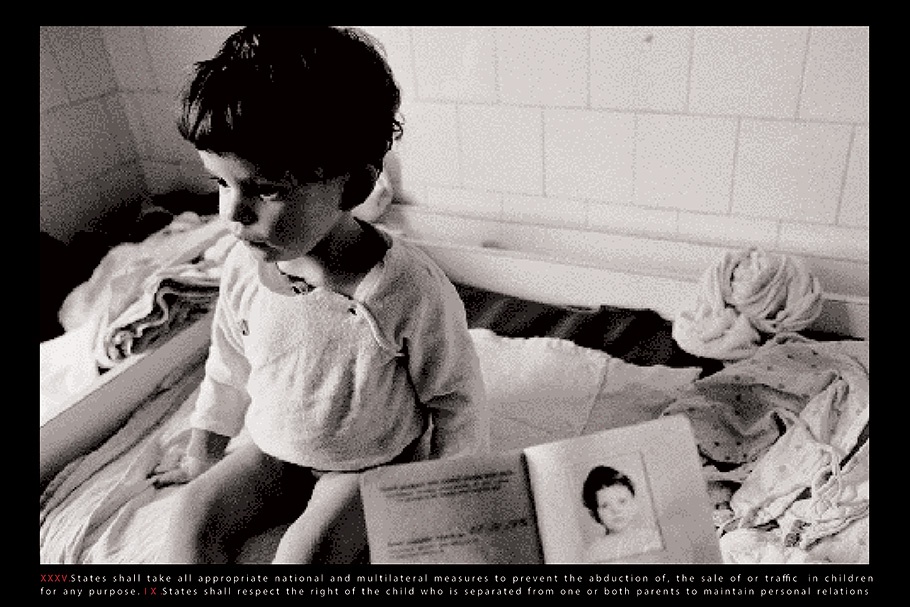 States shall take all appropriate national and multilateral measures to prevent the abduction of, the sale of or traffic in children for any purpose. IX. States shall respect the right of the child who is separated from one or both parents to maintain personal relations… 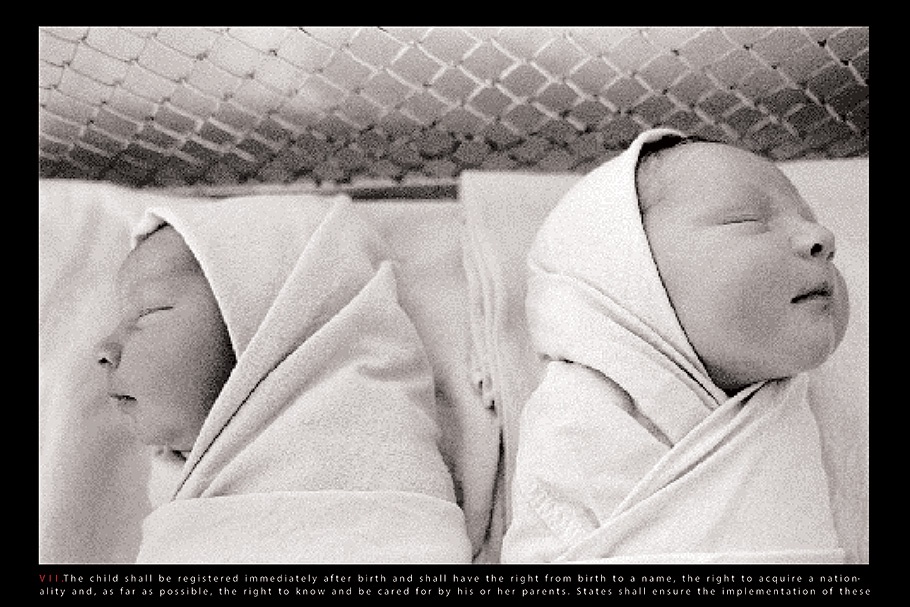 VII. The child shall be registered immediately after birth and shall have the right from birth to a name, the right to acquire a nationality and, as far as possible, the right to know and be cared for by his or her parents. States shall ensure the implementation of these… 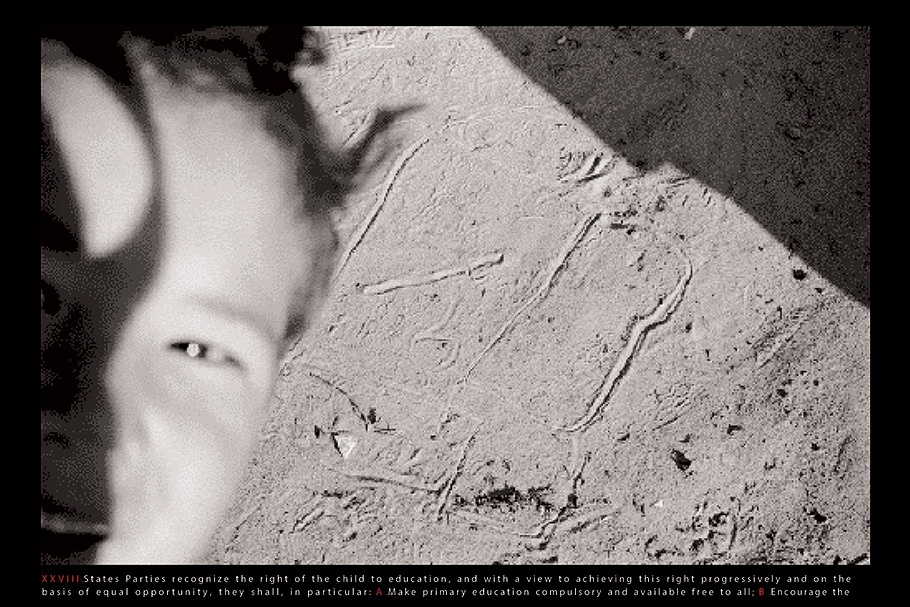 XXVIII. States Parties recognize the right of the child to education, and with a view to achieving this right progressively and on the basis of equal opportunity, they shall, in particular: A. Make primary education compulsory and available free to all; B. Encourage the… 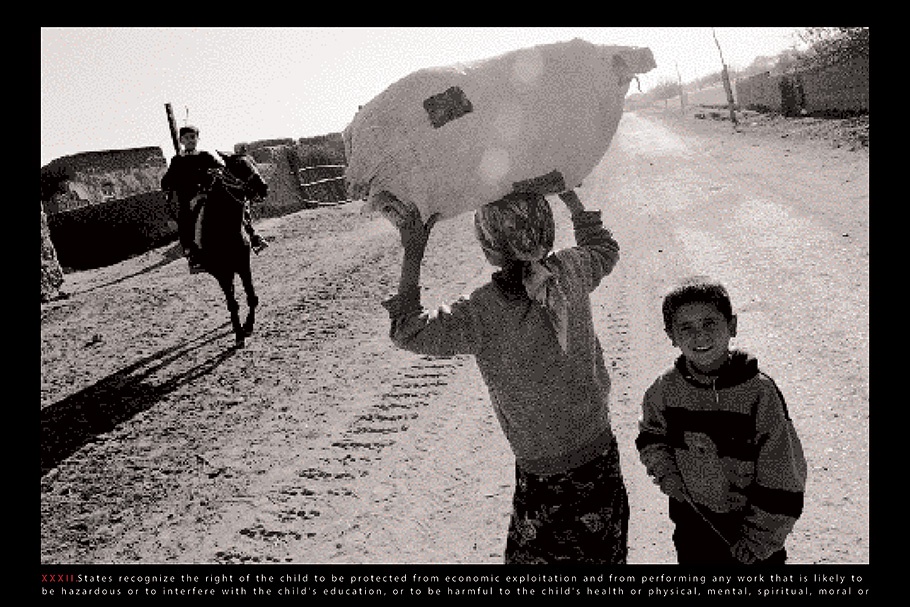 XXXII. States recognize the right of the child to be protected from economic exploitation and from performing any work that is likely to be hazardous or to interfere with the child’s education, or to be harmful to the child’s health or physical, mental, spiritual, moral or… 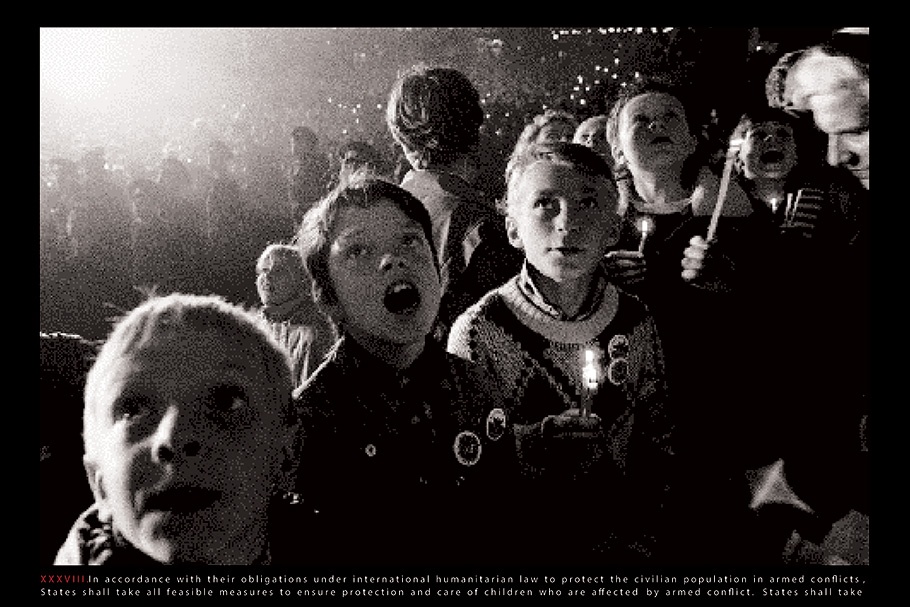 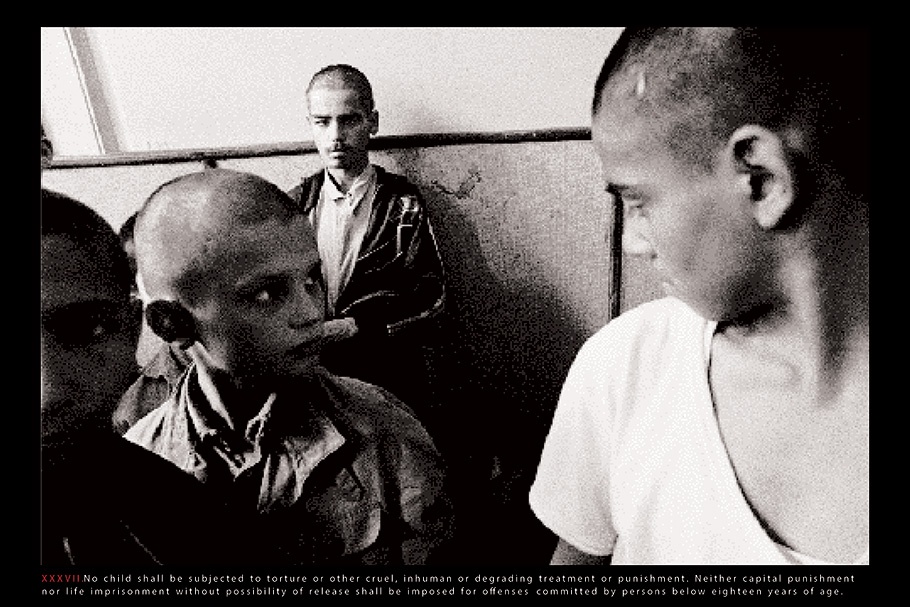 XXXVII. No child shall be subjected to torture or other cruel, inhuman or degrading treatment or punishment. Neither capital punishment nor life imprisonment without possibility of release shall be imposed for offenses committed by persons below eighteen years of age.

XIII. The child shall have the right to freedom of expression; this right shall include freedom to seek, receive and impart information / and ideas of all kinds, regardless of frontiers, either orally, in writing or in print, in the form of art, or through any other media.

James Nubile, a New York City-based photographer, has been a working photographer for more than 10 years. During his studies in Austria in 1984-85, he became fascinated with what lay behind what was then known as the “Iron Curtain.” Since then, his travels have taken him through Eastern Europe and the former Soviet Union, working on stories that document the events and challenges facing these nations in the post-Cold War world. As a news photographer, he has contributed to many national and international publications, reporting from Africa and the Middle East, as well as covering domestic stories on the social issues of the day. He is currently producing a documentary film titled From Mound Bayou to Lady Selbourne: Two Stories of Race and Identity.

The wave of freedom that washed over Eastern Europe with the opening of the Berlin Wall was both fast and remarkably bloodless. But as soon as the euphoria and the songs of celebration faded, long festering feelings of resentment and nationalism emerged. Economies were unmasked as bankrupt; the socialist myth of the workers paradise was stripped naked. New countries were born almost weekly, and regional and civil conflicts erupted. The largest political shift the modern world had ever known was under way.

No doubt the vast majority of the millions of people of Eastern Europe and the former Soviet Union would not turn the clock back, but at the same time most probably did not think the transition to a civil and functioning society would command such a heavy price: hundreds of thousands dead, millions of refugees, shell-shocked populations, and a generation of children that know only conflict.

Articles from the Geneva Conventions accompany the images as a subtext. These conventions, while the cornerstone of international law, are often ignored in the face of naked aggression, with the community of nations standing by, a reluctant witness.