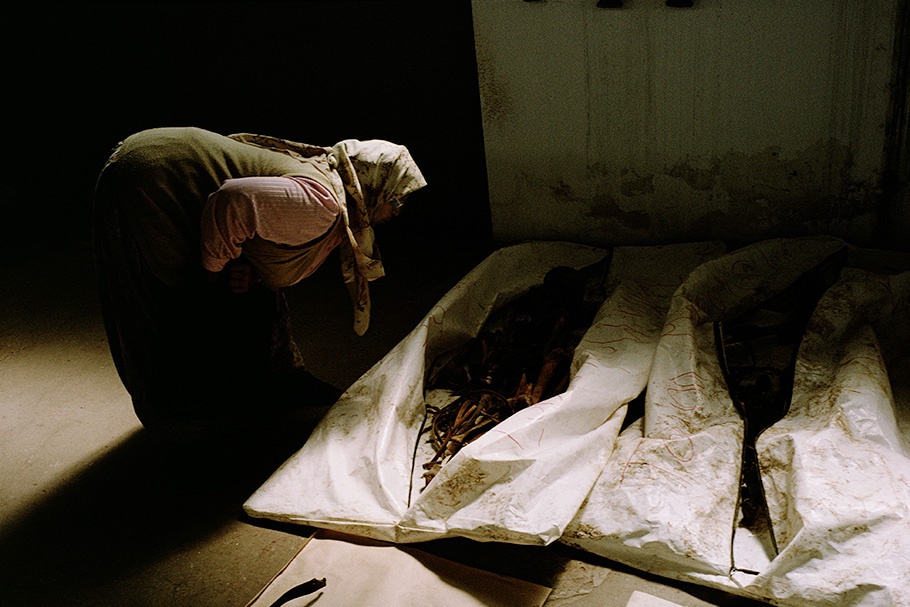 A Muslim widow examines the remains of recently exhumed victims of the 1992 ethnic cleansing campaign by Serbs against their Muslim neighbors. 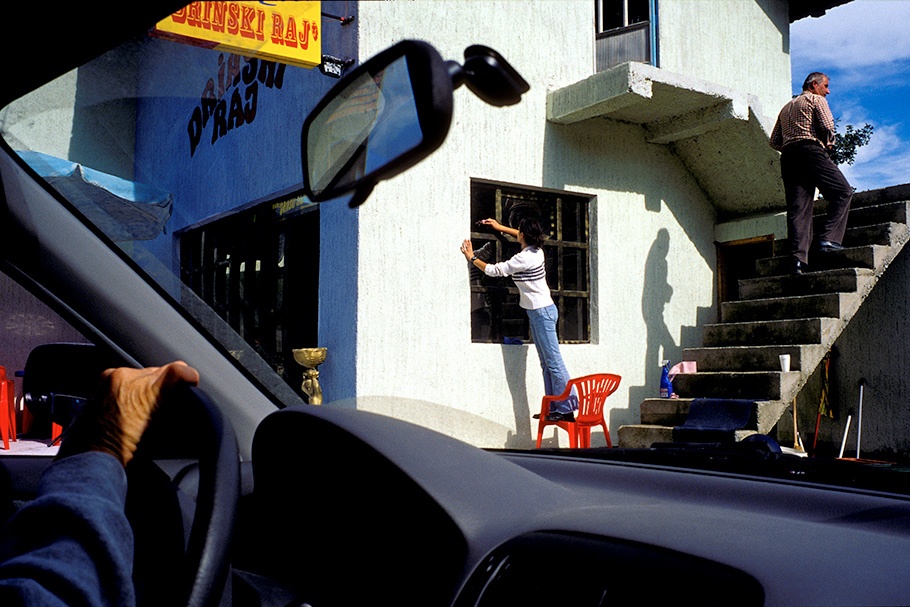 A rebuilt store open for business again; the second-floor living quarters remain partly finished, a common sight, even ten years after the end of the war. 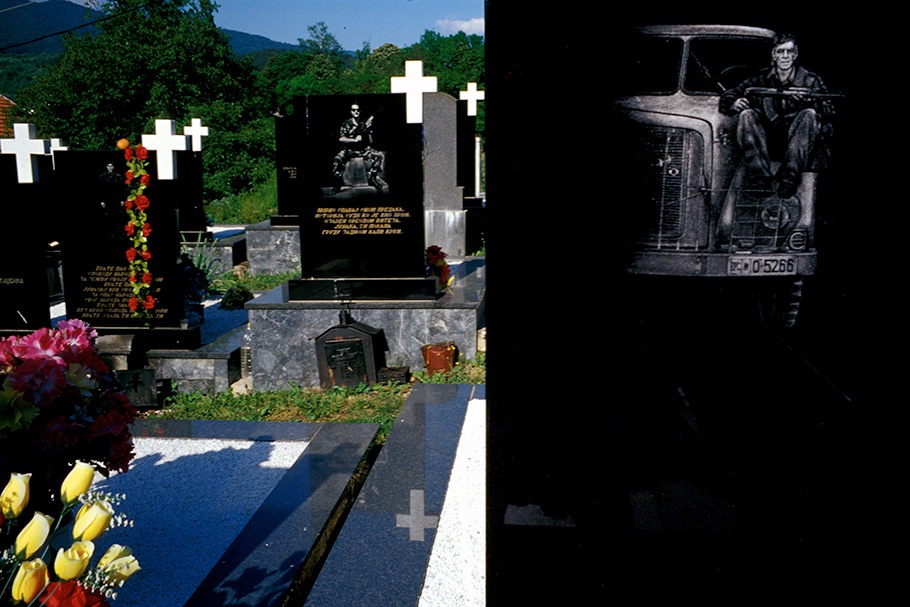 Graves of Bosnian Serb soldiers who were killed during the war. The cemetery is in Visegrad, where some 2,000 Muslim men and boys were killed by Serbs in the spring of 1992. 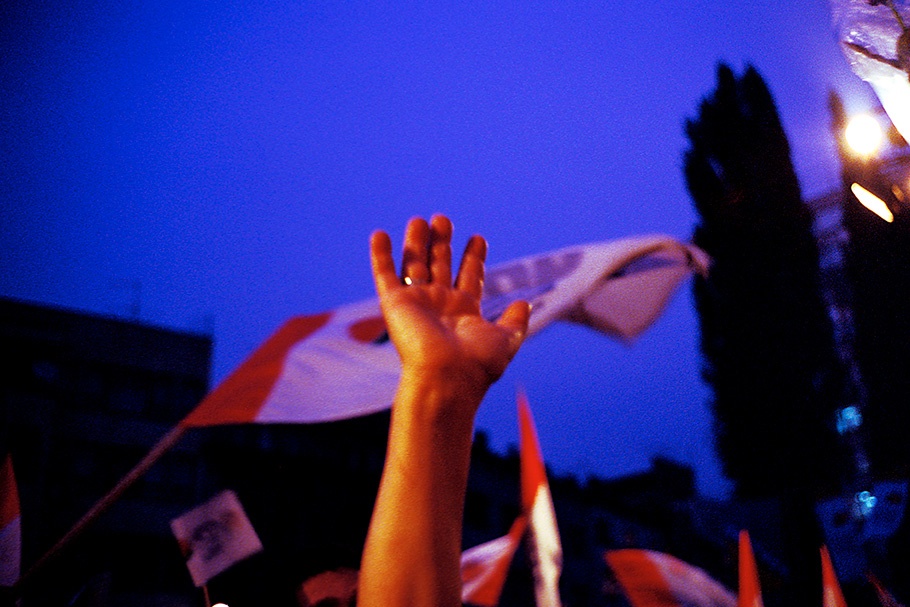 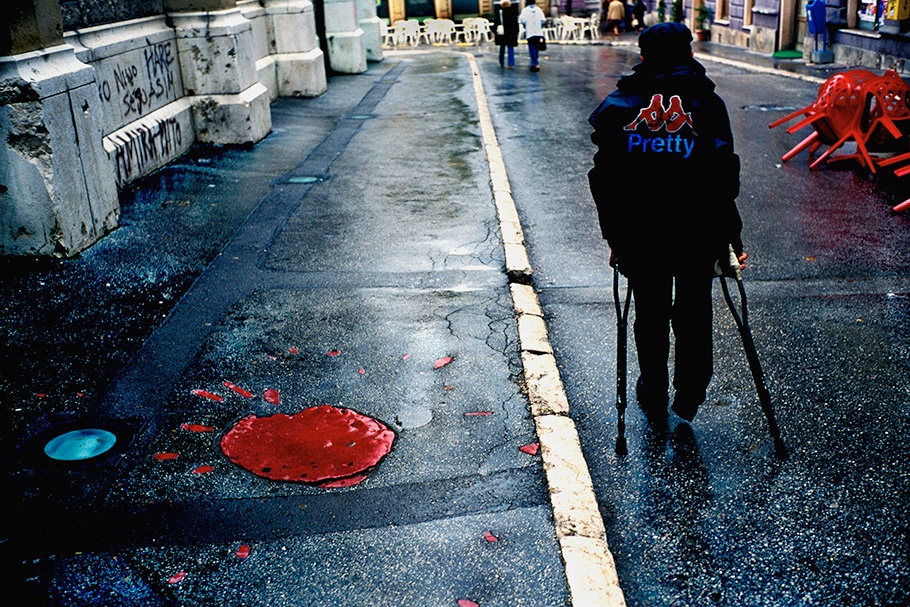 A "rose of Sarajevo" marks the site of one of the many thousands of mortars which Serb forces fired on civilians during the three-and-a-half-year siege of Bosnia's capital. 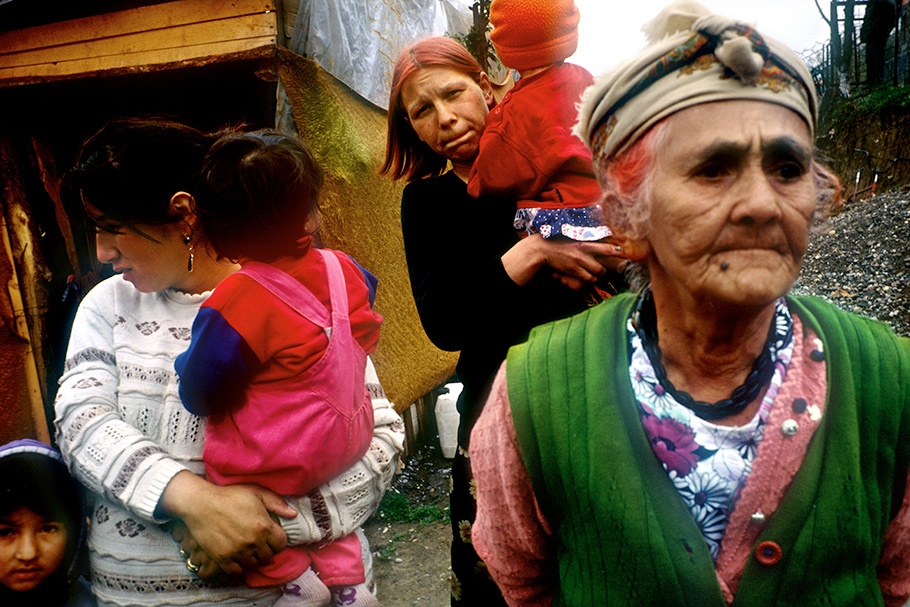 A Roma family, expelled by Serbs during the war, returns to their home to rebuild. 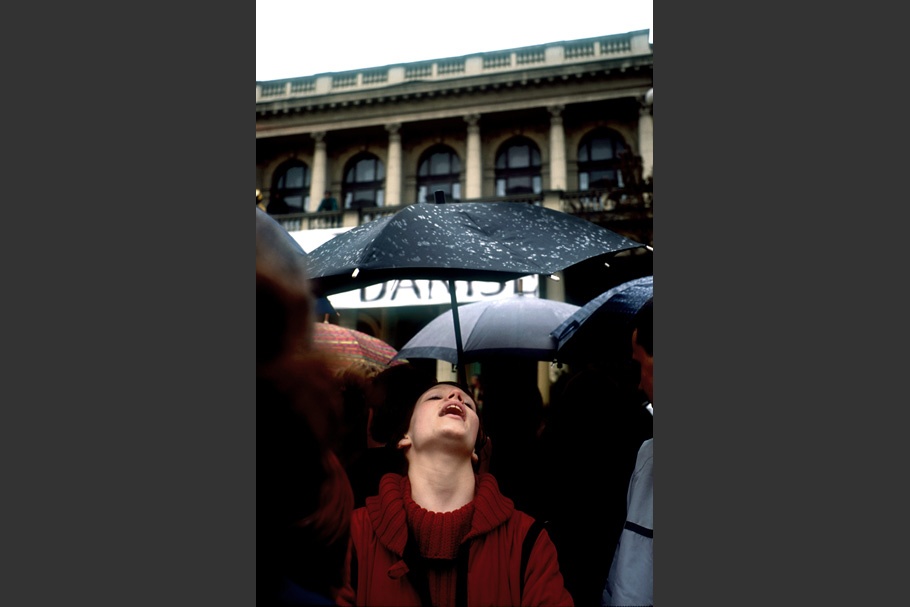 A young woman stands among the crowd of people waiting for Danis Tanovic at a rally to celebrate his Oscar victory for his film No Man's Land, about the war. 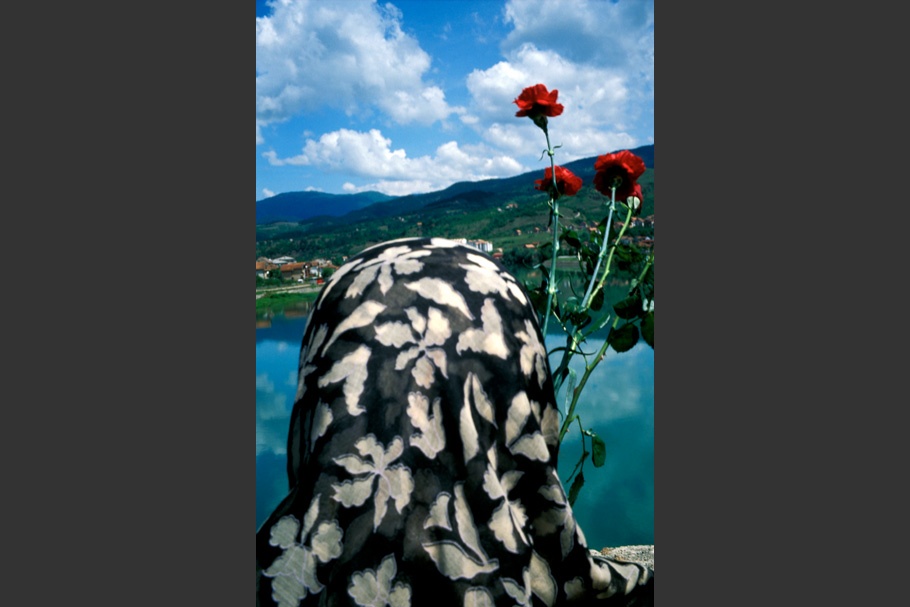 A Muslim widow about to throw flowers in the Drina River as part of a commemoration ceremony for the some 2,000 men and boys who were killed there in May 1992. 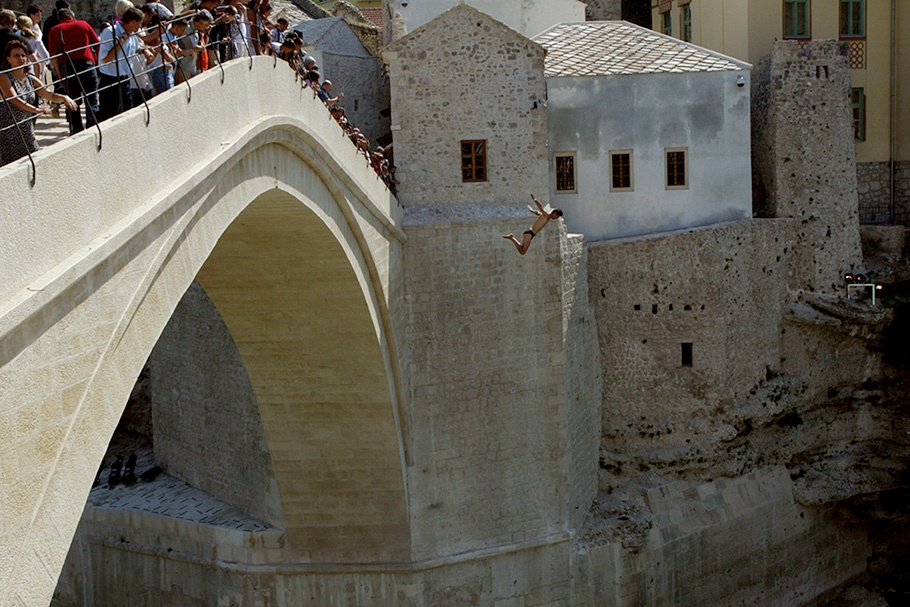 One of Mostar's legendary jumpers dives off the bridge, which was destroyed during the war. It was rebuilt and opened on July 23, 2004, the day before this picture was taken. 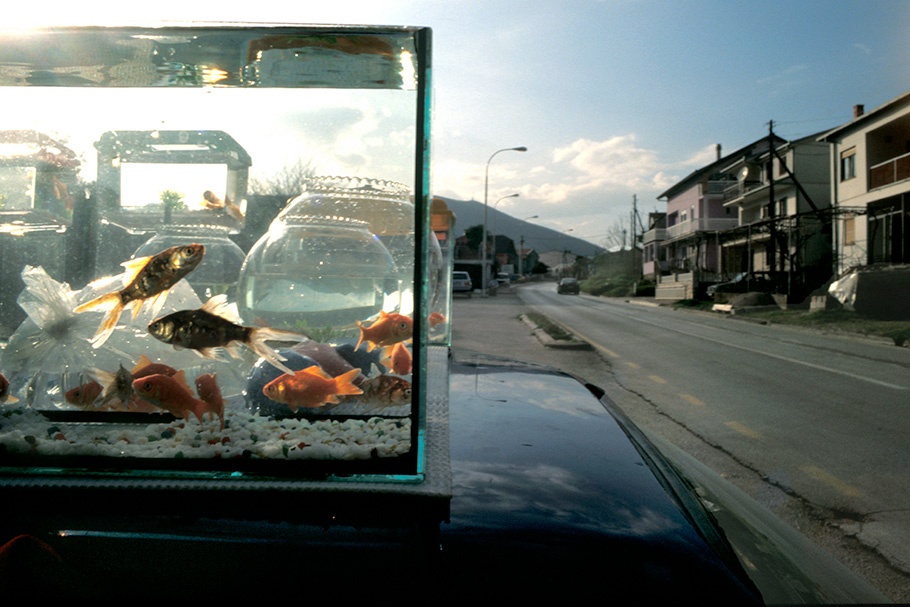 A former staff writer for the Christian Science Monitor and a founding reporter of Monitor Radio, Sara Terry made a mid-career transition to documentary photography in 1997. Her book, Aftermath: Bosnia’s Long Road to Peace, documents the struggles and triumphs of Bosnians trying to rebuild their lives and to restore a civil society. Her work on this subject inspired her to start the Aftermath Project, a non-profit foundation, to help photojournalists document the aftermath of conflict.

At the Christian Science Monitor, Terry worked nationally and internationally, developing a focus on social justice issues and cultural critiquing. She was the lead reporter on the Christian Science Monitor’s 1987 groundbreaking series, “Children in Darkness,” about the exploitation of children in the developing world. She has won several awards for her work, including two from the Overseas Press Club. She was featured in the 1991 book Women on Deadline, as one of the top ten female reporters in the United States, for her international reporting.

Throughout the 1990s she worked as a freelance writer for publications such as The New York Times Magazine, Fast Company, Rolling Stone, and the Boston Globe Magazine. As a freelancer she reported on a range of subjects, from the torture and assassination of street children by death squads in Guatemala to grassroots efforts in America to bridge the “digital divide.”

In 2005, Terry received an Alicia Patterson fellowship for her photography, which allowed her to continue documenting the aftermath of war in Bosnia. She is represented by Polaris Images.

This work is rooted in my conviction that war is only half the story, something the people of Bosnia and Herzegovina, like people who have lived through any terrible conflict, know only too well. But the aftermath of conflict is a story that often goes untold. The media, which does a very good job of covering war, rarely remain after the guns and violence and madness of conflict have finally stopped. Reporters move on to the next hot spot, and the world forgets.

Aftermath is about that period of time when people no longer struggle just to survive, as they do in war, but to live again, to restore lives and communities, to rebuild a civil society. This project is a reflection of my belief that the aftermath is as newsworthy as the war, if not more so, because it is the time when the human spirit is really put to the test. It is also, however, the time when the prologue to the future is being written. We ignore it at our own peril.

To explore these themes, I worked with groups of people and on crucial issues that will determine Bosnia’s future: the widows of Srebrenica; the youth of Sarajevo; exhumations and identifications; areas such as Republika Srpska,where ethnic tensions still run high; and returning refugees. But in addition, I explored everyday life in Bosnia, searching for the moments and details that help illumine the promise and the contradictions of a postconflict society.

In the course of the four years it took to make this work, I became convinced that we need post-conflict images to remind us of our humanity—to testify that war is not the final word on who we are as human beings, nor the final image of our spirit.