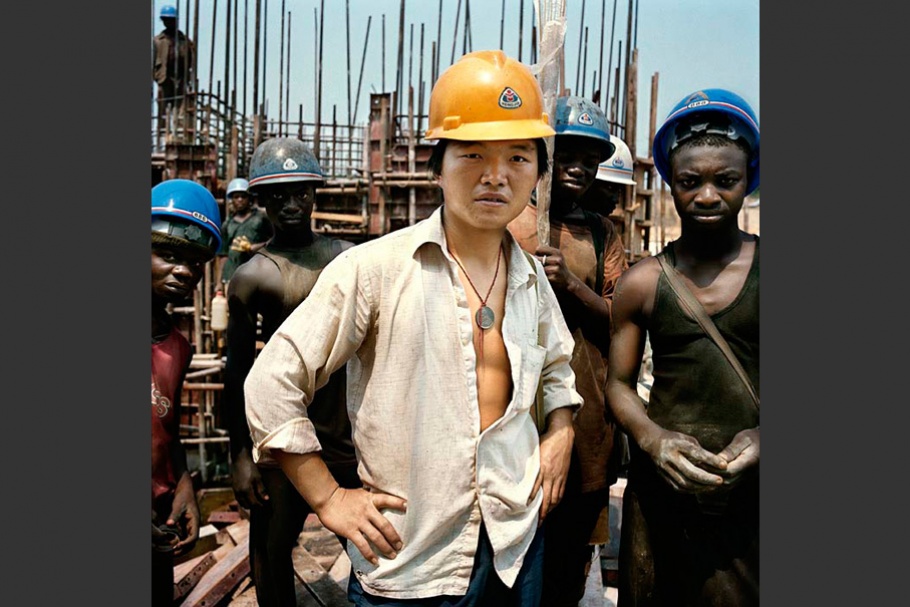 A Chinese worker of the China National Mechanical & Equipment Import & Export Corporation (CMEC), which in 2001 obtained a contract with the Congolese government. With its potential to produce 120 megawatts, this power plant will double the national production of electricity, giving light to a large part of the Congo. Four hundred Chinese technicians and qualified workers supervise a Congolese workforce of a thousand men who are each paid US$3 a day. Workers often leave as soon as they can find better paying jobs. This, in part, explains the delay in the dam’s construction, which Congolese authorities want completed in time for the country’s next elections. CMEC requires the Chinese workers to wear yellow hardhats and the Congolese to wear blue hardhats. 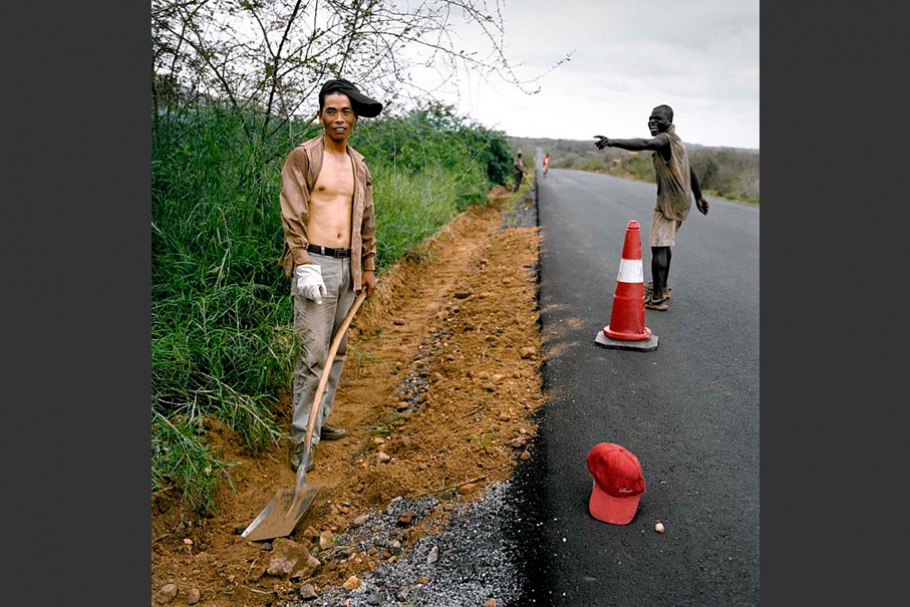 A Chinese laborer and an Angolan colleague work on the coastal highway. China International Fund (CIF)—the Chinese holding company based in Hong Kong that oversees many contracts in Angola—has rebuilt this road, which unites the capital Luanda with Lobito, in record time. Angola has one of the world’s highest concentrations of land mines, but the Chinese companies often consider removing or defusing the mines an unnecessary measure that would delay construction. Chinese and Angolan workers frequently die or are injured in accidents caused by land mines.

Between Luanda and Lobito, Angola. October 2007. 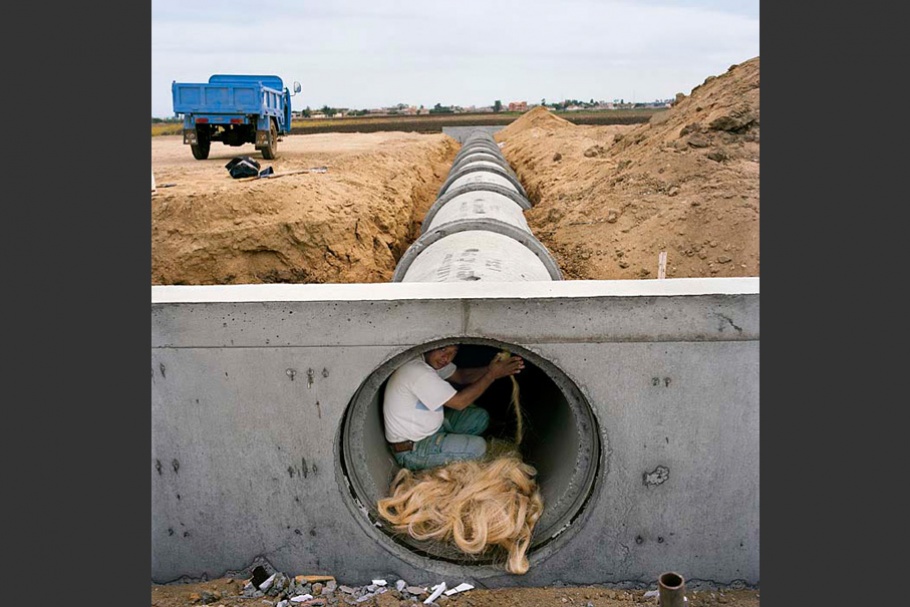 A Chinese employee for the Groupement CITIC-CRCC construction company is working on a canal that will pass under the future East-West Highway. CITIC-CRCC won the tender to construct 528 km of the highway in 40 months, which would constitute a world record. To win this race against time, almost all the material and resources come directly from China, including 10,000 workers. CITIC is a semi-private financial group with 90 billion euros of reserves, branches in 44 countries, and more than 100 construction projects around the world. CRCC is the second biggest Chinese company, with 220,000 workers. It constructed the China-Tibet railroad. 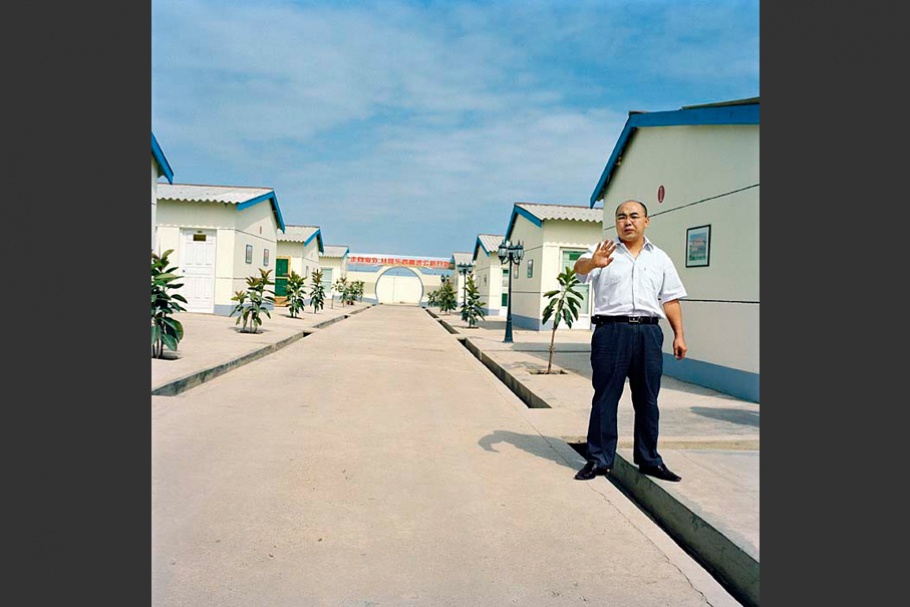 The prefabricated compound number 2, where the Chinese live while building the Algeria East-West Highway. The CITIC-CRCC consortium is attempting to construct 528 km of the highway in 40 months. An employee of the consortium tries to stop the photographer from entering, even though he has Algerian authorization to do so. The employee feels that the compound is Chinese territory, just like an embassy. 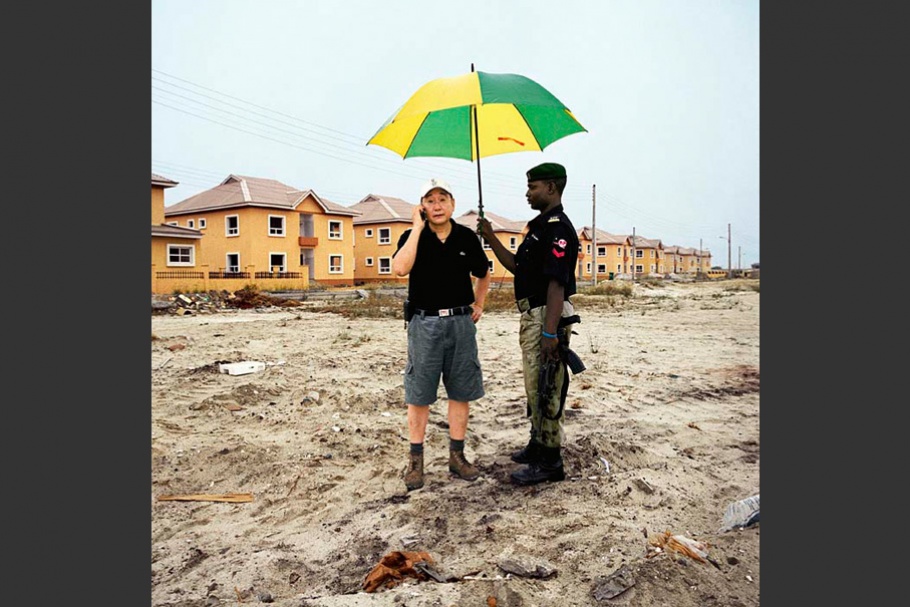 Born in Shanghai, Jacob Wood has lived in Nigeria since the 1970s, building an empire that includes hotels, restaurants, construction companies, and factories. Now a presidential adviser too, he has a police escort to ease his way through Lagos’s continual traffic jams. Here, with a member of the Nigerian police force who functions as his private guard, Wood is on the site of a 544-villa development he is building for Chevron employees near their local headquarters on the Lekki peninsula. 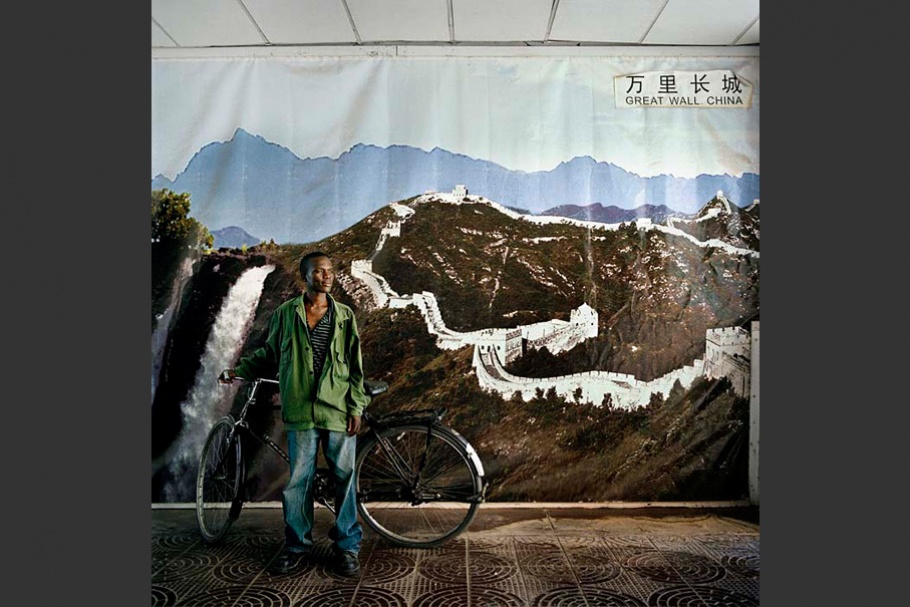 In front of the offices of the Chambishi mine, owned by copper giant China Daye Non-ferrous Metals Mining Limited, the management has hung a photomontage uniting the Great Wall of China and Zambia’s Victoria Falls. 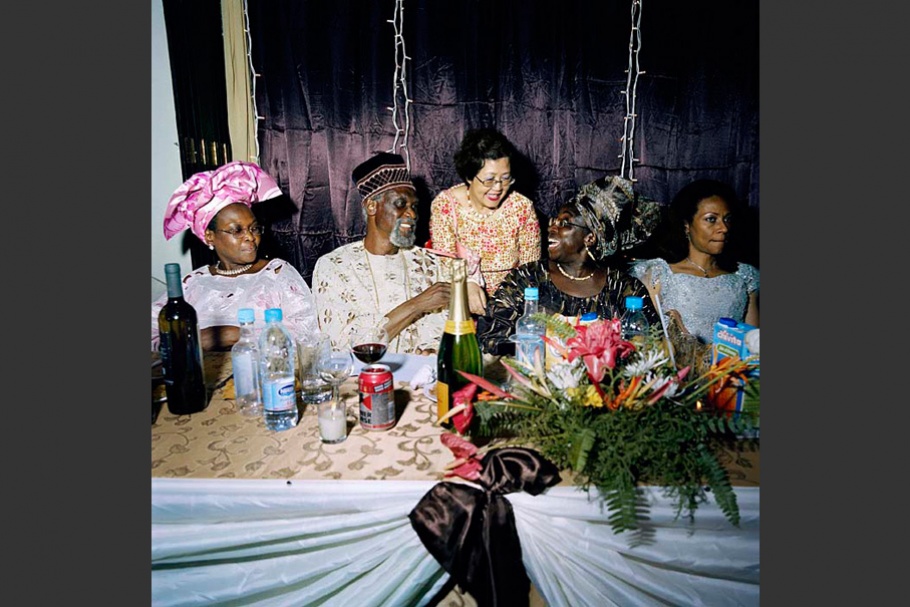 Mrs. Wood in her immense restaurant, The Golden Gate, in Lagos. The five-floor restaurant seats 1,500 people. Senator and polymath Anthony Mogbongubola Soetan (second from left) has come here to celebrate his 70th birthday in the company of about 200 guests, all members of the Nigerian elite. 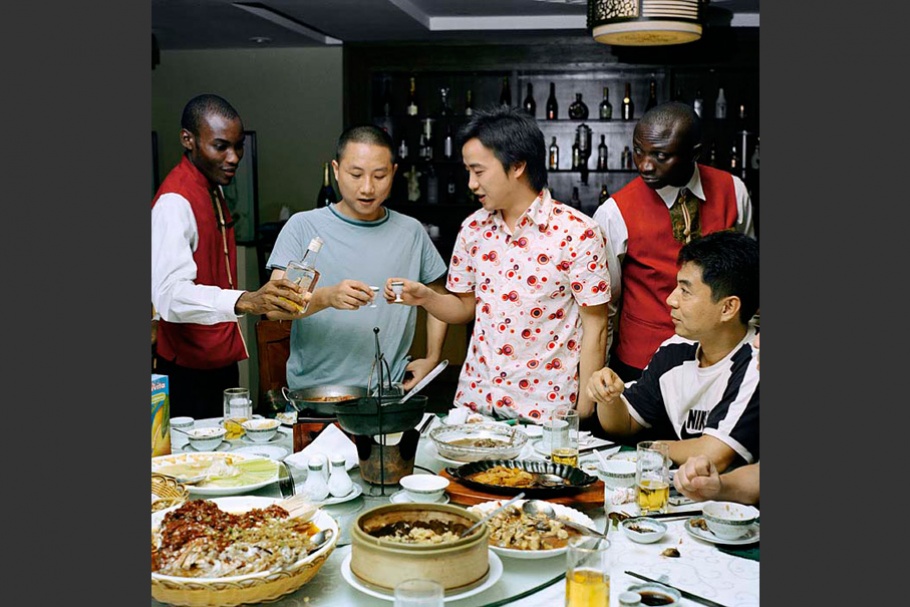 A festive dinner for a meeting of the association of “Chinese entrepreneurs of Lagos.” This is a monthly event held at the Mr. Chang restaurant. The members of the association are part of the new generation of Chinese businessmen in Africa. They are often very young and their companies are booming. The waiters are dressed in Chinese costumes that are directly imported from China. 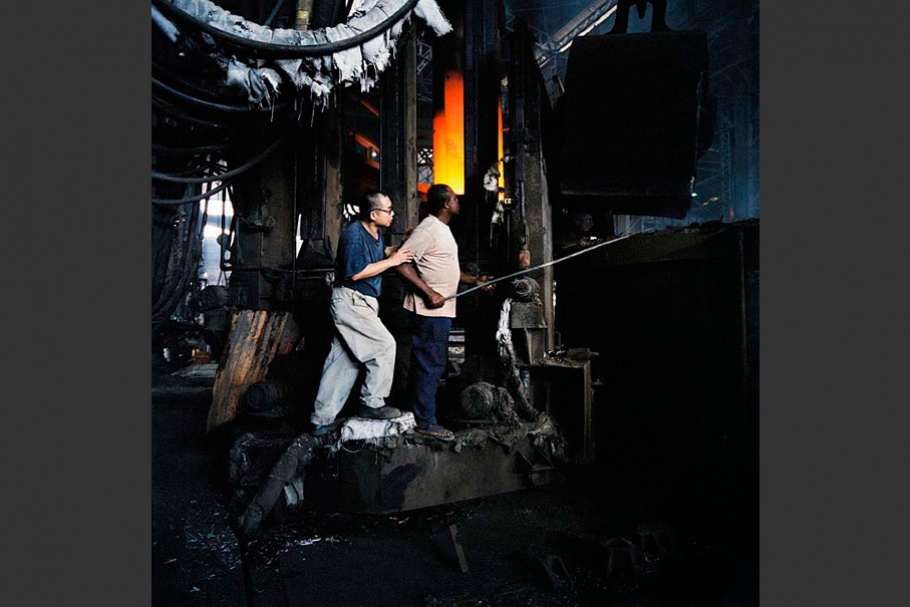 Nigerian workers and a Chinese technician organize the production at Federated Steel, a steel plant owned by Y.T. Chu at Ota in Ogun State. Chinese expatriates, who are often very qualified, are charged with training the Nigerians as well as keeping up the very intense work pace. Even if the Chinese often speak little more than a few words of English, they occasionally manage to create complicity with their African colleagues. 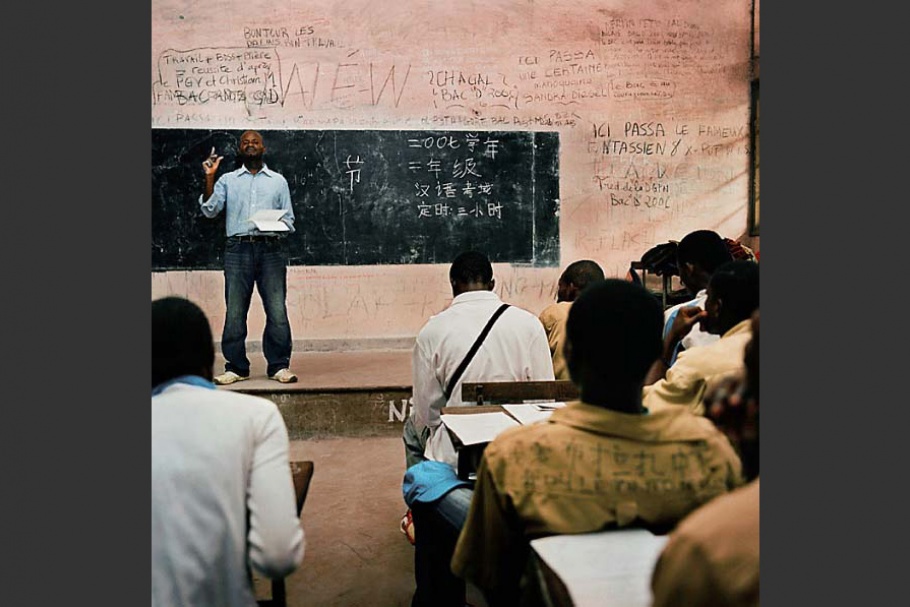 The Savorgnan de Brazza high school is the most respected school in the Congolese capital, but the buildings are in very bad need of repair. Jean de Dieu Malanga, professor of Chinese, is giving second-year students their annual examination. He himself studied in China during the 1980s and, in addition to his work as a teacher, makes a living as a translator for the Chinese bosses at numerous construction sites.

Brazzaville, Republic of the Congo. June 2007. 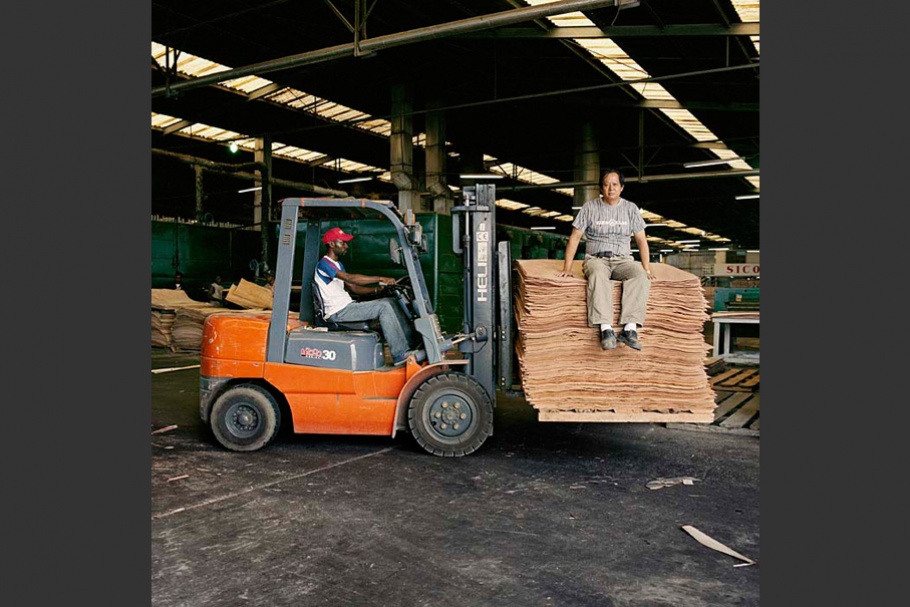 Chua Booan Lee (right) in the wood-processing plant he manages for Sicofor. This plant had just been renovated by its new Chinese owners and inaugurated in June 2007 by Henri Djombo, the Congolese minister of the forest economy. It produces thin layers of the precious wood that are glued together to produce wood veneer to be exported to China, the United States, and Europe. Congolese law requires timber companies to process 80 percent of logs into wood products before exporting out of the country. But nobody respects this proportion, because it is far more profitable to export the logs and process them in China. 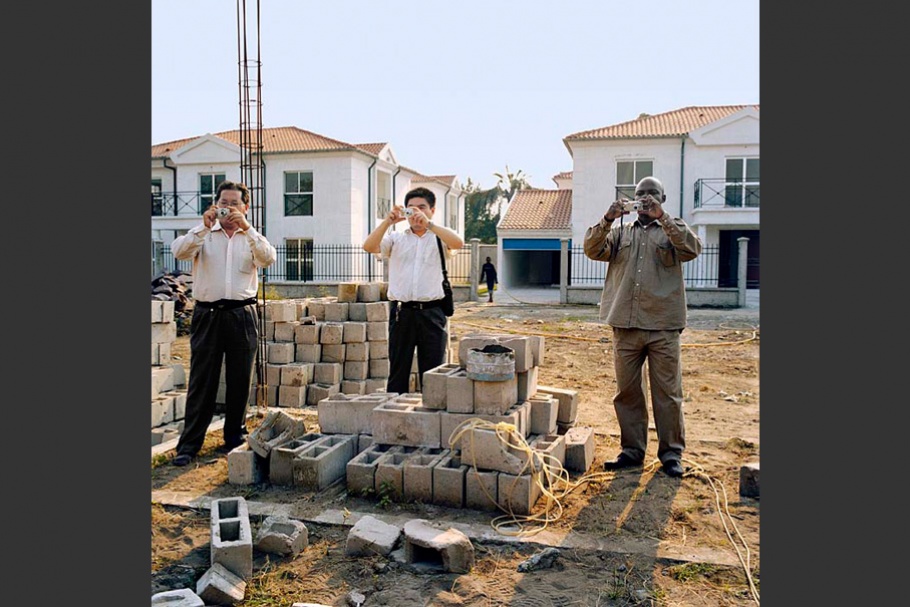 Two Chinese employees of the Chinese company Weihai International Economic ＆Technical Cooperative (WIETC) and their Congolese translator are photographing the Bacongo site where WIETC is constructing 40 villas. Hundreds of shacks have been demolished to make way for the villas. The photos will be used in China to show the progress of the work and to attract new Chinese investments.

Brazzaville, Republic of the Congo. June 2007.

Paolo Woods, now based in Paris, ran a photo laboratory and gallery in Florence, Italy, before dedicating himself to documentary photography in 1998. His books include Un monde de Brut (with writer Serge Michel, 2003) covering the story of oil in 12 countries including Angola, Russia, Kazakhstan, United States, and Iraq; American Chaos (with Serge Michel, 2004) on the debacle in Afghanistan and Iraq; and Chinafrica (also with Serge Michel, 2007) documenting the spectacular rise of the Chinese in Africa. Chinafrica is translated and published in 10 languages.

Woods’s work regularly appears in GEO, Le Monde, Newsweek, Time, and many other international publications. He has had solo exhibitions in Austria, France, Holland, Italy, and Spain, and numerous group shows around the world. His photographs are in the French National Library, the FNAC Collection, and the collection of the Sheikh Saud Al-Thani in Qatar. Honors include the Alstom Journalism Award, the Amilcare Ponchielli Prize (awarded by the Italian Association of Photo Editors), and a World Press Photo award for his work in Iraq.

To quench its thirst for oil, its hunger for copper, uranium, and wood, the government in Beijing is sending Chinese state companies and adventurous entrepreneurs to Africa.

For the 500,000 Chinese who have emigrated in the last decade, Africa holds the promise of a 21st century frontier. Some have struck gold and run conglomerates spanning large regions of Africa, others are still selling cheap goods along the burning hot roadsides of some of the poorest countries in the world.

For many Africans, the arrival of the Chinese is perhaps the most important event since the old colonial rulers left decades ago. The Chinese do not act like the former colonialists. They build roads, dams, and hospitals in exchange of raw materials—and they win over the people. They speak of neither democracy nor transparency—and they win over the rulers.

I have documented the Chinese stirring up Africa, accompanying them along the railroads of Angola, through the forests of the Congo and the karaoke bars of Nigeria.

From the barren countryside of Central China to the leather armchairs of African ministries, I have tried to capture the quest of the Chinese who came to Africa to make their fortunes and who invested their lives and their money in a continent that many in the West have long considered fit only for handouts.

As I worked I tried to develop a visual language that mixed the content of classic photojournalism with portraiture photography but that also played with elements of colonial imagery and the propaganda photography so dear to the Chinese establishment.

These are rare images. Getting access to the Chinese in Africa was the most difficult assignment I have ever undertaken. The Chinese want to keep a low profile on their business activities in Africa. I hope these photographs portray a phenomenon and a new dimension that is not just a product of globalization but also its ultimate realization.