Promises and Lies: The Human Cost of the War on Terror in Afghanistan 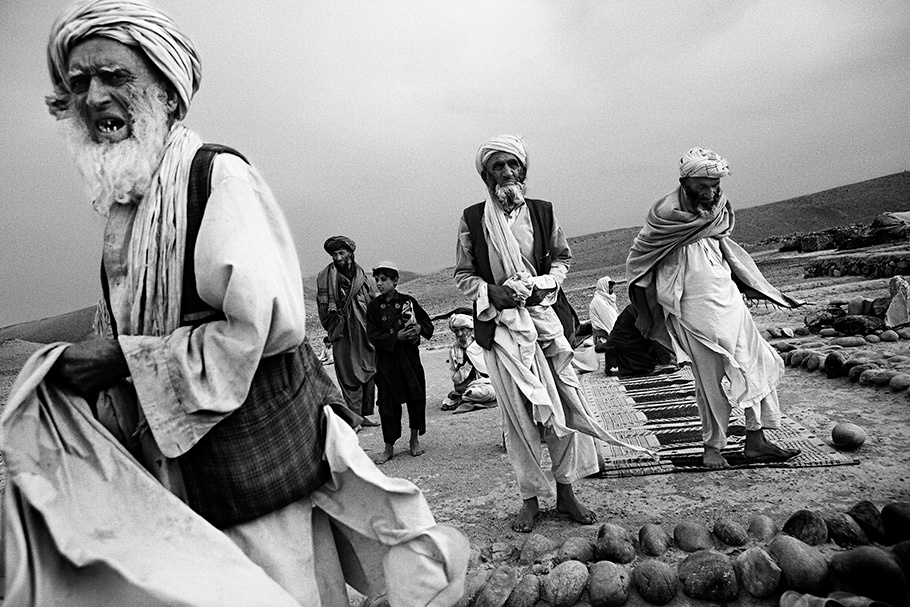 Since 2002, nearly four million Afghans have returned to Afghanistan after three decades in exile, but unfortunately, their lives are often more difficult than in the refugee camps they came from. 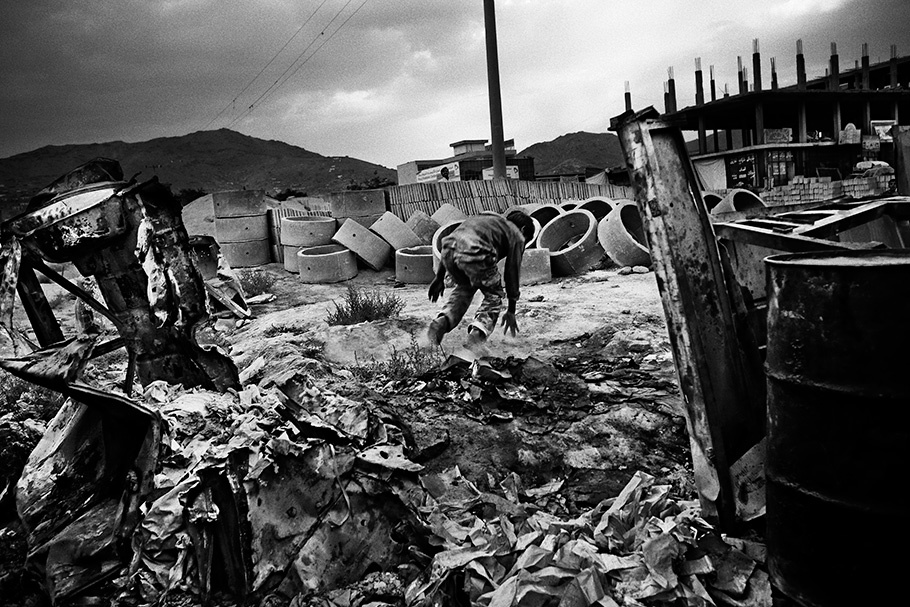 A returnee from Pakistan searching through garbage for something to sell. 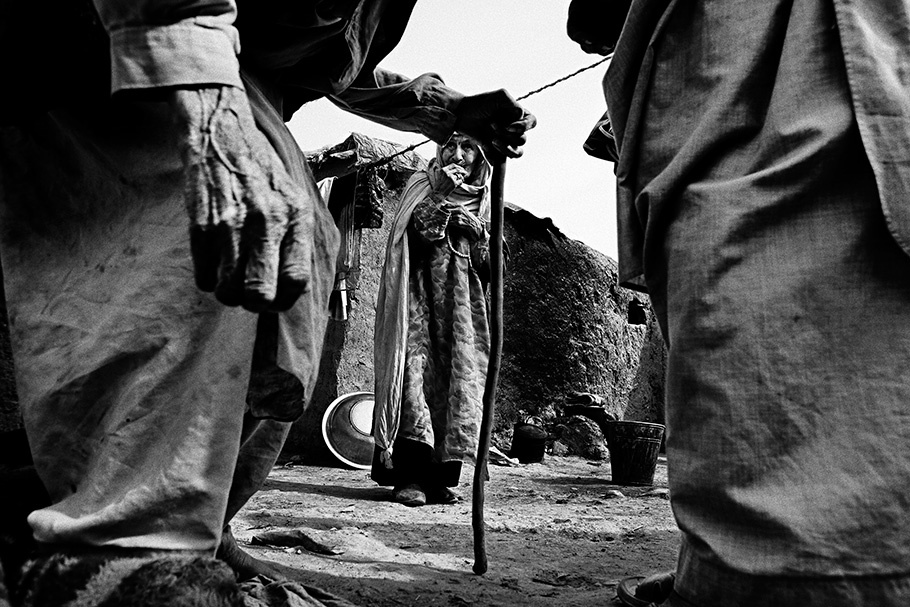 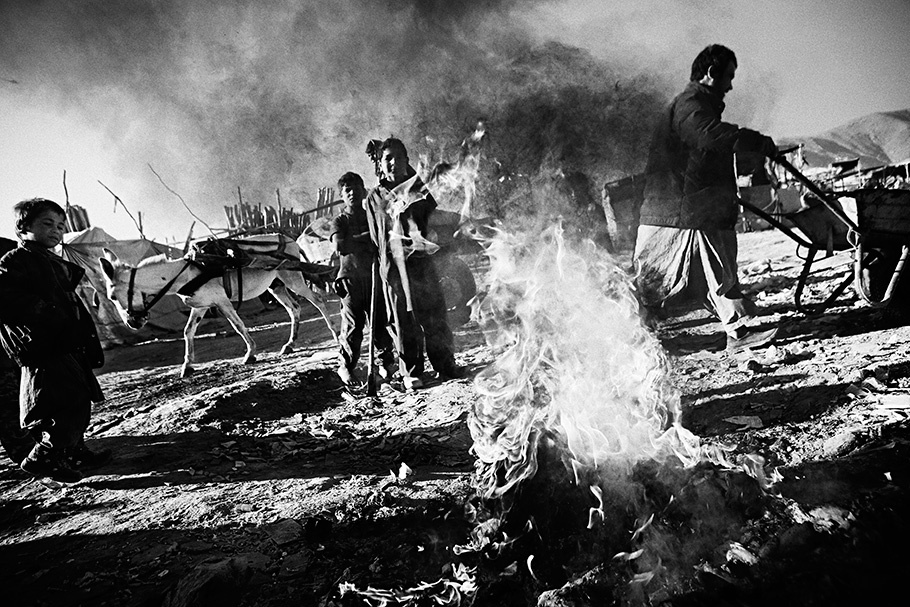 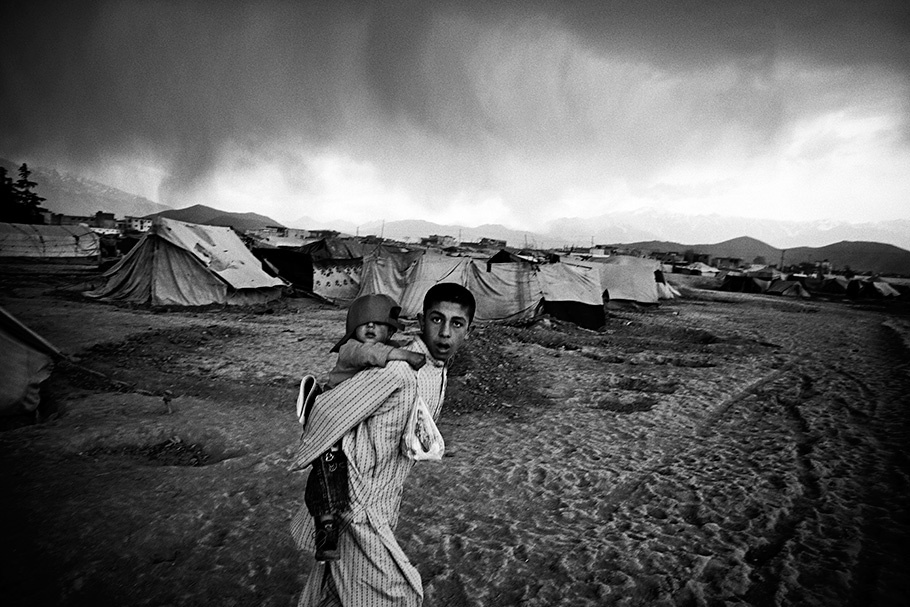 Recently displaced people from the Helmand province in Chahari Qambar, an urban slum in western Kabul. The community, which has grown to about 700 to 800 families, includes many migrants looking for jobs, as well as people fleeing conflict. 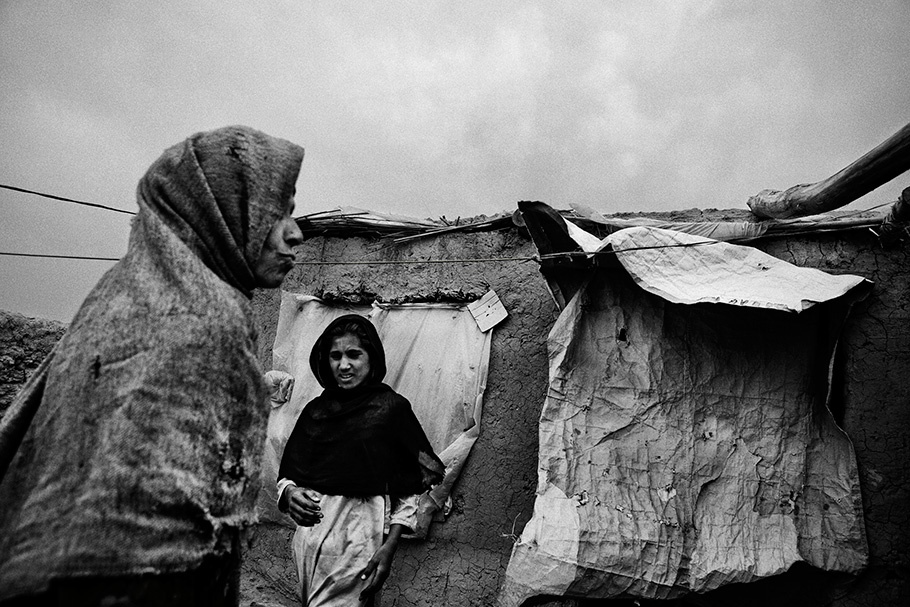 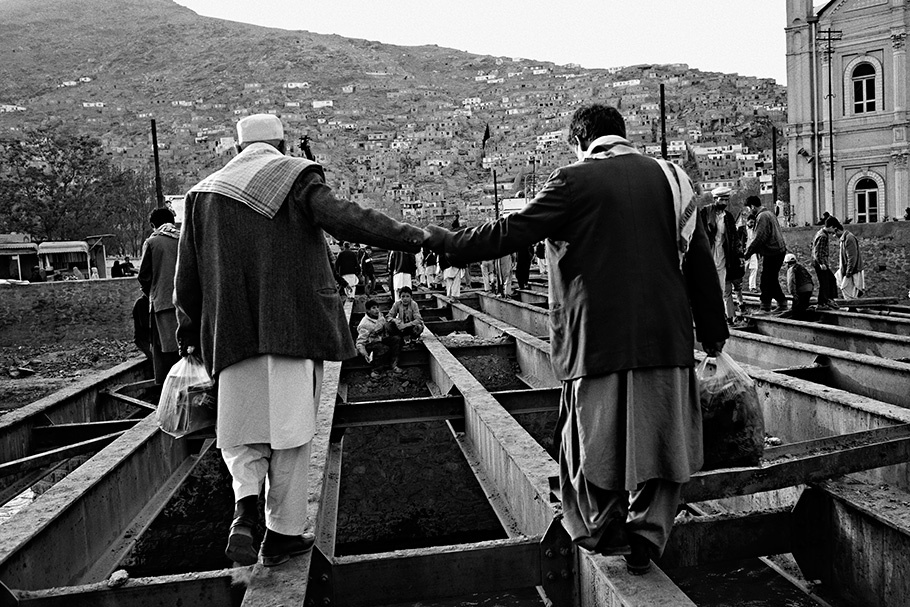 Afghans helping each other cross a bridge that is under construction. 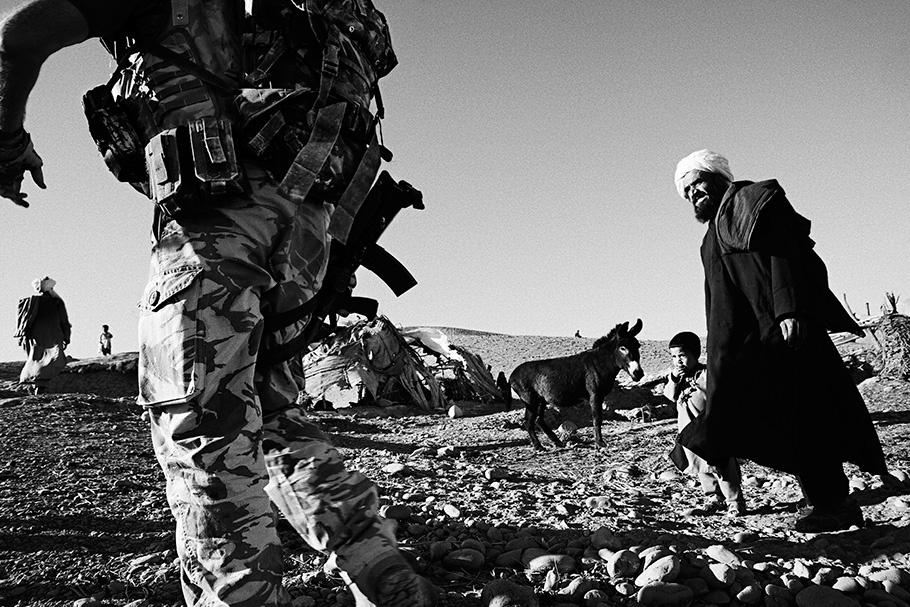 British soldier on patrol, searching for the Taliban. 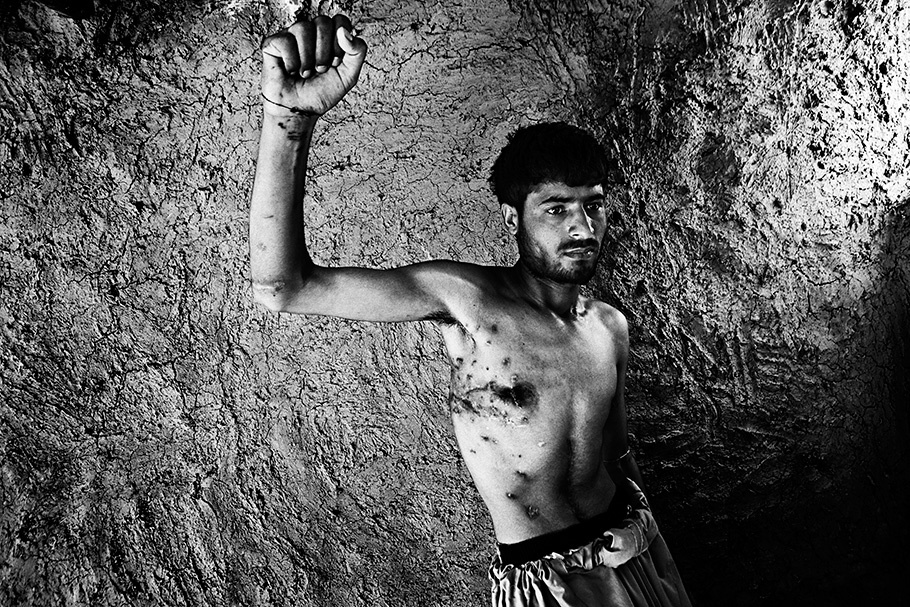 A young police officer from the Afghan national police shows his wound. He was injured in the south of Afghanistan by the Taliban, and he cannot work anymore and has no support from the Afghan government. 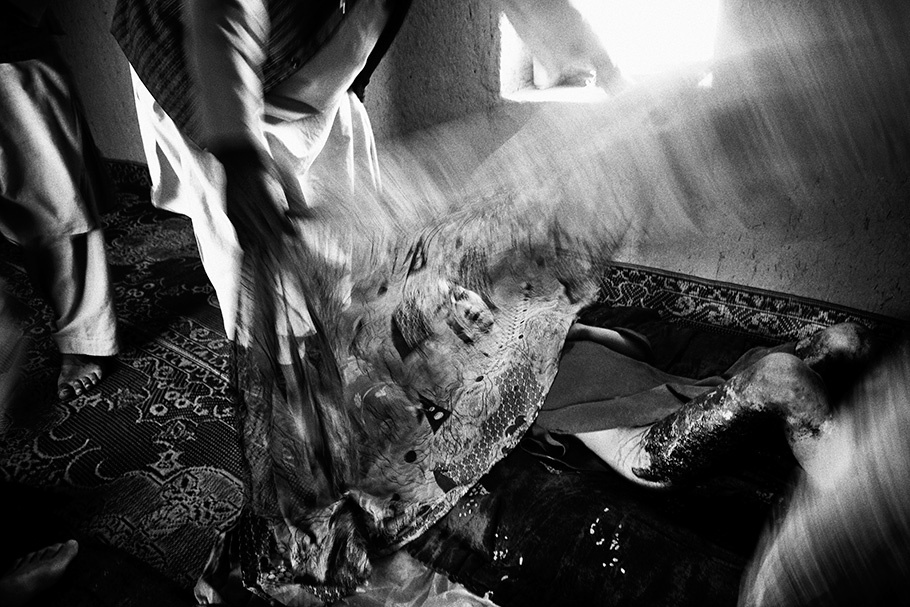 A badly burned Afghan boy in a small village in northern Afghanistan. The village has no clinic or hospital, and his parents have no money to take him to the hospital in the city. 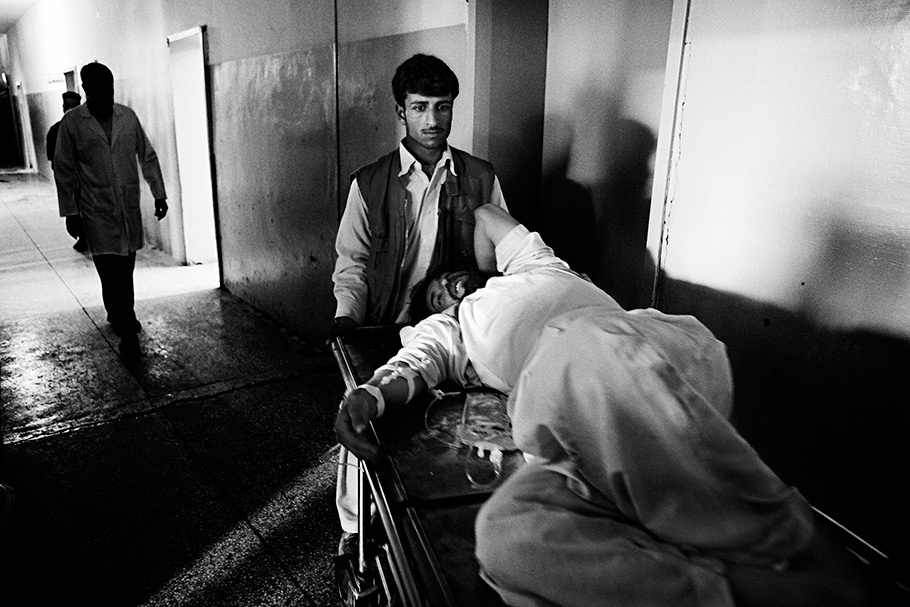 Public hospitals, crowded with the victims of war, do not provide most patients with the medical care they need. 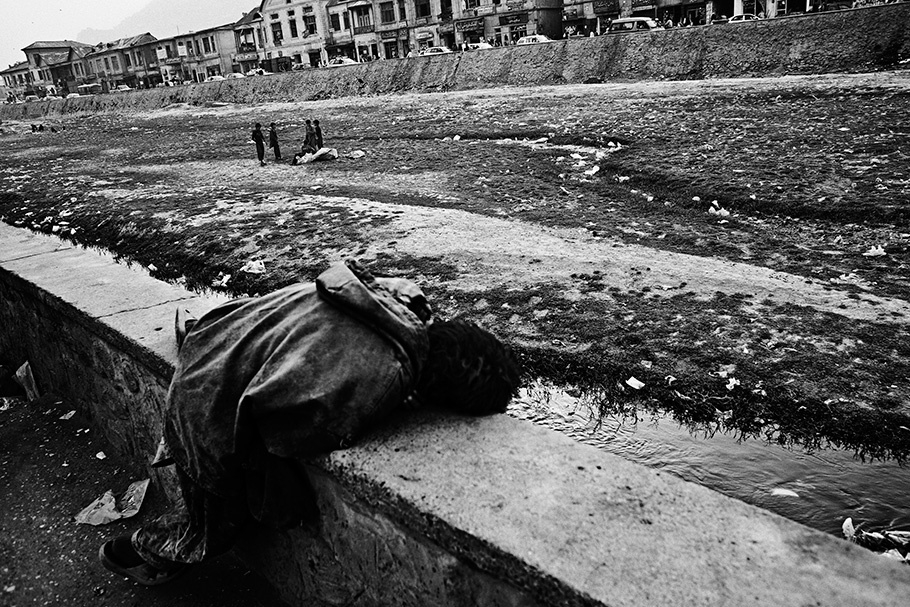 Drug addicted boy on the street. Heroin addiction is spreading in Afghanistan. 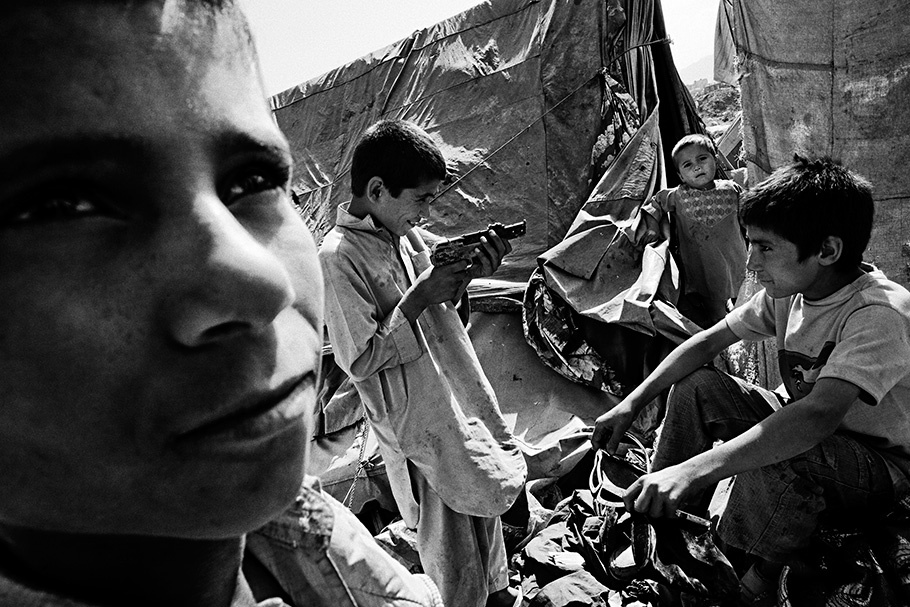 Returnees in a refugee camp, where there are no jobs, schools, roads, clinics, or hospitals. The war in Afghanistan is forcing thousands of people to flee their homes. Most of the displaced people arrive in Kabul. 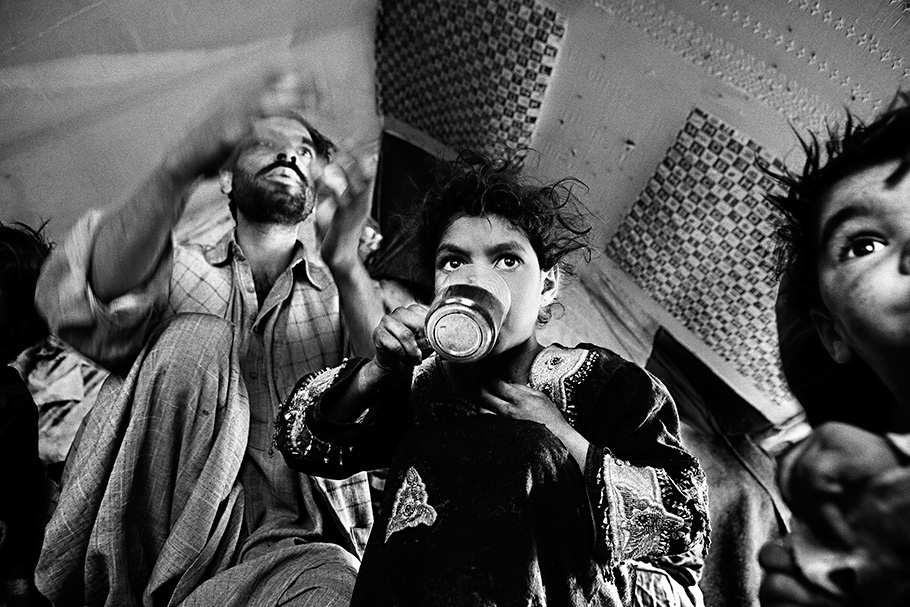 This camp in Kabul’s District 8 hosts nineteen families who left their homes in the Beneworsik “land allocation scheme,” because they could not find work there in order to survive. These families live in flimsy makeshift tents with poor sanitation. Parents work in the nearby vegetable market, while their children wash cars or beg in the neighborhood. 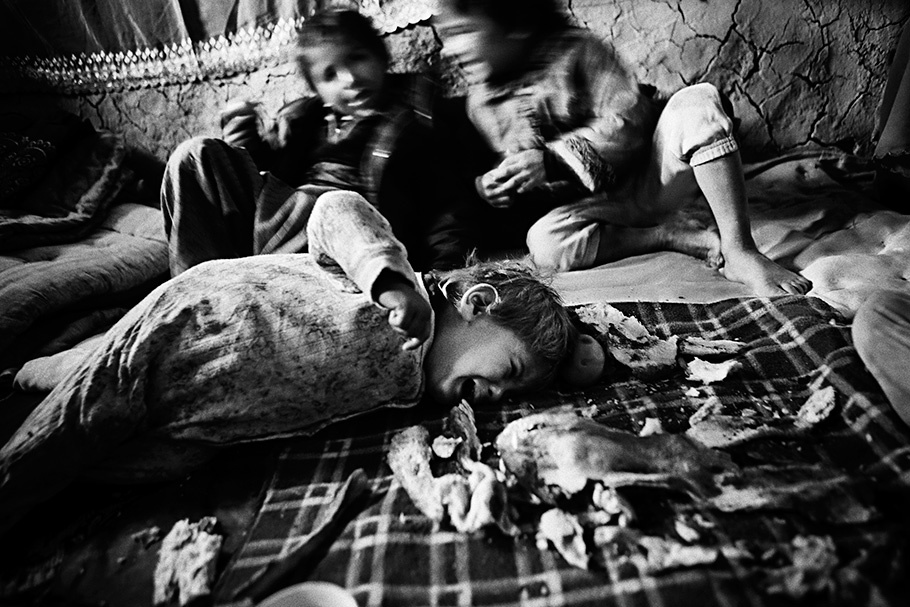 Children eating a breakfast of hard bread in Chamane Babrak, an urban slum in northern Kabul. Chamane Babrak houses a mix of internally displaced people and returnees from Iran and Pakistan. The community started with 50 families, but has grown to about 350 to 450 families. 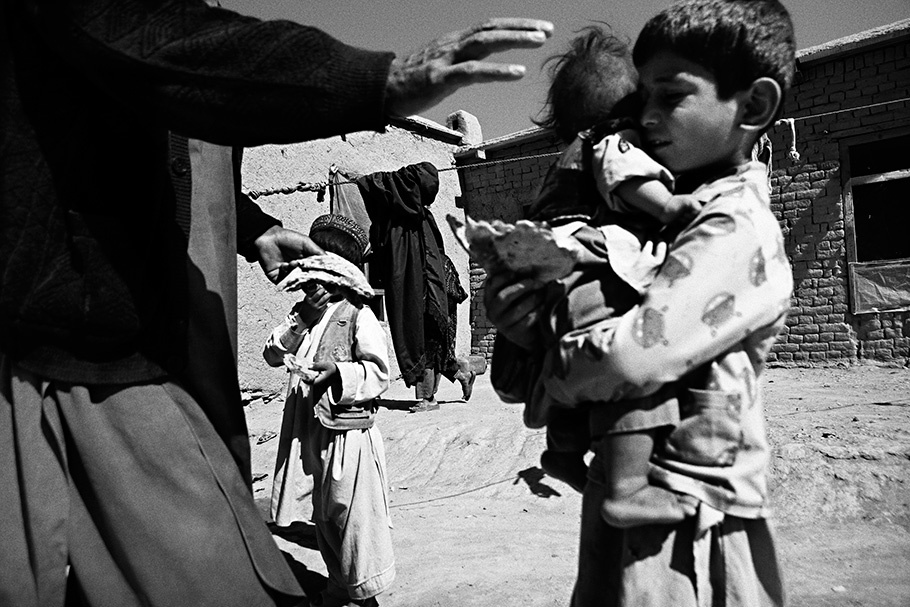 Returning families on land given to them by the Afghan government. The isolated setting makes life even more difficult than in the refugee camps around the cities. 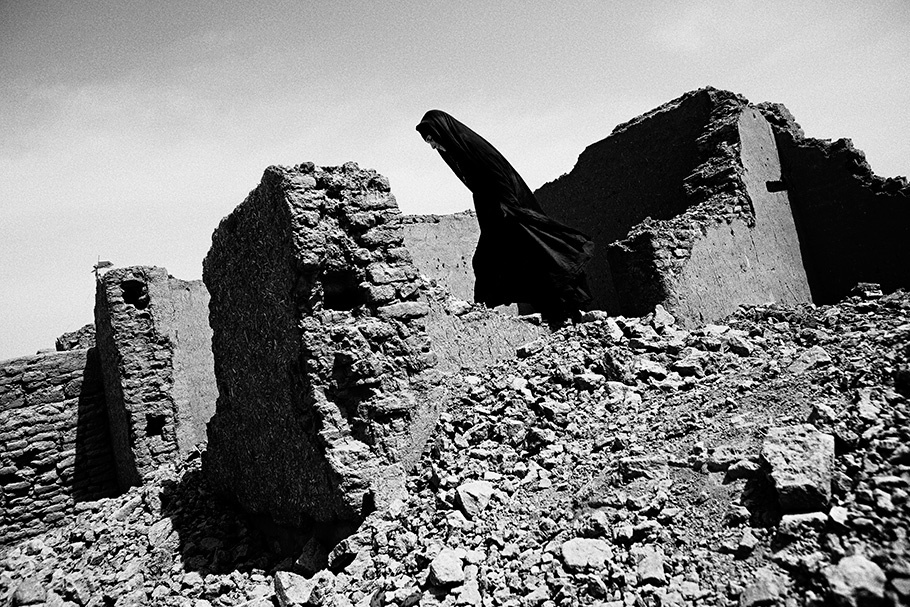 Every day, thousands of Afghan refugees are deported to Afghanistan by the Iranian authorities. Most deportees cannot return home and end up on the outskirts of big cities looking for work to support their families. 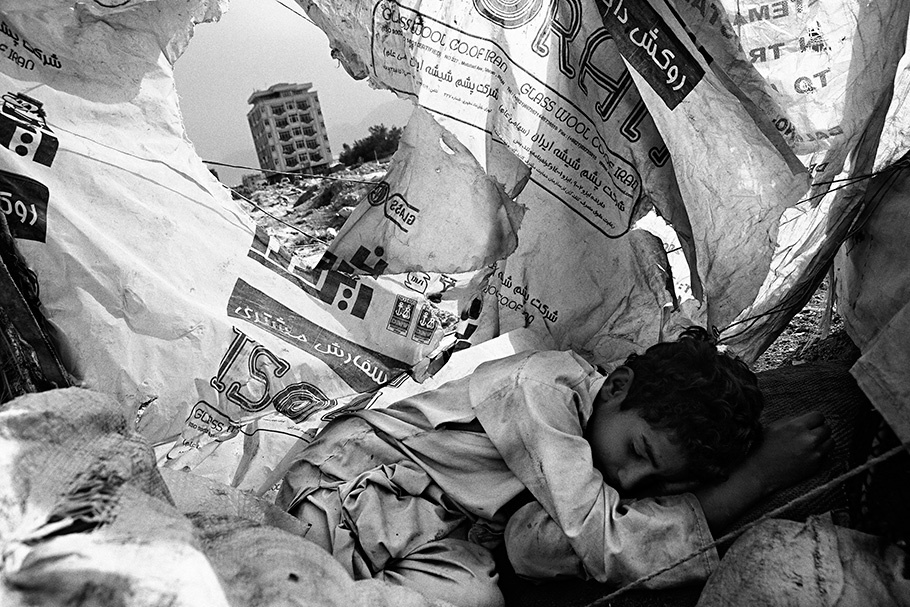 Boy sleeping in a makeshift tent in Chahari Qambar. 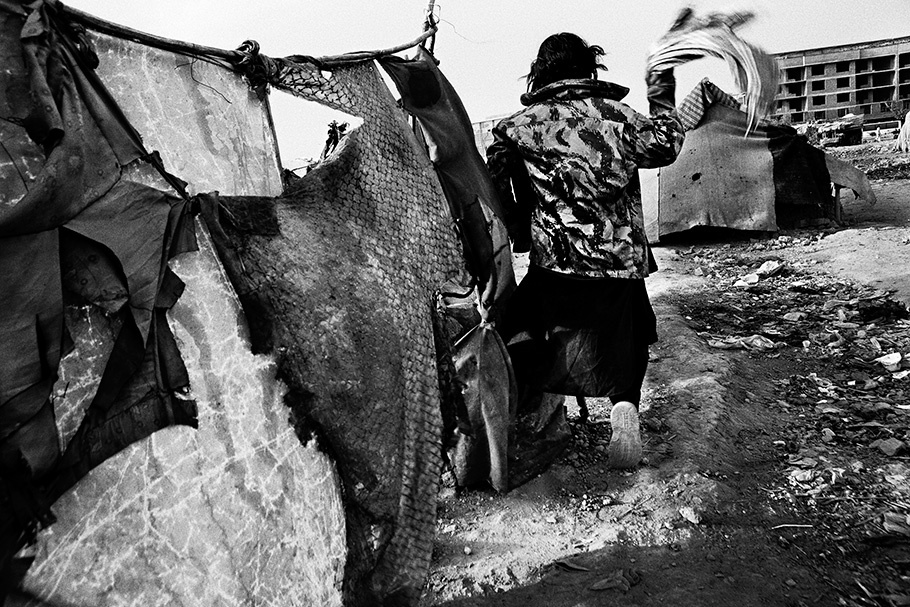 Displaced people take refuge in the cities. The “urban refugee phenomenon” is new to Afghanistan, where refugees usually stay in camps outside of the cities. 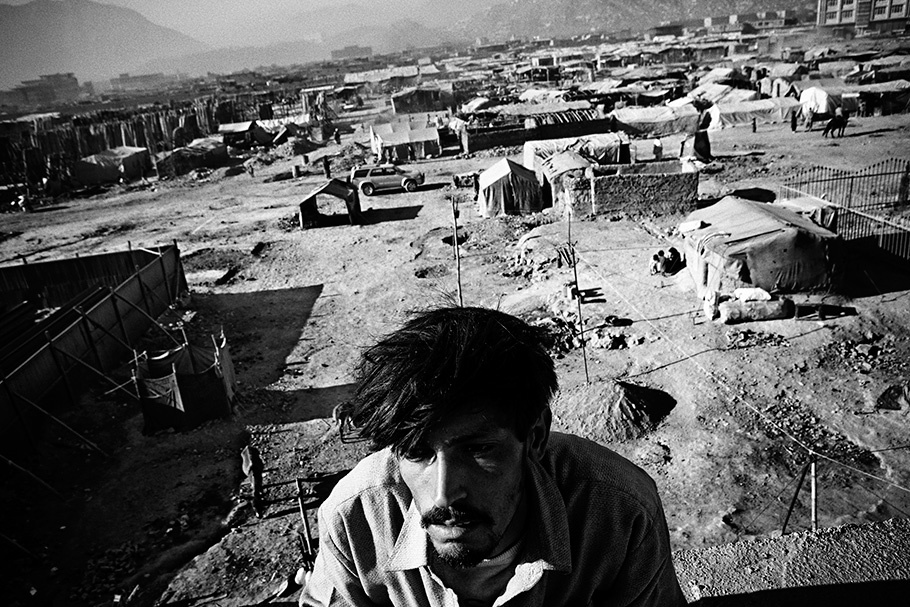 Afghan man waiting for a day job in Chamane Babrak. 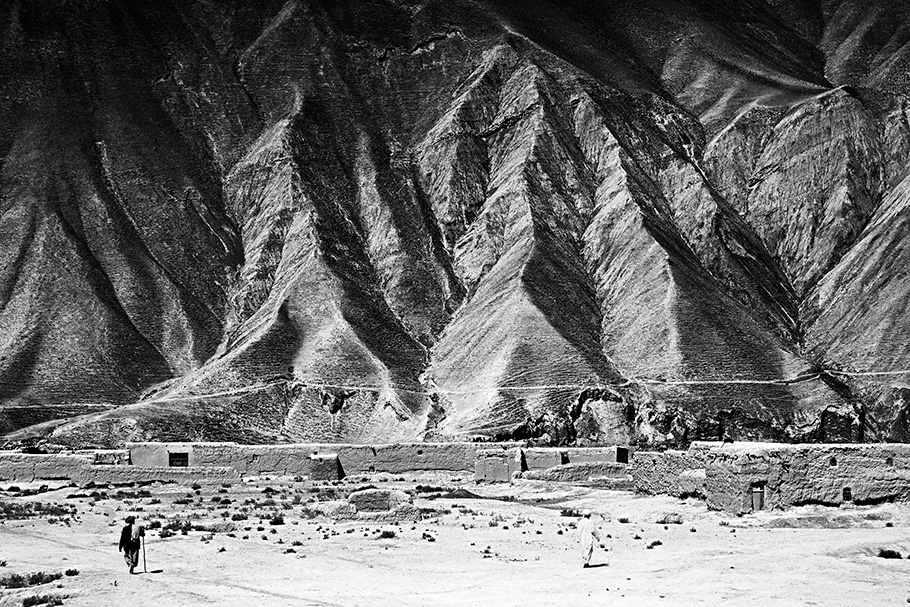 A returnee village in the north. 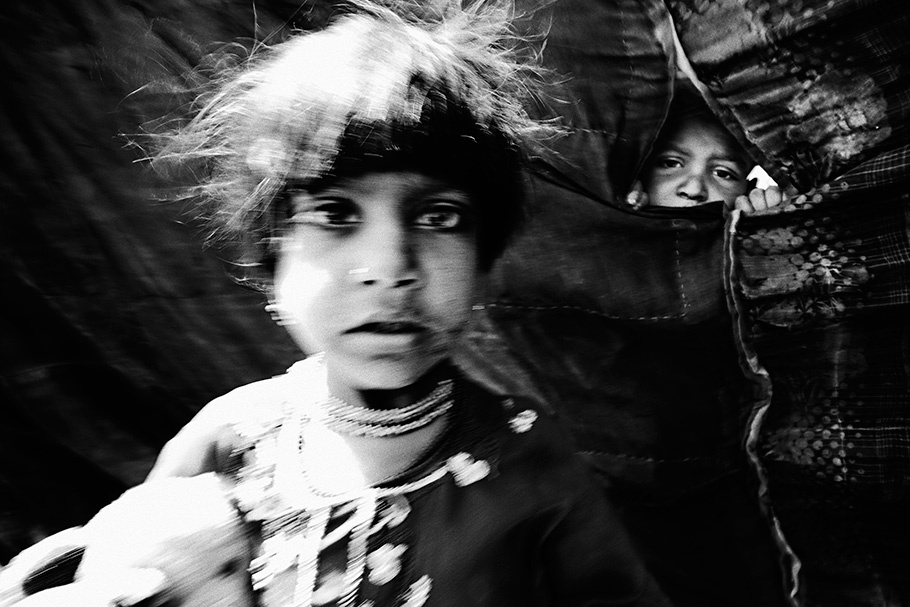 Returnee children in a refugee camp near Kabul. There is no school for them to attend.

Born in Kabul, Afghanistan, Zalmaï Ahad was forced into exile in 1980, at the age of 15, after the Soviet invasion of his country. He is now a Swiss citizen. Since 1989, he has worked as a freelance photographer. Zalmaï’s photographs have appeared in Le Temps, the New York Times Magazine, Newsweek, la Repubblica, and Time, as well as in publications of Human Rights Watch and the UN High Commissioner for Refugees, where he works on different projects. His photographs have been exhibited in Berlin, Dubai, Geneva, Kabul, Los Angeles, New York, Toronto, and Washington, D.C.

His books include Eclipse (2002) about the subject of exile and the plight of uprooted people in six countries; Return, Afghanistan (2003) on the return of exiled Afghan people to their homeland; Silent Exodus (2008) about the hopeless condition of the Iraqi refugees in the Middle East; and Zalmaï pour la liberté de la presse (Zalmaï for Press Freedom, 2009), published by Reporters Without Borders. Zalmaï has attended the World Press Photo’s Joop Swart Masterclass, and earned the Days Japan International Photojournalism Award for 2006 and Photo District News’ annual award for documentary photography.

Eight years after the world promised to rebuild my country, the people of Afghanistan are losing hope and trust in the government and the international community. The introduction of so-called democracy has been nothing more than broken promises and lies. Afghans haven’t seen any positive change in their lives.

Today we are on the edge of falling again into the nightmare we tried to escape. Afghanistan was invaded many times in recent history with great suffering and destruction. In the beginning of 2002, however, Afghans had a lot of hope for their future. Almost four million Afghan refugees returned to their country after three decades of exile.

Then this feeling of hope slowly faded as the fighting continued and the international community, trying to defeat the Taliban in the small villages of Afghanistan, failed to see that the source of the problem was not only in Afghanistan but also in neighboring countries.

The war in Afghanistan is now spreading. Coalition forces are killing and injuring too many innocent Afghan civilians, and the opposition forces are increasing their attacks with equal resolve. Most Afghan refugees and returnees cannot return to their places of origin and instead are forced to settle in urban slums near the big cities like Herat, Jalalabad, Kabul, or Khandahar. Thousands of refugees have come unwillingly, deported from Iran or made to leave their Pakistani-based camps, where many of them were born.

During my travels in Afghanistan in 2008, I witnessed a major humanitarian disaster throughout the country, caused by the ongoing war, the severe drought, and the lack of security. Hundreds and thousands of people are living in makeshift, plastic tents around the big cities, without job opportunities, schools, or medical care. As instability continues to afflict the south of Afghanistan and the drought worsens in the north, people are leaving their homes only to find themselves stuck somewhere else, with little or no support from local NGOs, the Afghan government, or the international community.

Now the international community is talking about how to “gain the hearts and minds” of Afghans. But how can you capture the heart and mind when the body is dying?  While most of the mainstream media focuses on what is taking place militarily, I feel the need to cover the human cost of the war on terror in Afghanistan, to document the extensive human tragedy taking place in my country, a tragedy that still goes unnoticed, and is ignored by the world. I strongly believe that we must see the whole picture if we are to find a lasting solution.