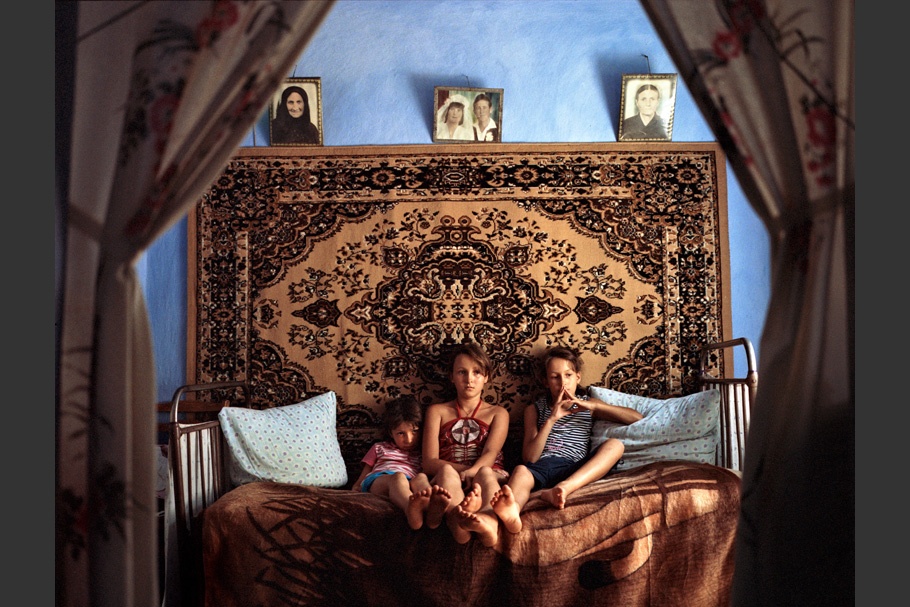 Carolina, Olga, Sabrina, ages, 7, 12, and 10, at home. Their parents are divorced and their mother left four years ago to work in Italy. The girls live alone, and cook, bake bread, clean, and go to school.

Their mother paid 4,000 euros to a human trafficker to get in to Italy. In Moldova, she had worked as a cook. In Italy, she takes care of an elderly woman in Modena, earning 850 euros per month. She regularly sends parcels to her children. She wants to stay in Italy until she has enough money to buy a house for herself and her daughters in Moldova. 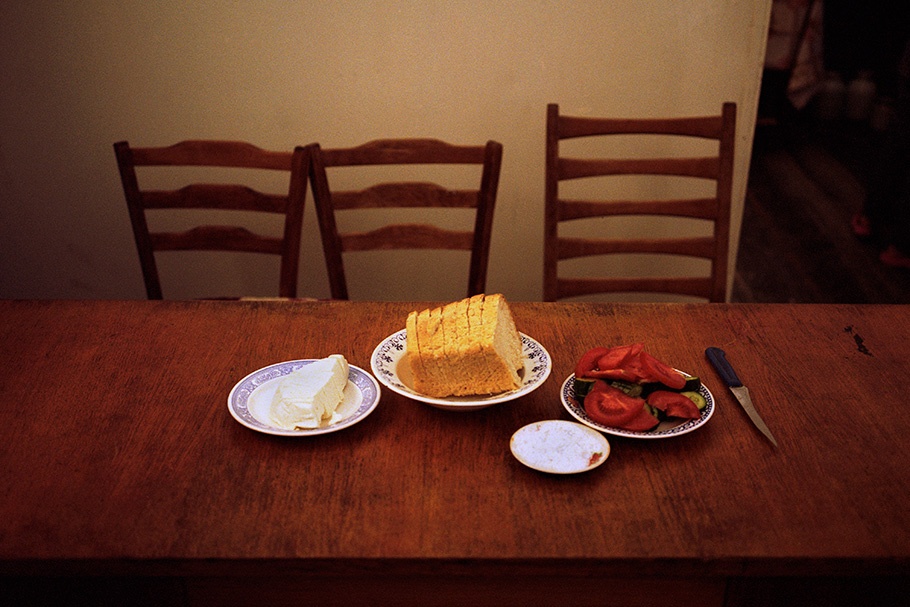 Dinner at Carolina, Olga, and Sabrina's house. The three girls are living alone, as their parents are divorced and their mother left four years ago to work in Italy. 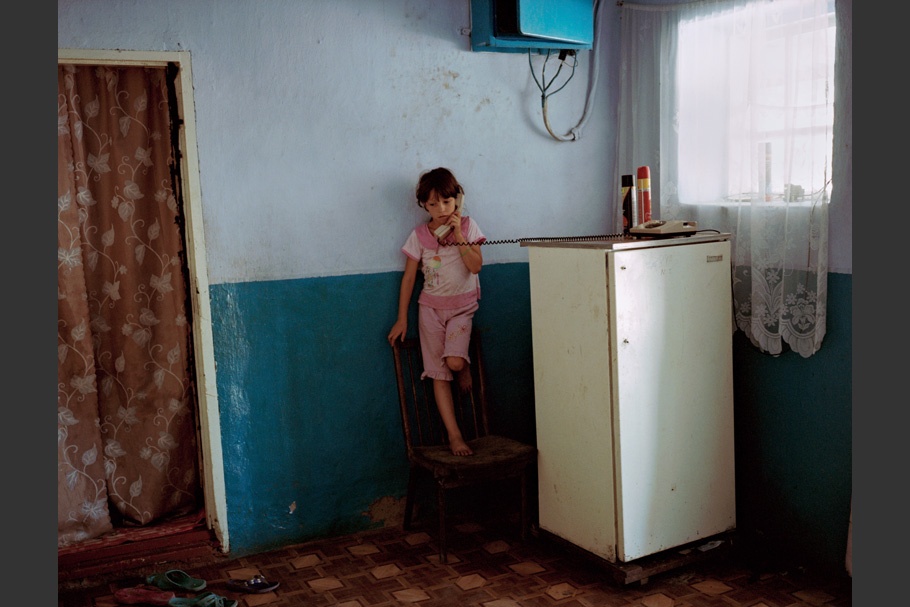 Carolina, 7, on the phone with her mother. Her mother left Moldova in 2006 to take a job in Italy without a work permit. They haven't seen each other since. 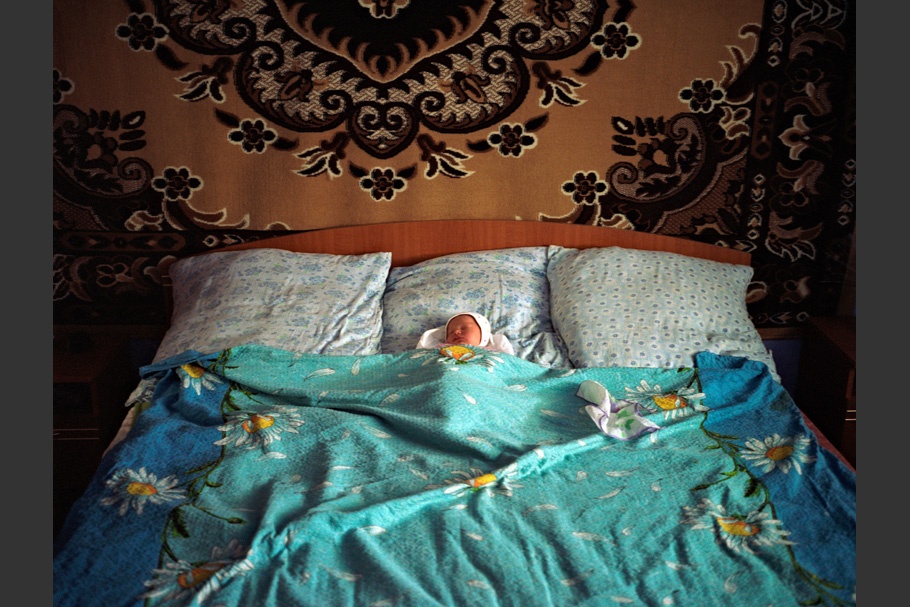 An infant who is cared for by his mother while his father and grandmother work in Italy. 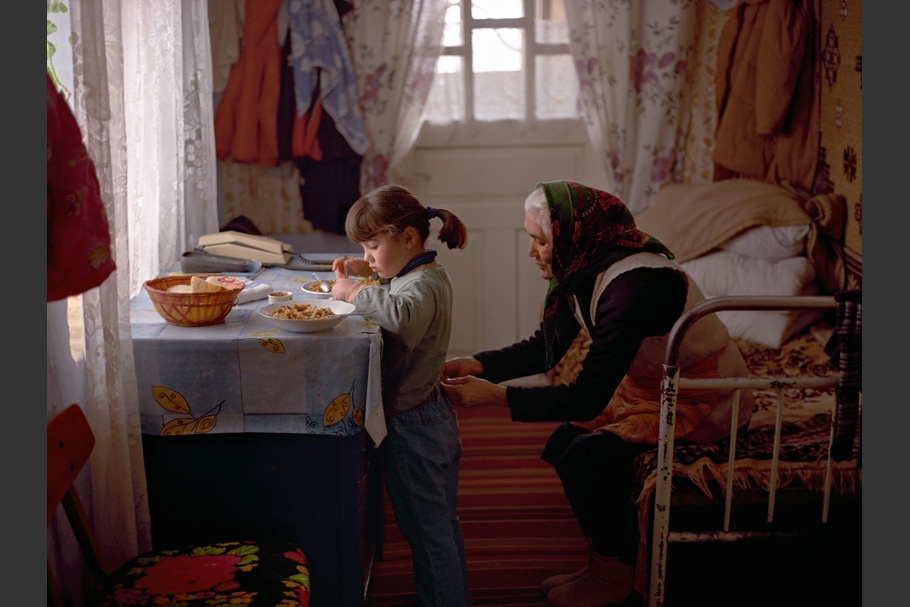 Catalina and her grandmother. Catalina's parents work in Italy. 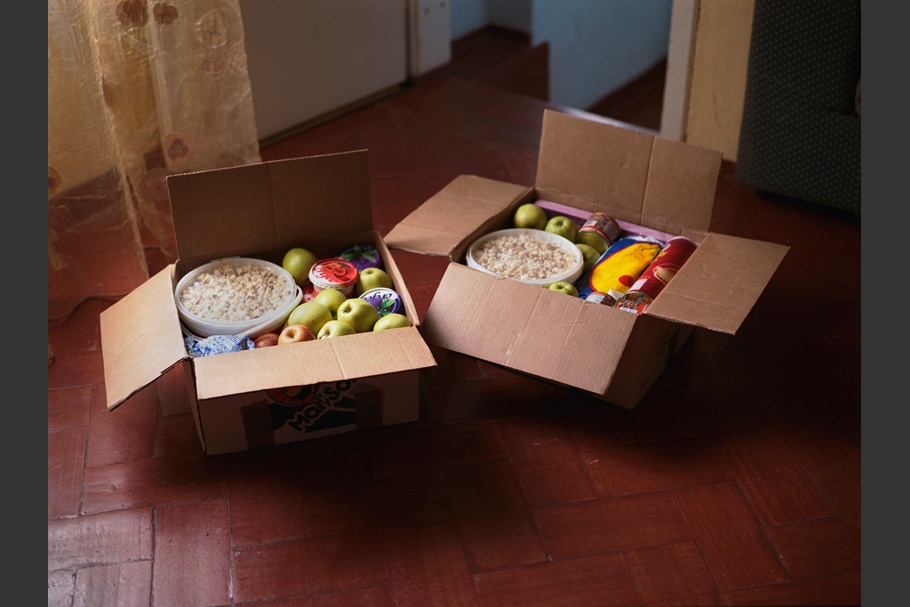 Parcels Lilia packed for her two daughters in Moldova. Besides telephone calls, parcels are one of the few ways for parents to show their love and communicate with their children. 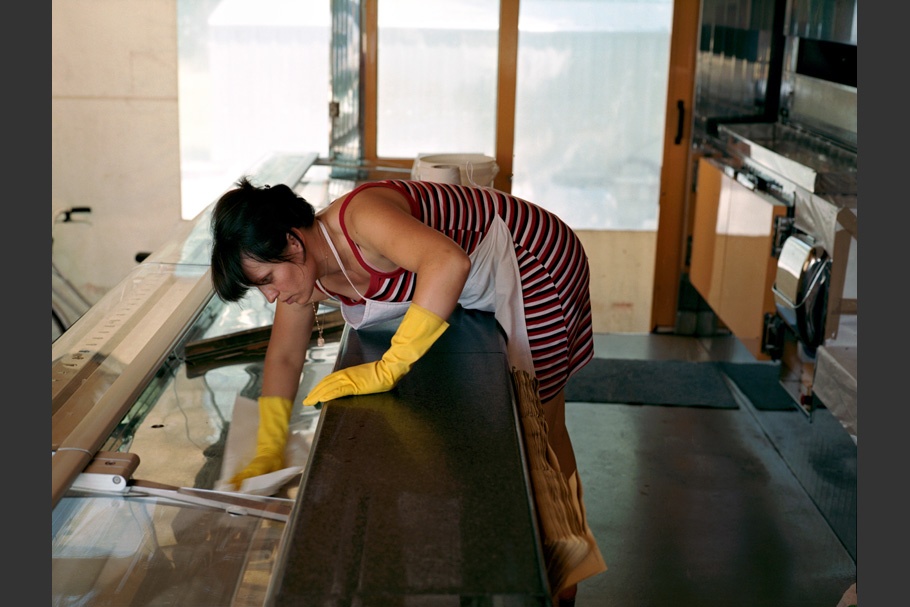 Lilia moved to Italy by herself with a fake visa she purchased for 2,000 euros. Six months later, her husband Georgju followed. They borrowed money from people in their village, but the interest was so high that they ended up paying back a total of 10,000 euros.

Georgju works as gardener and Lilia works as a cleaning lady. They send regular parcels to their parents in Moldova. Their two daughters stayed with their grandparents for the first four years. Now the whole family lives in Italy. The children also came to Italy illegally; Lilia and Georgju paid 3,000 euros for the girls' fake tourist visas. 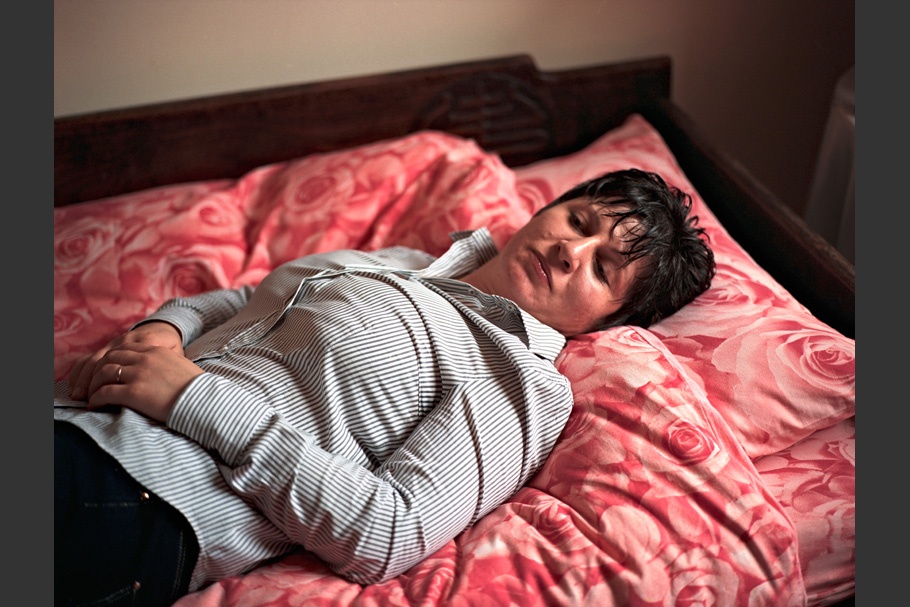 Maria, 38, cleans six different households and earns eight euros an hour. On Sundays, she cleans her landlord's house. Maria left Moldova seven years ago, and has been waiting for two years for permission to stay in Italy. She does not leave the house after dark, as she is afraid to move around without papers. Maria does everything for her 14-year-old son who stayed at home. She wants him to get a good education. She has used her wages to buy him a computer and a mobile phone and to pay for his extra English lessons. 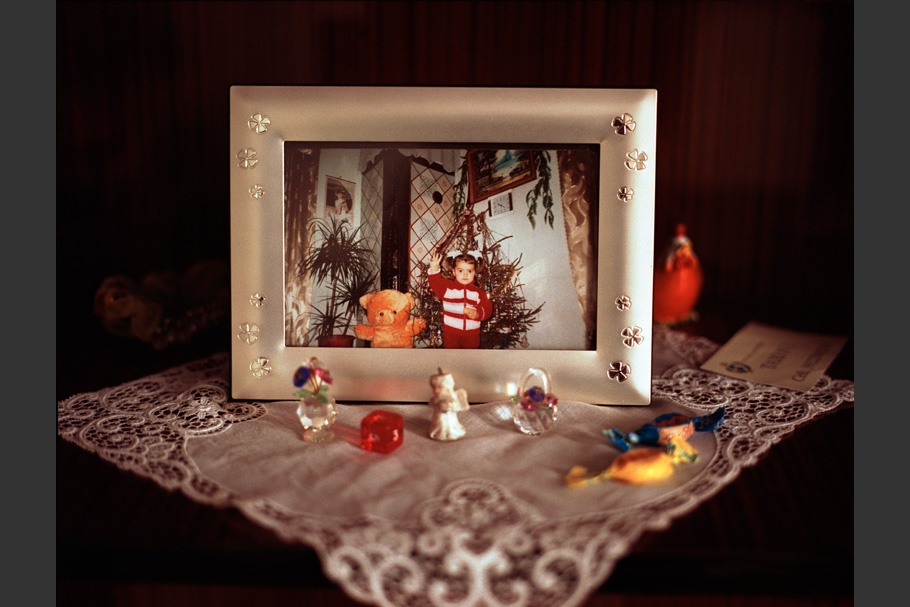 Since Tanja and Valeriu left for Italy four years ago, they haven’t seen their daughter. The girl was one year old when they left, and she lives with Valeriu’s parents. She calls her grandmother “mama.”

Andrea Diefenbach was born in 1974 and finished her photography studies in 2006 at the University of Applied Science in Bielefeld, Germany, with the project AIDS in Odessa. She has worked since 2005 as a freelance photographer for magazines such as Brigitte, DIE ZEIT, GEO, and Stern. She is also pursuing a number of personal projects, with the help of different grants and scholarships.

Her AIDS in Odessa project received an honorable mention at the Fotomuseum Winterthur’s Plat(t)form 2007 photography forum. The project also won the 2007/2008 Documentary Photography Award from the Wüstenrot Foundation and the Museum Folkwang and was published in July 2008 as a book by Hatje Cantz, which was nominated for the Deutsche Börse Photography Prize. The series was exhibited at the Reiss-Engelhorn Museum (Mannheim, Germany) and the CLAMPART gallery in New York.

Dienfenbach’s work has been featured in a number of group exhibitions and photography festivals. In 2009 and 2010, she was an artist in residence in Bosnia and Herzegovina and was selected as a finalist for the 2010 W. Eugene Smith Award.

Diefenbach lives in Wiesbaden, Germany, and is a member of Agentur Focus.

“Whose parents are living in Italy?” asked the teacher as she stood in front of a first grade class in Cirpesti, a small village in southeast Moldova. With a mixture of pride and embarrassment about 20 of the 30 children raised their hands. I was shocked. I knew the statistics on labor migration and remittances. But the lives behind the numbers were staring me in the face as I stood in a cold, leaky classroom and learned that it had been years since most of these six-year-olds had seen their parents who were working 2,000 kilometers away as cleaning ladies or harvest helpers. This experience and others inspired me to continue my photography in Moldova. My images aim to look behind the statistics to reveal the impact of migration on families and society and ask how high a price parents and children pay for it.

Moldova is the poorest country in Europe. Forty percent of the people live below the poverty line. Meanwhile, more than one-third of the adult working population has left the country. According to official estimates, at least 690,000 of the 4.3 million Moldovans are living and working abroad—mostly in EU countries and in Russia—although the actual number varies according to different sources and probably exceeds one million. That makes Moldova one of Europe’s leading countries in labor migration.

The remittances that the migrant workers send home are a major factor in preventing the economy from collapsing. Yet labor migration has many downsides, including a “brain drain,” in which Moldova’s most active and educated people search for better economic opportunities abroad. Although many wind up working as unskilled laborers for low pay, this work still brings more than what they could earn at home. Migration also contributes to the disintegration of families and has torn the social fabric of Moldovan society. Whether in cities or the country, there is hardly a family in which at least one parent is not working abroad. In many cases, the children remain in Moldova and live with relatives, acquaintances, or even on their own. They often don’t see their parents for months, or years.

For this project, I photographed parents who had left Moldova without work permits to work in Italy, the most popular destination country. I also visited the children who were left behind in Moldova. Some of these children live in good homes, but others are often neglected and have no guardians. It is common for parents not to see their children for several years, as the parents often remain in Italy for long periods to obtain permits. Instead, they communicate through phone calls and parcels. At least once a month, minibuses transport money, sweets, and gifts—one of the few ways for parents to show their love.