Persecution of Homosexuality in Uganda 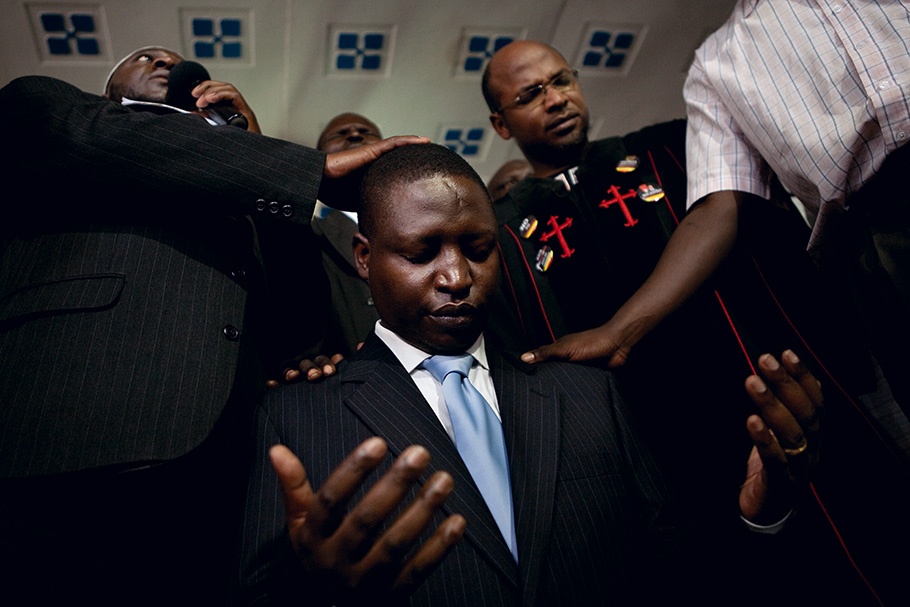 David Bahati (center), the architect of the antihomosexuality bill, is blessed by Pastor Martin Ssempa (R), Sheikh Badruh (L), and other religious leaders during an antigay church service at the Christianity Focus Centre. 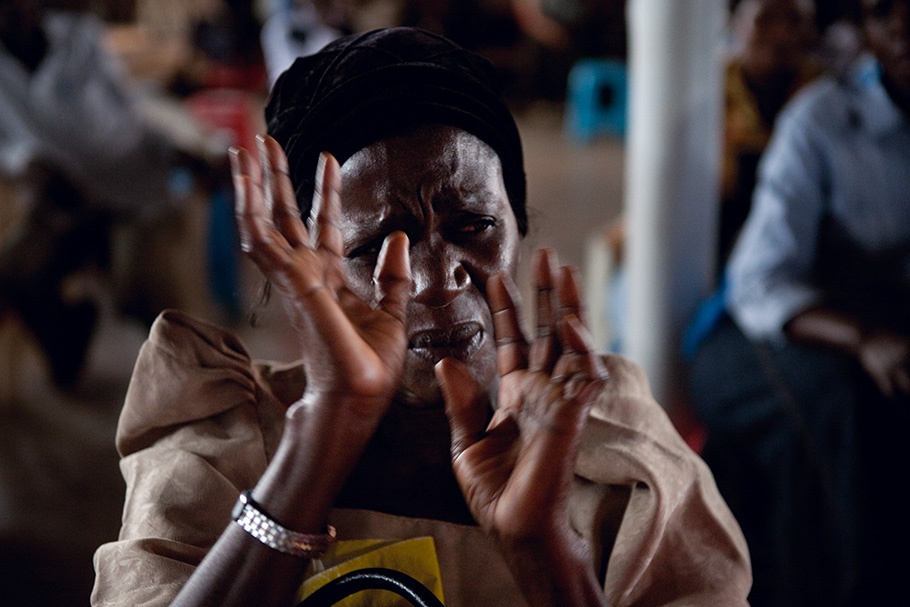 Demonstrators carry signs with homophobic messages at an antigay rally.

A traditional healer who is gay leads a ritual to prevent the passing of the antihomosexuality bill in the Ugandan parliament.

One of the few bars in town that is deemed a "safe zone" by the gay community.

Born in France in 1976, Bénédicte Desrus is a documentary photographer who is based in Kampala, Uganda. She has worked throughout Africa, Europe, Latin America, and the United States, focusing on humanitarian and social issues while also covering important breaking news. Her photography explores the lives of people ostracized by society and the communities they form to survive and find respect.

Her work is featured in newspapers and magazines, such as Elle, Harper’s Magazine, Maclean’s, Le Monde, Liberation, the New York Times, Time, and the Wall Street Journal. Her photography has been exhibited in galleries and museums in Europe and Mexico. She is represented by the Sipa Press photography agency.

Uganda has criminalized homosexuality for over a century. Yet today, one of the most punitive laws against homosexuality ever conceived threatens the lives of the country’s gays and lesbians. In 2009, Ugandan legislator David Bahati, a member of the United States–based fundamentalist Christian group The Family, introduced the bill in parliament. If passed, it could lead to the execution of people who have gay sex more than once, the imprisonment of heterosexual people who fail to turn gays and lesbians over to the police, and the abolition of all organizations that support LGBT (lesbian, gay, bisexual, transgender) rights.

The possible passage of the bill hangs like a Damocles sword over the LGBT community in Uganda. Each day that no decisive action is taken to throw out the bill, it encourages homophobia to spread and allows political and religious leaders to scapegoat the LGBT community for society’s ills and their own personal gain. Hundreds of men and women have already been “outed” by tabloid newspapers in Uganda. Their names, photos, and addresses are regularly published under headlines such as “More Homos’ Faces Exposed!” and “Men of Shame.”

I started this project to tell the stories of LGBT human rights defenders living and working in this environment. There is, for example, the 26-year-old gay man who has been involved in gay rights activism for years. He has been arrested and jailed twice, and harassed and threatened by neighbors after being outed in a local paper and identified by name and picture on television. Part of my work documents his story of enduring prejudice, discrimination, and loss—a story shared by most of the LGBT community.

By contrasting images of this community with photographs depicting the increasingly hostile environment in which they live, I aim to honor the bravery of those who have decided to fight against the bill while others look away. If the bill passes, persecution against the LGBT community will increase. Yet this bill has also strengthened the Ugandan LGBT community’s solidarity and its struggle to continue fighting for equality. This story is not only about being LGBT in Uganda, but also about the common struggle for equality for the LGBT community globally.