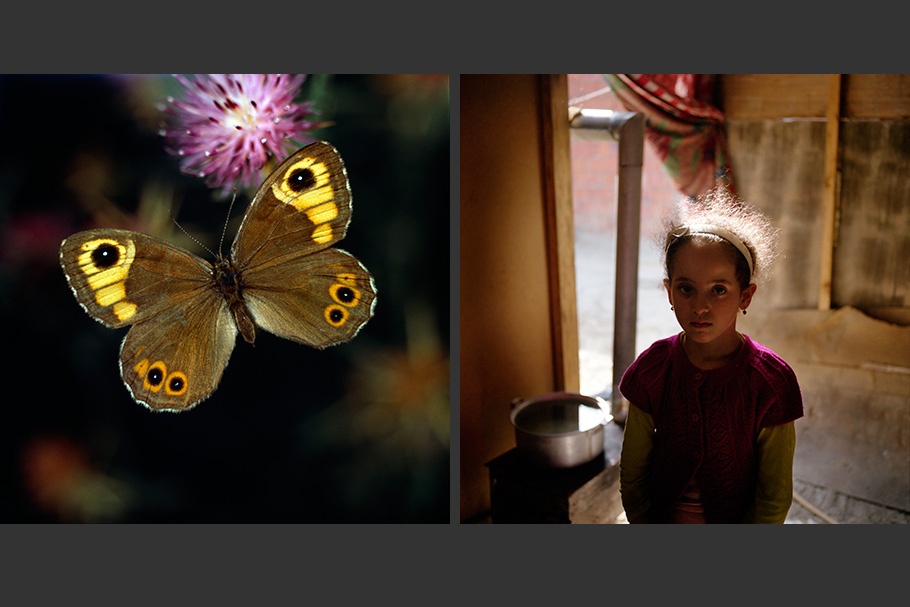 Right:
Girl living in a cardboard home on the top floor of an unfinished hospital used for refugee housing since 1993. Baku, Azerbaijan, 2010. 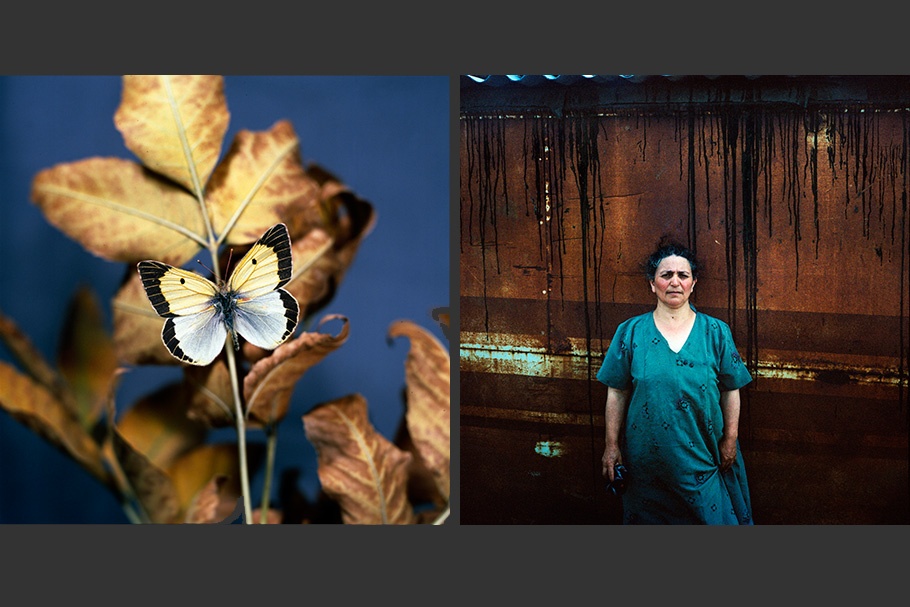 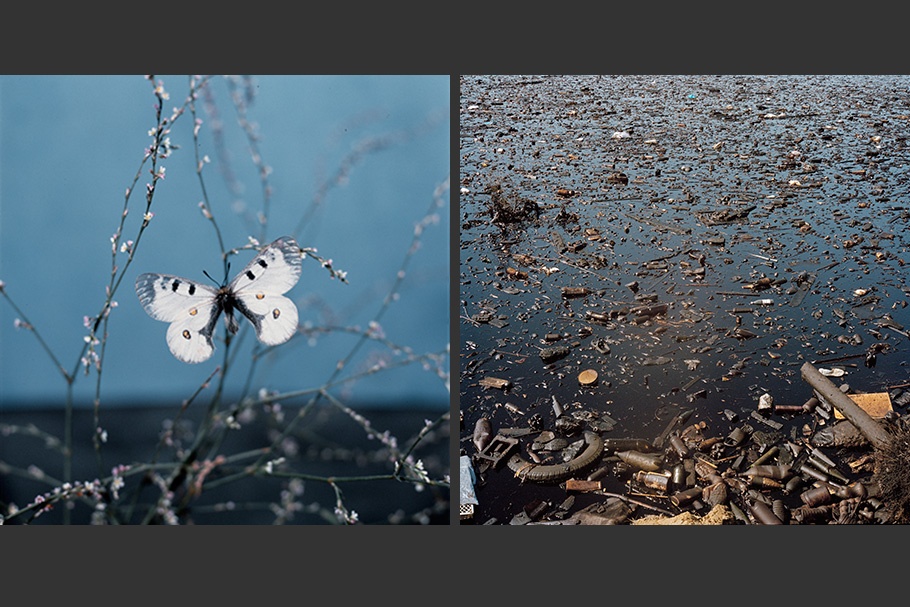 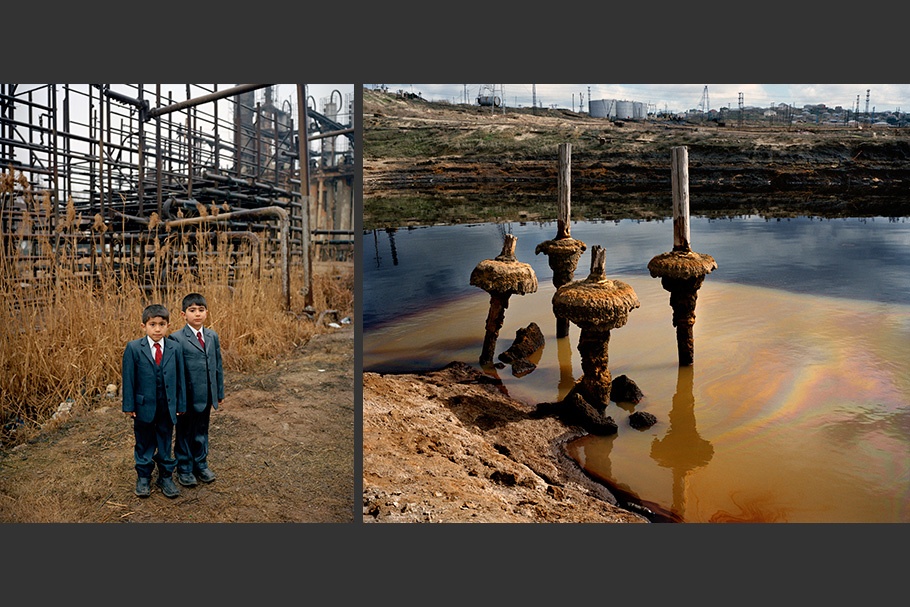 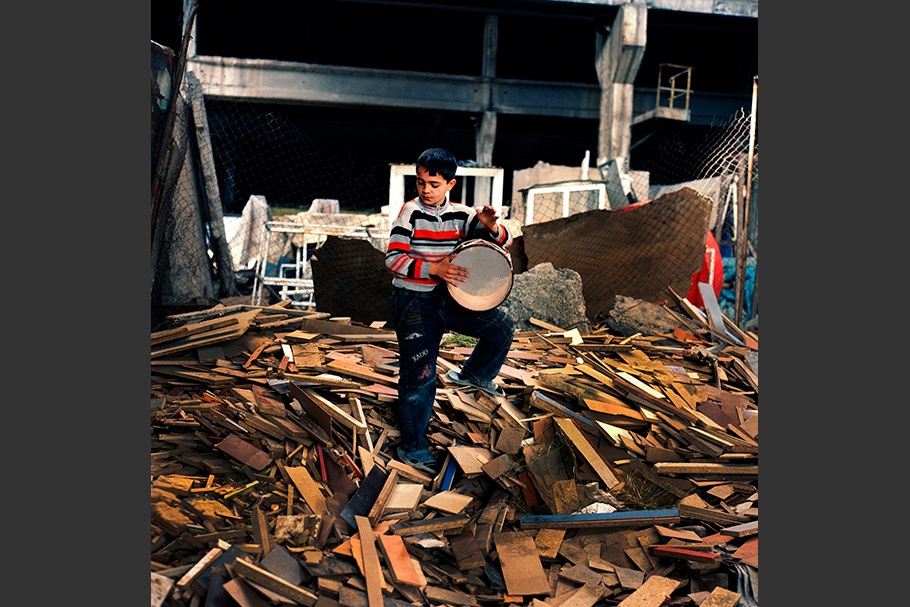 Boy playing his drum on a heap of waste at a refugee settlement in a former building materials factory. Baku, Azerbaijan, 2010.

Born in 1977 in Baku, Azerbaijan, Rena Effendi has been working as a photographer since 2001. Her documentary work has largely focused on the impact of the oil industry on the lives of people in Azerbaijan. Over a six-year period, she followed a 1,700 km oil pipeline from Azerbaijan through Georgia and Turkey, collecting stories along the way. The journey resulted in her first book, Pipe Dreams: A Chronicle of Lives Along the Pipeline, published in 2009.

Effendi has won several international photography awards including the FiftyCrows International Fund for Documentary Photography Award (2004); the Mario Giacomelli Memorial Fund award (2006); the Getty Images Grant for Editorial Photography (2006); the National Geographic All Roads Photography Award (2008); the Magnum Foundation Young Photographer in the Caucasus Award (2009); and the Prince Claus Fund Award (2011). In 2005, she participated in the World Press Photo Joop Swart Master Class and in 2007, she was chosen for Photo District News’ 30 New and Emerging Photographers to Watch. In 2009, she was awarded a production grant from the Open Society Foundations’ Documentary Photography Project and was nominated in 2010 for the Russian State “Innovation” contemporary art award.

Effendi’s work has been exhibited worldwide including at the Visa pour l’Image International Festival of Photojournalism in Perpignan, France (2006), at the 52nd Venice Biennale (2007), and at the Istanbul Biennial (2009). Her images have been widely published in the international press, including Newsweek, Time, the Financial Times, the Sunday Times, the International Herald Tribune, Marie Claire, L’Uomo Vogue, Courrier International, and Le Monde.

Effendi is based in Cairo and represented by the Institute for Artist Management worldwide and Agency.Photographer.ru in Russia.

In 40 years of dedicated research my father Rustam Effendi, a dissident and entomologist specializing in butterflies, hunted, classified, and encased in glass boxes over 90,000 butterfly species from the Caucasus and Central Asia. Today, his butterfly collection, inherited by the Republic of Azerbaijan and sadly neglected or sold, has turned to dust, and the only surviving evidence of his life’s work are 50 photographs of endangered butterflies—taken for a book that was never published.

Oil Village pairs my father’s pictures of the fragile perfection of these endangered butterflies with my own pictures of the people and lands affected by the oil industry in Azerbaijan—where the oil boom has resulted in the concentration of nearly half of the country’s population in and around its capital of Baku. Lack of environmental stewardship, corruption, and governmental negligence have combined with industrial and petroleum-related production to create an environmental catastrophe. Due to overpopulation, urban decay, and a lack of social services, Baku has been named by some as the most polluted city in the world. Though recent investments by the government have brought parks and fountains to cities and villages everywhere in the country, access to potable water, reliable electricity, and decent health and education services is still a challenge.

My photographs tell stories of communities living dangerously among this industrial ruin, trapped in difficult circumstances and without any benefit from the oil which still contaminates the land on which they live. The people I have been photographing live on the edges of cities, of poverty, and of life, far from the extreme wealth of those who profit from the oil revenues. They live in makeshift homes, unfinished buildings, oil fields, and abandoned factories. Many of them escaped the conflict between Azerbaijan and Armenia in the contested region of Nagorno–Karabakh and are likely to have come from vulnerable rural populations that lost everything and fled to the city in search of safety and work. Although they are no longer living in villages, they still breed chickens among the metal waste of factories and hang their laundry on oil rigs. Two decades later, they continue to endure inhuman conditions: the air they breathe, the water they drink, the playgrounds for their children are contaminated and hostile. Yet life goes on in this dangerous urban concoction—a boy plays his drum on a heap of construction waste, a man takes an oil bath as a form of therapeutic treatment, and a woman is expecting a child in her cardboard home.

Oil Village aims to promote dignity in an undignified world, where corruption eats the benefits most needed and deserved by some of Azerbaijan’s most vulnerable citizens. This project—about hopelessness and resilience, suffering and regeneration—resonates on a personal, community, national, and global level. In my time working with these communities, I have witnessed that in spite of all possible forms of rejection, the human spirit has the resilience of metal and the lightness of a butterfly.

With Azerbaijan serving as the point of origin for the massive Baku-Tbilisi-Ceyhan oil pipeline, the issues around the use of resource revenues have become ever more pressing—and the need for good governance and accountability all the more urgent. Since before the pipeline’s launch in 2005, the foundation has been at the forefront of efforts to advocate for the people directly affected by Azerbaijan’s extractive industries. Its work has yielded concrete results, such as persuading an oil consortium to repair roads damaged during the pipeline’s construction.

Revenue Watch Institute / Publish What You Pay
The Revenue Watch Institute, supported by the Open Society Foundations, promotes responsible management of oil, gas, and mineral resources for the public good. With effective revenue management, citizen engagement, and increased transparency, natural resource wealth can drive development and national growth. Revenue Watch partner Publish What You Pay is a coalition of over 300 organizations worldwide calling for the mandatory disclosure of payments by oil, gas, and mining companies to all governments for the extraction of natural resources.