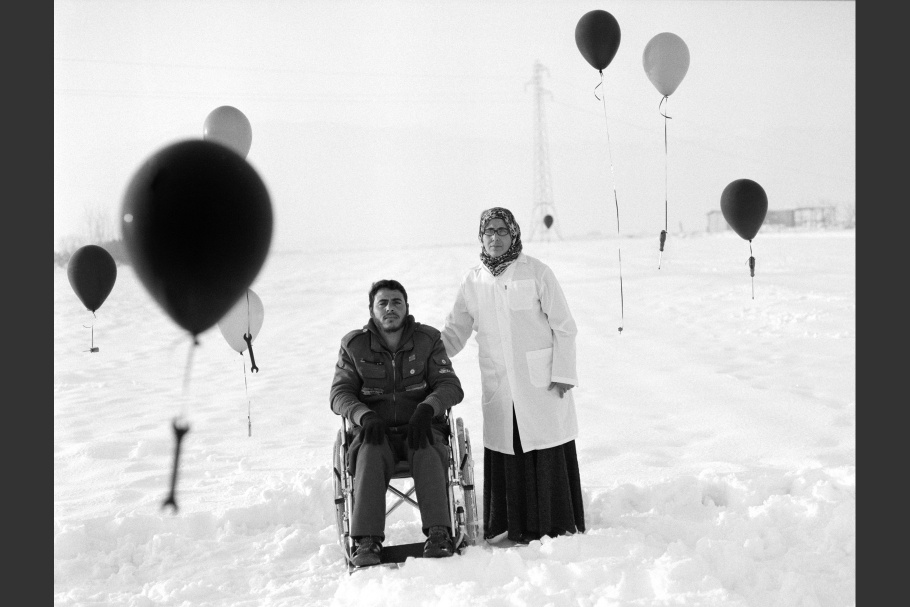 “For a moment, I felt like we were talking to a car mechanic. We are refugees, but still humans.” —Faten, 35 years old, Lebanon

Yassin and Faten are from Homs, and they have five children: Mohamed (nine years old), Lama (seven years old), Siham (six years old), Khadija (four years old when she was killed by a rocket bomb in her yard while waiting for her father), and Khadija (one year old).

Faten said, “The war killed my mother and three brothers. I don’t want to go back to Syria, that land will make me remember a lot. I just want a new land.”

“I used to have my own construction workshop, but in Lebanon I worked as a lumper,” Yassin said. “My co-worker pushed me from the fourth floor, and now I am paralyzed.”

Faten adds, “At the day of Ahmad's surgery, the surgeon told my husband, ‘I can't go ahead with the surgery on your back because I can't find the screwdrivers.’ Now I dream of being a physiotherapist, to help my husband and other injured people, and to have all the screwdrivers around me.” 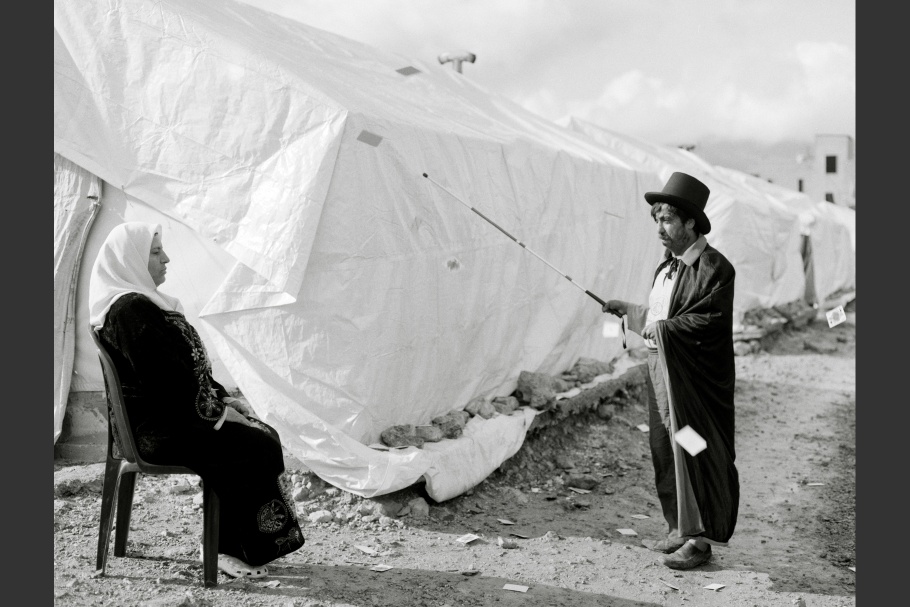 “Because my wife is blind … I tell her the stories of her favorite TV series, and sometimes I change the script … to create a better atmosphere for her.” —Bassam, 39 years old, Lebanon

“I was burned at the age of six months. My dad left my mother for that reason. Later I decided to marry a woman who couldn’t judge my appearance: My wife is blind and partly deaf. In this camp, we’ve been visited by every possible NGO, they studied my wife’s case a lot, and in the end they left us with this cane.” 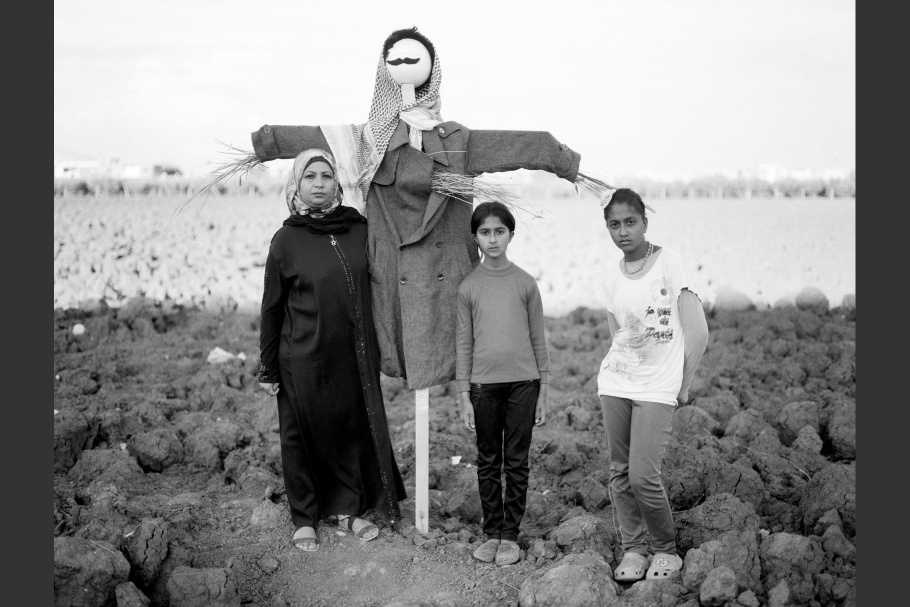 “The role of the man changed during the revolution. My husband didn't dare go to the streets because of the checkpoints, so I had to do most duties. But at least, before we divorced, he was useful to keep the harassers away from me and my daughters. Someone told me, ‘Yes, I can get you a job, but it would cost you one night.’” —Rawd, 40 years old, Lebanon 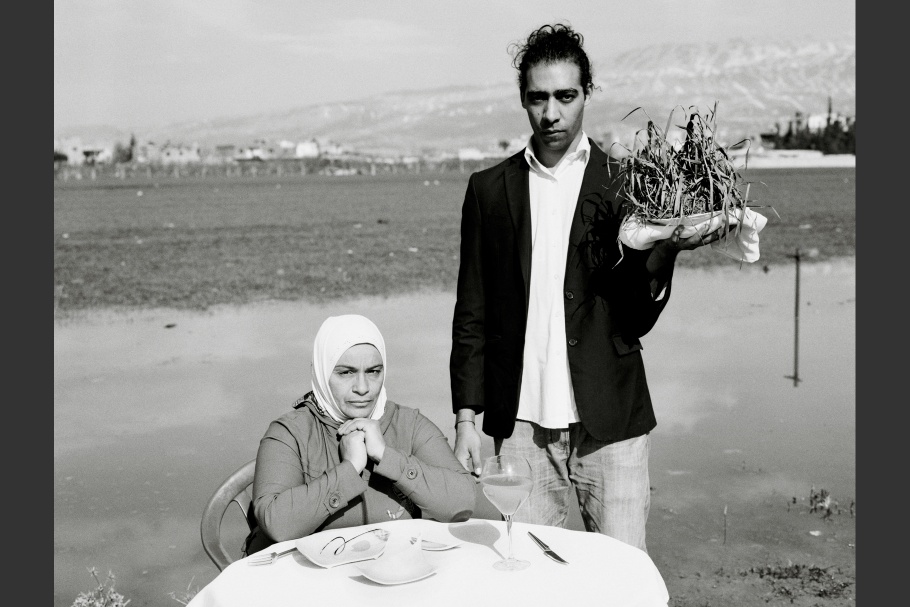 “We had to eat grass, but I couldn’t pass it through my throat. Yet I forced myself to swallow in front of the children so they would accept it as food.” —Amenah, 41 years old, Lebanon

Amenah, a Syrian-Palestinian, used to live in Yarmouk in southern Damascus, and now she is a refugee living in a tent in Bekaa, in the north of Lebanon.

After the conflict in Yarmouk, the neighborhood encountered a strong siege in 2013, causing hundreds of people to die from hunger. After seven months inside the siege, Amenah and her children managed to escape Yarmouk and emigrate to Lebanon, but her husband was stuck in Damascus because Lebanon refused to host new refugees.

During the siege and two months after, she lost 70 kilos (154 pounds). Because of the air strikes, starvation, and deaths, she left Yarmouk with anorexia. She couldn't eat even in Lebanon. 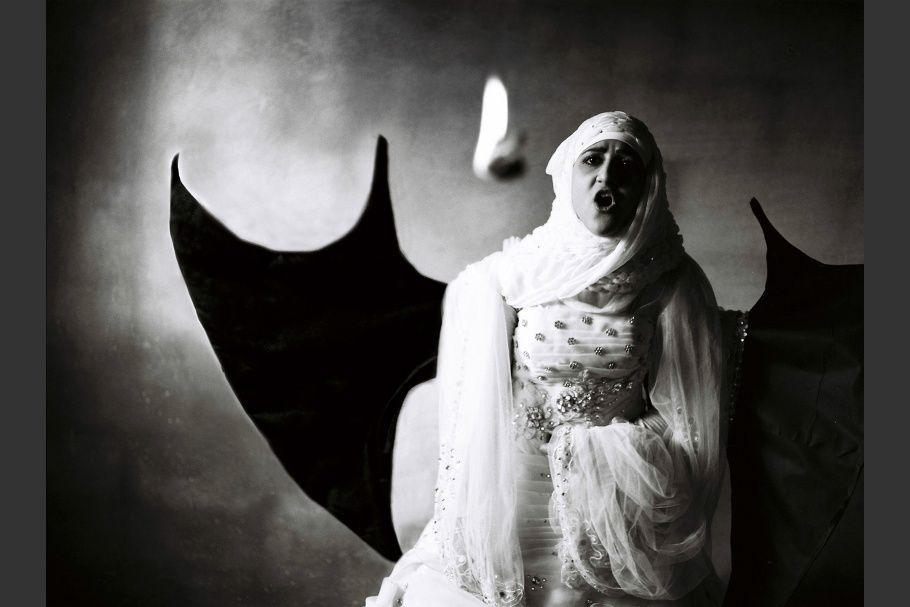 “I wish to become a dragon and burn the scarves and everything in that tent. —Kawthar, 16 years old, Lebanon

“My husband was a 32-year-old refugee from the same hometown as me. He lived in the next camp. I never liked him, but I wanted to help my mother. We are five girls and my father left us at the beginning of the war.

I was so afraid the first night. I didn’t let him touch me, so he start beating me; then his sisters tied me by my scarves, ripped my dress, and one of them was touching me. I was yelling and resisting. To stop the beating I had to lie: I told them that I was not a virgin. The next day my uncle came and beat me because I brought shame to the family. In the end we had sex because I wanted to prove to everyone that was a virgin.” 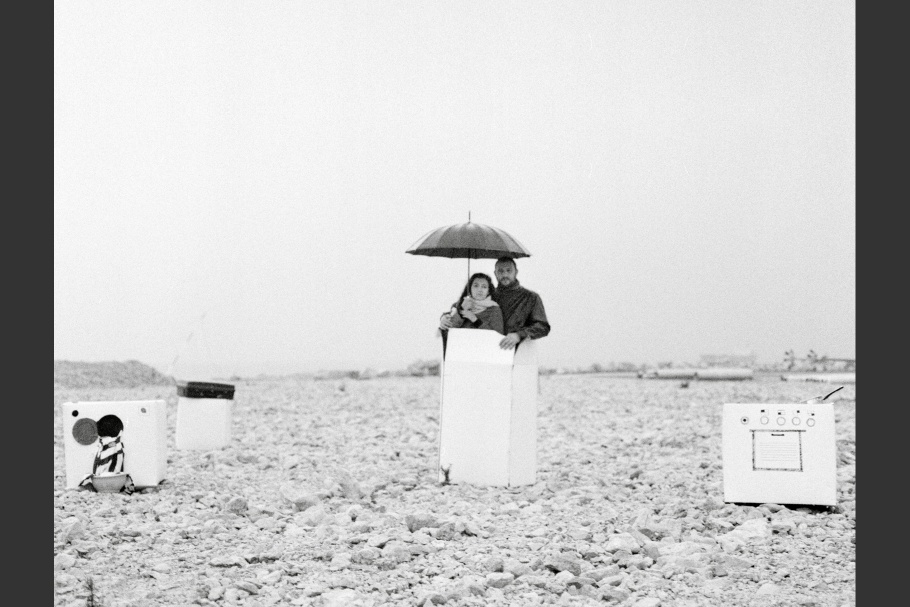 “In Lebanon, I found myself in narrow places. I start feeling anxious now when I am in an open space.” —Forat, 26 years old, Lebanon 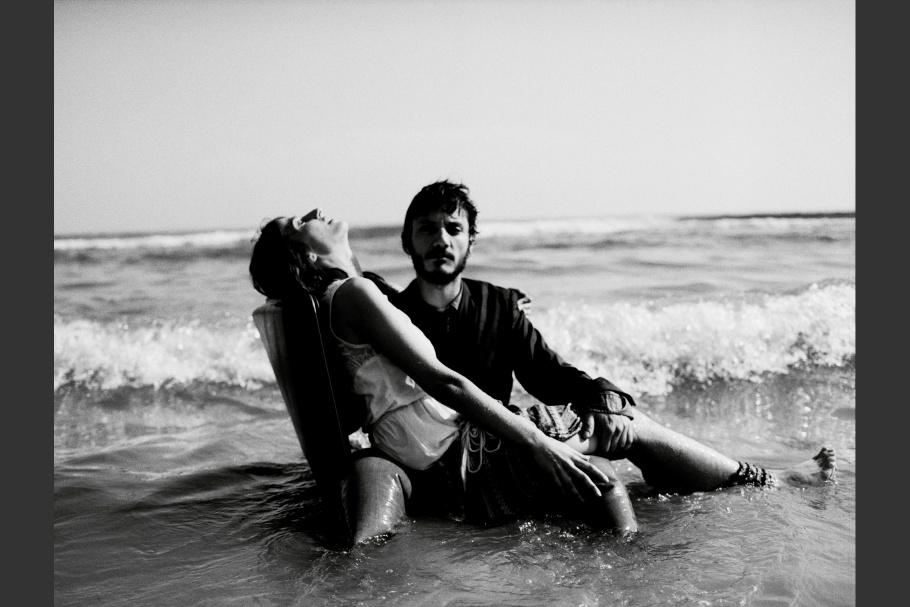 “In Lebanese society, we are outsiders. We were not able to have the same privacy in Syria.” —Maher, 30 years old, and Naleen 28 years old, Lebanon 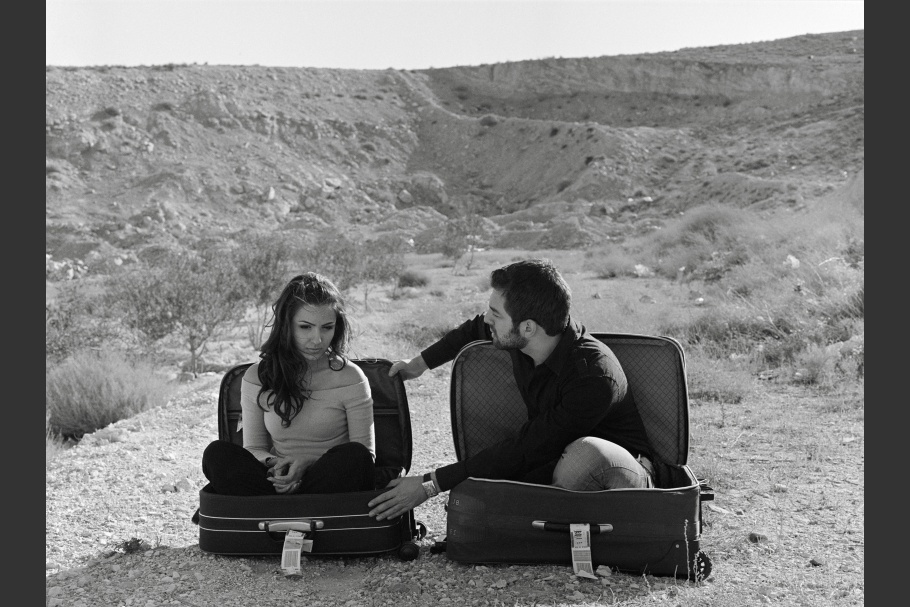 “In Syria you question yourself if you really feel ‘home’ at home. For me, home is whom you live with, not where you live.” —Omar Imam

This image was made in 2008, prior to the creation of Live, Love, Refugee. Even before the civil war, feelings of dislocation and home were evident in the artist’s work. 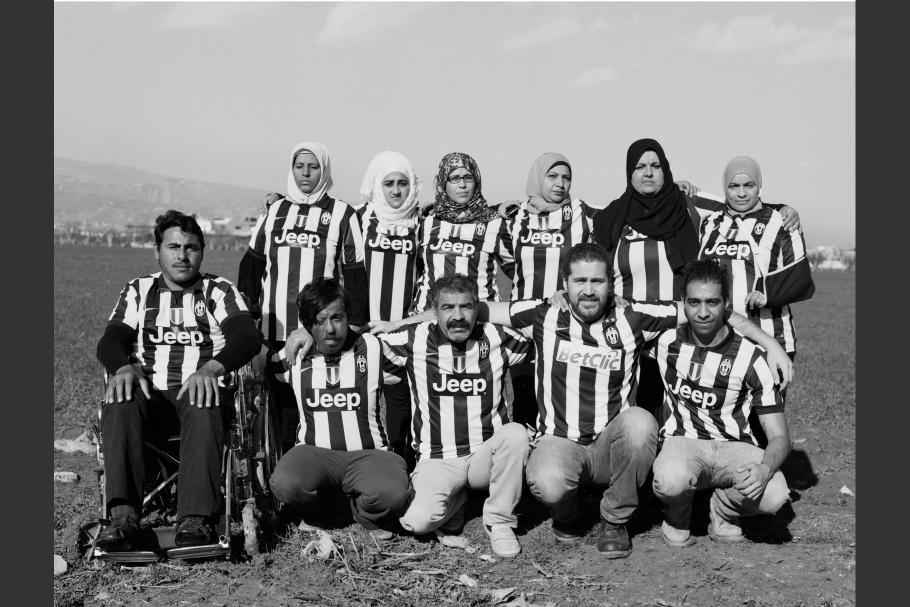 “Through this project, I was able to rediscover my story through their stories. I’m a Syrian refugee myself, and we are making one team.” —Omar Imam, 37 years old, Lebanon

The artist, Omar Imam (bottom row, second from the right) stands with all the subjects of Live, Love, Refugee, posing as a soccer team in a group portrait. The “players” came from different backgrounds in Syria, but they ended up as one team in Bekaa, Lebanon.

Omar Imam (b. 1979, Syria; lives in the Netherlands) is a photographer and video/installation artist. His photographic works oscillate between mundane documents and sketches of utterly inconceivable dreams. Using irony and a conceptual approach, Imam responds to the violent situation in Syria. After leaving Damascus in late 2012, Imam began making fictional short films and often must publish his work under a pseudonym.

Imam’s Live, Love, Refugee has been exhibited in 14 countries worldwide, and his work has been published in Aperture, the Huffington Post, Il Manifesto, the New York Times, and Zeit Online, among others. He received the 2017 Tim Hetherington Visionary Award for his latest project, Syrialism, and is also an artist in residence at the Rijksakademie (2018–2019).

Live, Love, Refugee seeks to disrupt recurrent and abstract representa­tions of Syrian refugees by replacing numbers, reports, and statistics with visual interpretations of hallucinations, fears, and dreams. The conflict in Syria has created the world’s largest refugee crisis since World War II. Over 11 million people—half the Syrian population prior to the conflict—is displaced, with five million forced to flee the country altogether. In refugee camps across Lebanon, I collaborated with individuals through a process of catharsis, one I believe to be deeply healing amidst the nightmare of the living conditions in these camps.

I asked my collaborators to recreate their dreams: dreams of escape, love, and terror. Employing both surrealism and realism to create complex photographs, I encourage desensitized viewers to imagine and understand these lived experiences, which are too often shown through an oversimplified and violent lens.

These collaborative images evoke the deepest and darkest inner worlds of those persisting every day while their roots stretch further from a home left behind. They seek to challenge victimization of migrants and offer entry into the strength from which our humanity stems.