After War: Veterans from a World in Conflict 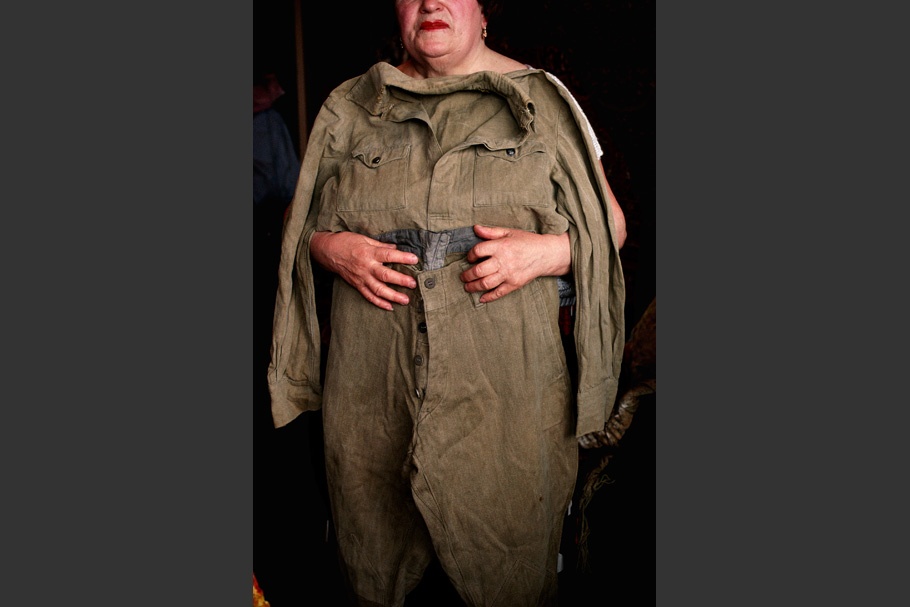 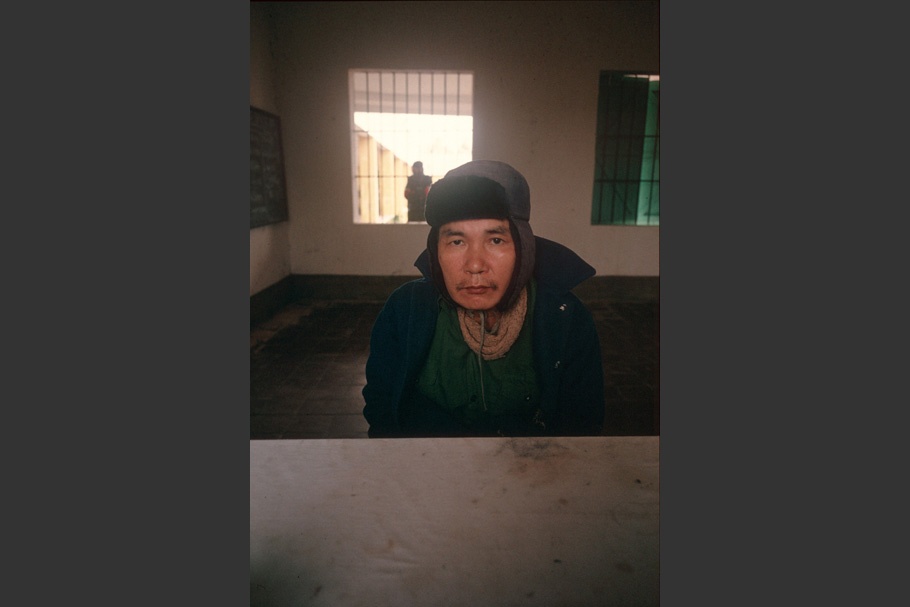 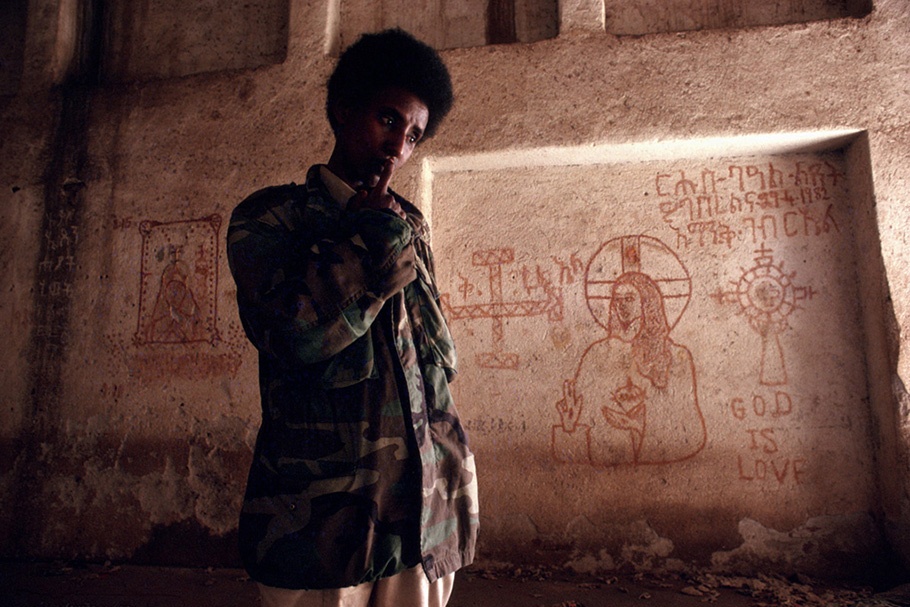 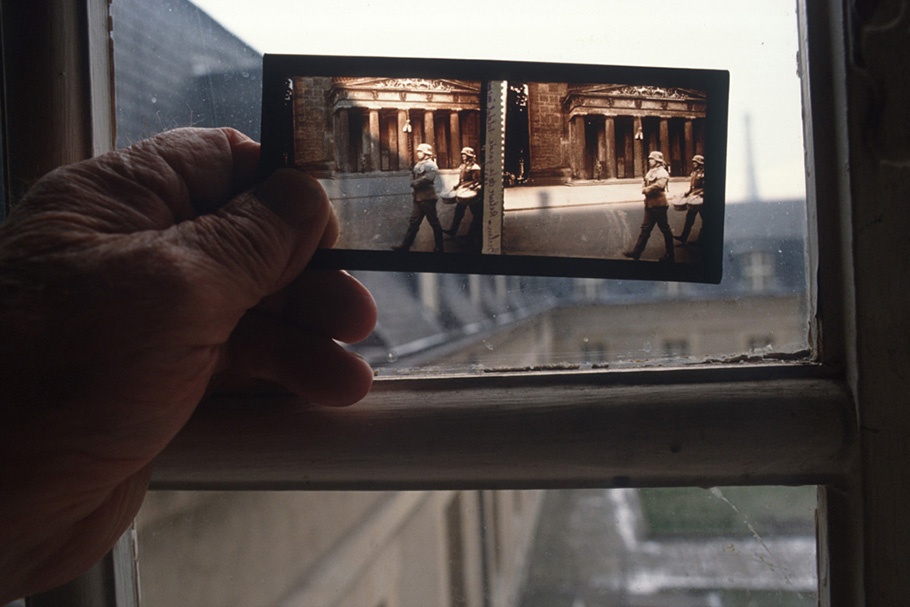 Pierre Saunier.
French veteran of World War I with a photograph he made of the changing of the guards at the Schinkelwach building (eternal flame for the unknown soldiers) in Berlin, 1937.
Institute Nationale les Invalides, Paris, France.
February, 1991. 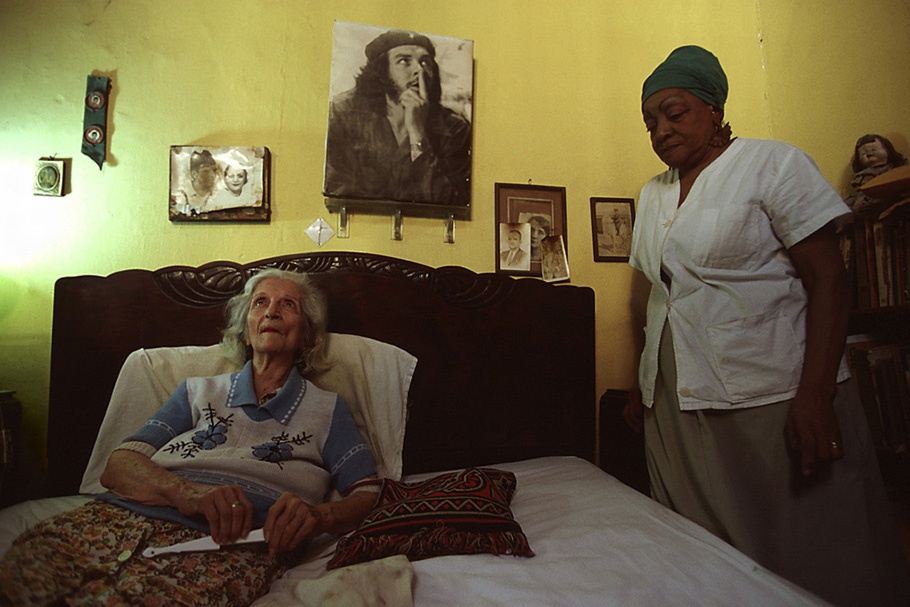 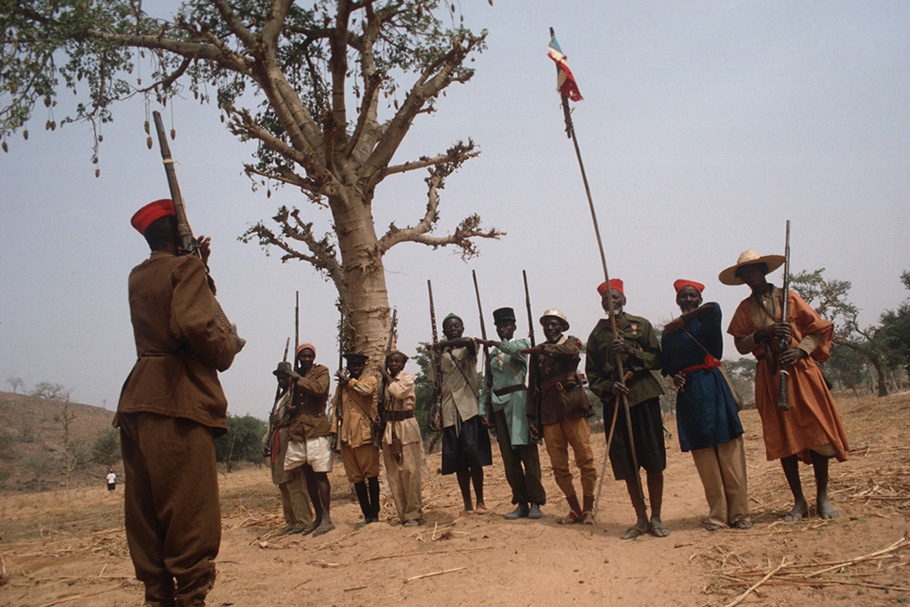 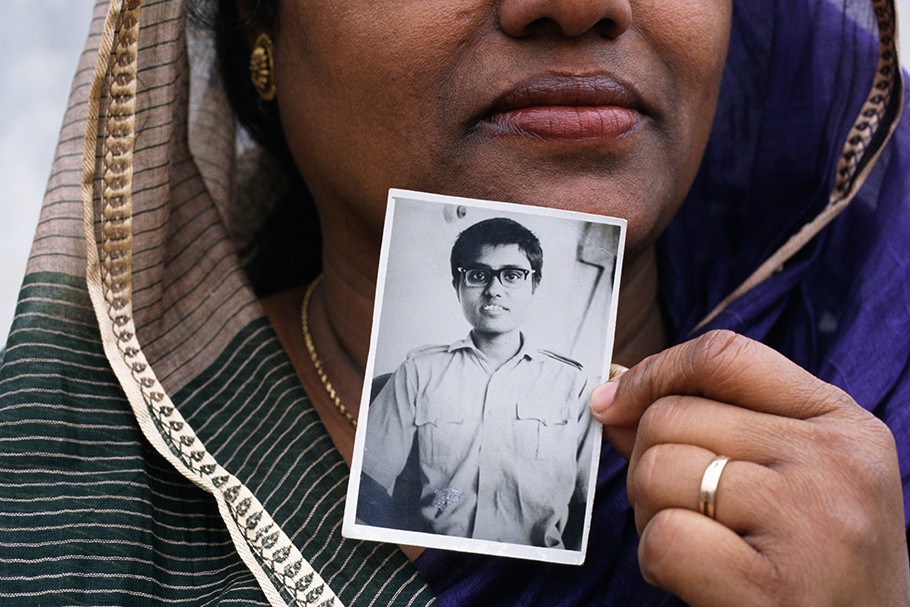 Shirin Banu Mitil with a photograph of herself dressed as a boy.
Served: The Bangladesh War of Independence.
Dhaka, Bangladesh.
February, 1998. 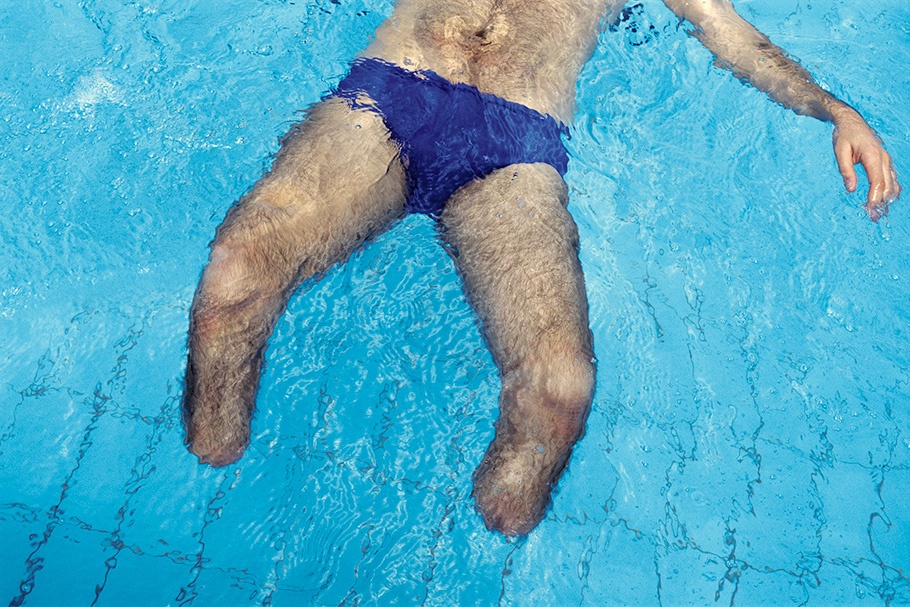 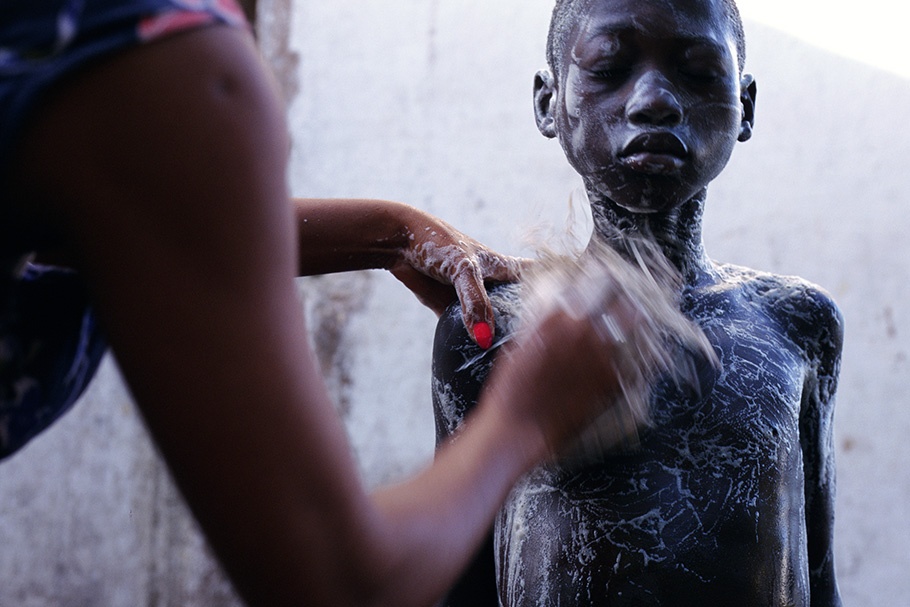 Before taking him for medical treatment, an aid worker bathes Tamba, who was found sleeping on a rooftop with other homeless boys.
Served: Liberian Civil War, NPFL faction (National Patriotic Front of Liberia).
Monrovia, Liberia.
February, 1996. 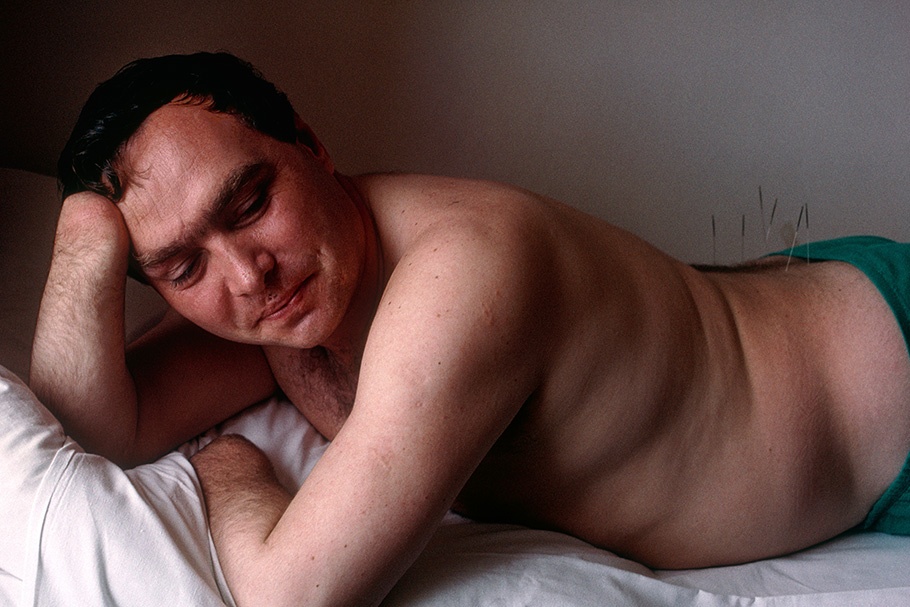 Oleg on the acupuncture table. Once a year war veterans are invited to the sanatorium for rest and therapeutic treatment.
Served: Russian invasion of Afghanistan.
Rus Sanatorium, Moscow region, Russia.
August, 1999. 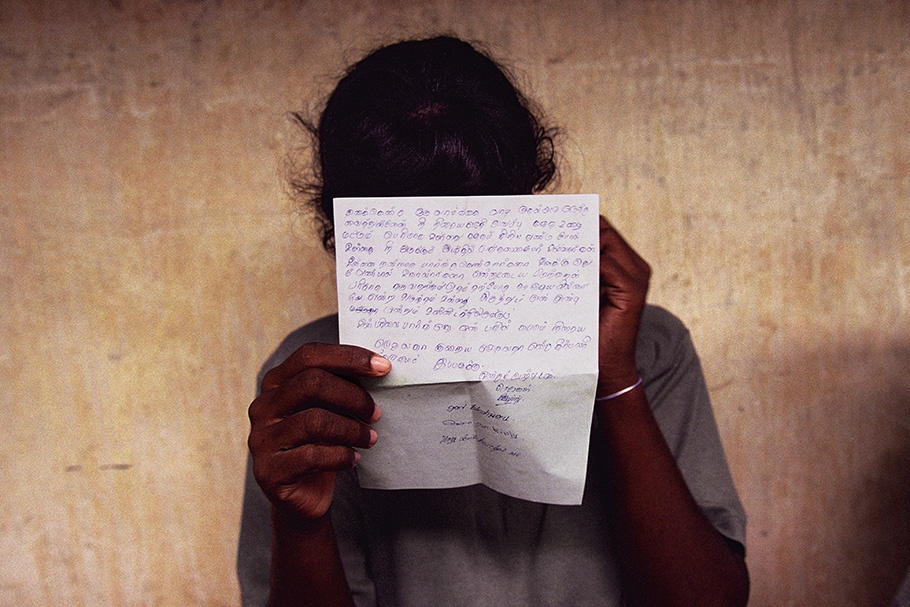 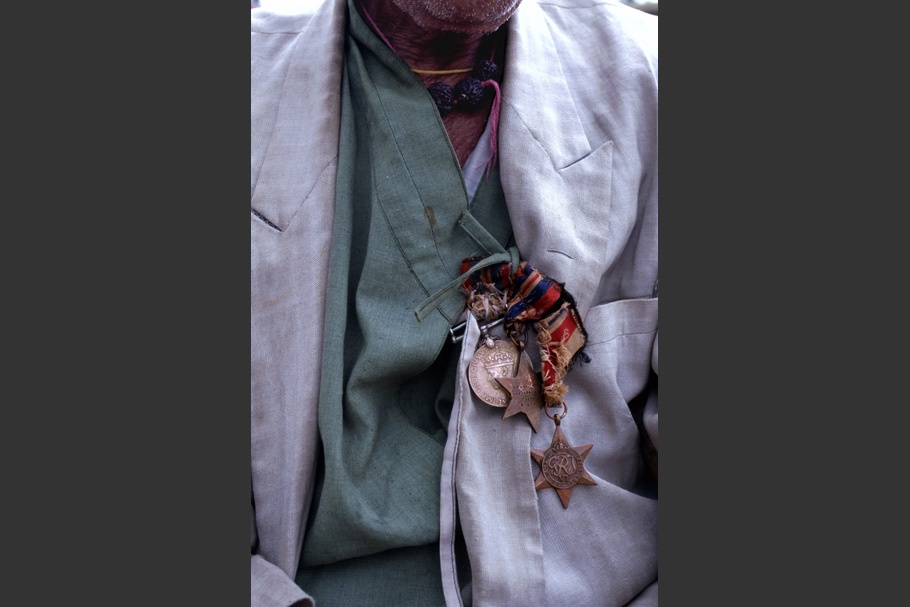 Born in New York in 1957, Lori Grinker began her career in 1980 while a student at Parsons School of Design when her photo-essay about a young boxer was published as a cover story by Inside Sports. During that time she met another young boxer, 13 year-old Mike Tyson, whose life she documented for the following decade.

Her photographs have been featured in a multitude of magazines around the world including Newsweek, Time, Life, The New York Times Magazine, Natural History, Líbération, Stern, GEO, Photo (France), El Pais, American Photo, and in numerous book collections. She has been a member of Contact Press Images since 1988.

Grinker is the recipient of numerous awards and grants including, most recently, one from the Florence and John Schumann Foundation in 2000.

Her book, The Invisible Thread: A Portrait of Jewish American Women was published in 1989 (The Jewish Publication Society). An exhibition of this work toured the United States from 1989-1992.

Since 1989 I have photographed and interviewed veterans who served on the frontlines in conflicts ranging from World War I to Kosovo—men, women, and children who walked the fields and survived, often with damaged bodies and lives. They've emerged with new ideologies, conflicts, questions, and emotions. They have the special knowledge of the killer, the hero, the defeated, and the dead. In the West, especially, where most of those of combat age have gleaned experience of war only from Hollywood movies, these stories of veterans from around the world offer a needed counterpoint to naive and romanticized images.

In the United States, the Vietnam War inspired a great anti-war movement that led many veterans to question their personal ethics. If there is one thing this project reveals, it is that all wars have a profoundly similar effect on their participants. It is not the "politics" of a particular war that concerns this work. Rather, it is to illuminate our culture of warring measured in its human toll.

After War had its origins in a trip I made in 1986 to Israel and the Occupied Territories. I intended to make a photo-essay about Arab-Jewish cooperation. Sadly, it was the eve of the first Intifada and I did not encounter many instances of cooperation between Arabs and Jews. I did meet some Israeli veterans, though, and began a new photo-essay about their life after war, rehabilitation, family relationships, and their understanding and views of the conflicts in their country. As an American, it was perhaps natural that in their experiences I heard echoes of Vietnam. The experience of the Israeli veterans, in terms of the support they encountered when they returned home, both from the government and the public, was radically different. Yet, the Israeli veteran's alienation, nightmares, pain, and regret seemed strikingly similar to the experiences of the Vietnam veterans in the United States. It was this shared experience, despite the apparent differences, that gave rise to this project.

In 1989, with support from Life magazine, I traveled to Vietnam and Cambodia to interview ex-combatants from different sides of the region's conflicts. Thus began a decade of journeying—from Eritrea to El Salvador, from Pakistan to Russia—seeking out other veterans' stories. I wanted to capture images of "the wars" after the wars are over.

Just after September 11, 2001, I went to Canada to interview two World War I veterans (101 and 103 years old). The 103 year-old told me that he hoped I hadn't wasted my time coming to see him since he really didn't have much to say. He said he had spent 30-40 years after the war trying to forget about war and that he wasn't going to dig up that part of his life now. Then he asked me if I had been in New York on 9/11, if I had been to ground zero, and I told him I had. "Well," he said, "now you know what war is…"

Perhaps the reason I pursued this particular subject for so many years is that I believed I would never see war in my country and felt that in order to have a true understanding of twentieth century history, and much of the world today, I would need to better understand who fights our wars and why.  Sadly, in the wake of the September 11 attacks on the World Trade Center this knowledge has never seemed more pertinent.

Governments change, enemies become allies, and the wars are relegated to history books. This work speaks for those who cannot forget. Through the polyphony of testimonies and images I hope to encourage viewers to reflect upon the complex social, economic, and political conditions behind these conflicts.