Beyond Borders: Roma Across Europe 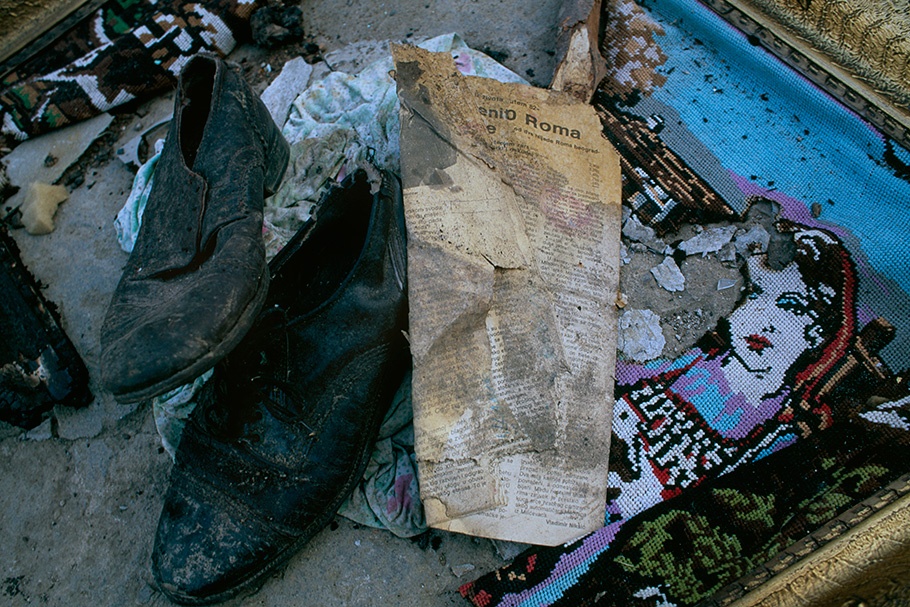 Burnt remains of Romani homes in the Park District, Pristina. After the war, Albanian Kosovars returned to Kosovo under the protection of the United Nations and accused the Roma of serving as accomplices to the Serbs. Thousands of Roma were forced into permanent exile in neighboring countries after their districts were razed. 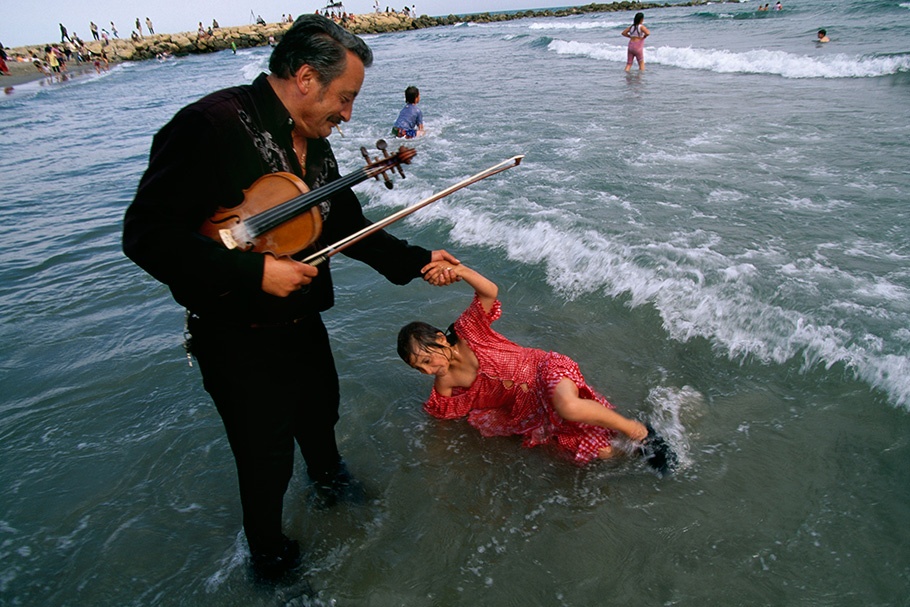 A Manouche musician holds his daughter's hand as she bathes in the Mediterranean Sea during the annual pilgrimage of Roma to the southern French town of Saintes-Maries de la Mer. Every year, Roma gather to celebrate their patron Saint Sara, also known as Sara-la-Kâli, or Sara the Black. Roma honor Saint Sara's return to the shores of the Mediterranean by carrying the reliquary of her remains into the waters of the sea. 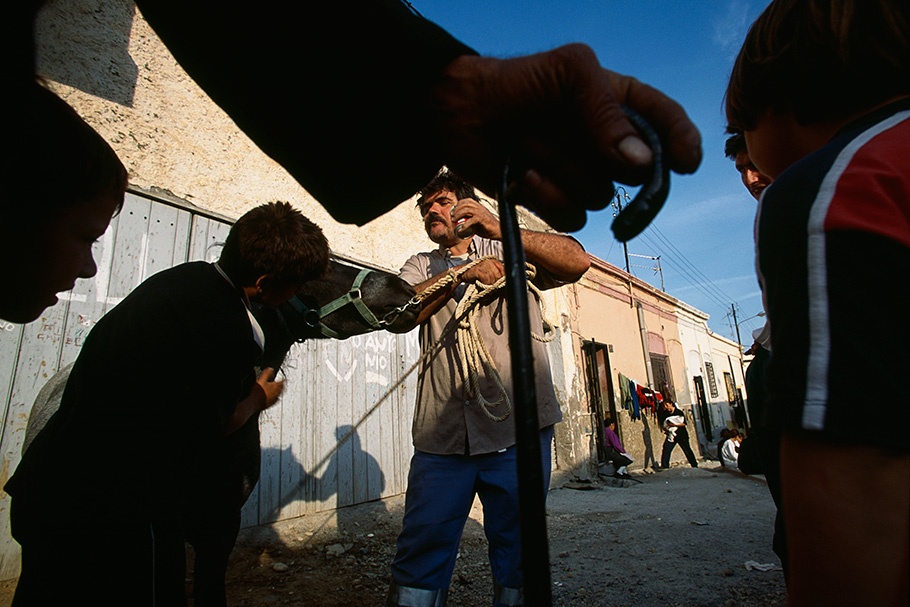 A Spanish Gitano, whose pony drinks beer, entertains local Roma as evening draws near in the barrio of Pescadería. 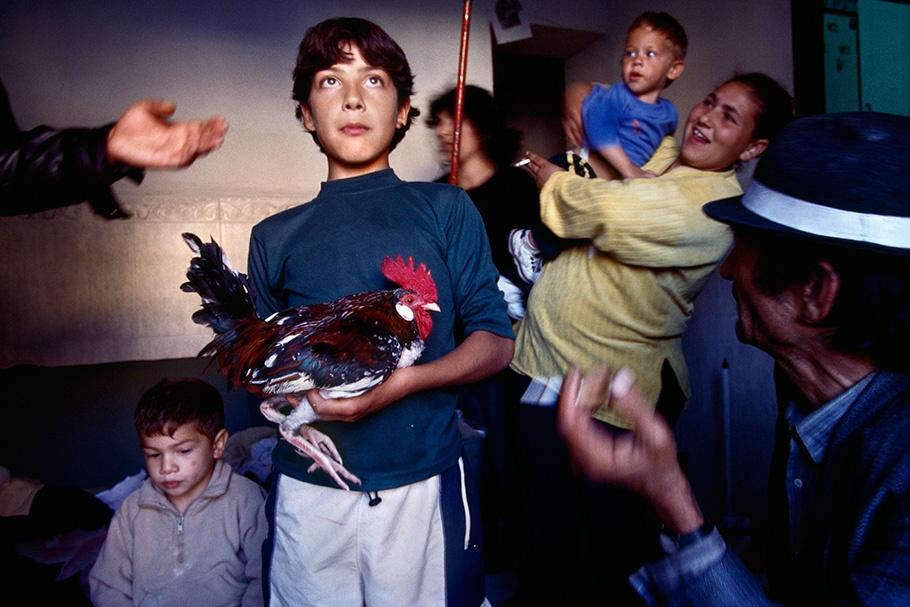 A family of Spanish Gitanos pose with a rooster at their home in the drug-ridden barrio of Pescadería. While some men work on the fishing boats, many are drug addicts and dealers. Children especially are harmed by growing up in this difficult and violent environment. 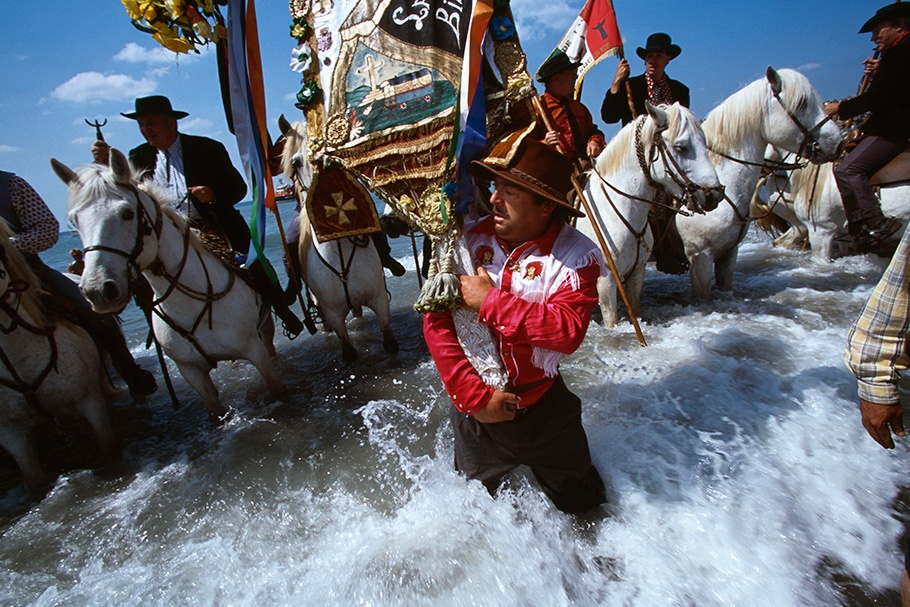 Lafleur, a Manouche Roma, carries the Romani standard into the surf. He is flanked by guardians on horseback during a ceremony honoring the Romani patron Saint Sara during the annual pilgrimage to Saintes-Maries de la Mer. 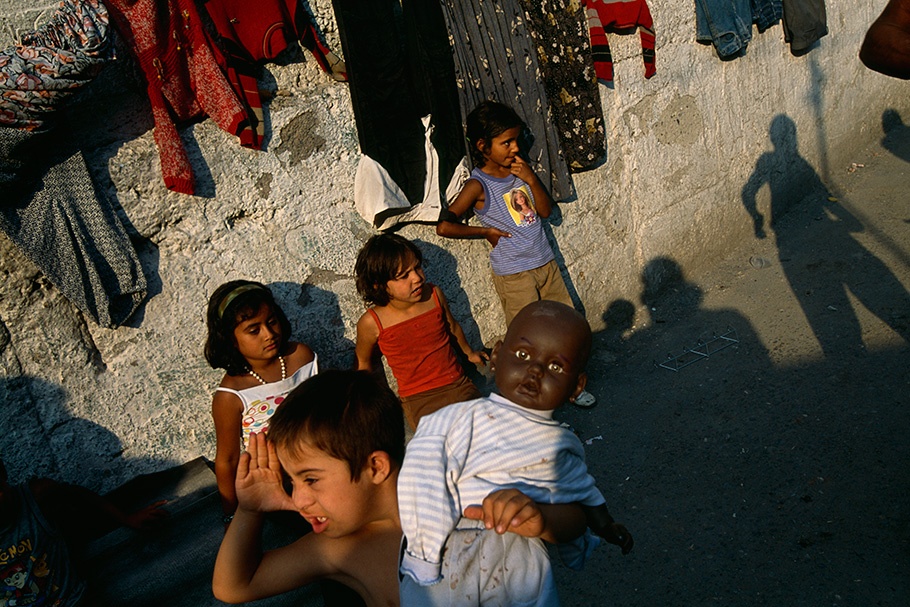 A boy with Down's syndrome plays with a doll in a Romani district in Kagithane, Istanbul. Mentally and physically disabled Roma are well looked after by their families and communities. 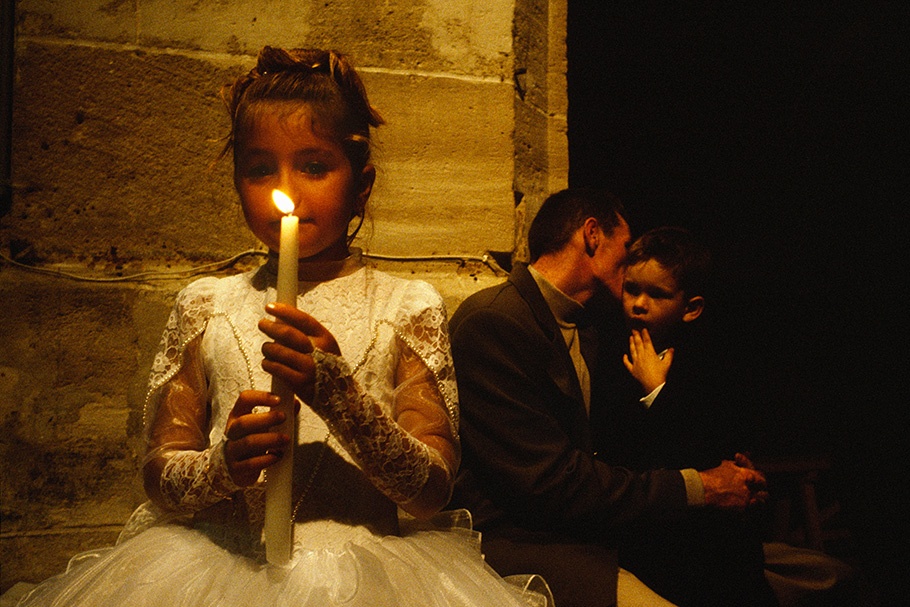 A Catholic Manouche girl prepares for her christening in Beauvais, north of Paris. Religion is an important aspect of Romani culture. Across western Europe, Roma are traditionally Catholic and Protestant; in eastern Europe, Roma are traditionally Orthodox and Muslim. In the face of heavy recruitment by evangelist "born again" Christians, the numbers of Catholic and Protestant Roma are dwindling. 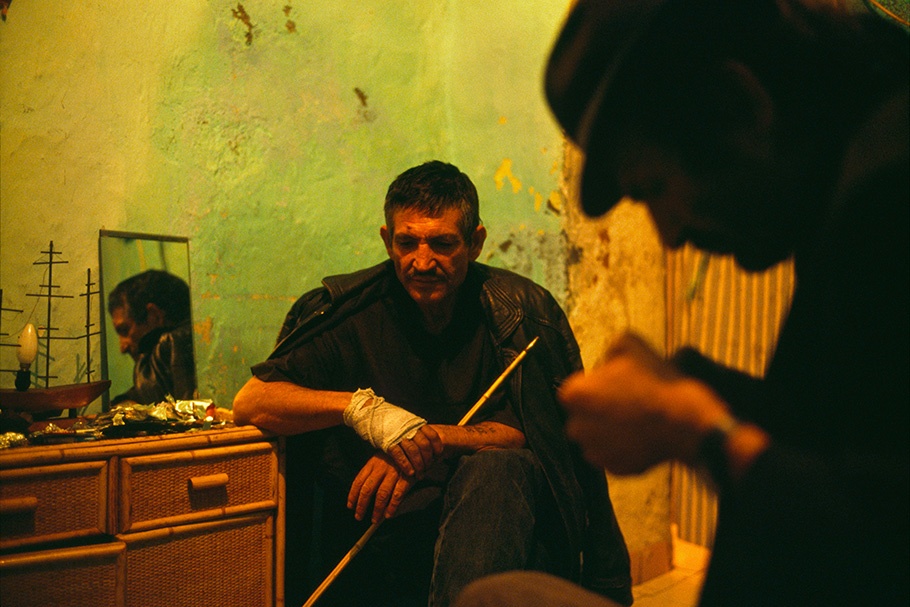 Elderly Spanish Gitanos lighting up a bocadillo (Spanish slang for a small amount of crack cocaine) in a back room in the barrio of Pescadería. 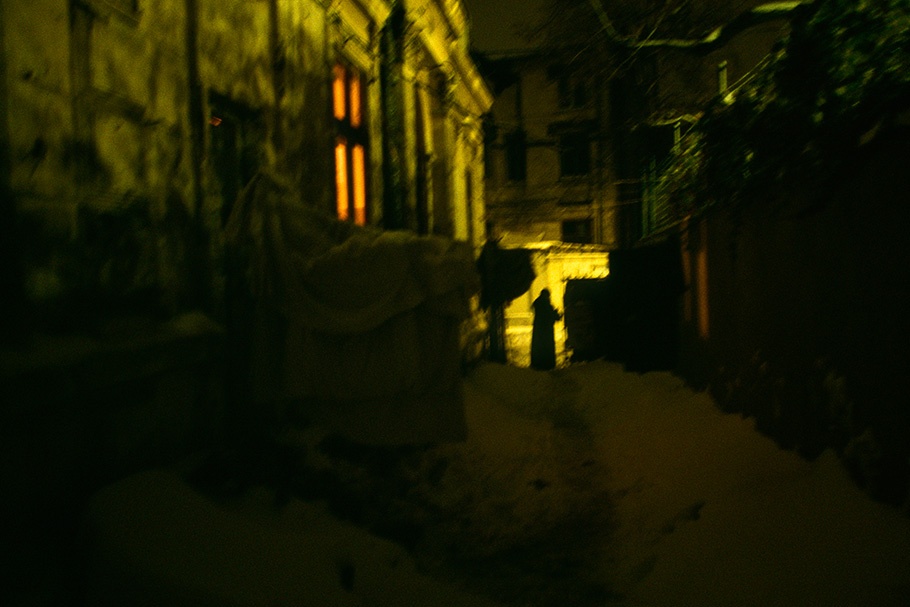 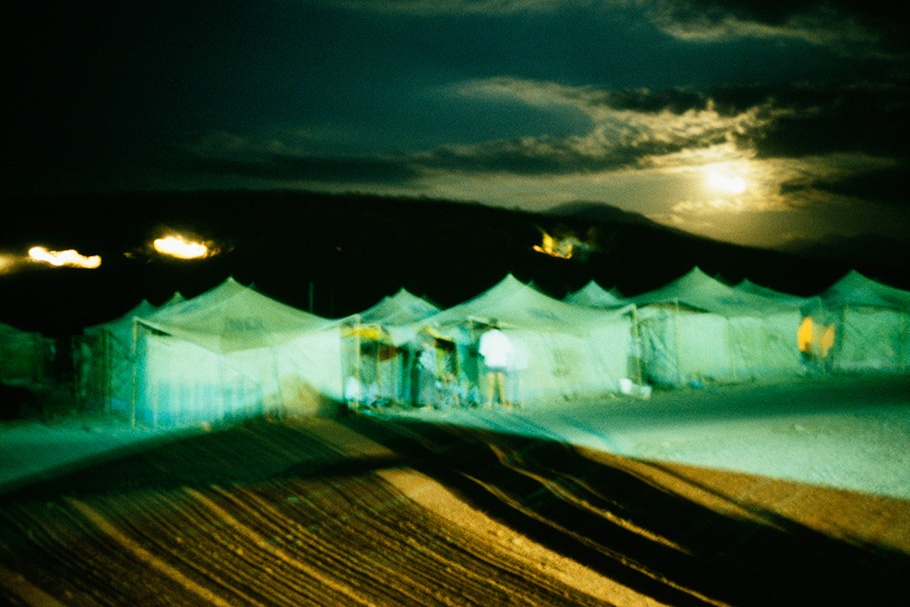 UNHCR (United Nations High Commissioner for Refugees) Konik refugee camp, outside Podgorica. Here, Romani refugees from Kosovo have come to live permanently after the war. The world has taken little interest in them as the last group of refugees that fled the Balkans. All but forgotten, they receive minimal humanitarian aid and are unable to return home. 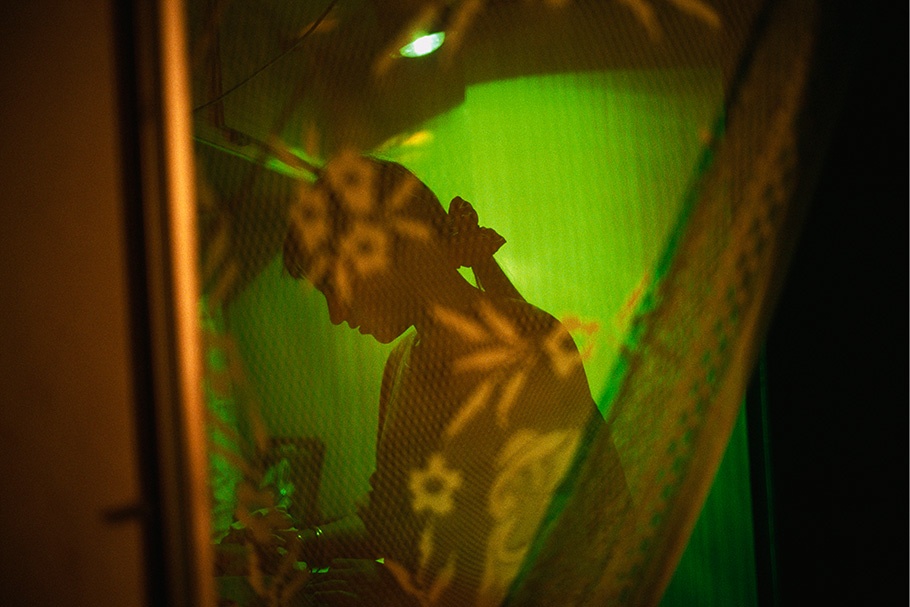 A Romani Czech refugee in the makeshift kitchen of her squatter home in an industrial waste site in Villeurbanne, northeast of Lyon. Thousands of Roma who are economic refugees from eastern Europe live in marginalized and impoverished communities on the periphery of western European cities. For most Roma, it is illegal to work, so they are forced to beg, play music, or find other ways to survive. 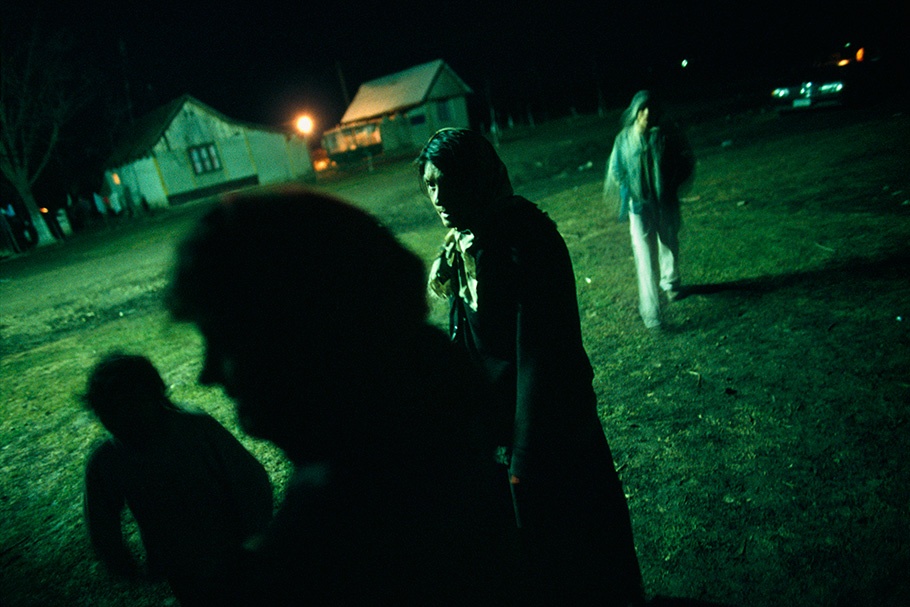 This Romani family prefers to stay outside in the freezing cold rather than enter their damp home, which consists of one bed and a wood-burning stove. Their children are huddled under covers suffering from colds, and their days are spent looking for work and scavenging food and firewood to keep the house warm at night. 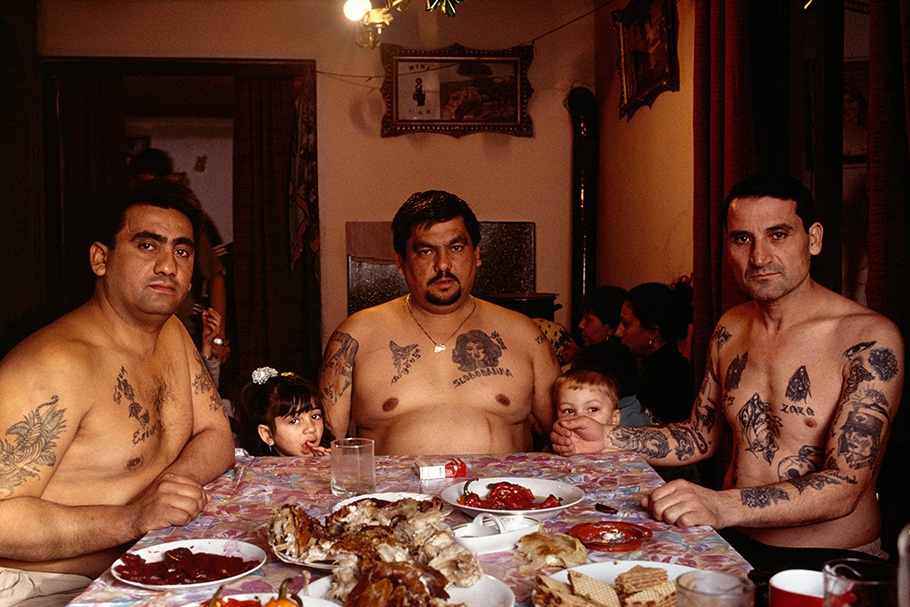 David, along with his brother and brother-in-law, sit down to the Orthodox Christmas morning meal at his home in Belgrade. Orthodox Christmas is a Serbian tradition, but his family is both Muslim and Orthodox. At the same table, Muslim family members eat chicken while Orthodox family members eat pork that has been fattened throughout the year. Christmas is one time when everyone knows they will be well fed as a good omen for the coming year. 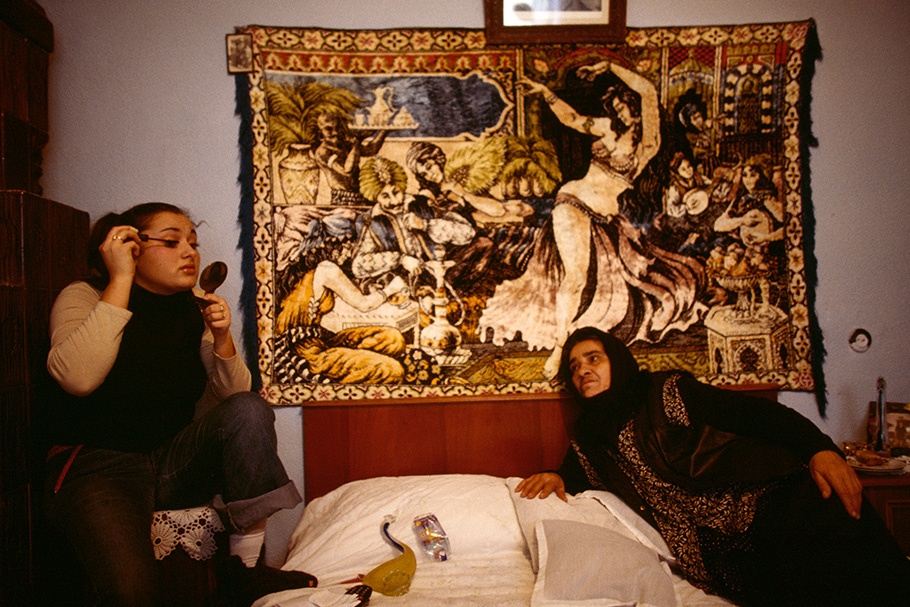 Watched by her great aunt, Musulina does her make-up as she prepares to go out. It is Christmas Eve, and she and her cousins will go caroling around the neighborhood. 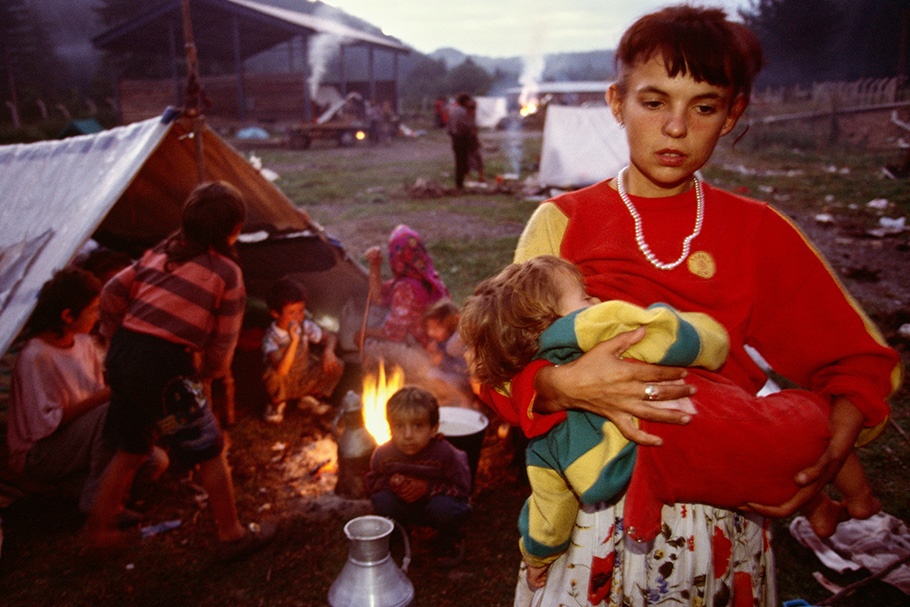 Romani refugees, fleeing Pristina and Pec, arrive at the Kosovar-Montenegro border at Birazne. They are on a natural frontier high in the mountains, and the weather is already beginning to get cold at night. Before winter sets in, they will need to find shelter on lower ground, such as the Konik refugee camp. 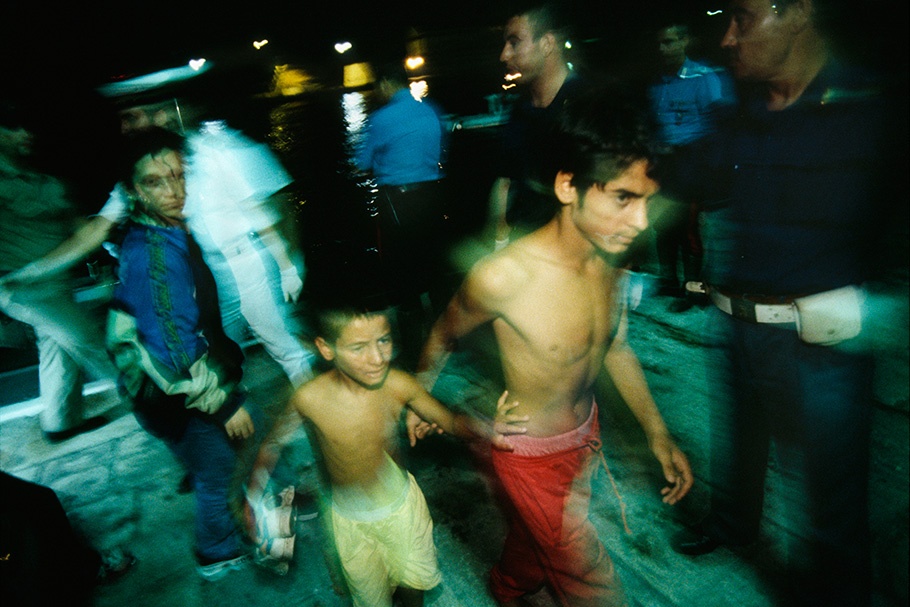 Romani children are escorted off Mafia-run boats and onto the quayside at Brindisi by Italian military personnel and customs officials. Hundreds of Roma, who had paid $1,000 per ticket, drowned at sea in flat-bottom river boats run by the Balkan Mafia. These are the luckier ones who survived the desperate 40-hour journey across the Adriatic Sea from Montenegro. In a few days, they will be processed by the Red Cross, given papers, and allowed to continue their journey. 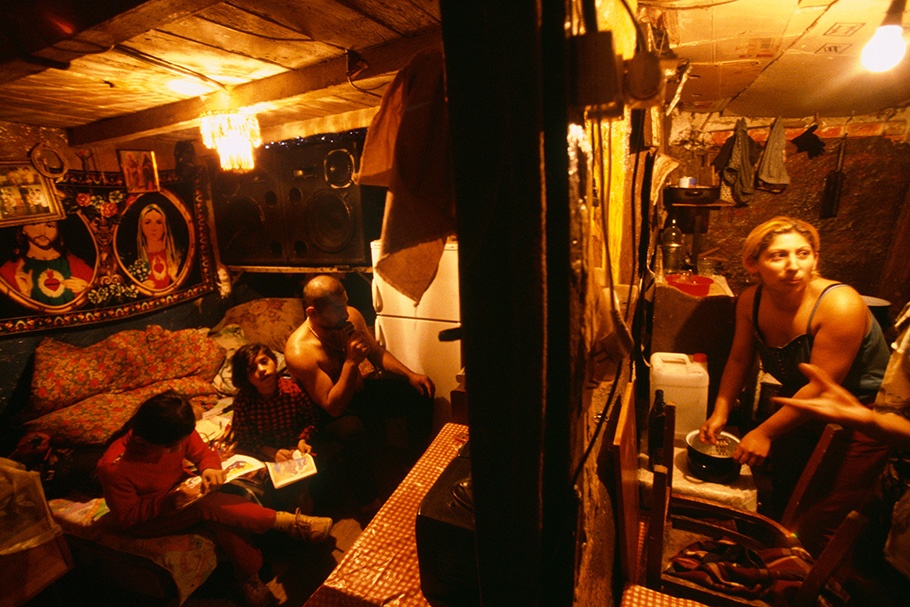 A Romani family that earns a living through a karaoke discotheque. They live in a squatter home built on a small river island, where shelters have been swept away by flood waters more than once before. The residents have fled and then returned to rebuild their village after heavy rains. They have nowhere else to live. 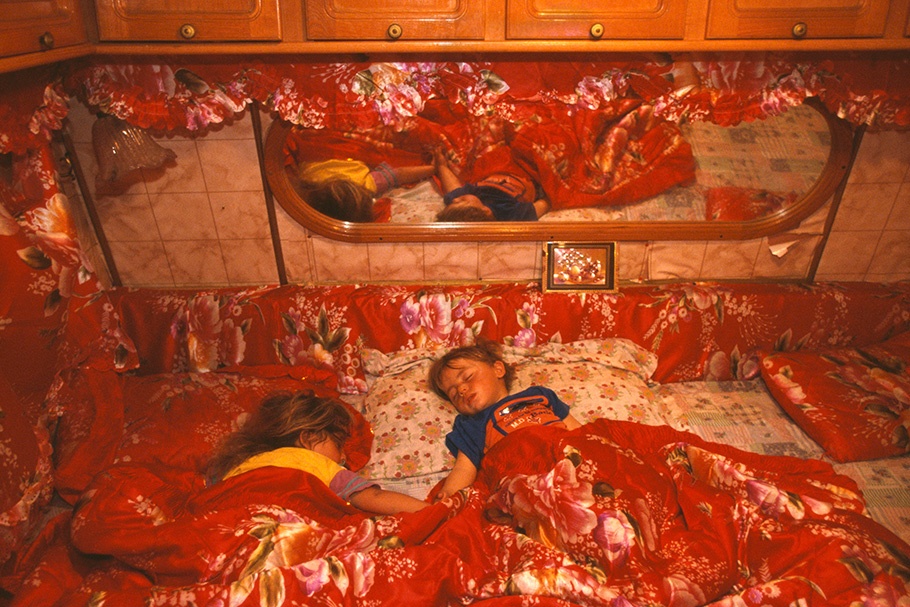 Croat Romani siblings sleep in a caravan on the eve of St. George's Day at the Vicolo Savini refugee camp. They and their family will wake up before dawn, wash and bathe in the nearby river, and celebrate the holiday by dancing and feasting on roasted lamb throughout the day. 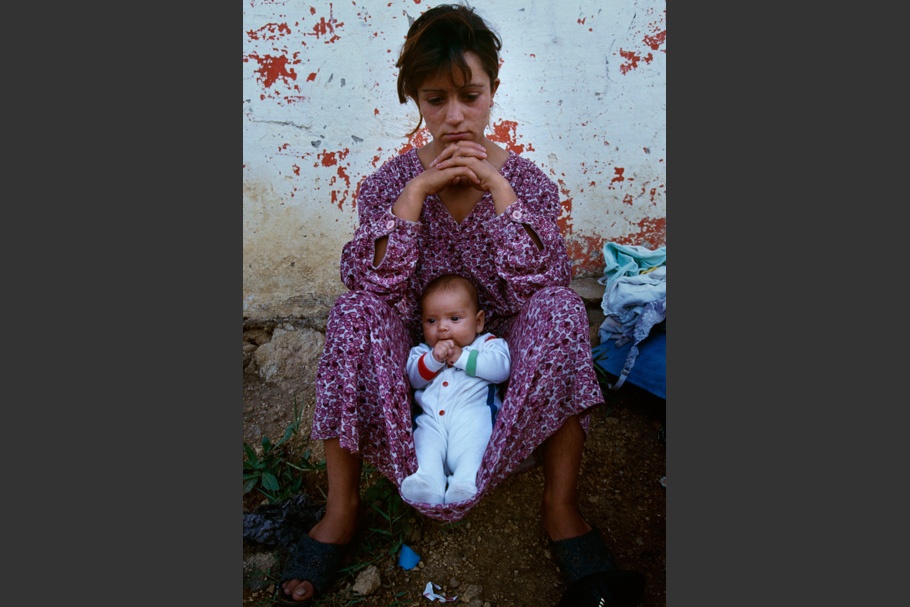 Teenage girl with her daughter. Her family are Romani Kosovar refugees too poor to afford the Mafia-run boats that illegally transport Romani refugees to western Europe so they must remain in the Balkans. They live in the foothills near Barr and scavenge for food in the markets and beg on the streets in order to survive. 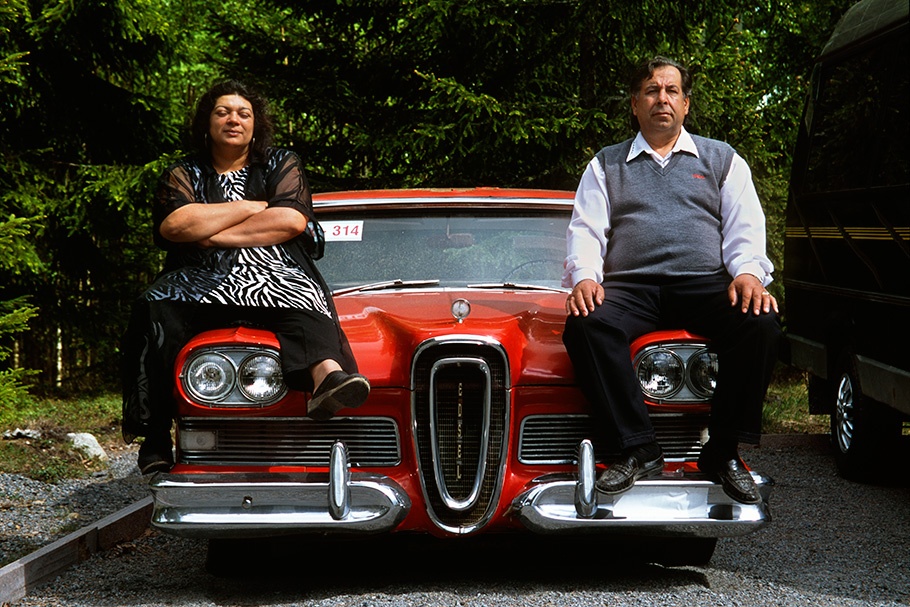 Kai and Katinka Palm, Romani musicians, composers, and car dealers at their home.

Nigel Dickinson is a Paris-based documentary photographer focusing on the environment, human rights, culture, and identity. After graduating from Sheffield University in 1982, he began a series on public protest in England, and later spent several months photographing apartheid in South Africa.

His work on the Birmingham miner’s strike in the mid-1980s was published and toured by the Arts Council of Great Britain. He later moved to South East Asia to document the devastation wrought by logging in indigenous communities, which earned him a bronze award from the United Nations Environment Programme’s photography competition.

In the early 1990s, he began documenting the Roma festival at Saintes Maries de la Mer in France. The resulting book, Sara: Le Pelerinage des Gitans, was published in 2003. His work also took him to the Balkans, where he continued his work on Roma, as well as other displaced peoples, and to Central and South America, where he photographed street children, the aftermath of the Guatemalan civil war, the Yanomami Indians in the Amazon, and climate change. In 1997, he was awarded a World Press prize for his work on mad cow disease.

His photographs are widely published in outlets including Le Figaro, Stern, GEO, D Republicca, Marie Claire, Mare, and La Vanguardia. In 2000, for his work on Roma, He was a runner-up for the Eugene Smith Award. Parts of this work have also been exhibited by the European Union and shown at Visa Pour L’image. He continues his project on Roma across the world, most recently traveling to the Americas and working in Spain, where he is shooting a documentary film. He is represented by Polaris.

This set of photographs presents Roma as a people whose story is not written within one country’s borders. It is about a culture, a way of life across a continent. The pictures portray the Roma’s diaspora throughout Europe—a story of migration, persecution, and suffering. They are the object of racism, refugees of war and, in too many places, live in abject poverty.

The most recent mass migration of Roma occurred during the violent disintegration of Yugoslavia, as thousands of Roma—caught between frontlines in Bosnia or ethnically cleansed from Kosovo—fled to Western Europe and beyond. Others have come from elsewhere in post-communist Europe to escape racism and poverty, only to end up living in squatter settlements on the periphery of rich Western cities. Exodus is nothing new to a people who survived the Holocaust, centuries of forced displacement, and slavery.

Today, with tension over immigration and porous borders on the rise, Roma receive even harsher treatment, and hostility toward “Gypsies” is in full force. The nine million Roma who live throughout Europe are still seen as eternal outsiders, and are often shunned by gadje, the Romani term for non-Roma. The racism that had been denied overt expression during communist rule is now allowed to flourish, and Roma face discrimination at every turn, from education to employment.

Most Roma live in insular communities; they are proud, fiercely private, and distrustful of outsiders. They define their own cultural boundaries, they are extravagant and ostentatious, deeply religious, and keep strict codes of social etiquette. While Roma relate to their national origin, they identify most closely with the idea of family, tradition, and of a people.

The inaugural session, in 2005, of the European Roma and Travellers Forum at the Council of Europe in Strasbourg represented for many Roma the long-overdue assertion of their identity as a people. The hope is that Europe will take notice of the self-determination of its largest and most persecuted minority, and that their call for empowerment will extend to the three million Roma who live on the other side of the Atlantic.

Strong emotional bonds draw me back to visit and live with Roma year after year. I’ve worked to expose the systems that keep them down, and explain the circumstances of their departure. While each image tells a story, together, the photographs are a testimony to European Romani life experience, their vibrant culture, and identity.