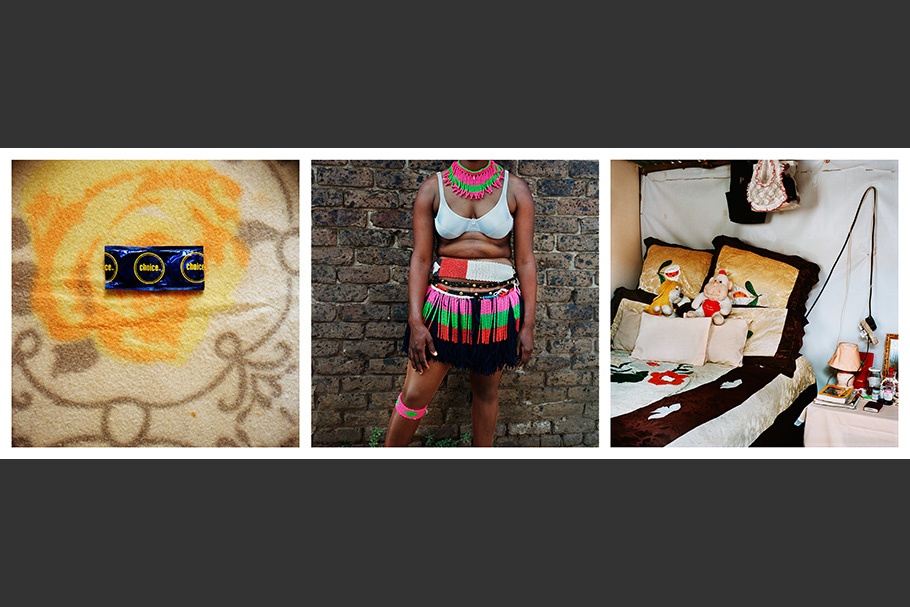 I was living with my boyfriend since I was 24. I'm a singer and I love to sing, but I found it very difficult to tell him that I am going to sing. I would have a lot of time to tell him because I would hear in advance when I am supposed to perform. But the day would come, and I still hadn't told him because I knew that it was going to start a fight.

One day, I said we must use a condom when we sleep together. He said, why am I saying that. It means that I have slept with someone else. That's when I realized that you never know what a man wants. I wanted us to both be safe. But still there was no trust, and he would always put the blame on me.

I found out that he had an affair with someone else.

He used to beat me in front of our child. At that time, he was three years old. He was crying.

I realize that I'll never stay with a man in my whole life again. I think that maybe they are all the same.

I wasted a lot of time because I stayed with him for six years. When I think about that time it makes me feel sad because I won't get those years back. He stopped me from going to school. 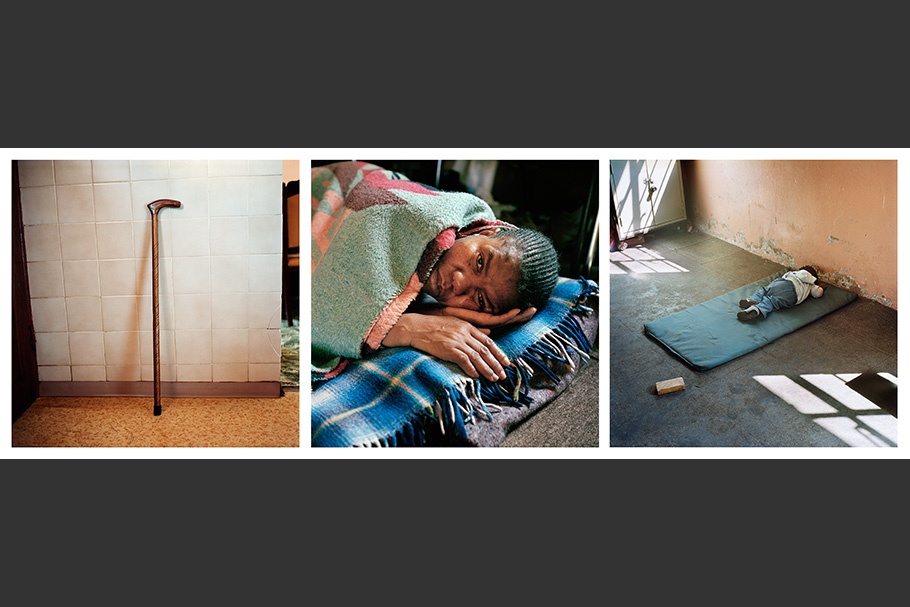 I have four children. I was married in 1974, and I stayed with my husband for 10 years. He used to drink alcohol. When he was drunk he always liked to fight. If I was to ask what was wrong, he just wouldn't listen to me.

I left him with the children and came to Johannesburg. I was looking for work. I don't have a place to stay, so I stay here on the floor at the daycare center, which is also the church.

This man used to beat me up until I went to the hospital. He beat me in such a way that it was just so bad. He hit me on my spine. Since then I can't carry heavy things and do hard work. He used to hit me every weekend with the walking stick. When I see a walking stick I get very scared because I used to live with the fear that he made me feel with his walking stick. The kids would always cry.

I realized that I am going to die if I stayed, so I ran away.

I don't know where he lives or what he does right now. The house that we had built together, he burnt it. Until now, even when I go home to go and see the kids, I am still not free because I know he could come in any time.

I can't talk any more, it's just too much, there is too much that he's done. Most of it just breaks my heart. 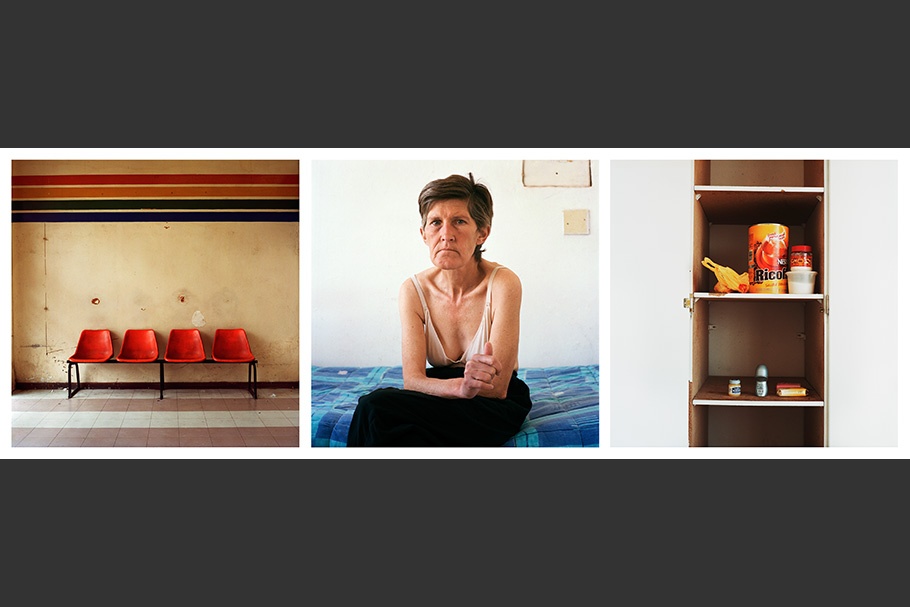 Unfortunately, last Wednesday night when I got home, if one can call it home, I was locked out by my husband. We've been married seven years, although we've been together eleven years. I've had this problem since the start, so it's been eleven years of nonsense. My husband is an extremely abusive man. He's aggressive. I think I've suffered every form of abuse from him with the exception of sexual abuse. Well, I mean it's strangling, it's kicking, it's punching, he burns me with cigarettes, this sort of business.

After the abuse he becomes very, very quiet.

Well, I mean it's nerve racking. You don't know from moment to moment. You don't know what is going to happen next. He's threatened to kill me more times than I care to remember.

I tried to get out of it but always he followed me, begging me to come back. This guy has had money at times, but he refuses to provide a home. He is a mechanic, and we are presently living in the workshop. I'm not there during the day. I sat in the Laundromat day in and day out for four months. I am actually an institution in this place. At least it was a place of safety.

My confidence, my self-esteem, everything about me in comparison to ten years ago...I'm a shadow of my former self, if I may put it that way. 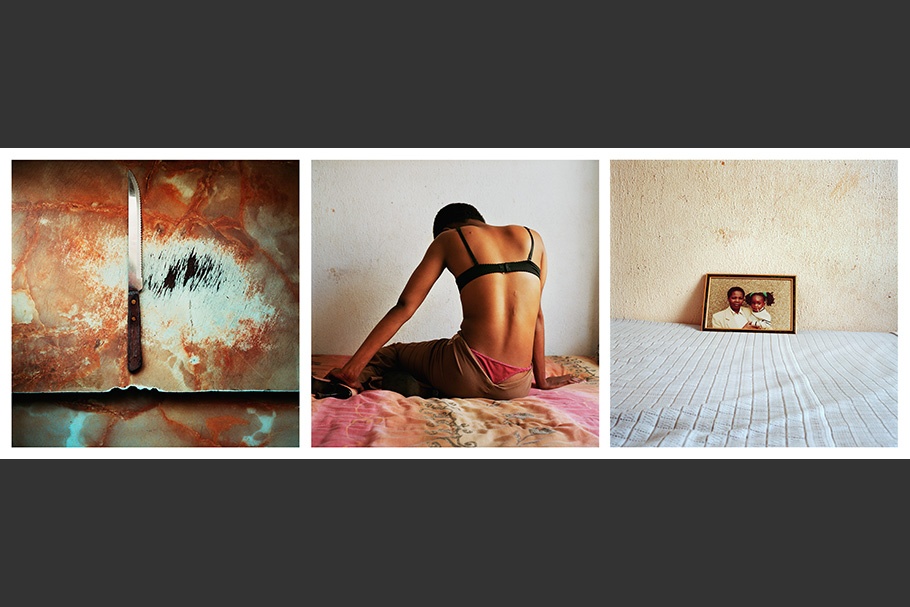 You know, our African culture, they think women are to be beaten. You can discipline a woman by beating her. So from my husband's background—his parents, his family—they believe in beating your wife.

I was stabbed with a bread knife by my husband. I was stabbed in the back through the kidney. The knife nearly came out in the front, so my one kidney is not functioning properly. After stabbing me he drank poison. He forced me to drink the poison. I was in a coma for three months, and I was pregnant.

You know, women, we forgive. I took him back. He wasn't coming home; he wasn't bringing any money. I was doing everything—paying the rent, looking after the child, doing everything. So he started abusing me again. He even wanted to throw me out of the apartment window, from the second floor.

I have scars all over. I can't say I'm happy. I'm happy I've got myself and my child. But I don't like these scars. When I look at them I get very angry. I could kill him. I wasted five precious years with him. I wasted my womanhood. I could have done something for myself because I have always wanted to go to school.

Sometimes I think I am just ugly. I just think maybe I was stupid. He kept on hitting me, hitting me, and I kept on staying with him for no reason. Sometimes I blame myself for it.

Jodi Bieber is a South African photographer based in London. Her work takes a close look at the social wars within society. Though South Africa is her passion, her work has taken her to many other countries, including the rest of Africa, Iran, Iraq, and Pakistan.

She began her career by covering the period leading up to the first democratic elections in South Africa in 1994. After participating in the World Press Photo master class in 1996, her career expanded to the foreign media. She has also collaborated with several nonprofit organizations.

Bieber has received eight World Press Photo awards, a gold award at the Society of Publications Designers Awards for her work covering the Ebola crisis in Uganda, and a best cover design at the British Media Awards for her project on domestic violence in South Africa.

Her work has been included in many international group exhibitions, and she had her first solo exhibition at Visa Pour L’Image in Perpignon, France, in 2001. Her first book, Between Dogs and Wolves—Growing up with South Africa, which includes highlights from a decade of work in South Africa, was published in 2006.

One out of four women is beaten regularly by her intimate partner.

One woman is killed every six days by her intimate partner.

One woman is raped every 26 seconds.

Amnesty International and Médecins Sans Frontières collaborated with nine photographers in a global project to highlight that violence against women is a universal problem.

My project focuses on South Africa, where the news is filled with horrific accounts of violence, and abuse is discussed and debated on a daily basis.

I worked closely with organizations that shelter and assist women who have been abused. The women I photographed were very courageous. Poverty is rife in South Africa and many women rely on their partners for financial support, making it difficult to walk away. Nonetheless, these women have managed to leave their abusive relationships.

They were also willing to make their stories public. For some, making these portraits was part of the healing process; for others, the stories were an attempt to save other women.

The more these issues are discussed openly, the more women will no longer be willing to tolerate abuse. By leaving, they not only liberate themselves, but make it acceptable and a little easier for other women to escape.

By speaking out about their experiences and sharing their stories, these women have exposed the unacceptable abuse that exists in relationships. I believe that each time this work is exhibited it opens a door through which another victim can walk to safety.

This is not just a South African story.