In the Shadow of Power: Poverty in Washington, D.C. 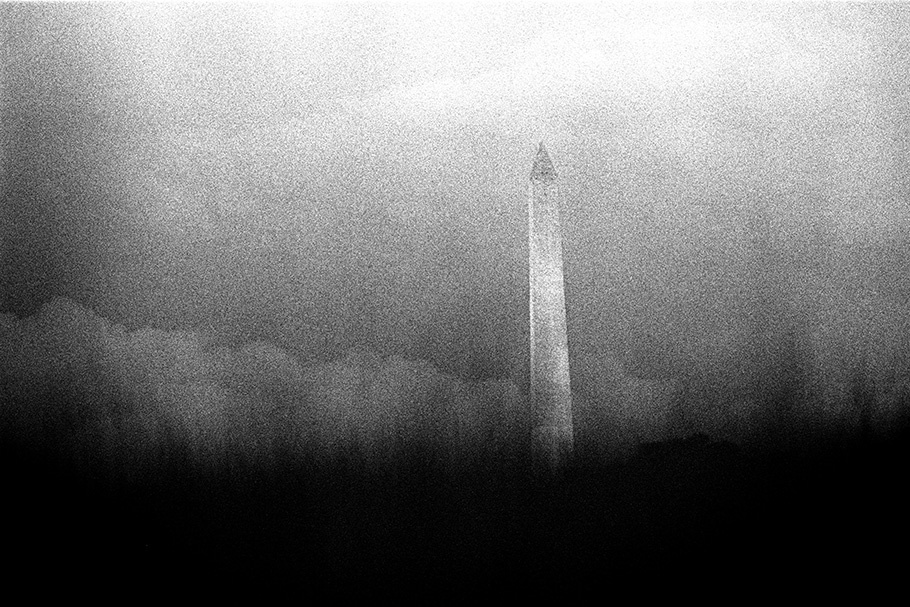 The Washington Monument, the National Mall. 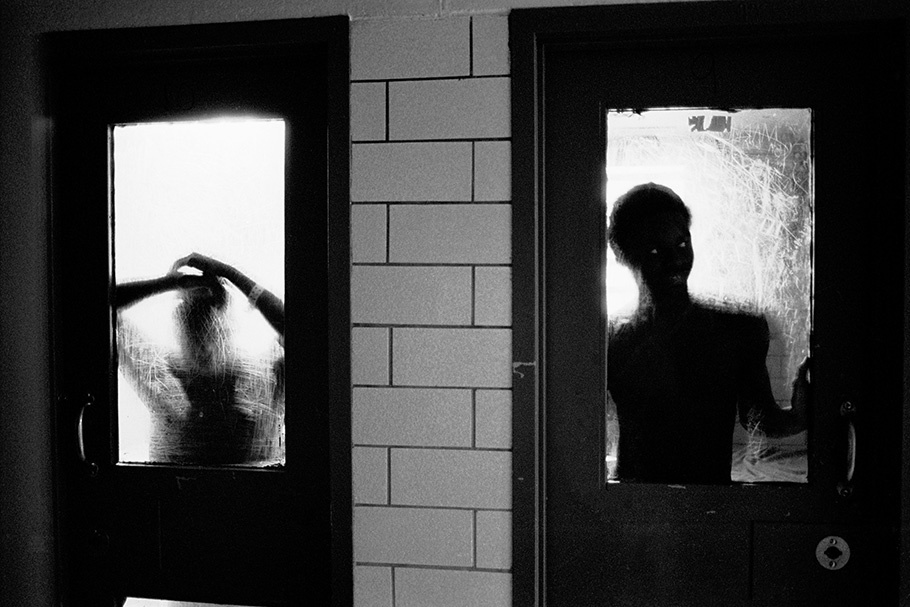 Teenagers in their cells at Oak Hill Youth Center, a juvenile detention center for D.C. youth. On November 28, 2005, an 18-year-old confined in Oak Hill died after a brawl with fellow inmates. The correctional center has a reputation for bad management, poor living conditions, and drug use. 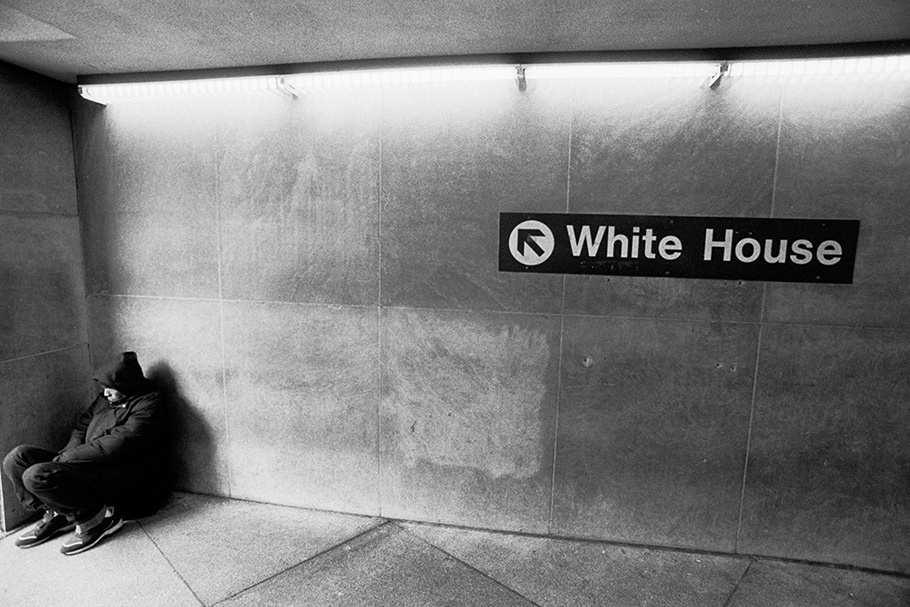 A homeless man protects himself from the wind at the entrance of a Metro station near the White House. 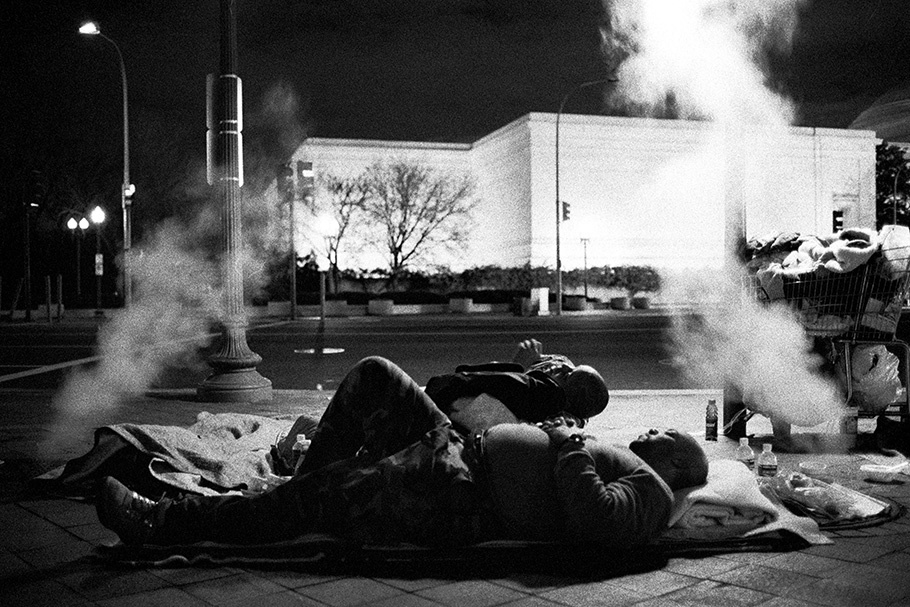 Homeless people sleeping on a Pennsylvania Avenue sidewalk near the National Gallery of Art. They are warmed by the heating vents of large buildings nearby. 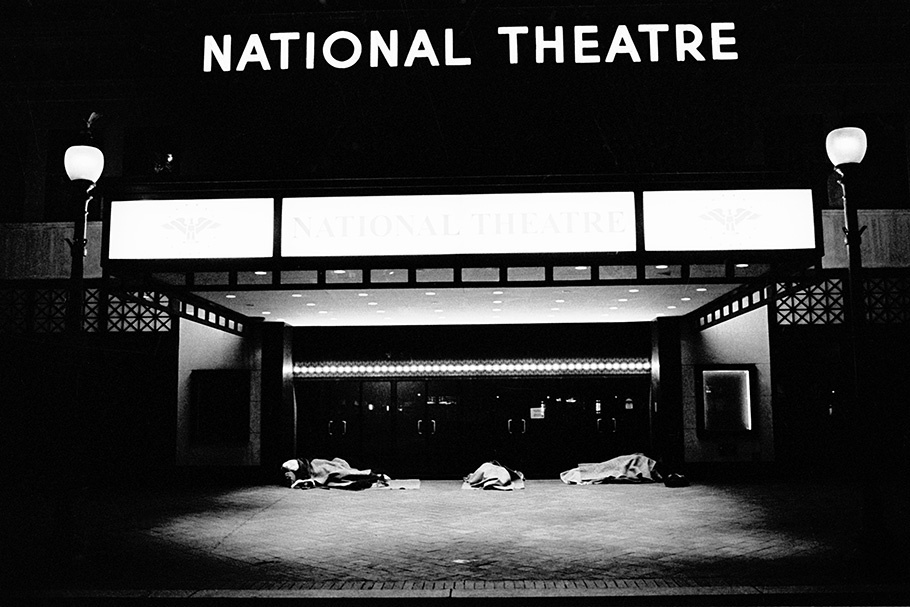 Homeless people sleeping at the National Theatre, a national landmark, located only few blocks away from the White House. 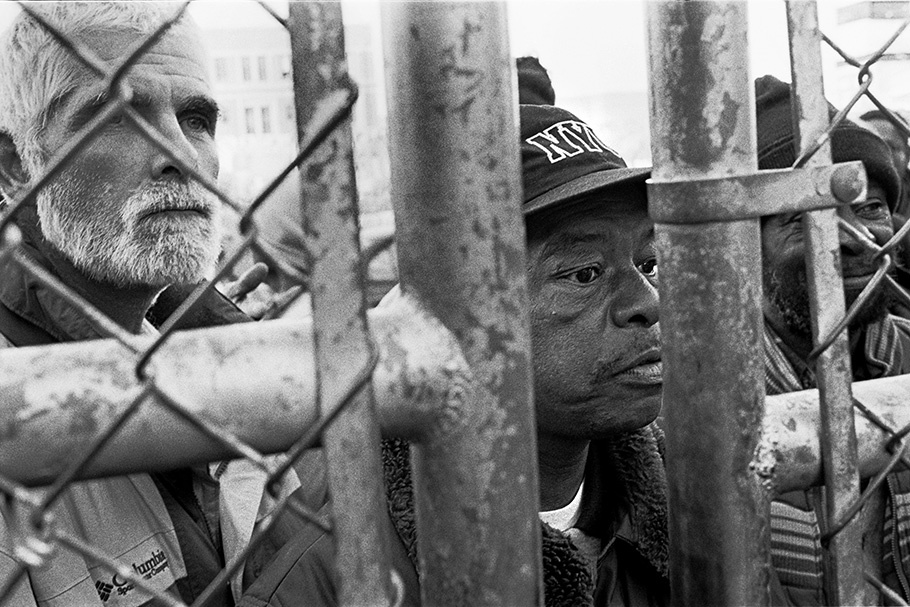 Homeless men enter the night shelter on Irving Street in northwest D.C. Access to this shelter starts at 5 p.m. and men have to leave before 9 a.m. the following day. To be allowed inside, the applicants must undergo a search for drugs and weapons at the door. 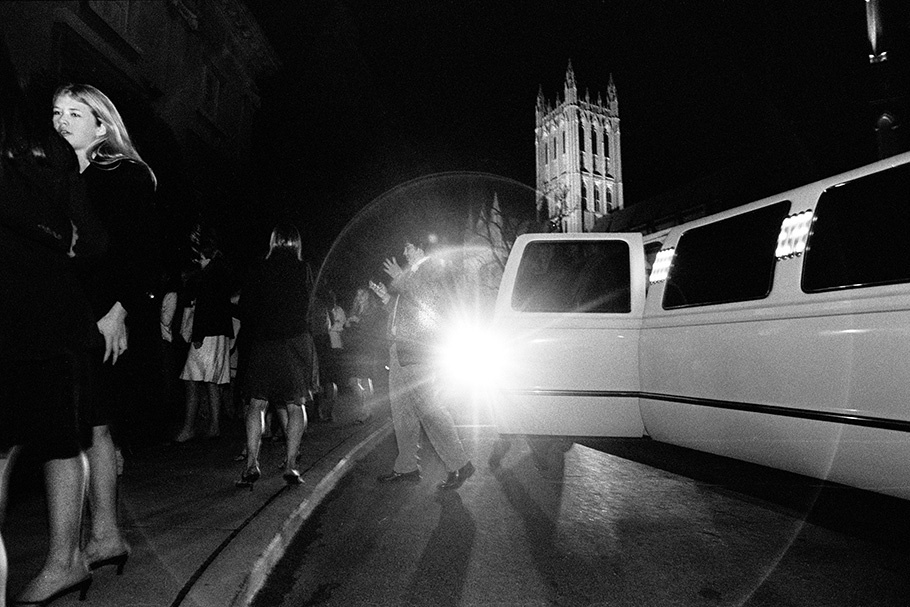 Students from the exclusive National Cathedral School arrive in a limousine to attend the school’s Christmas party. 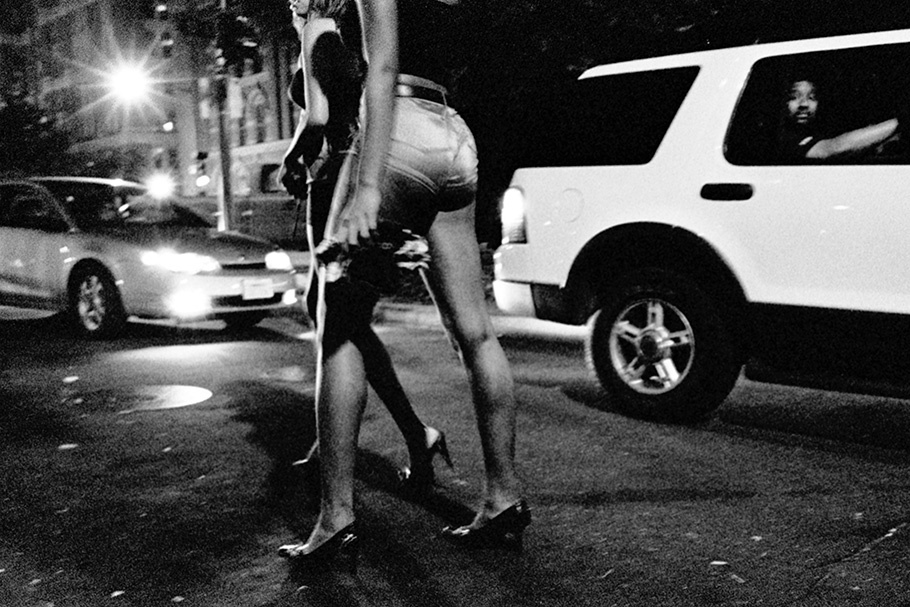 Sex workers on K Street, only a few blocks away from the White House. 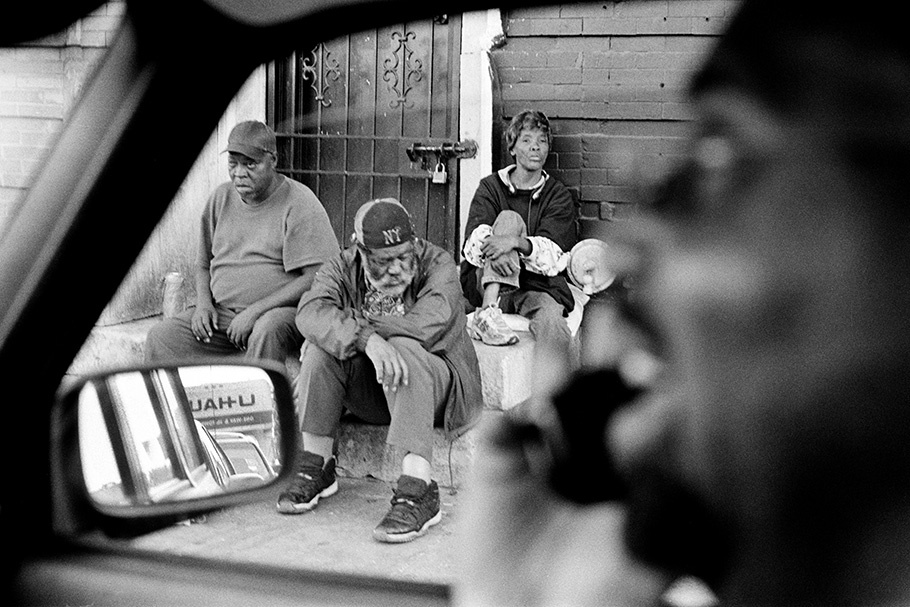 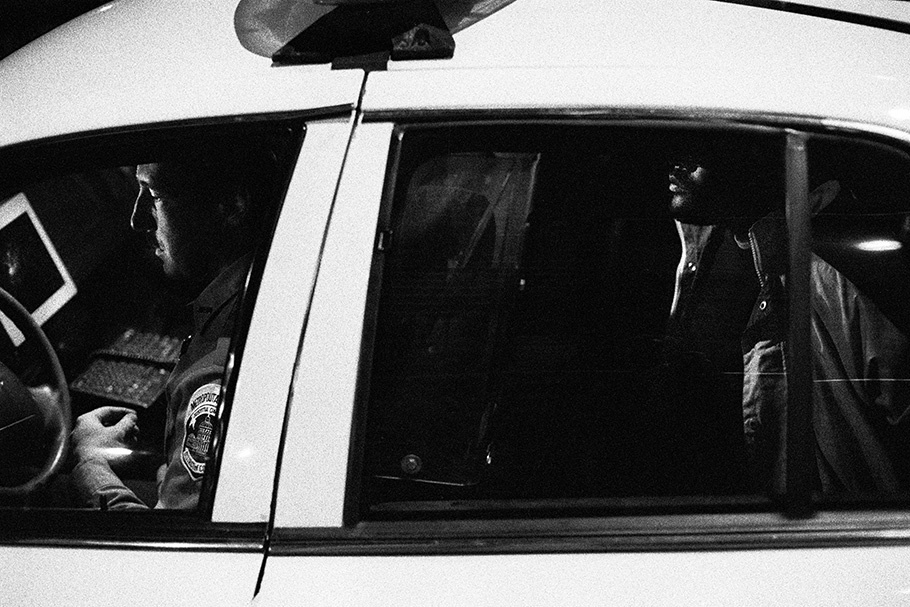 A young man is arrested after allegedly attempting to break into an apartment on Georgia Avenue. 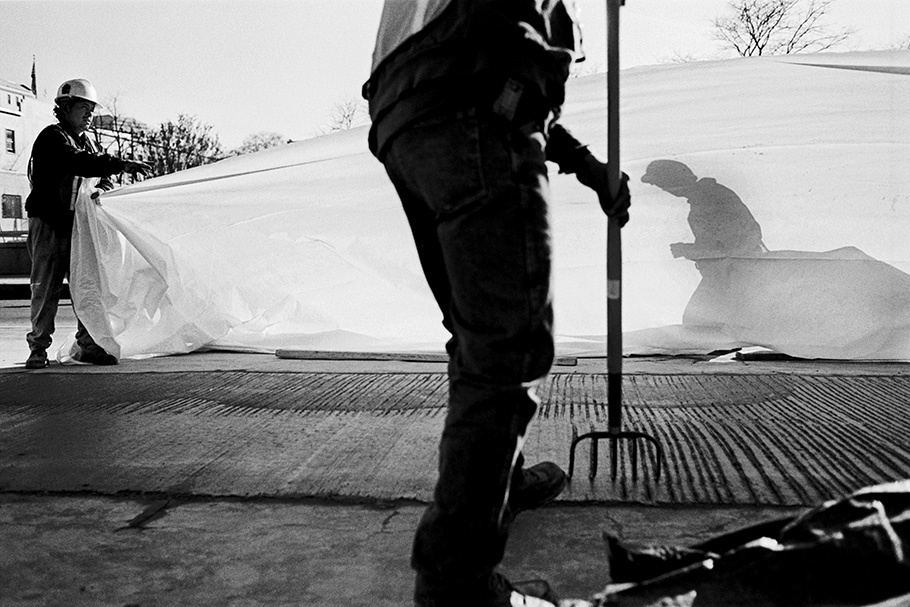 A construction crew works on a street close to the Capitol. Washington, D.C. is experiencing rapid gentrification. 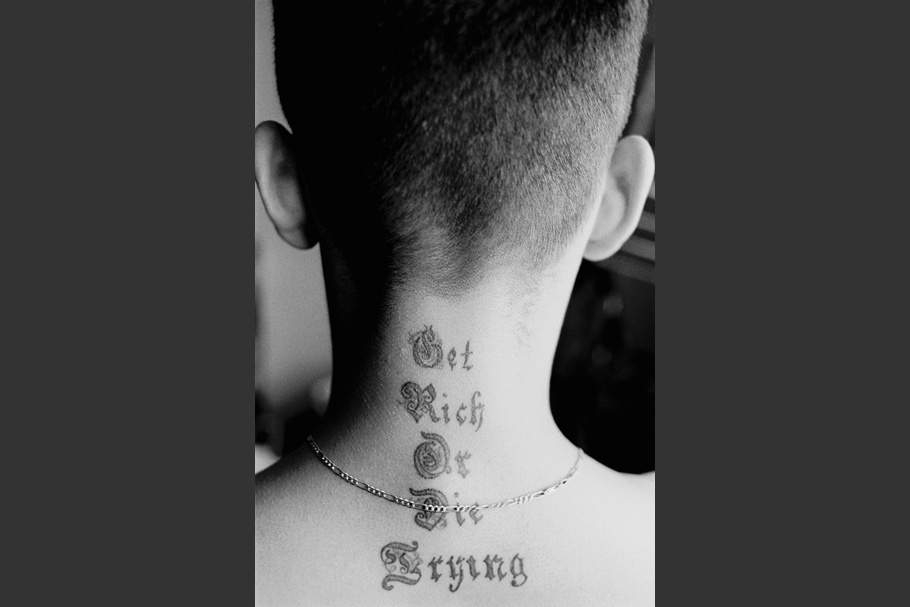 A young gang member on probation shows his new tattoo. 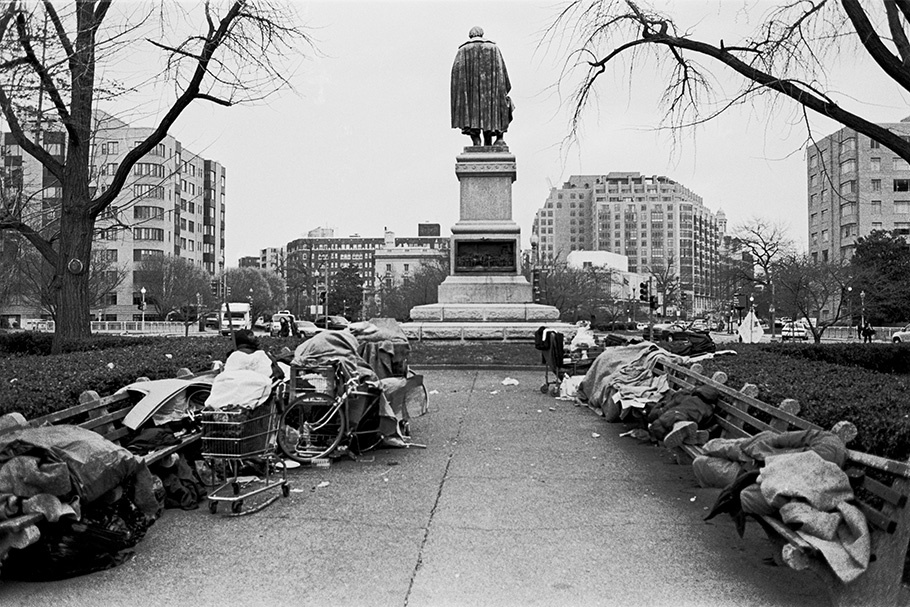 Homeless people at the Daniel Webster Memorial, close to the central and trendy neighborhood of Dupont Circle.

Kike Arnal is a still photographer and videographer based in New York City. Originally from Venezuela, Kike has covered stories in the Americas, Asia, and Europe. His photographs have been featured in the New York Times, Life, and Mother Jones, among other leading publications. He has directed and produced video documentaries, including Yanomami Malaria, a film for Discovery Channel about a malaria epidemic among scattered populations of indigenous people in a remote area of the northern Amazon. Currently, Kike is completing a book of photographs illustrating the social contrasts and complexities of Washington, D.C., and beginning a video documentary about life at a D.C. hospice.

I first came to know Washington, D.C., during an assignment in 2002 to photograph the city’s decaying public library system. The problem, I soon realized, was part of a much larger pattern of urban neglect, and the next year I started an in-depth photographic study of Washington. The poverty I encountered in many of D.C.’s inner-city neighborhoods reminded me of the marginal barrios back in my home country of Venezuela and elsewhere in South America. As an outsider, it was stunning to see such conditions in America’s capital, perhaps the most powerful city in the world. While its monuments and government halls are icons of U.S. supremacy, the homelessness, violence, and poverty that exist in their shadow reveal another America, one of economic inequality and racial disparity.

With a population of roughly 550,000 people, the District of Columbia is a small city by world standards. But it is a city of extremes, of great power and severe deprivation. Washington has the country’s highest rates of teen pregnancy, infant mortality, and HIV infection. Over 20 percent of the city’s residents, and 30 percent of its children, live in poverty.

Washington’s explosive growth during the past few years contrasts starkly with these statistics. With more affluent people flooding the housing market, long-time residents have been forced to move to surrounding communities outside the city, such as Prince George and Montgomery counties in Maryland.  In too many cases, families have wound up on the street with no place else to go. As in most international cities, Washington encompasses a growing gap between the haves and have-nots.

Many Americans and international visitors alike seem to have an incomplete understanding of Washington, a center of global influence that has failed many of its own communities. No doubt the situations I have documented can be found in nearly any major city, but in the seat of power of the richest nation in the world, such images are all the more troubling.