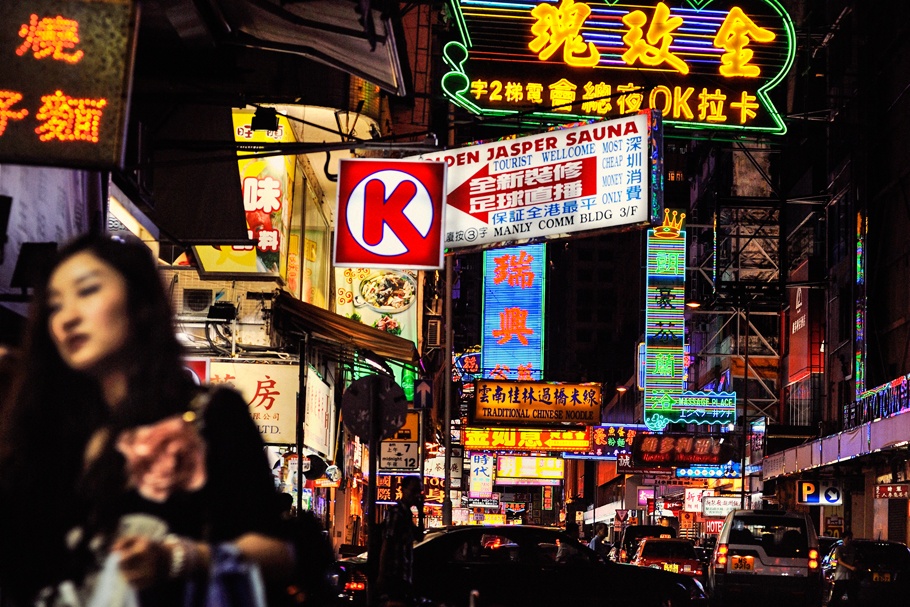 The Mongkok district in Kowloon is one of the most densely populated neighborhoods in the world, and is well known for its underground night life such as the mah jong games, massage parlors, sex workers, and night markets that are overseen by Hong Kong’s organized crime organizations called the Triads. 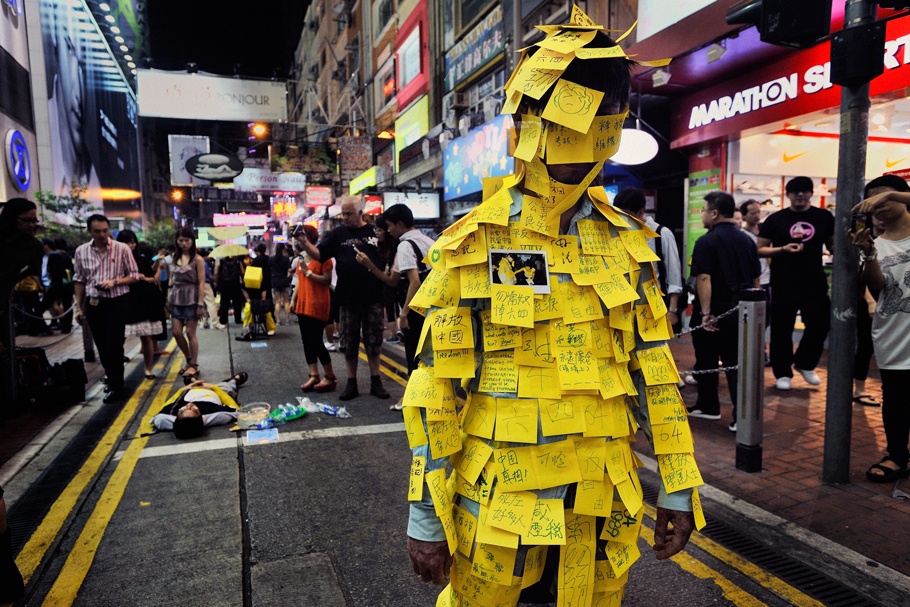 To commemorate the Tiananmen Square demonstrations 22 years earlier, a young artist has invited passers-by to cover him with notes of protest, many directed at the Chinese government and the Hong Kong leadership. China’s tolerance is wearing thin, but the One Country/Two Systems policy still allows freedom of expression in Hong Kong. 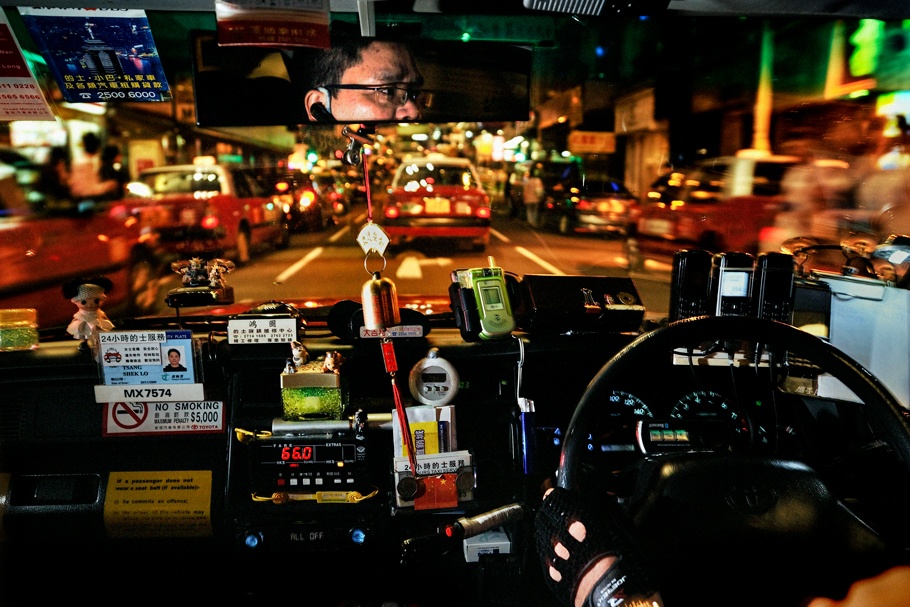 A taxi driver has several extra mobile phones mounted on his dashboard, connecting him to various dispatching syndicates that book discount fares to undercut the traditional first-come-first-serve rule. 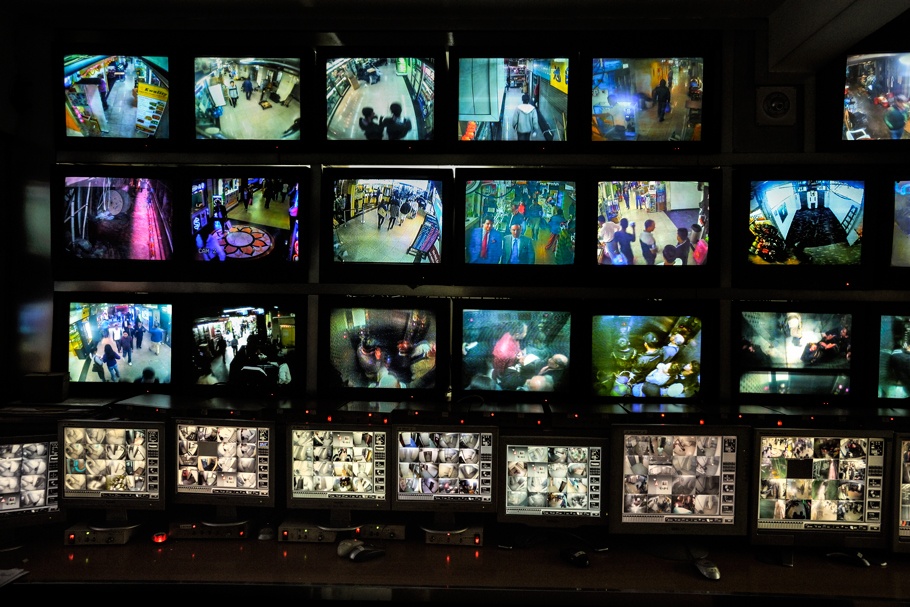 Security cameras eye the traffic in Chungking Mansions, a 17-story hive of market stalls, restaurants, and cheap lodging where global traders do business. Indians, Nigerians, and Pakistanis all show up, buying made-in-China goods to sell back home. This block of grungy apartments has been called “the Ghetto at the Center of the World” by Gordon Matthews, a professor at the Chinese University of Hong Kong. Matthews says that the phone dealers, curry shops, sex workers, flophouse travelers, asylum seekers, and others from over 130 different nations engage in a myriad of daily micro-exchanges that show real world globalization in action. 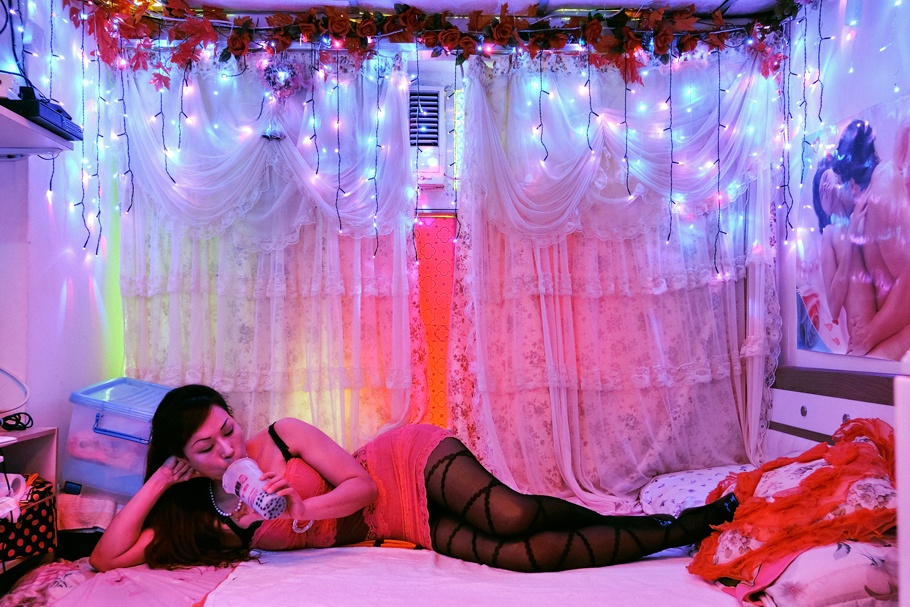 A former factory accountant from northeast China, J currently works in a legal one-woman/one-room brothel on Hong Kong Island. Over the last few years, she has saved enough to buy two apartments back on the mainland, and is now planning to buy another property in Hong Kong. 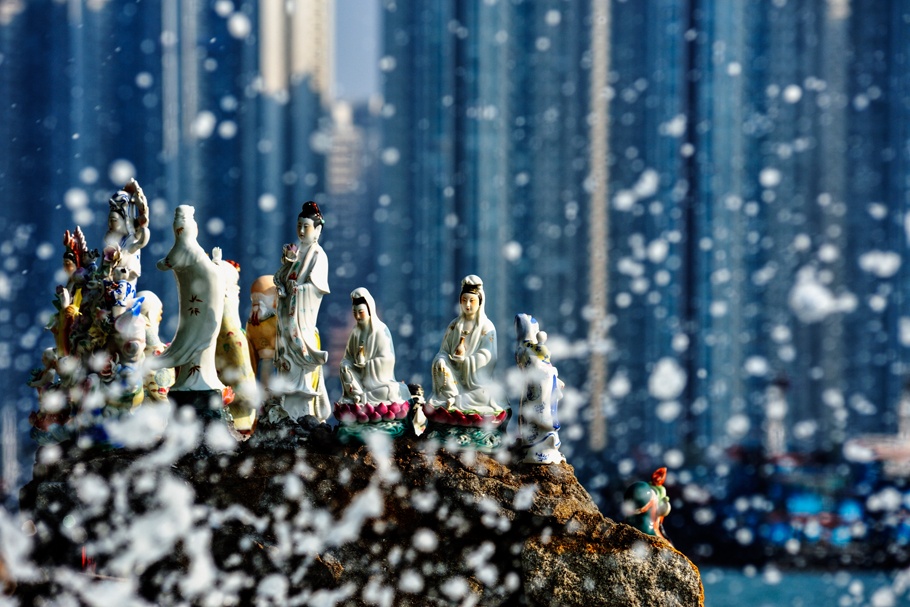 On the wave-sprayed rocks beside Aberdeen Harbor, fishermen and others who work on the ocean have placed figurines of Guan Yin (Kwun Yam), the Buddhist Goddess of Mercy, for her protection at sea. Such everyday expressions of traditional Chinese belief in the metaphysical are far more common in Hong Kong than in mainland China, where many “superstitious” folk customs were wiped out during the Cultural Revolution. 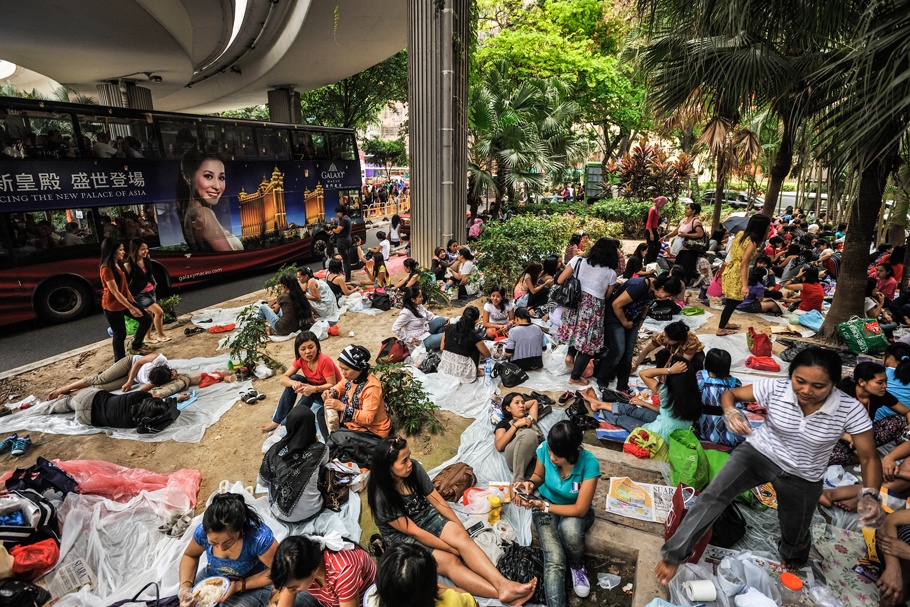 Hong Kong employs about 300,000 migrant domestic workers, mostly from Indonesia and the Philippines. On Sundays—their only day off—they crowd the Central district and Victoria Park, where here some Indonesian women enjoy their day off under a highway overpass. Political organizers also use Sundays to rally these workers to fight for residency rights. 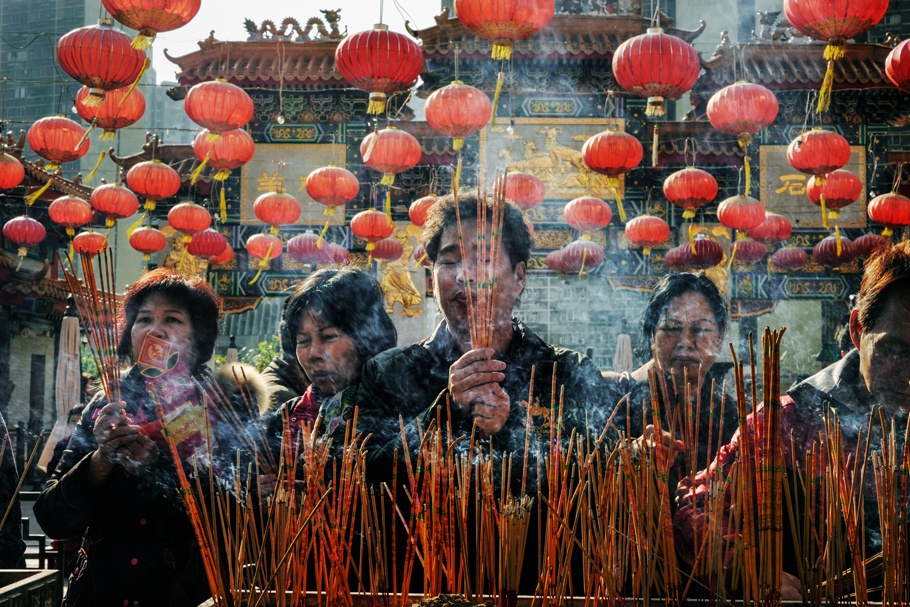 Wong Tai Sin Temple, a Taoist place of worship known for fortune telling, is popular among Chinese tourists, who make up about 70 percent of the temple’s visitors. The day before the annual Cathay Pacific Hong Kong International Races at the Shatin Horse Track, the temple also draws in many gamblers seeking spiritual guidance to make winning bets. 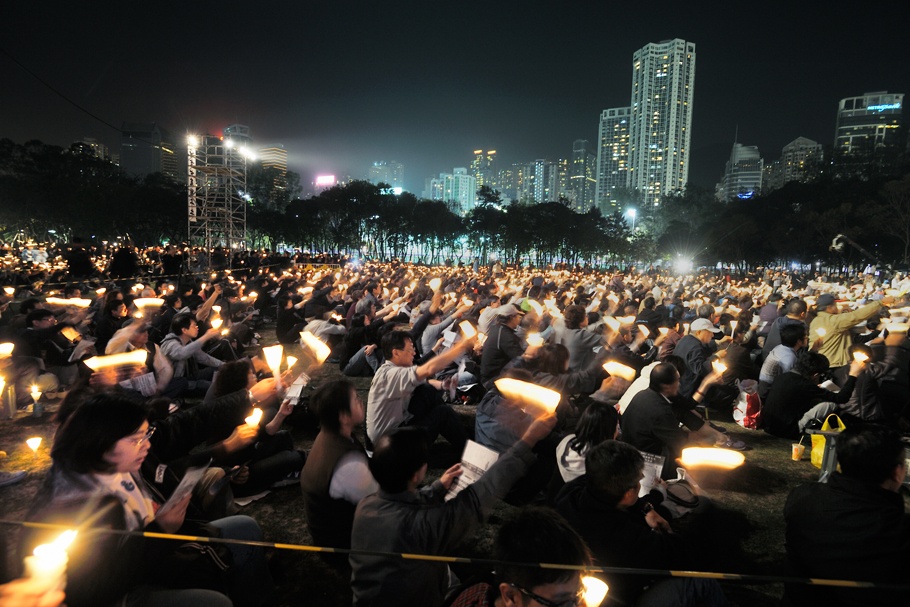 The Hong Kong and Shanghai Banking Company, headquartered in a 1986 Norman Foster-designed post-modern cathedral to capital, is arguably the most powerful corporate institution in the city. Hong Kong’s traditionally dominant financial infrastructure continues to thrive as it serves the Chinese investors and institutions that contribute an ever-increasing share to Hong Kong’s wealth and business. 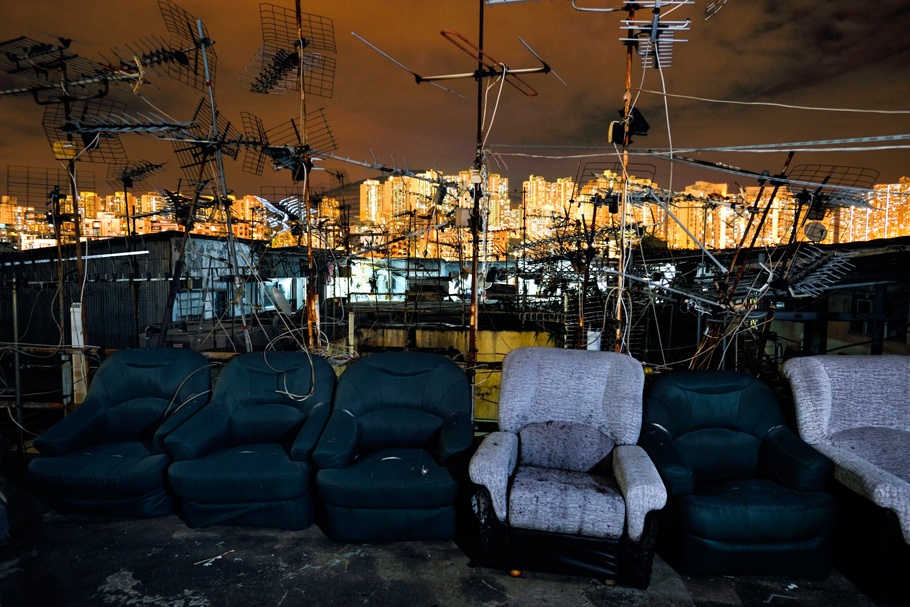 Beat-up armchairs await residents of an informal settlement built on the top of a factory building. Middle- and working-class Hong Kong residents are feeling the housing squeeze from China on two sides. While wealthy mainland Chinese investors drive up real estate prices, affordable housing grows scarce in one of the world’s most expensive cities. At the same time, Chinese migrant laborers are crossing the increasingly open border to the north, which creates competition even for these dilapidated squatted rooftop units in industrial neighborhoods. 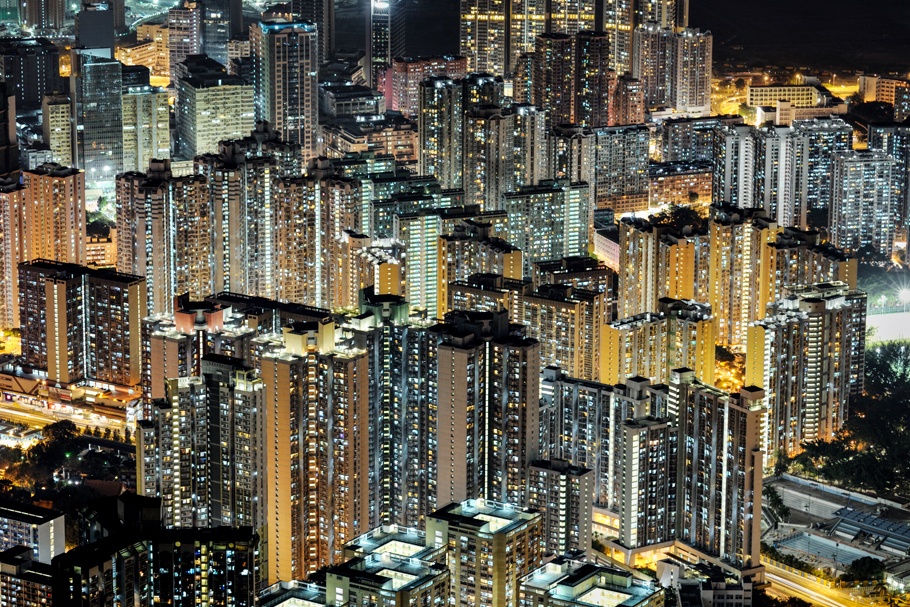 A forest of high-rises, mostly public housing projects, covers Kowloon, one of the world’s most crowded pieces of real estate. Despite Hong Kong’s glittery reputation, almost half of its seven million residents live in subsidized housing, with the real estate market pushing apartments beyond middle class affordability. Hong Kong’s Gini coefficient, which measures the gap between wealthy and poor, is the largest among highly developed nations and states. The gap has been widened by the influx of both low-income migrants and multi-millionaires from China.

Mark Leong is a fifth-generation American-Chinese from Sunnyvale, California. After graduating from Harvard University in 1988, he was awarded a George Peabody Gardner Traveling Fellowship to spend a year taking pictures in his ancestral homeland. In 1992, he again visited China as an artist-in-residence at the Central Academy of Fine Art in Beijing, sponsored by a fellowship from the Wallace Foundation. In 2003, Leong joined the photo agency, Redux Pictures. His book China Obscura was published in 2004, with a selection of those pictures exhibited in the Open Society Foundations’ Moving Walls 12.

Leong’s photographs have appeared in Fortune, GQ, National Geographic, the New York Times Magazine, New Yorker, Smithsonian, Stern, and Time. His work has been recognized with awards from the National Endowment for the Arts (1992), Fifty Crows (2002), and the Overseas Press Club (2007), among others. In 2010, he was named the Veolia Environnement Wildlife Photographer of the Year for his regional coverage of the Asian wildlife trade. Exhibitions of his work include solo shows at the Carpenter Center for the Visual Arts at Harvard University (1991), the San Francisco Arts Commission at City Hall (2007), and the Leica Gallery Frankfurt (2008).

The Hong Kong I first visited in 1989 was the essential gateway into China—a British-controlled laissez-faire playground of lucrative pragmatism that fluidly balanced East and West, ancient and hyper-modern, legitimate and underworld. Upon the 1997 transfer of sovereignty from the United Kingdom to China, Beijing’s assurances that “Hong Kong would remain unchanged for 50 years” promised to showcase its good-faith efforts to foster democracy and rule of law. Some 17 years on, however, the lack of universal suffrage paired with fading relevance compared to booming megapolises like Shanghai and Shenzhen are provoking anxiety that Hong Kong is becoming just another Chinese city.

There might be less concern if this were making everybody rich, but Hong Kong’s growing wealth gap is the widest on the United Nation’s list of most highly developed economies. Property values skyrocket while nearly half the population lives in subsidized housing. Even gangsters complain that the scramble for scraps has displaced the sense of brotherly purpose that once drew them in. A former enforcer for one of Hong Kong’s organized crime gangs, the Sun Yee On triad, told me, “It’s more of a business for profit now.”

Hong Kongers who once looked down on visiting Chinese have become resentfully dependent on their spending. They call them “locusts” for consuming apartments, Gucci handbags, iPads, and even—until restrictions were recently introduced—maternity beds, as mainlanders seeking Hong Kong IDs for their babies crowded local mothers out of hospitals. The territory’s reputation for apolitical materialism has given way to constant angry protests concerning residency, spiritual rights, artistic expression, migrant domestic workers, and especially against a Hong Kong leadership seen as more interested in a self-preserving relationship with property tycoons and the China elite than general welfare and freedoms.

Is Hong Kong’s identity at risk? My pictures—of neon streets and rooftop shanties, of globalized domestic workers and elite financiers, of entrepreneurial sex workers and peddlers at international black markets, of open political expression and ancient Chinese tradition untouched by revolutionary purges—show the mash-up that distinguishes Hong Kong from the mainland. At the same time, I hope my work conveys the mounting imbalance and pressure after nearly two decades of Chinese rule.