In Ruins: The Fall of Greek Industry 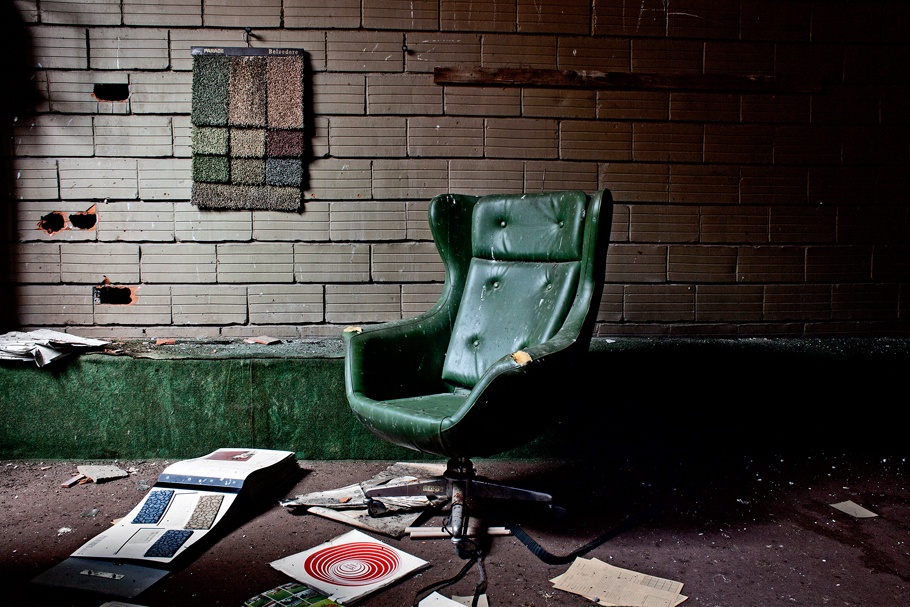 The manager’s seat left behind at the John Phil carpet factory in the village of Stavroupoli, Xanthi, in northern Greece. The company was named after its owner, Ioannis Phillipides. It first opened in 1966 in Athens, but was completely destroyed by a fire. In order to rebuild the company, Phillipides moved to northern Greece to take advantage of the low two-percent VAT (value added tax) and the generous 28-percent subsidy offered by the Greek government. Locals say that at one point, half of the village was employed by John Phil. 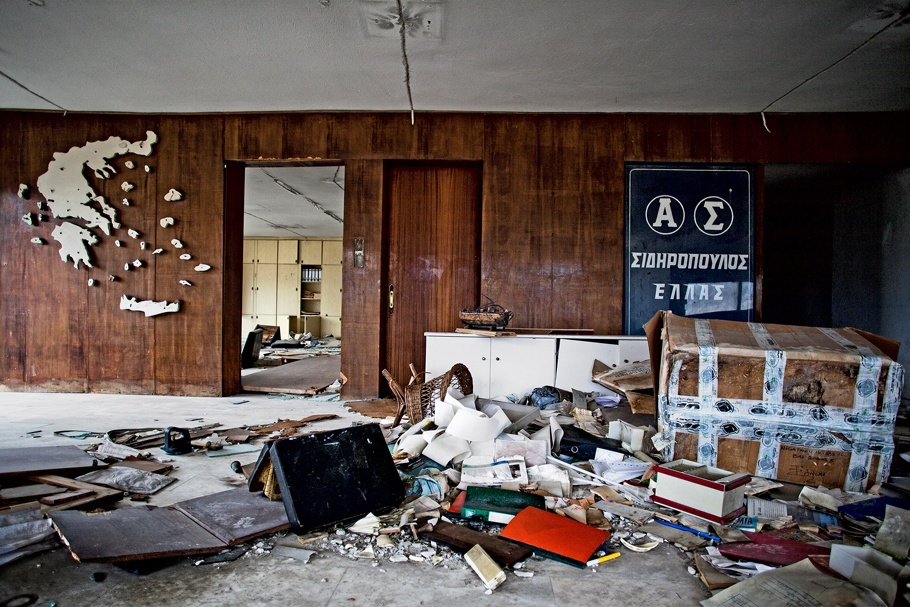 The Sidiropoulos factory produced packaging for dried fruit and went out of business in 2008, when the financial crisis struck Greece. The relief map of Greece on the wall is one of the few things that remained intact in the factory. 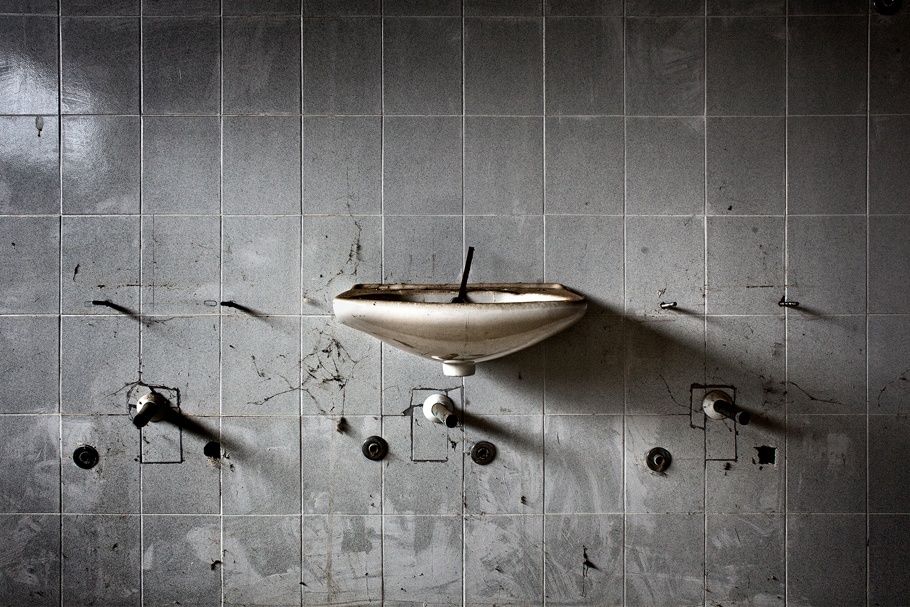 Whatever was left after factories were closed or abandoned has been taken by looters to sell as scrap. 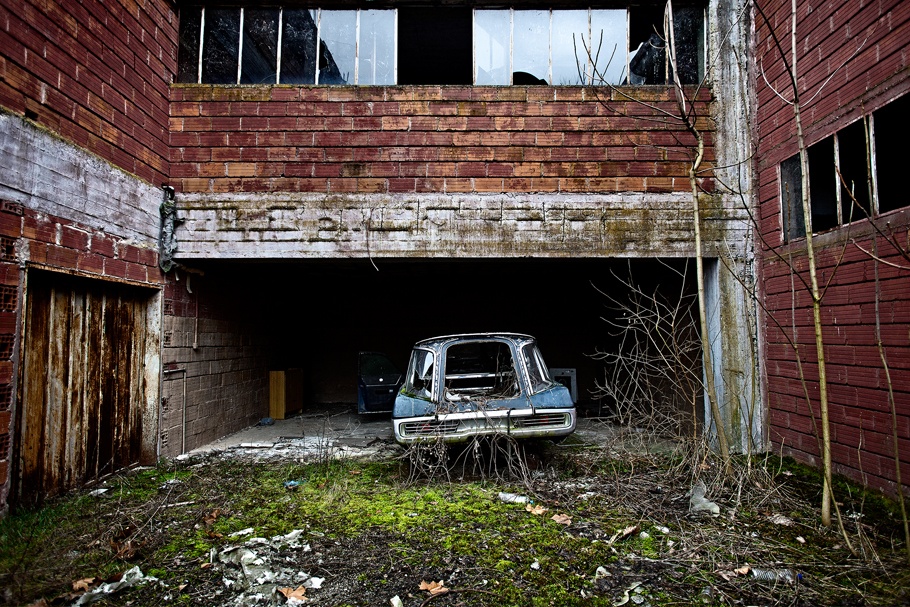 An abandoned hearse parked in the destroyed John Phil carpet factory in the village of Stavroupoli. The company was named after its owner, Ioannis Phillipides. 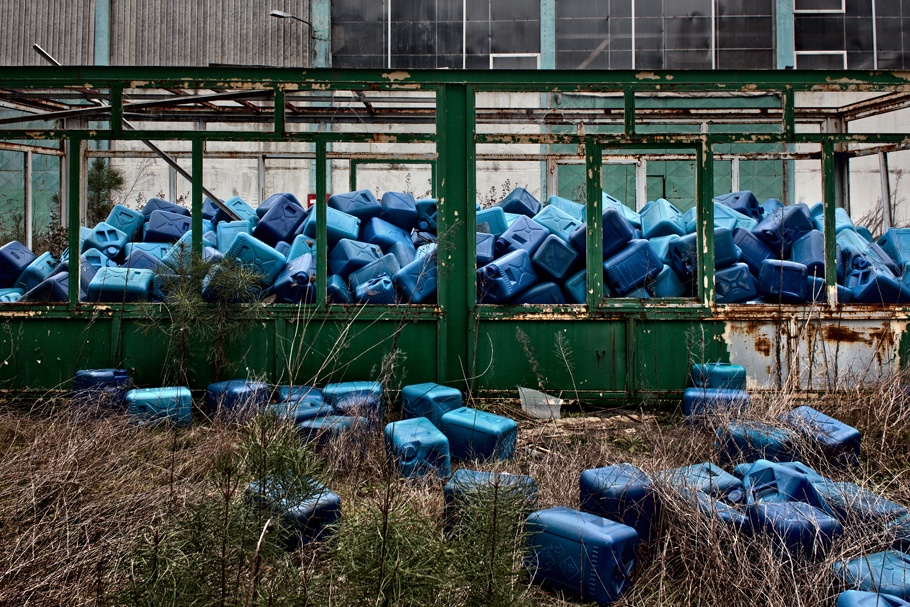 A large pile of plastic containers littering a factory yard is all that remains after this plastics company closed down. 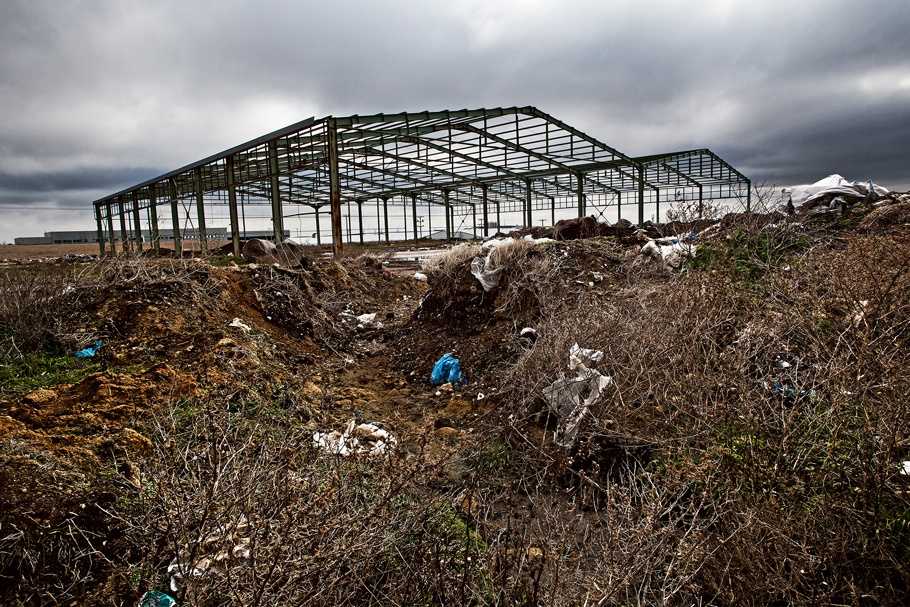 After the financial crisis, the Greek landscape was littered with empty and destroyed warehouses and buildings. 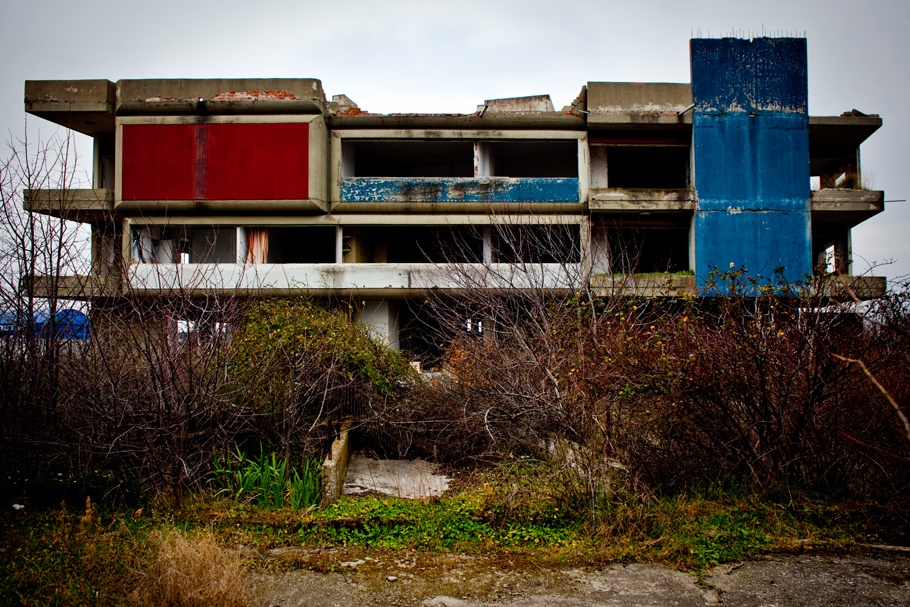 The Sidiropoulos family’s abandoned packaging factory. The factory used to be a successful business that was eroded and eventually destroyed by the financial crisis. 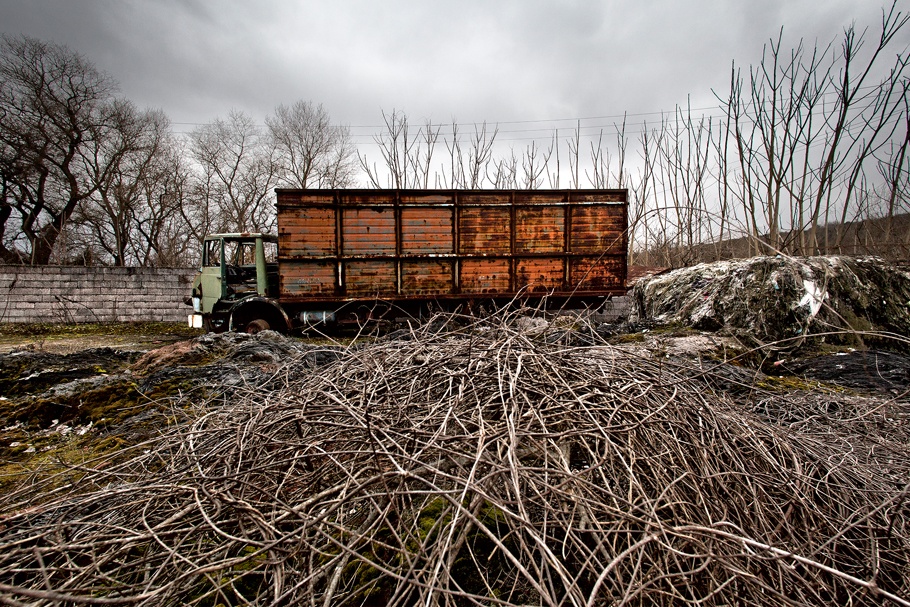 An abandoned truck corrodes on top of a pile of carpets outside the John Phil carpet factory. 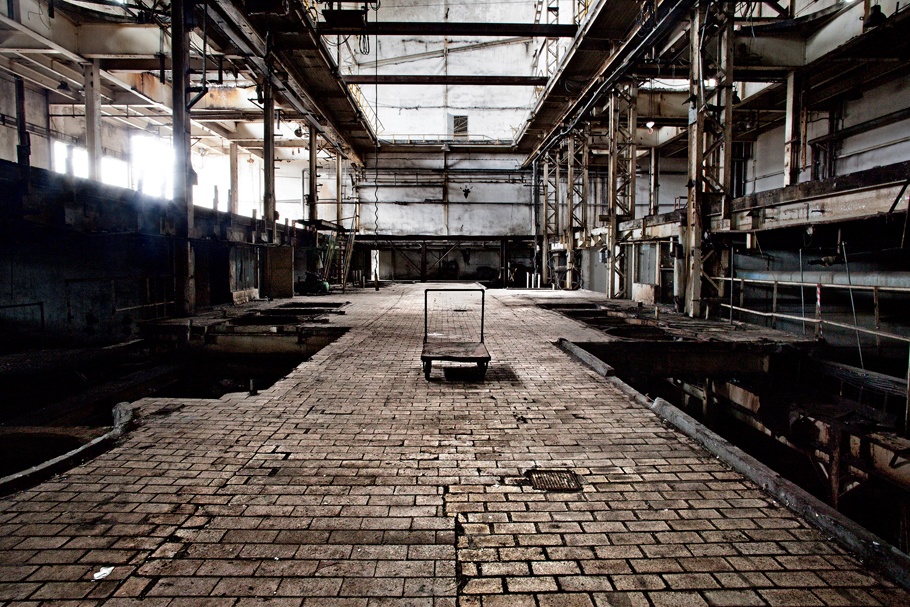 The remnants of a sugar factory situated in Xanthi, northern Greece, is open to looters. Six sugar factories that were established in the 1960s are all owned by the Hellenic Sugar Industry, a state-owned company that continues to hold the monopoly today. After an earlier effort failed, the Greek government invited private businesses in 2013 to purchase shares in the sugar company in an attempt to revitalize the business through privatization. 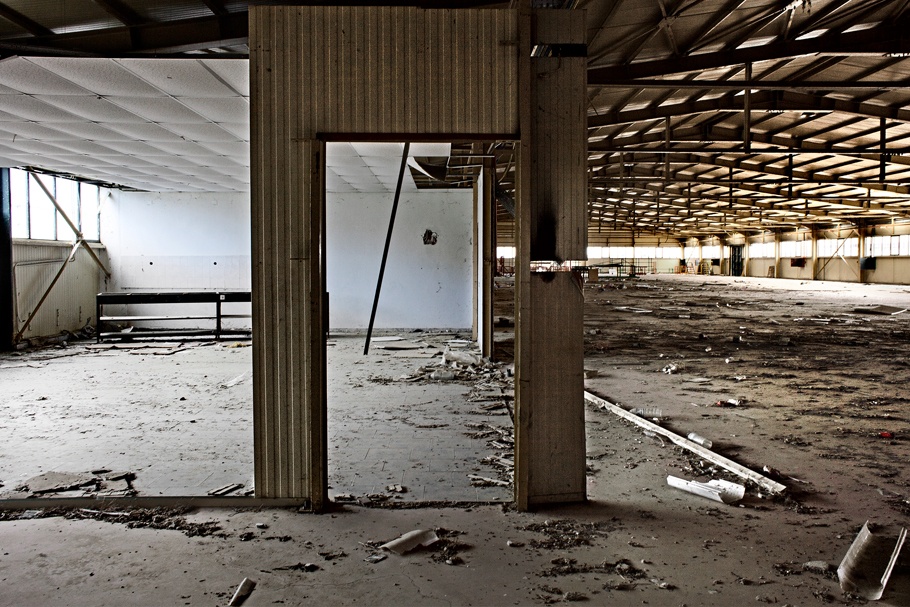 A doorframe is all that remains inside a plastics factory in the Evros region. Looters stripped factories in the region bare of everything of value to sell as scrap.

Nikos Pilos is an award-winning photojournalist currently based in Athens, Greece. He has traveled extensively to document war, natural disasters, poverty, and socioeconomic struggle.

Since his first assignment in Lebanon in 1988, Pilos has covered major historical events such as the overthrow of Nicolae Ceauşescu in Romania, the Israeli-Palestinian conflict, the conflicts in the Balkans, and the war in Iraq, where he spent 100 days among Iraqis, without being embedded with the U.S. Army. Most recently, he covered the antigovernment protests in Turkey, and for the past three years, his long-term project has been documenting the consequences of the Greek economic crisis.

His work has been exhibited in Belgium, China, France, Germany, Greece, and Turkey, among other countries.

In 2008, when Lehman Brothers declared bankruptcy and other large American banking institutions struggled to stay afloat, Greeks thought their economy was secure. Their country hadn’t bought any toxic assets, and they comfortably watched the news of the U.S. economic meltdown on television.

A year later, the financial crisis hit Greece and left the northern region of Thrace with fewer than 10 working factories and an unemployment rate of 50 percent. Thrace’s industrial zone—once a constant stream of activity—was now littered with abandoned buildings and factories.

Today, Greeks are trying to survive their country’s fifth economic recession. The destruction of Greek industries has resulted in unemployment levels of up to 27 percent and youth unemployment of 65 percent. Millions of jobs have been lost and thousands of businesses have closed. My hometown of Corfu has been deeply affected. The crisis is impossible for me to ignore.

I decided to show this catastrophic loss by photographing abandoned factories in Thrace. It is a place where businesses were created overnight with state subsidies, but with little planning and supporting infrastructure—like roads and railways—to transport goods to markets.

The industrial boom in the northern region of Greece started in 1976, when the Greek government subsidized the construction of hundreds of factories. The goal was to entice Greeks—particularly large numbers of 18- to 50-year-olds—to not emigrate to Germany and the United States for overseas employment. From 1982 to 1994, seven government development acts invested approximately one out of every four euros in the region. More than 370 businesses applied for these loans, and the government estimated that this development would create nearly 27,000 jobs. Banks also provided generous loans, and the emigration problem was temporarily averted as jobs became plentiful.

With the huge influx of money, the region’s image changed completely. Thrace’s industry boomed, supported by laws that boosted development. But it was growth without strategy or supervision. Many opportunistic people arrived and took the money without building businesses, and few places in southern Europe have ever experienced such rapid deindustrialization.

Thrace now feels more like a cemetery, or a place of ruins. Like a ghost town, buildings are empty of people but still contain decorations or office equipment, evoking the feeling that the employees left in a hurry with little forewarning of the crisis to come.