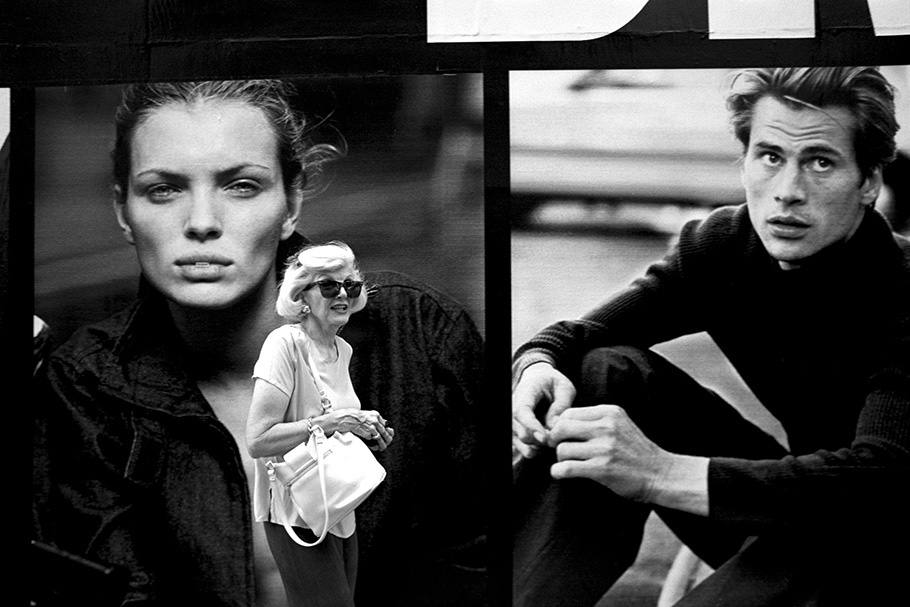 In between auditions, Gloria Barnes confronts youthful images of beauty. She recently returned to her own modeling career after raising a family, and is one of a growing number of models in the Ford Agency’s Classic Division. In the past, older models were relegated to shoots for pharmaceuticals and retirement communities; today, they are used for fashion and glamour. Since resuming her career, Gloria has appeared in such magazines as Vogue, Glamour, and Marie Claire. 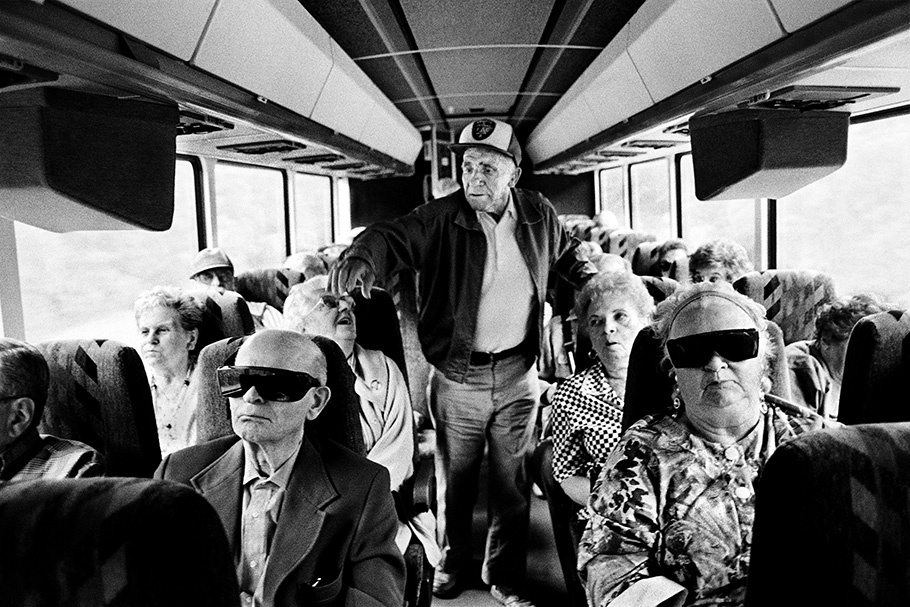 Millions of seniors are succumbing to the allure of gambling, an especially disconcerting trend considering their limited incomes. A group of seniors from Flushing, NY, head off for a day of gambling in Atlantic City. They often gamble to fend off loneliness and boredom, but the financial results can be devastating. 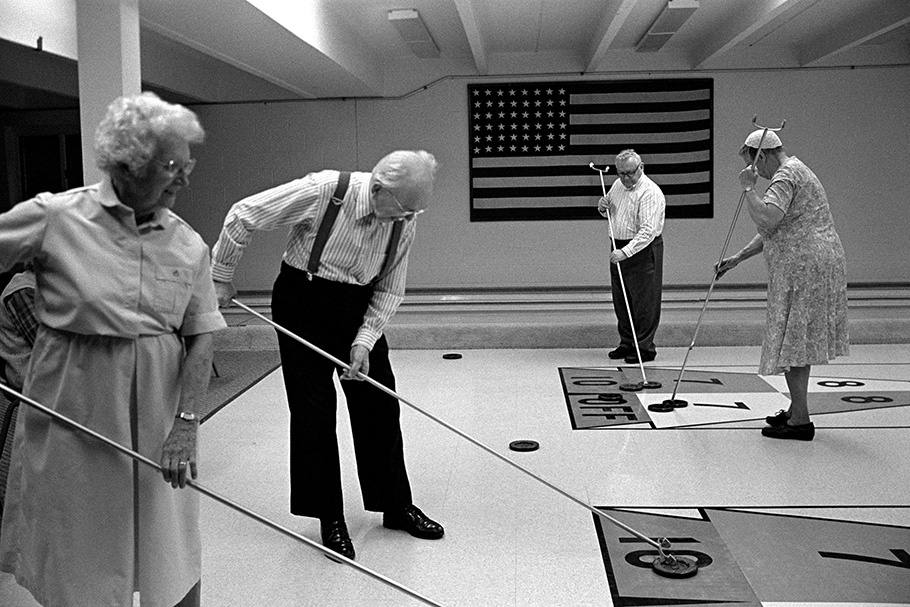 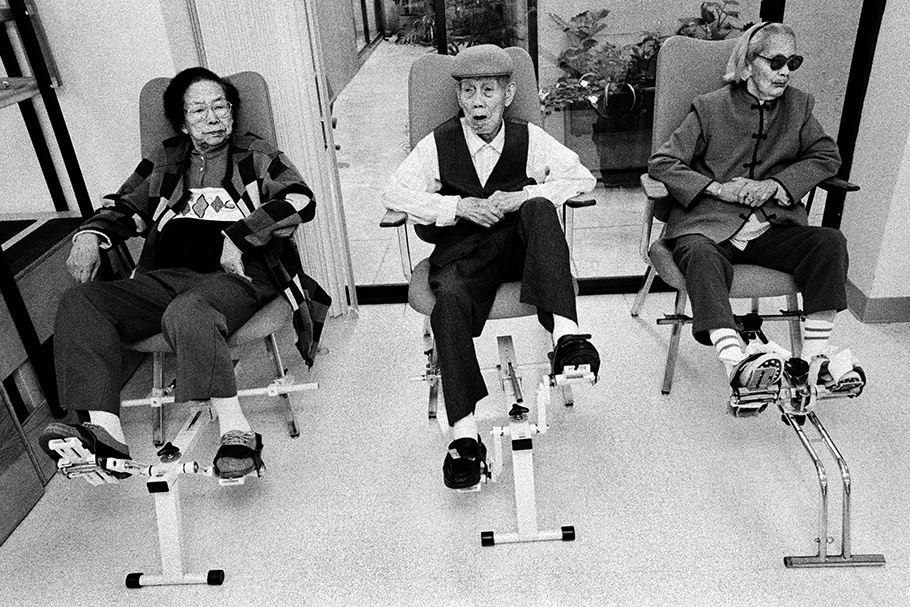 Wong Wah Po (center), 104, immigrated to America when he was in his late 80’s; he became a U.S. citizen at 103. Wah Po represents a growing trend of elderly immigrants who come to live out their lives in America to be closer to their children. Although he has since died, he used to live at On Lok, an organization that has become a national model for keeping elders out of nursing homes by providing healthcare, daycare, and social services. 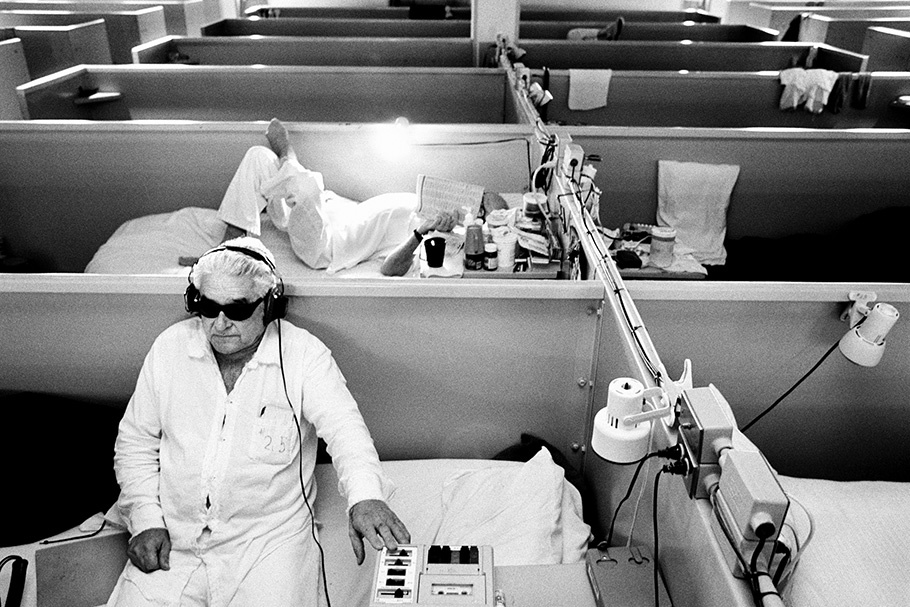 Jesse Rodriguez Trevino, 62, has been in and out of Texas prisons since 1957. In 1988 he began serving his most recent sentence—25 years with no parole for assault with a deadly weapon—in a geriatric ward in a Huntsville, Texas prison. 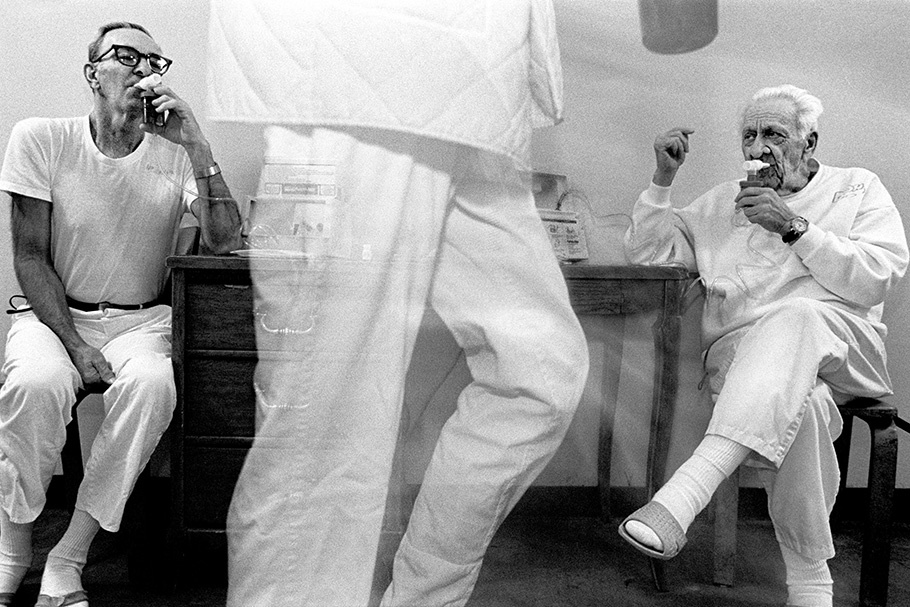 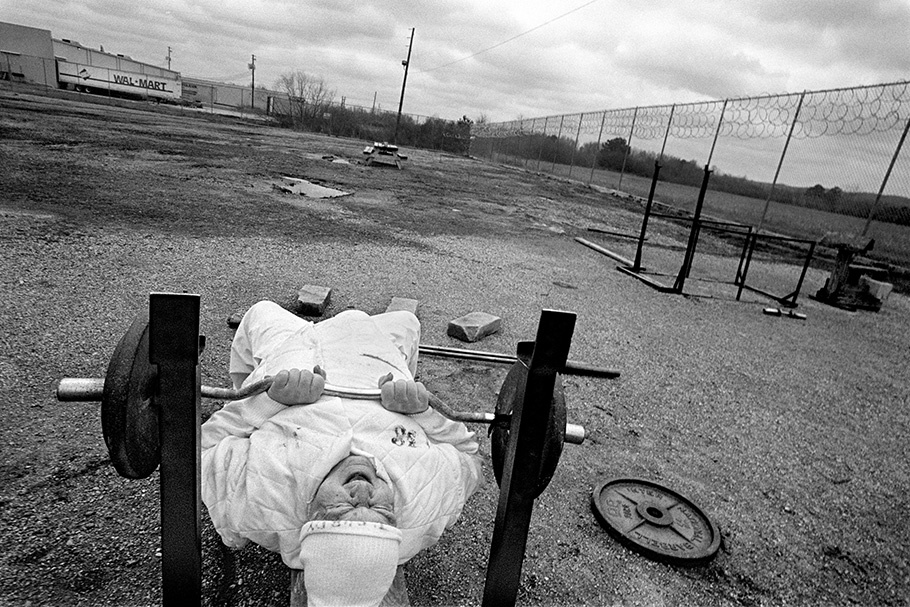 Truman Purdy, 61, lifts weights in the Hamilton, Alabama exercise yard. His 25-year sentence for sexual abuse and sodomy began in 1992. 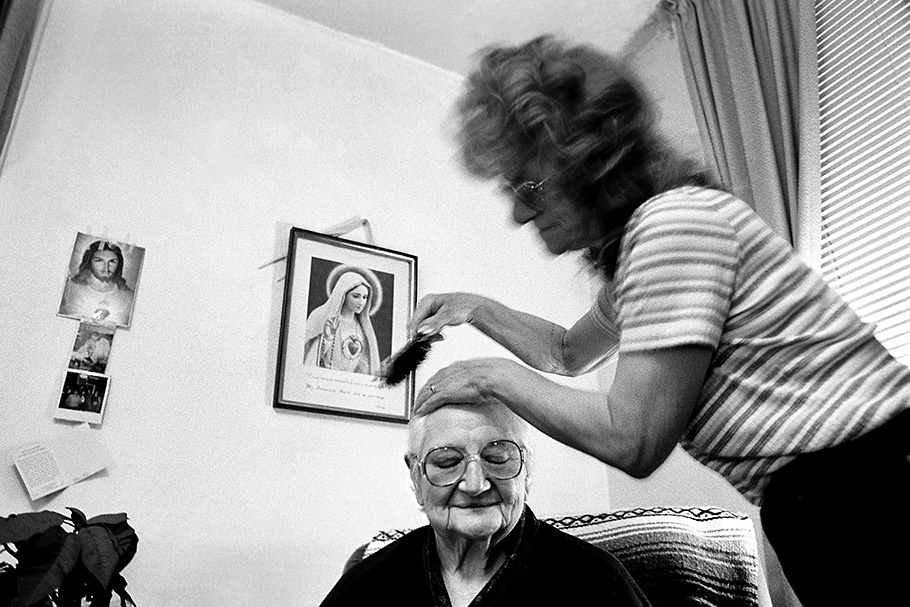 Martha Pollack, 56, has been taking care of Rose Polo, 86, for two years. Rose, who suffers from dementia and diabetes, previously lived with her daughter, but her health needs became too great to manage. She was placed in Martha’s home as part of an innovative foster care program in New Jersey. The cost to the state is about half that of a nursing home. 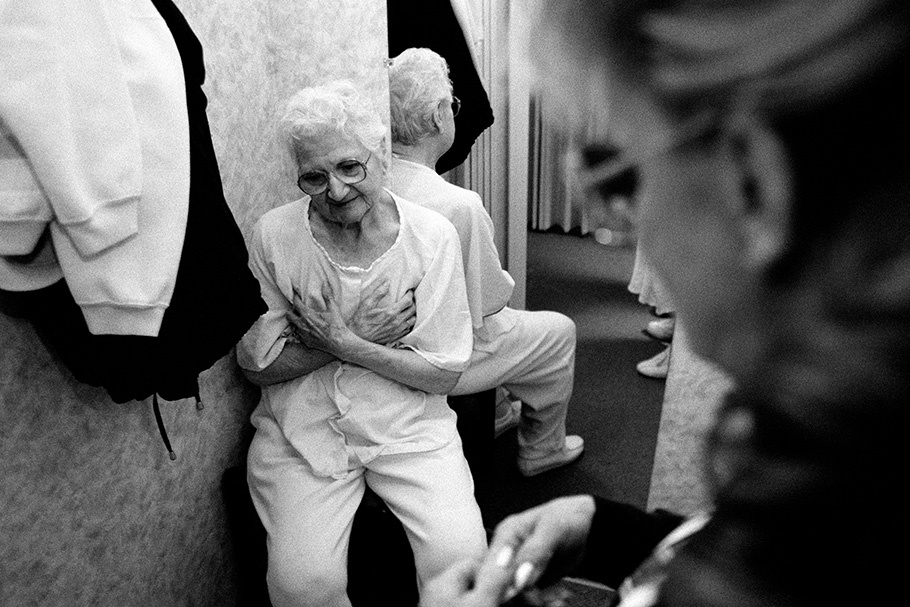 Rose Polo had a mastectomy last year and Martha, her home care provider, takes her in for regular mammograms. 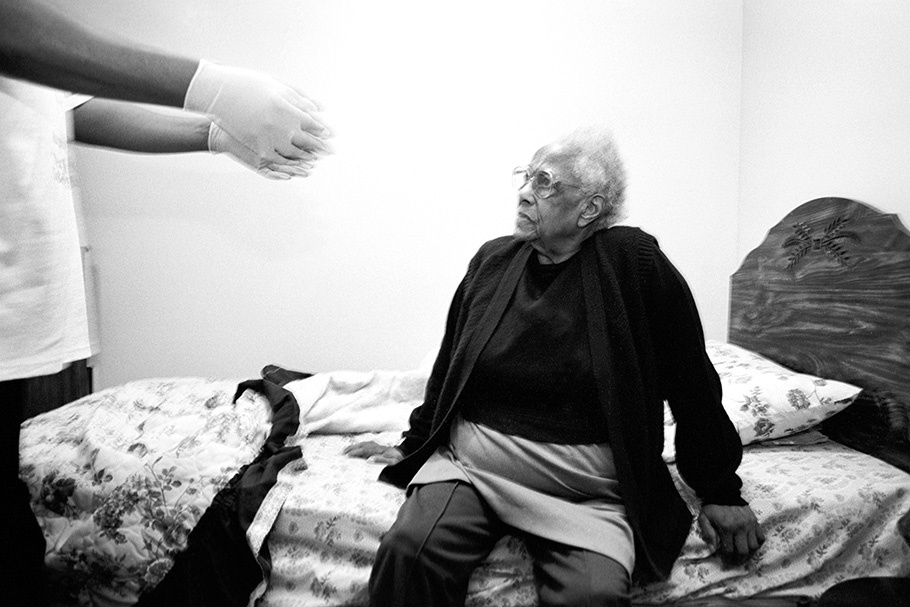 Francis Chandler, 52, and her husband have taken care of Alphonsa Joyner, 84, for the past two years. Alphonsa, who suffers from Alzheimer’s, has seven living children, none of whom can take care of her. If Francis gives up on her, Alphonsa’s only option is a nursing home. 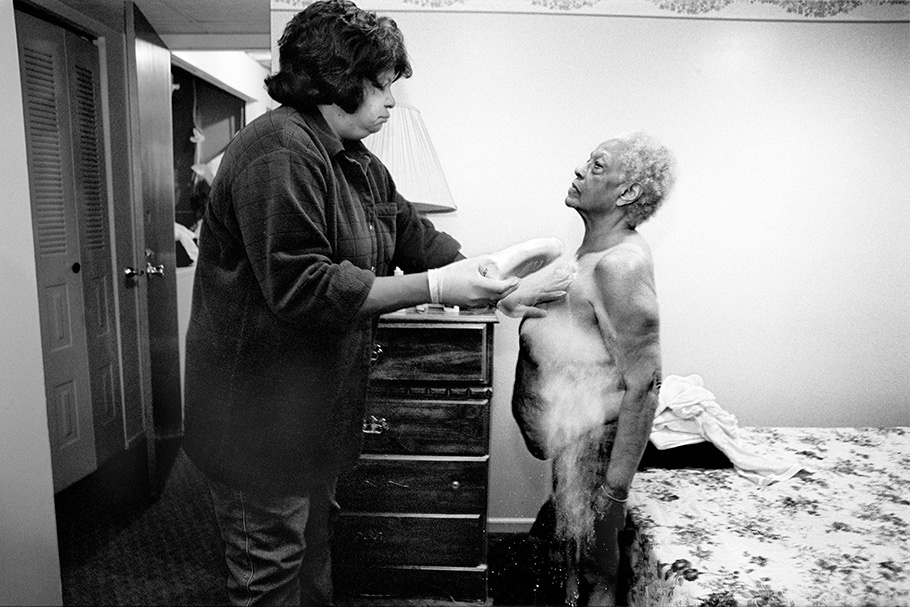 Francis Chandler, shown powdering Alphonsa Joyner after a bath, had to put her own mother in a nursing home before her death because she needed to work. Ironically, she can get paid to care for a stranger at home, but not for a family member. 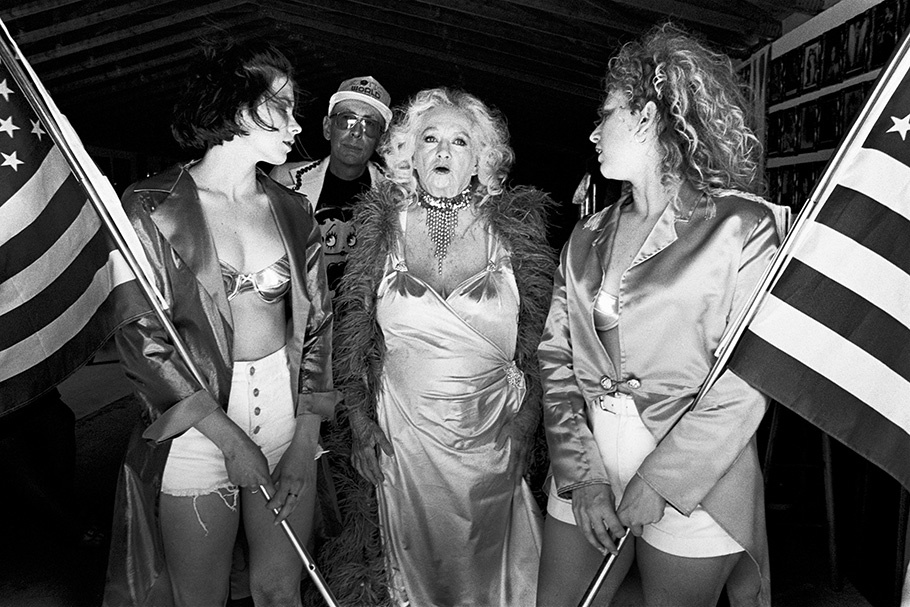 At the 41st Annual Striptease and Miss Exotic World dance competition, veteran dancers share their expertise with a new crop of girls. Dixie Evans, 72, is the grand dame of this extravaganza. 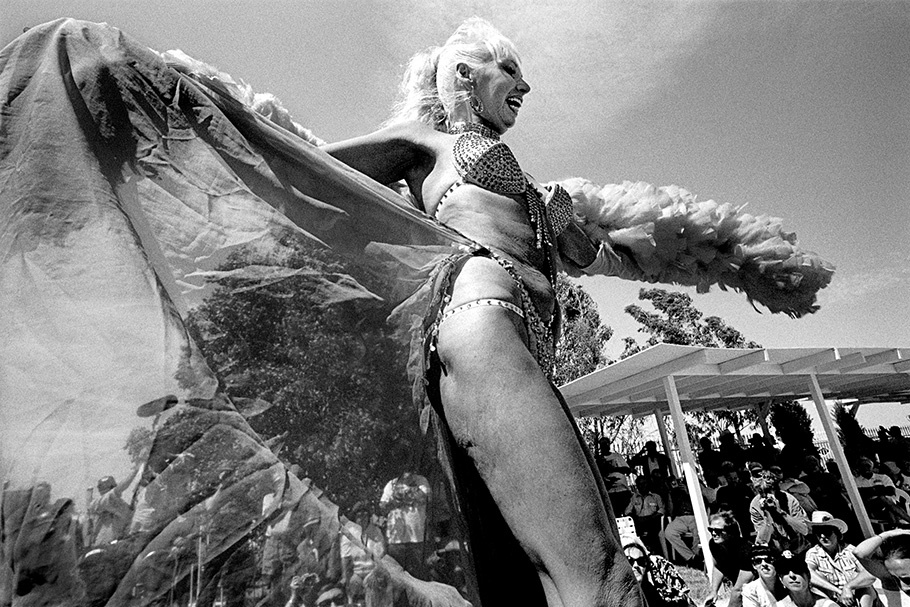 Daisy Alexander, 53, an exotic dancer who regularly performs in clubs in the Los Angeles area, came to the Mojave desert to compete in the Miss Exotic World competition. 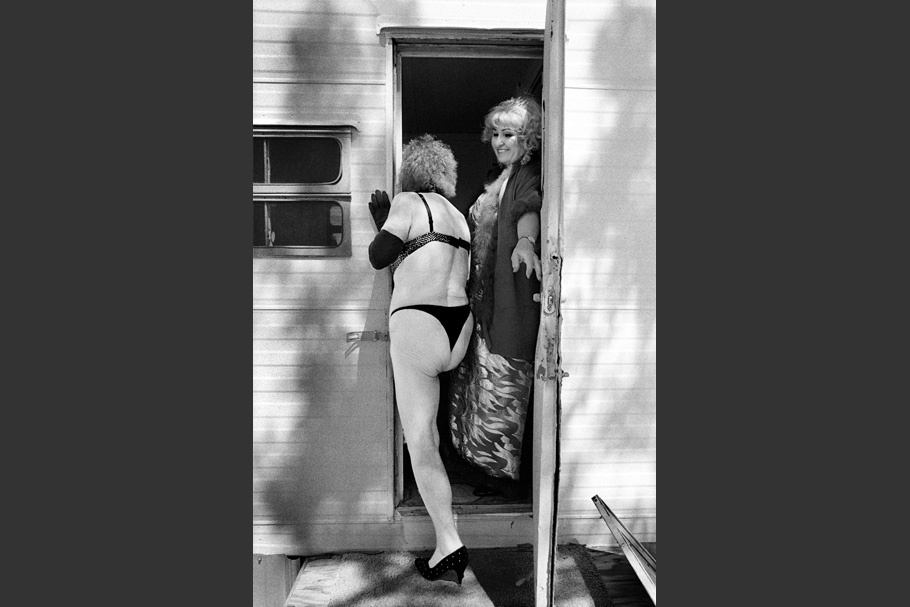 One of a dozen seasoned dancers at the Miss Exotic World competition slips into her dressing room after her performance. 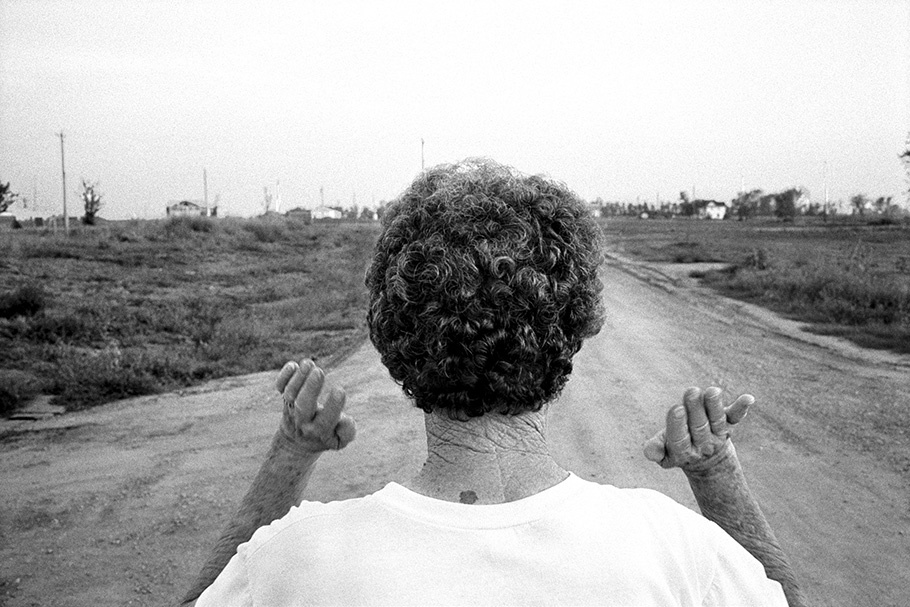 On May 30, 1998, a tornado virtually leveled Spencer, South Dakota, a town populated mostly by older folks. Delphia Stuby, 72, has been a widow for 40 years and raised six children on her own working as a bartender. Despite suffering a heart attack two days after the cyclone hit, she has taken a tornado-be-damned attitude and plans to rebuild. 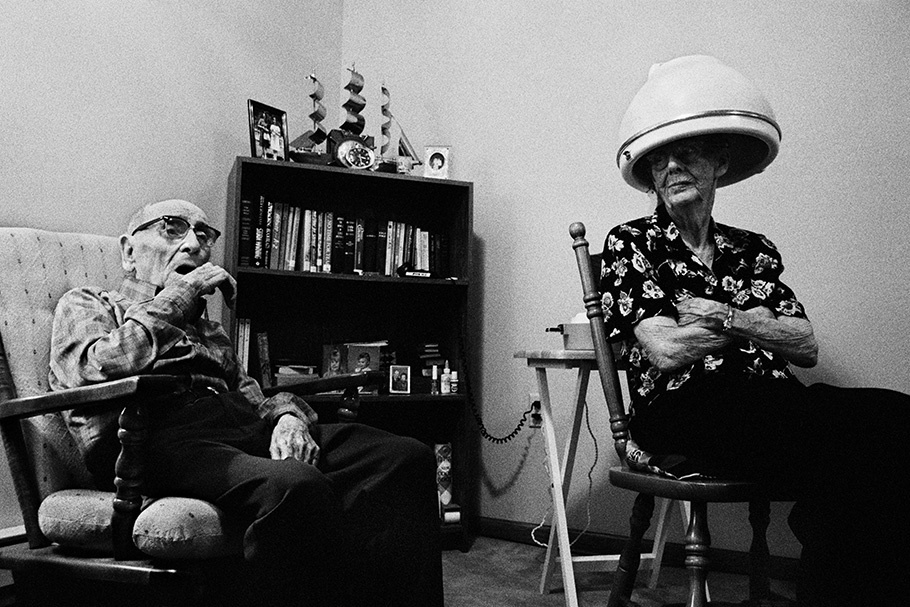 Jim and Lucille Mone, both in their nineties, were relative newcomers to Spencer, South Dakota—only 25 years in town—when the tornado struck. Jim suffered broken ribs, arm, and collar bone. The couple plans to live out the rest of their days at Leisure Living Retirement Home. “The only property we have in Spencer now is two graves,” says Lucille. 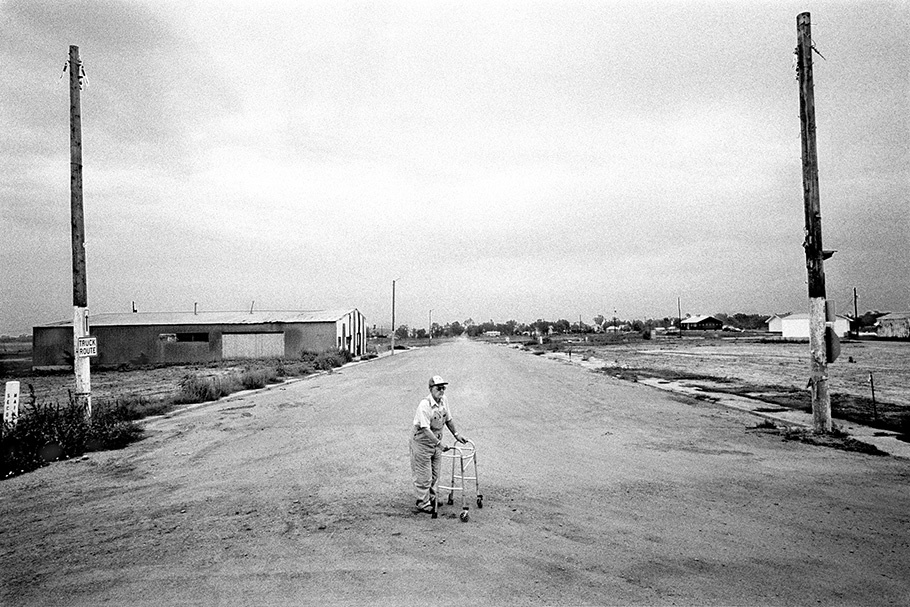 Marvin Wilson, 94, surveys what is left of downtown Spencer, South Dakota, just two blocks from his home. He is determined to continue living on his own, but without neighbors or any local stores he doesn’t know how he will manage. 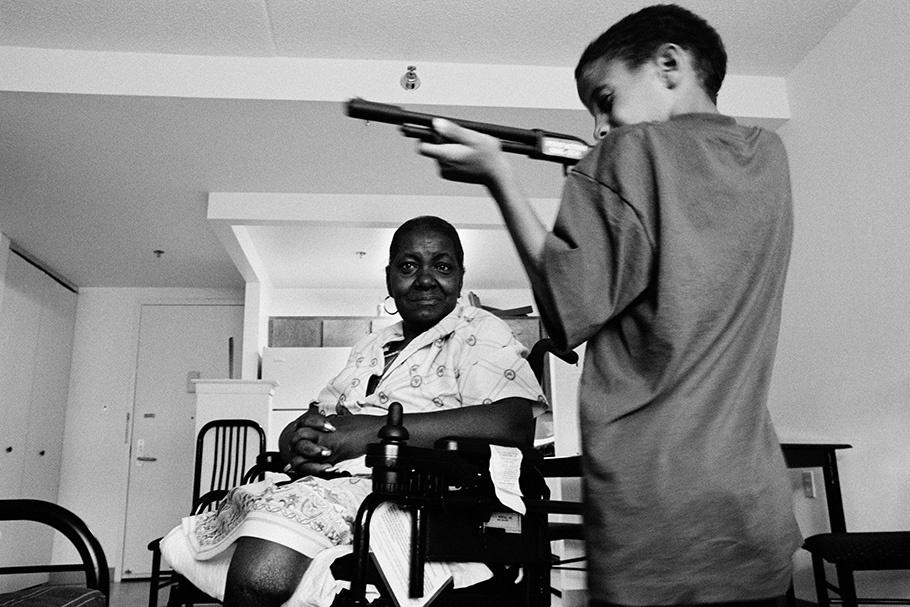 Nilda Matias, a 64-year-old grandmother from Puerto Rico watches her 8-year old grandson Nyco in their home in New York City. Matias is a double amputee from diabetes and she is also the legal guardian of Nyco. There are currently four million children being raised by their grandparents in America. 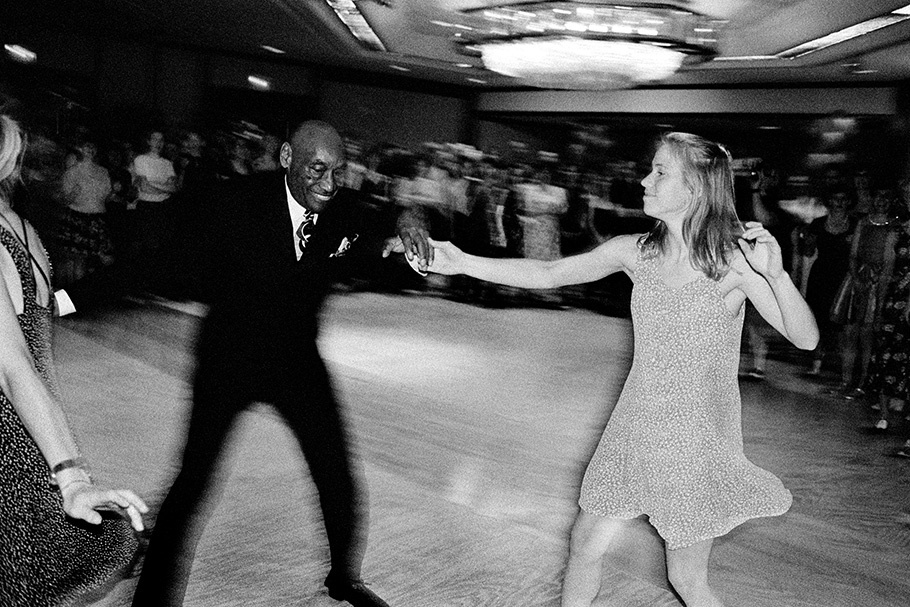 Frankie Manning was one of the original Lindy Hoppers at the Savoy Ballroom in Harlem in the 1930s. He still travels the world teaching to sold out classes. Here, he celebrates his 84th birthday by dancing with 89 women at his party in Baltimore, MD, 1998. 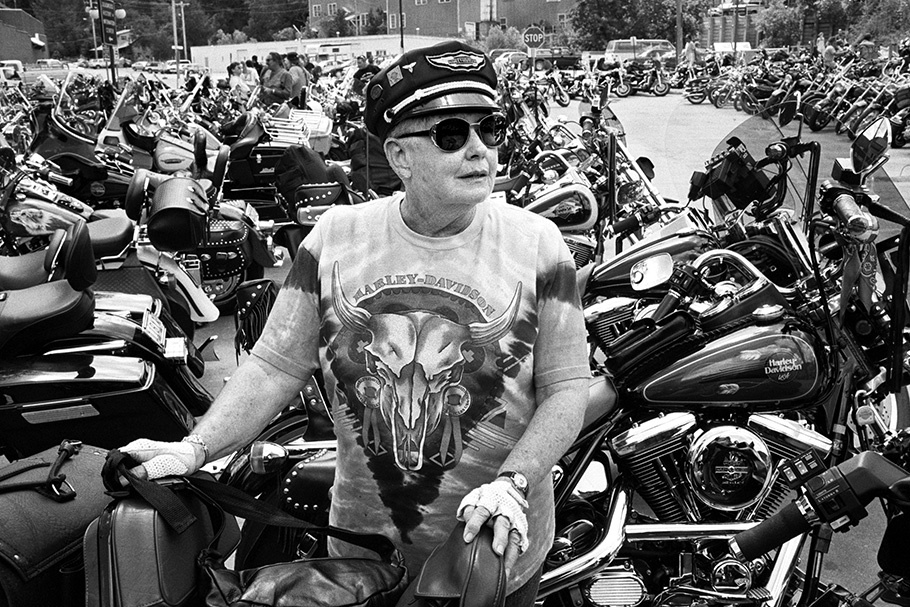 Marlene Patton, 67, one of the founders of Retreads International, stands among motorcycles in Sturgis, S.D. in 1998. A retired buyer for a glass manufacturer, Marlene says she has clocked "only" 350,000 miles on her Harley. Patton was crowned queen at the Sturgis Motocycle Rally in 1977.

For more than two decades, photojournalist Ed Kashi has been producing stories that explore the human condition and focus on people who are largely ignored by the mainstream media. He has worked in over 45 countries and has captured such diverse subjects as the heroin problem in Poland, culture and nightlife in the reunified Berlin, and overpopulation in Cairo’s City of the Dead.

His in-depth look at the Protestant community in Northern Ireland spanned three years (1988–1991) and was awarded a WESTAF NEA grant. The work culminated in a self-published book, The Protestants: No Surrender. More recently, Kashi spent several years documenting the lives of Jewish settlers in the West Bank. This work was published worldwide, and a photograph from this essay received an award in the World Press Photo 1995 competition.

Since 1991, Kashi has completed eight stories for the National Geographic, including such topics as the Kurds, water problems in the Middle East, Syria, Beirut, the Crimea, an expedition of the first descent of the Shuiluo River in China, Pakistan, and a story from Africa which is due to be published within the year (1997).

Kashi is currently working on a long-term project, Aging in America, which has received grants from the Open Society Foundations’ Project on Death in America and the Robert Wood Johnson Foundation. The first feature from this project focused on the “graying” of America’s prison population and received an award in Pictures of the Year 55 (1997).

The twentieth century has given us the gift of longevity. It has also exposed some disturbing wrinkles in our society. For decades, our country has ventured down the road of prosperity, kneeling at the altars of youth and independence. Along the way we have marginalized our elders and behaved as though they should be able to take care of themselves. With more people living longer than at any time in history, our families and social institutions are straining under the pressure of the needs of the elderly.

In 1995, after more than eight years of working predominantly outside the United States, I wanted to identify one of the great themes impacting America during my lifetime and explore a universe with cutting-edge social and political issues. This personal, intellectual, and ultimately journalistic process led me to Aging in America.

Four years ago, I began documenting a new breed of “community” that has evolved to address the needs of elderly people. My wife and collaborator, writer Julie Winokur, has joined me in this quest. Since we began this project, we have seen a tidal wave of media attention celebrating the “wonder years,” with peppy stories about seniors who sky dive or run marathons. While these stories are inspirational, they do not address the real concerns of growing old that most Americans will face. In fact, they contribute to the “anti-aging” sentiment that is bent on defying this natural process. While examining some of the unprecedented opportunities facing elders, our project also explores the deterioration of body and mind. It is a sobering account of individuals fighting against time and of institutions contending with an aging society.

My ultimate goal is to create a living document that will contribute to our understanding of aging, and provide a clear-eyed account of what has become an abstracted and over-hyped marketing tool. It will challenge American society’s marginalization of the elderly by boldly illustrating how seniors are vital contributors to our families and communities. This project will help visualize the emerging issues of an aging society in order to help us prepare and adapt more successfully.