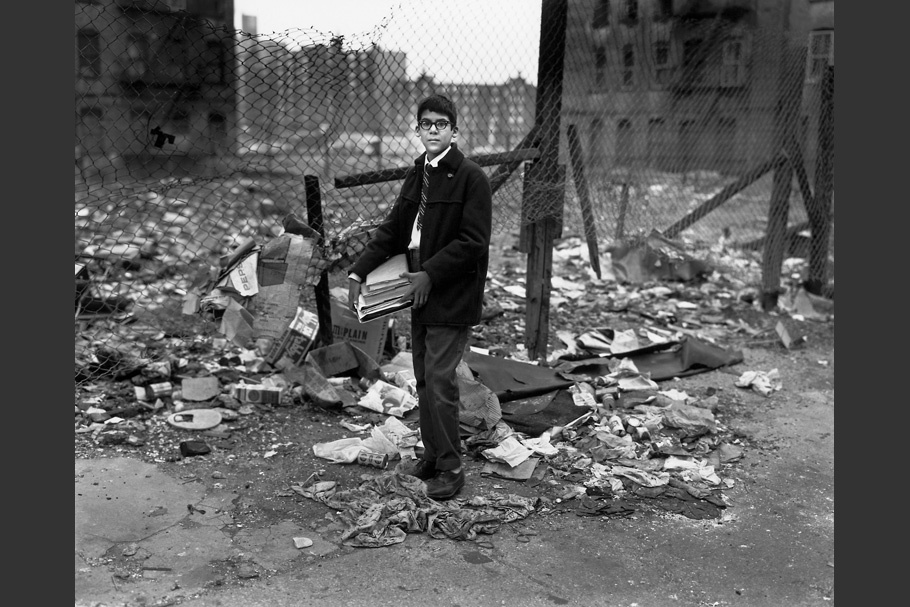 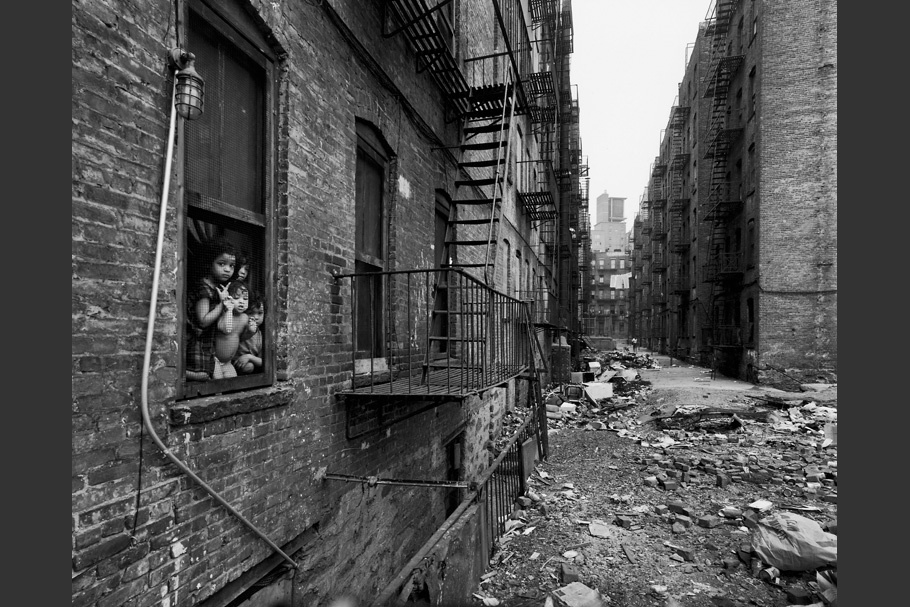 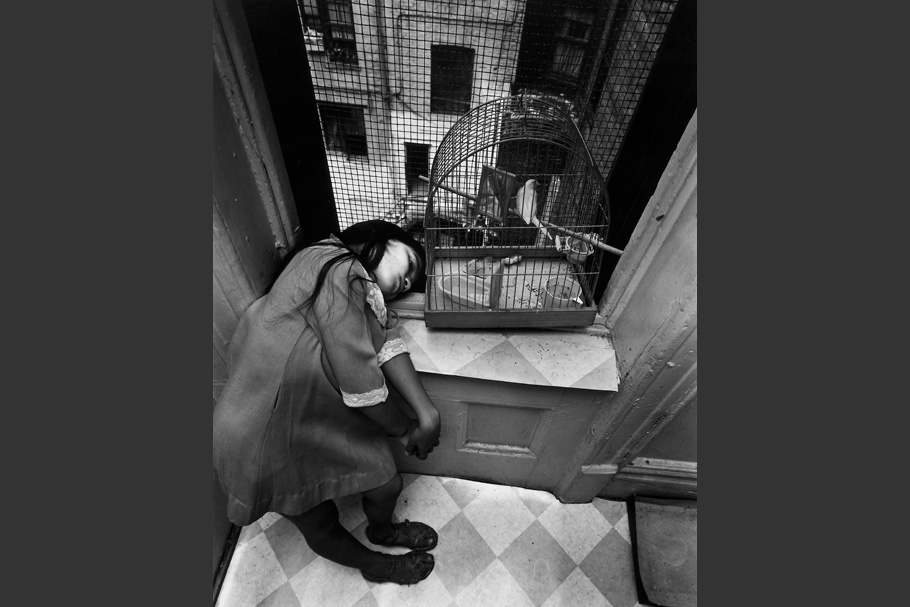 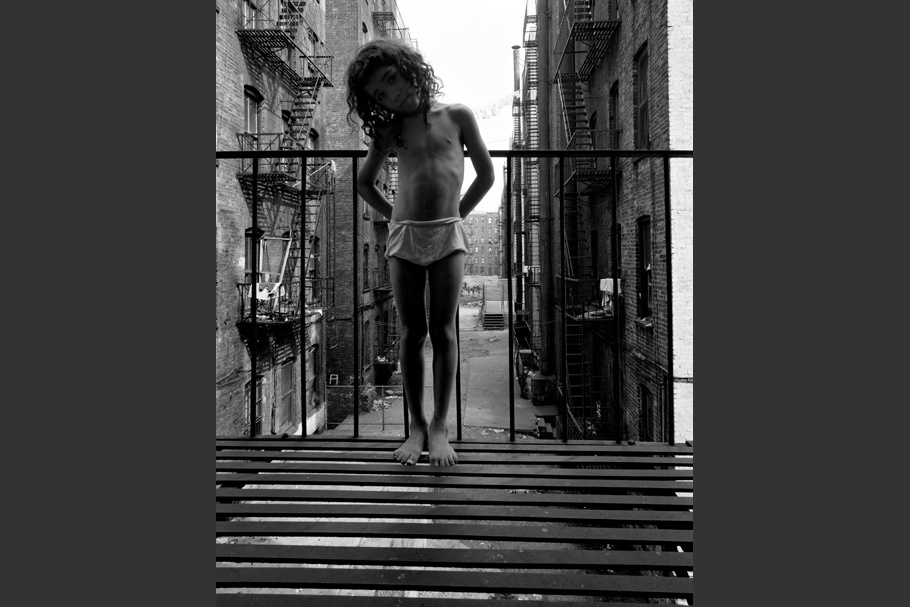 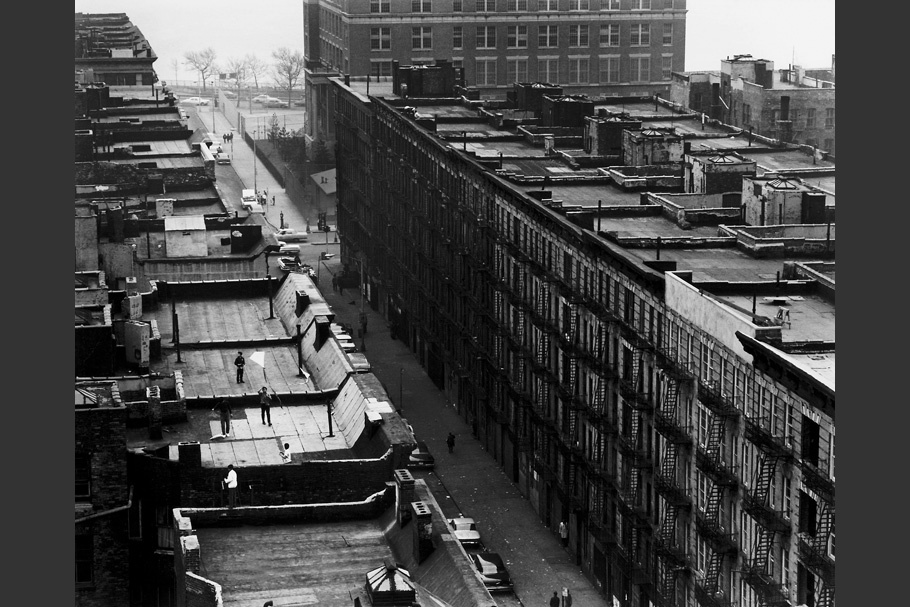 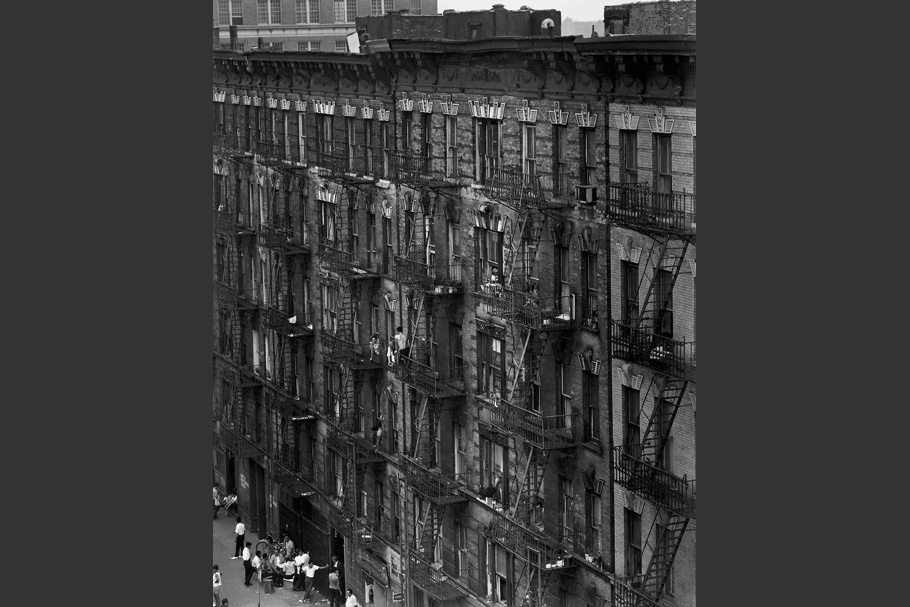 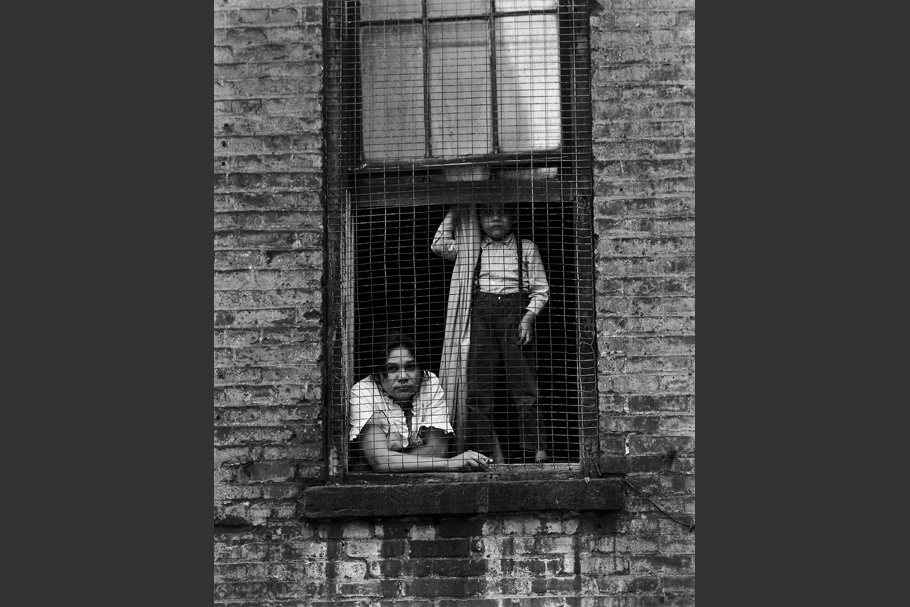 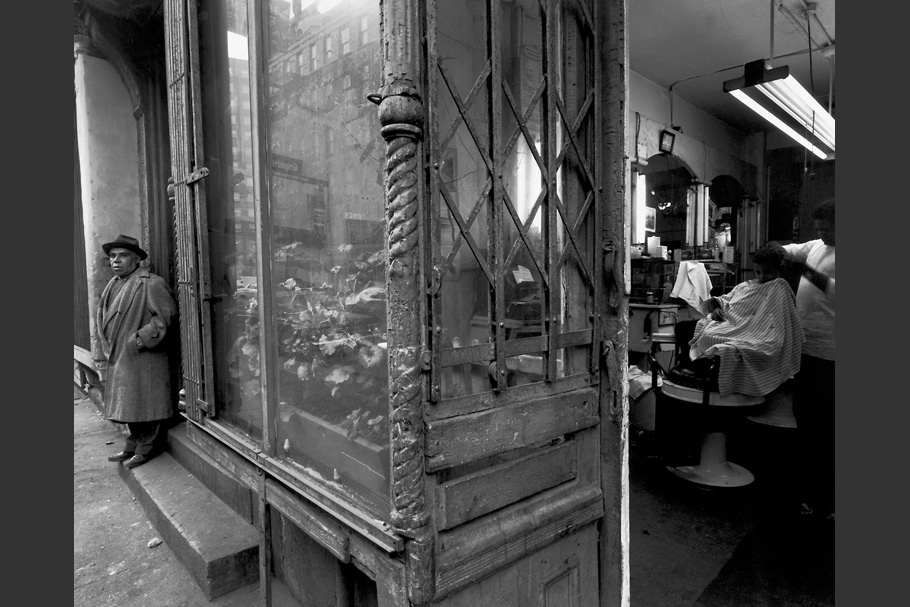 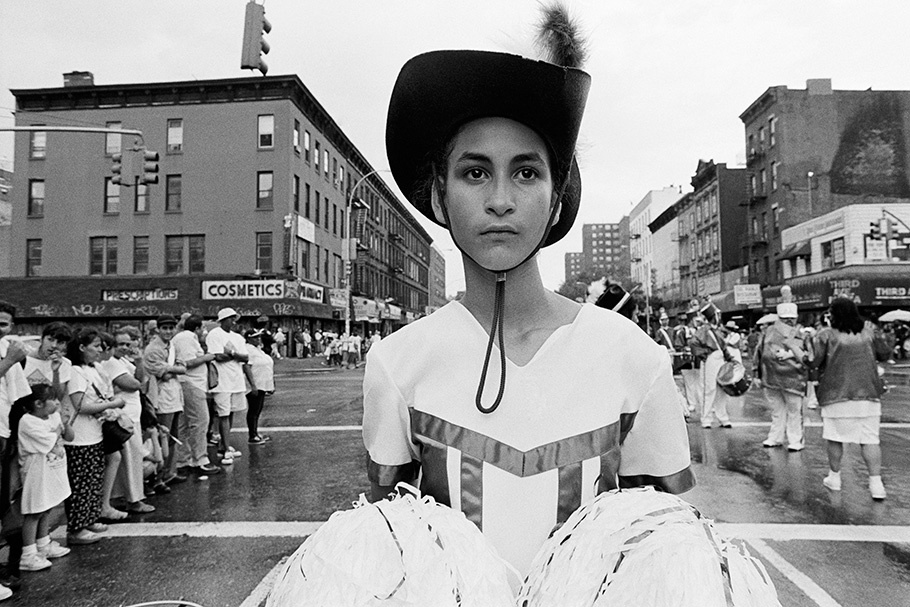 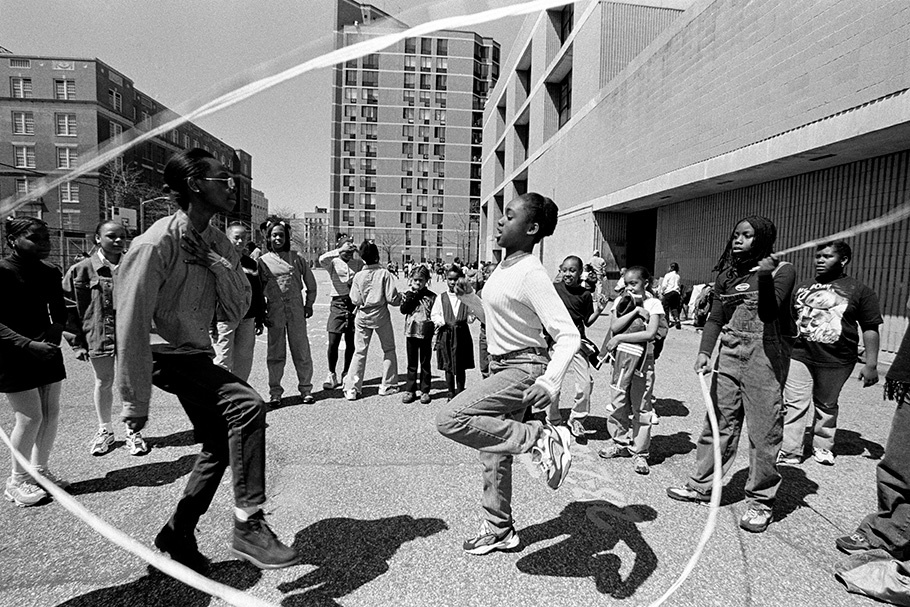 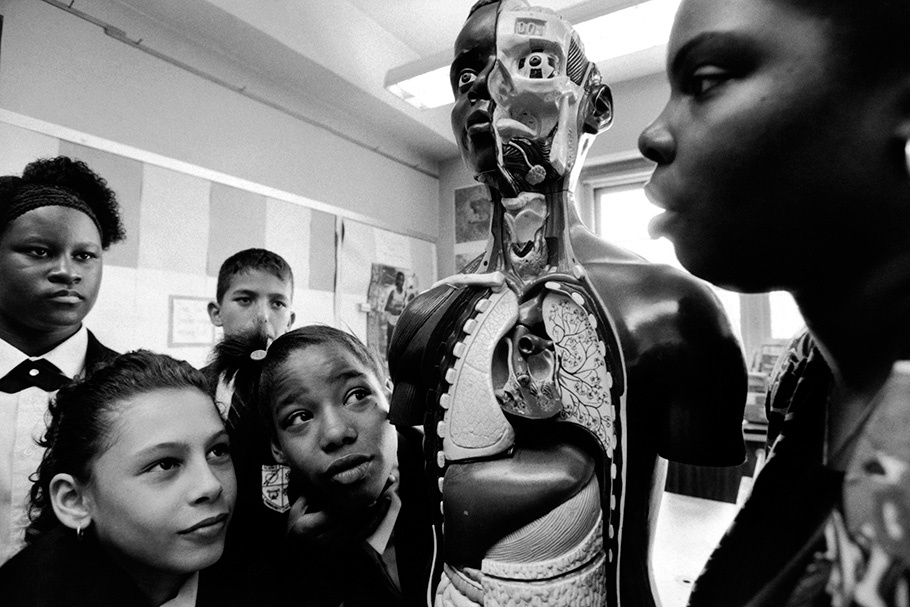 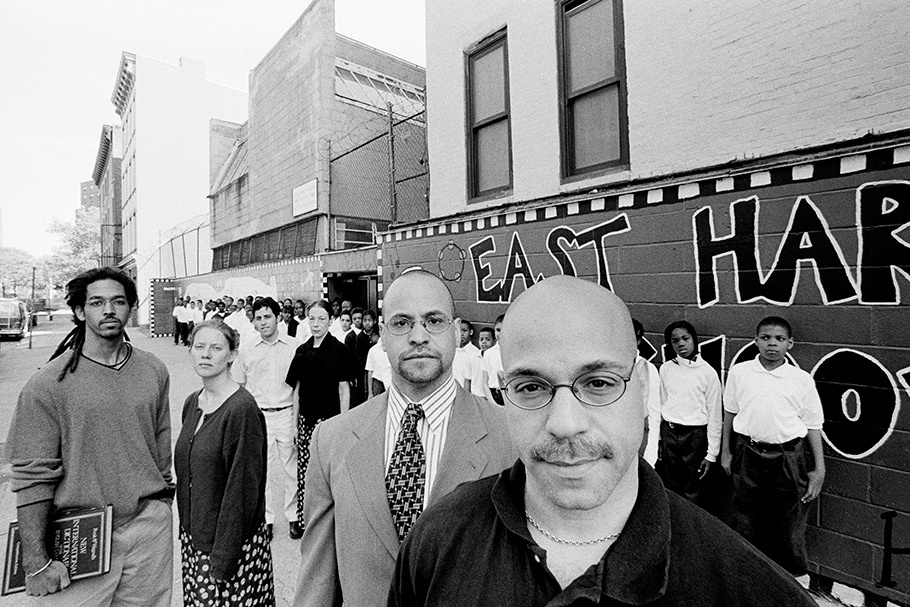 Hans Hageman, executive director, and Ivan Hageman, principal, with faculty and students outside of the East Harlem School. New York. 1998. 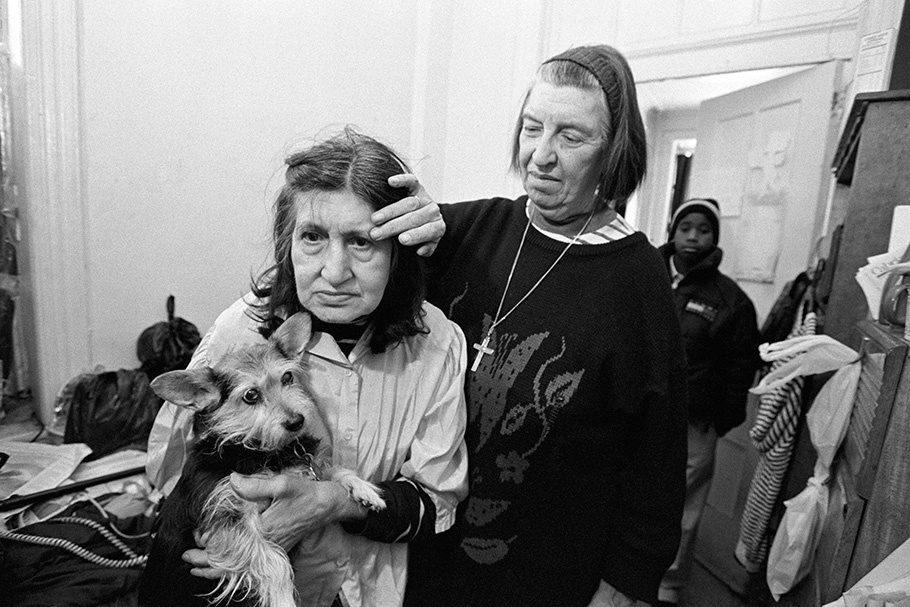 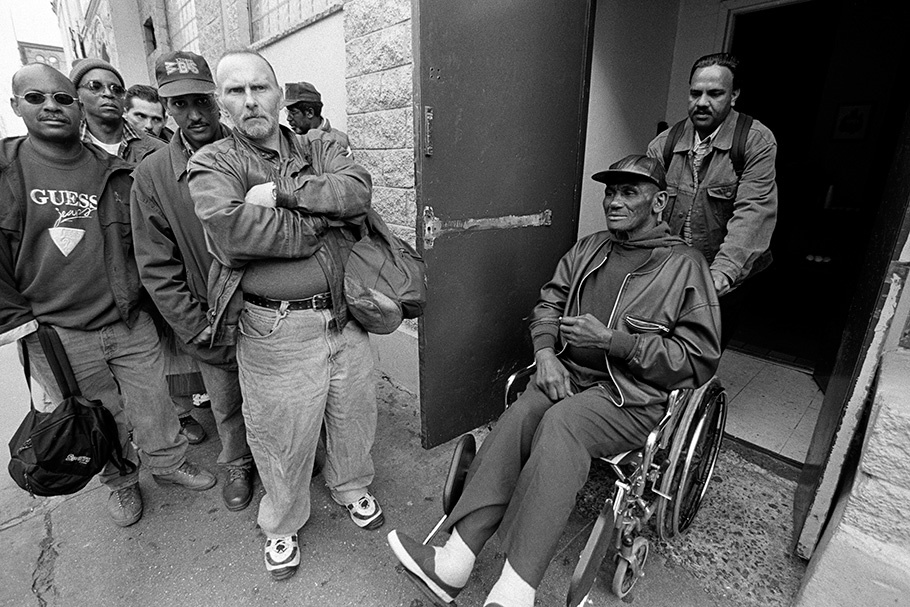 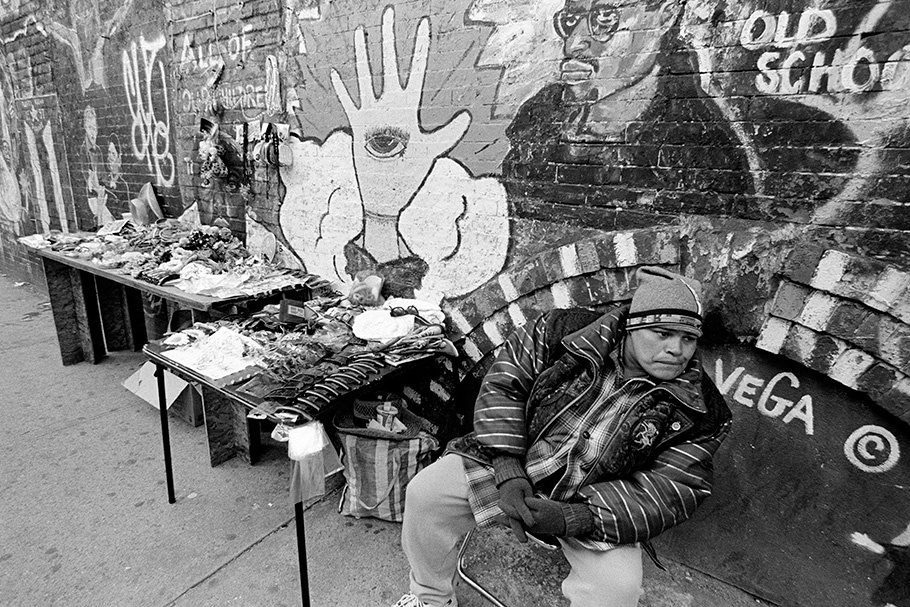 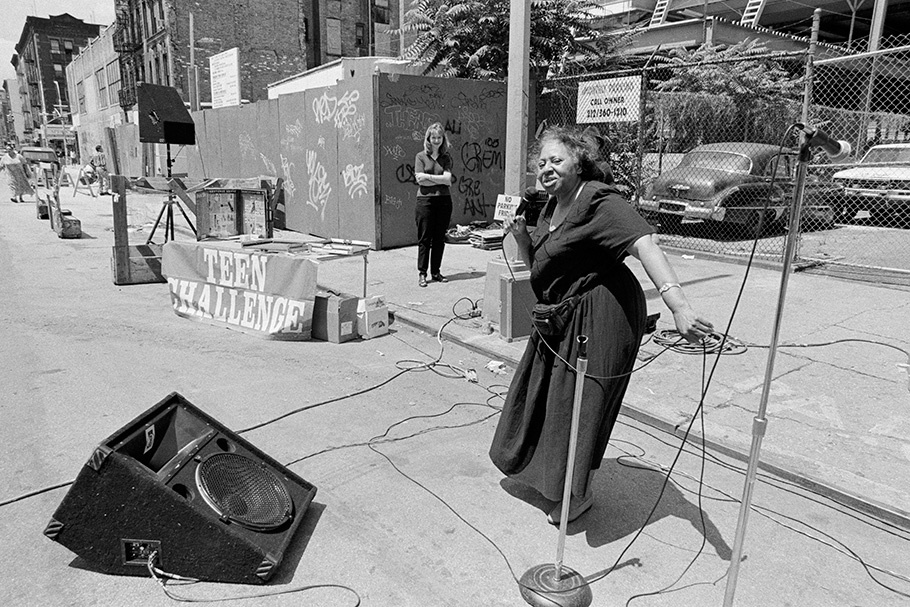 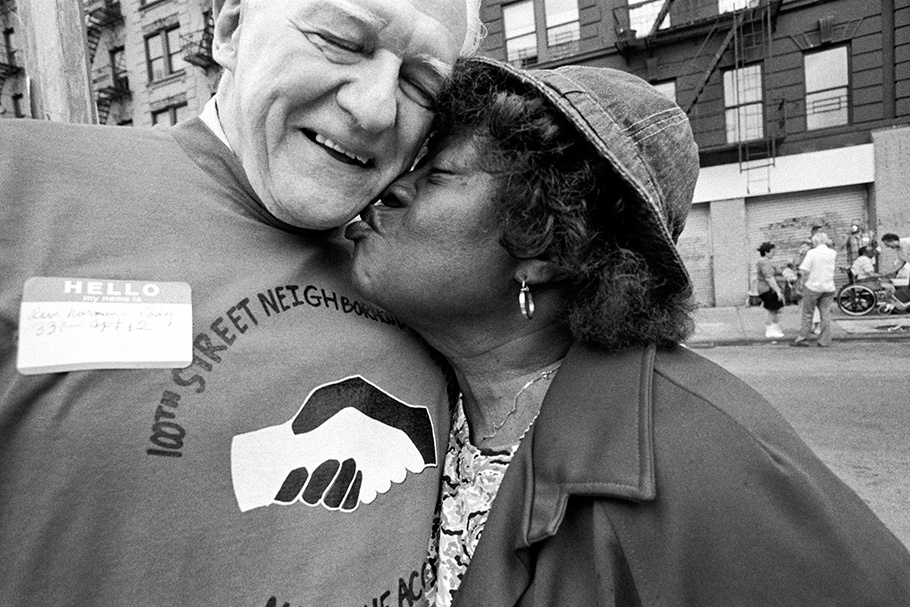 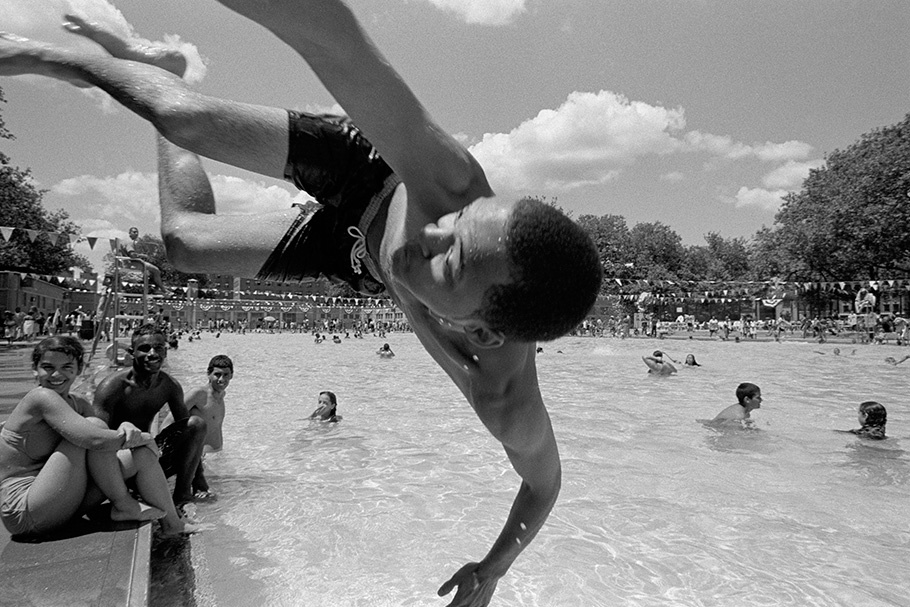 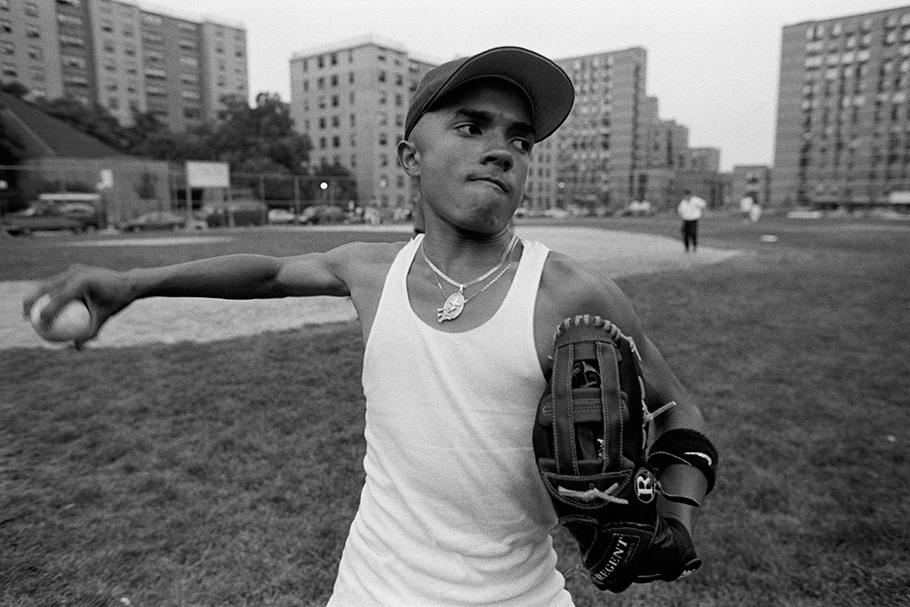 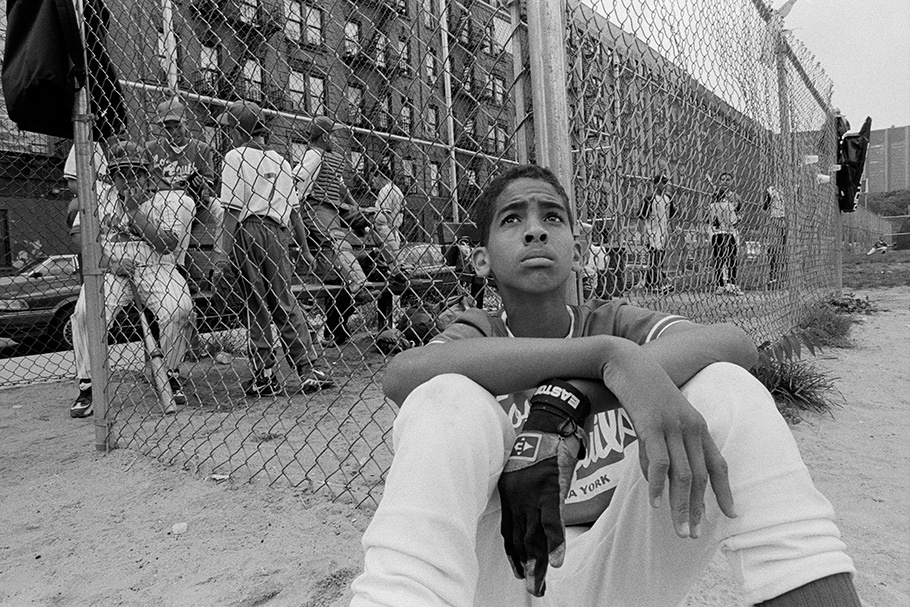 Bruce Davidson’s photographs are intimate, empathetic, and lyrical testimonies of individuals and groups. Born in 1933, he began photography at the age of ten in Oak Park, Illinois. He attended the Rochester Institute of Technology and Yale University. After military service in 1957, he photographed for Life magazine and, in 1958, joined Magnum Photos, the international agency owned by its member photographers. In 1962, he received a Guggenheim Fellowship to document the civil rights movement.

In 1963, the Museum of Modern Art gave him a solo exhibition that included the photo series The Dwarf, Brooklyn Gang, and photographs from his Guggenheim Fellowship. He received the first photography grant from the National Endowment for the Arts in 1967 to continue the documentation of one block in East Harlem, East 100th Street. These photographs became a major exhibition at the Museum of Modern Art and a Harvard University Press book.

Davidson is also a filmmaker. His documentary Living off the Land also received a Critics’ Award from the American Film Institute, and he directed Isaac Singer’s Nightmare and Mrs. Pupko’s Beard, which won first prize in fiction at the American Film Festival. He is the author of several books including: East 100th Street (1970), Bruce Davidson Photographs (1978), Subway (1986), Central Park (1996), Brooklyn Gang (1998), and Portraits (1999).

He received an Open Society Foundations Individual Project Fellowship in 1998, and returned to East Harlem, after more than 30 years, to explore the positive changes in the community. Davidson is an active photographer, working on assignments around the world. His work is shown in private collections, galleries, and museums internationally.

In 1966, I began to photograph one block in East Harlem: East 100th Street, also known as El Barrio. I met with the local citizens committee, Metro North, to obtain their permission. At that time, they were in the early stages of community rehabilitation and revival. I observed abysmal housing conditions, abandonment, abuse, and degradation. The committee slowly opened their doors to me and I began to accumulate a visual testimony of the neighborhood. At that point in history, we were sending rockets to outer space and conducting a war in Vietnam. There was a growing need to explore the space of our inner city and nurture the human potential there. I set out to document the people of 100th Street in an “eye to eye” relationship using a large bellows camera on a heavy tripod. The presence of the view camera made me visible to the community and necessitated mutual participation, which I felt gave dignity to the act of photography. It also allowed me to reveal the details of people’s surroundings, thus making environmental portraits. As I entered the sanctity of homes and the privacy of loves, people presented a formal composure and that sense of stillness inspired me. I attempted to give everyone a print as both a memento and as a mirror reflecting on to other projects. During the years that followed, I remained in contact with the community.

Thirty-five years-later, I returned to East 100th Street to see immense changes that had taken place in the community. Where rubble and broken down buildings once stood, I now would look into a square block of open green space consisting of ball fields, a learning center module with a dozen computers, and a vegetable garden for children. New housing and a public school edge this park. All the tenement buildings on one side of East 100th Street have been refurbished and new families are living there. Very few of the old residents remain.

I soon realized that the mood of East Harlem had changed in a positive direction. I wanted to uncover this vitality with a looser, more informal approach. There are individuals and institutions all over East Harlem working to benefit the community. What began as storefront community action groups have become what Reverend Norman Eddy, a long time East Harlem resident and activist, calls “fireflies of the spirit” that are lighting the way to self-empowerment. Some of these “fireflies” are: Reviving Baseball in the Inner City (RBI), headquartered on East 100th Street, which mentors youth and fosters community consciousness through baseball; the East Harlem School at Exodus House, which teaches children with the motto “Competence and Character”; and Father Kirk, founder and minister of Emmaus House, which is a community run by homeless men and women working and living together, helping themselves while caring for those still on the streets. While adversity and struggle still exists, I found myself charged with the mission and the responsibility to document sources of progress and possibility. Like the “fireflies,” these images illuminate movement and spontaneity, which reflect the hope and presence of change.