The Ferghana Valley: The Troubled Heart of Asia 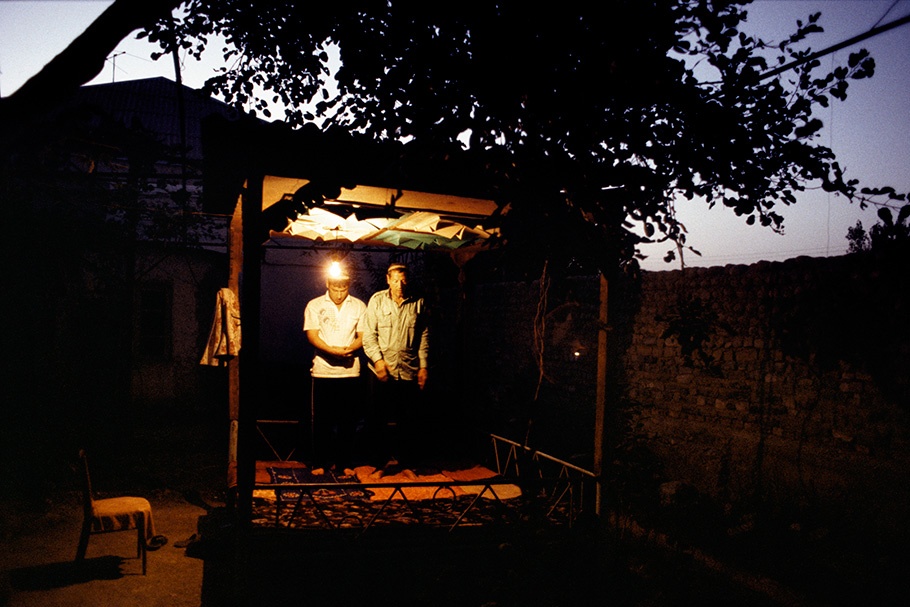 A father and son in Margilan, Uzbekistan, pray quietly in their backyard. Three members of their family are in jail for unsanctioned religious activity. 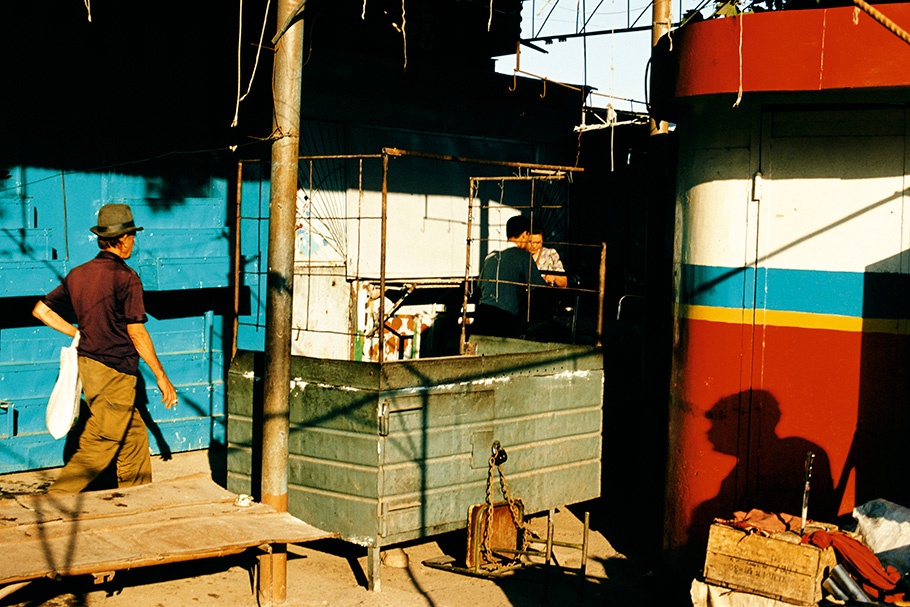 A man walks through a run-down marketplace in Osh, Kyrgyzstan. 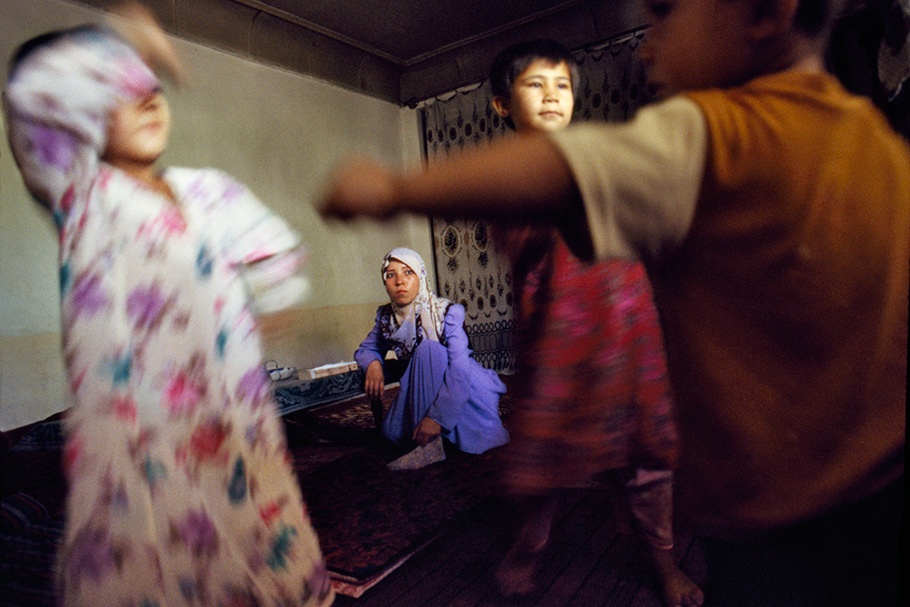 Children play in a house in Margilan, Uzbekistan. All but one of the men in their extended family are serving long-term jail sentences for religious affiliations. 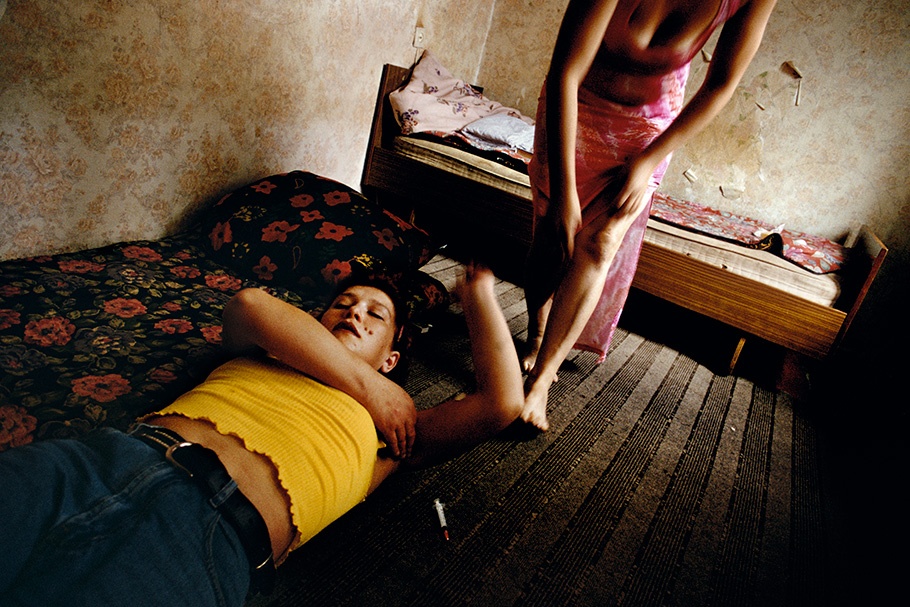 In Osh, Kyrgyzstan, addicts inject heroin. Drug use is on the rise in the valley, which sits on the main drug-trafficking route from Afghanistan (where most of the world's opium is produced) to Western Europe. 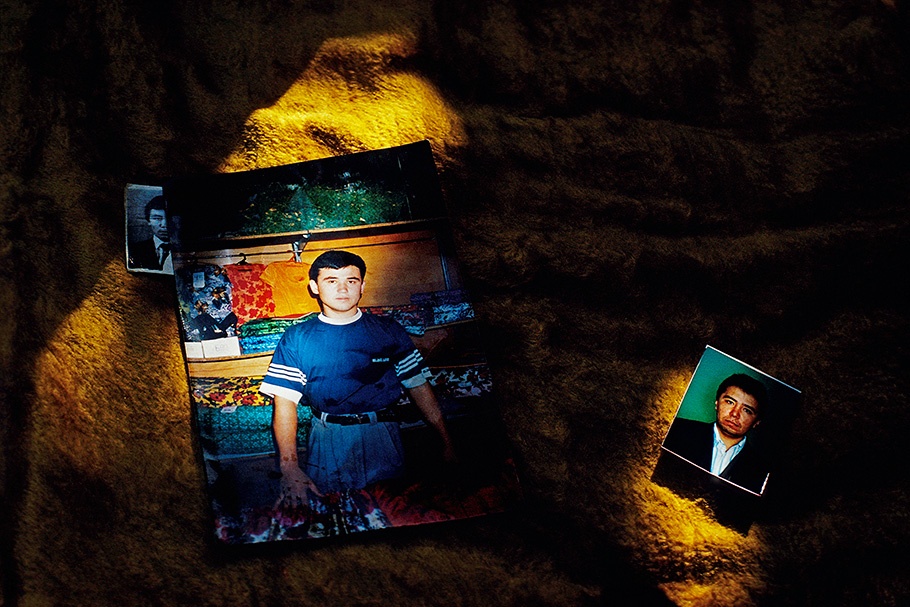 The government crackdown on Islam has led to questions about human rights violations in places such as Margilan, Uzbekistan. Relatives of the young man in the large photograph believe he was killed as a result of police torture. The men in the other photographs are in prison. 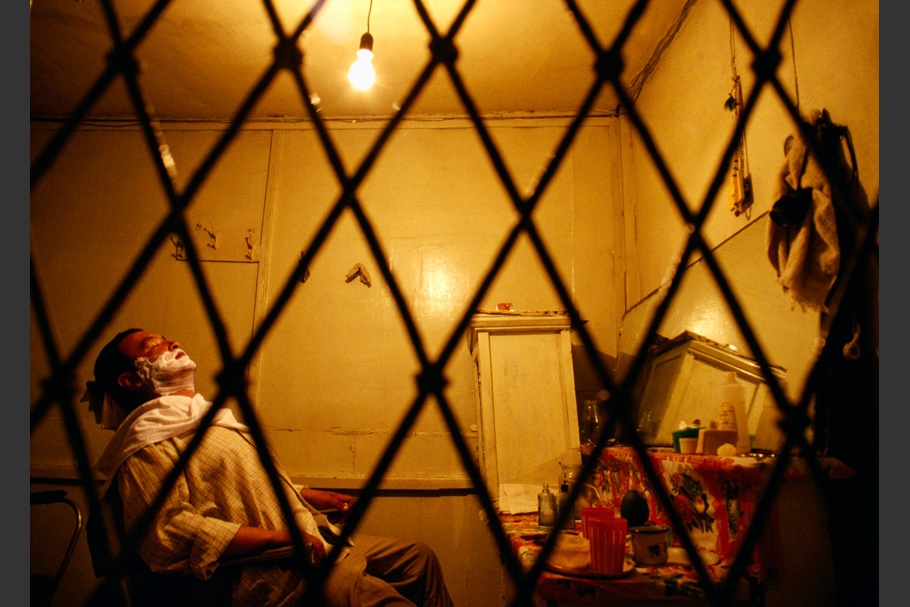 A man gets a shave at a barbershop in Margilan, Uzbekistan. Uzbekistan is a nearly beardless society, as facial hair often labels one as an Islamic extremist in the eyes of the government. 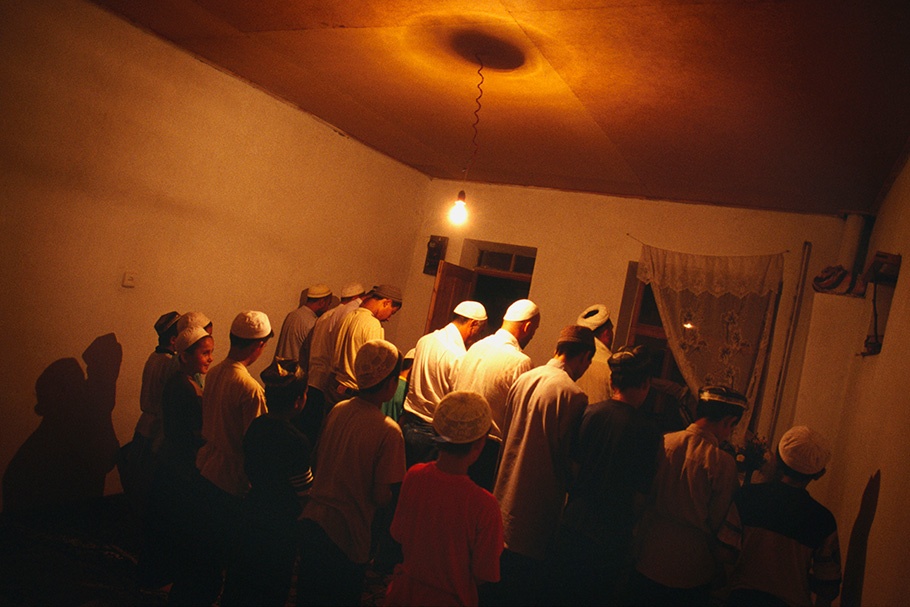 At an underground mosque in Margilan, Uzbekistan, Muslims hold prayer services in secret. All religious activity not sanctioned by the government—such as gathering for prayer or religious study—is considered a crime in today’s Uzbekistan. 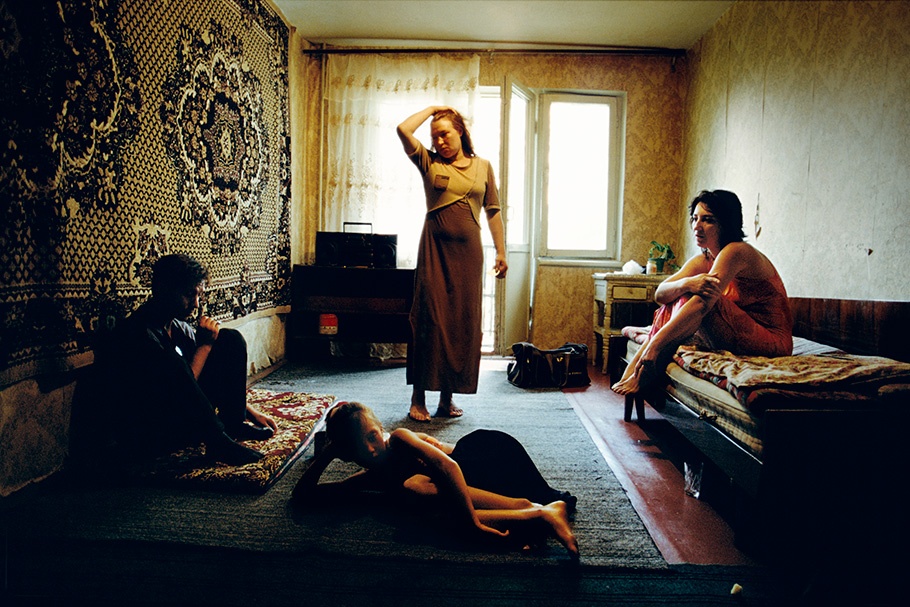 Heroin addicts in Osh, Kyrgyzstan are a part of society increasingly at odds with religious Muslims. 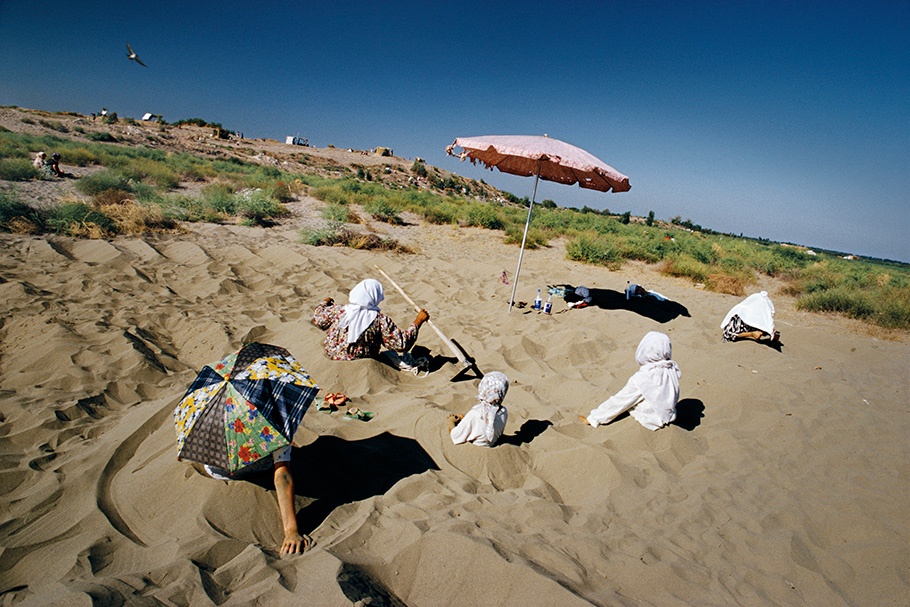 Muslim women dig themselves into the sand in Zyl-Kha, Uzbekistan. A popular destination spot in the Ferghana Valley, the Zyl-Kha sands are believed to have healing powers. 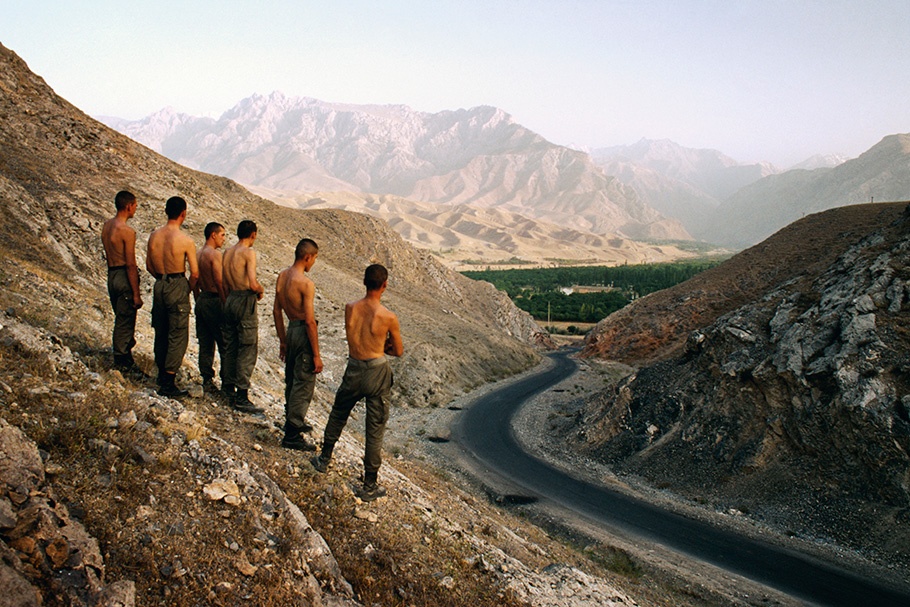 On the border between Uzbekistan and Kyrgyzstan, Uzbek guards survey the entrance to Sokh, one of the valley’s seven territorial enclaves.

Jonas Bendiksen is a magazine photographer based in New York City. Born in Norway in 1977, he moved to Russia in 1998 and lived in that country for two years while pursuing stories that lay outside the general news beat.

Bendiksen, who has studied Russian and Arabic, continues to photograph the former Soviet Union and Central Asia as well as the Middle East. His photo essays appear in many international publications, including The Sunday Times Magazine (London), GEO, Newsweek, and Mother Jones.

He was awarded the 2002 Nikon/Sunday Times Magazine Ian Parry Memorial Award, the 2003 Infinity Award from the International Center of Photography, and first prize in the University of Missouri’s 2003 Pictures of the Year awards.

These photographs explore some of the most crucial issues facing former Soviet Central Asia, viewed through the prism of its most fertile and populous region, the Ferghana Valley.

Central Asia, portrayed either as a war zone or an exotic destination for adventuresome travelers, has long fascinated me. With this project I set out to find another Central Asia, one still searching for its post-Soviet identity. The former USSR, once considered a utopia by some and the Evil Empire by others, has always been enigmatic to outsiders. The Ferghana Valley, shared by Uzbekistan, Tajikistan, and Kyrgyzstan, is a crossroads between old and new myths.

The division of the valley among the three countries, a result of Joseph Stalin’s gerrymandering, is impractical in a postcommunist Central Asia. Borders, once fluid, are now difficult to cross and rife with tension.

After the fall of communism, most of the valley’s people turned back to their Muslim roots. Governments reacted differently to the new political force of Islam. Tajikistan endured a civil war before agreeing to power sharing with the Islamic party. Kyrgyzstan adopted a relatively liberal position toward the Islamic opposition.

In Uzbekistan, President Islam Karimov, fearing the rise of political Islam and extremist insurgents, reacted by repressing Islam as a whole. Today ordinary Muslim behavior such as praying in public, growing beards, or dressing in Islamic garb is likely to result in arrests, charges of extremism, and up to 18 years in prison. A United Nations special envoy recently reported that many of the 6,000 political and religious prisoners in Uzbekistan are the victims of the “systematic use of torture.” As a result, religion has been forced underground into the hands of two fundamentalist organizations that share a common goal: the creation of an Islamic state in the Ferghana Valley. While they receive their greatest support from the Uzbeks, these organizations also have a support base in the other countries of the valley.

The most popular of these forbidden organizations, the Hizb-ut-Tahrir, has become a refuge for the voiceless and the poor. Organized as a cell-based secret society, it claims to be nonviolent, but is labeled a terrorist group by the Uzbek government, the premier regional partner of the United States in the war against terrorism. However, to many of its members, the Hizb-ut-Tahrir offers the only way for them to live out their Muslim identity.

This climate of fear and confusion—who is the terrorist and who is the wrongfully arrested political prisoner?—is amplified by the valley’s numerous other problems. The economy has deteriorated under the weight of plummeting cotton prices. Border and ethnic disputes continue to erupt. And the drug trade is flourishing, with the cities of the Ferghana Valley serving as hubs for smugglers from Afghanistan and Pakistan on their way to Russia and Europe.

The problems of the Ferghana Valley and what they reveal about Central Asia remain too perilous for the rest of the world to ignore.