The Freedom of Movement Train: A Multiethnic Kosovo/a Journey 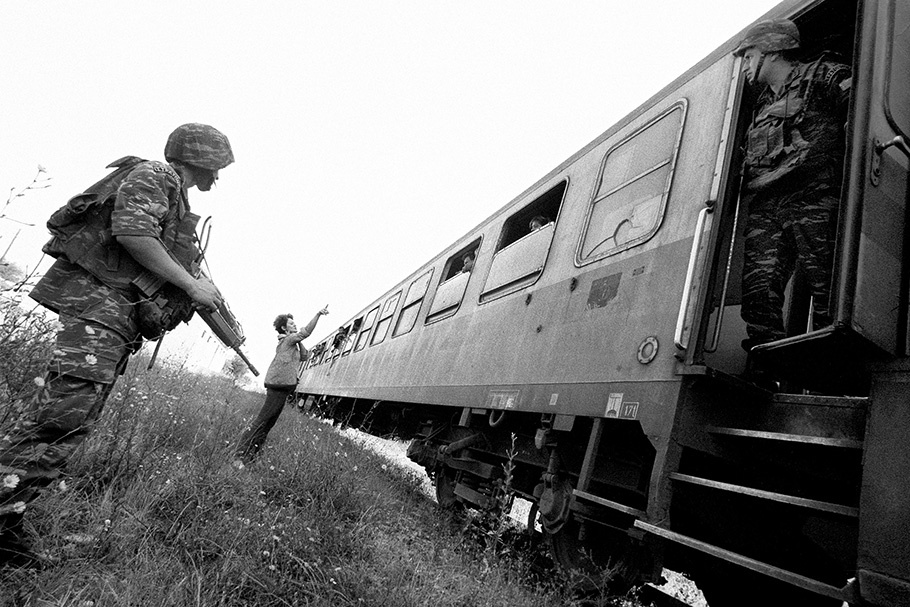 Greek soldiers with the NATO-led Kosovo Force [KFOR] patrol the platform as a Serbian woman waves goodbye to her husband and brother. 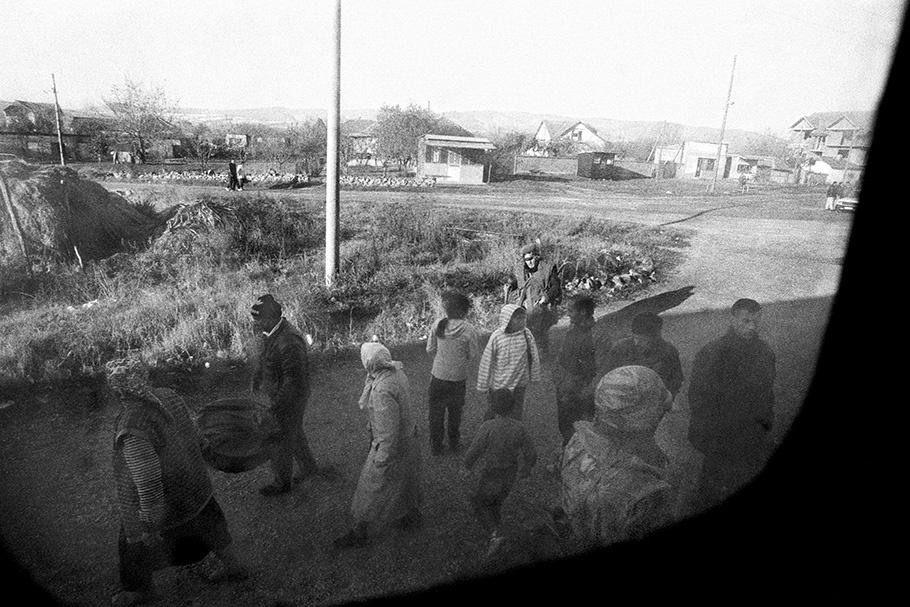 Albanian passengers prepare to board the train at a station near Vucitrn to go to Mitrovica and Zvecan in the north of Kosovo. 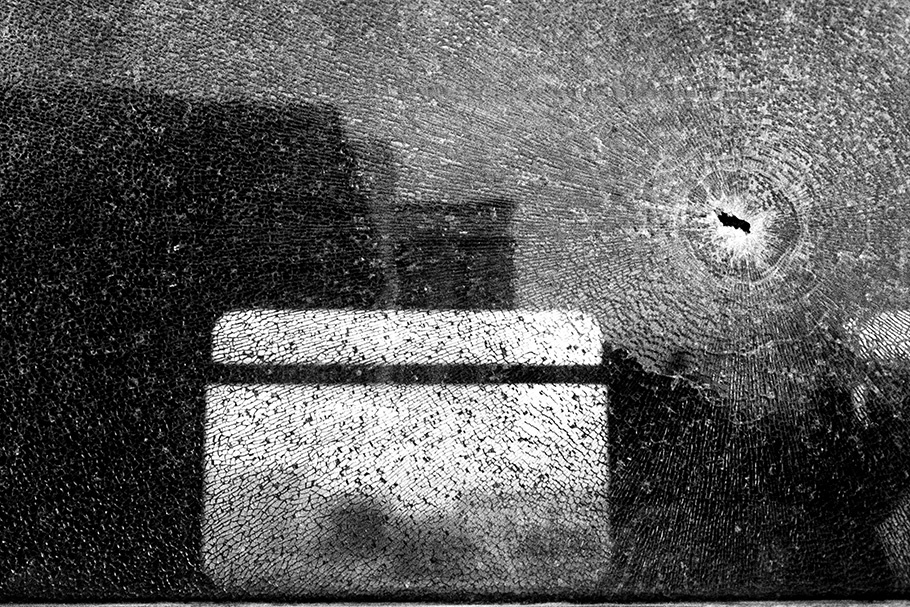 Despite security measures, the train's windows have been repeatedly shattered by Albanian bullets and stones. Attempts by NATO-led Kosovo Force (KFOR) to employ Albanian conductors provoked similar shooting and stoning by the Serbs. 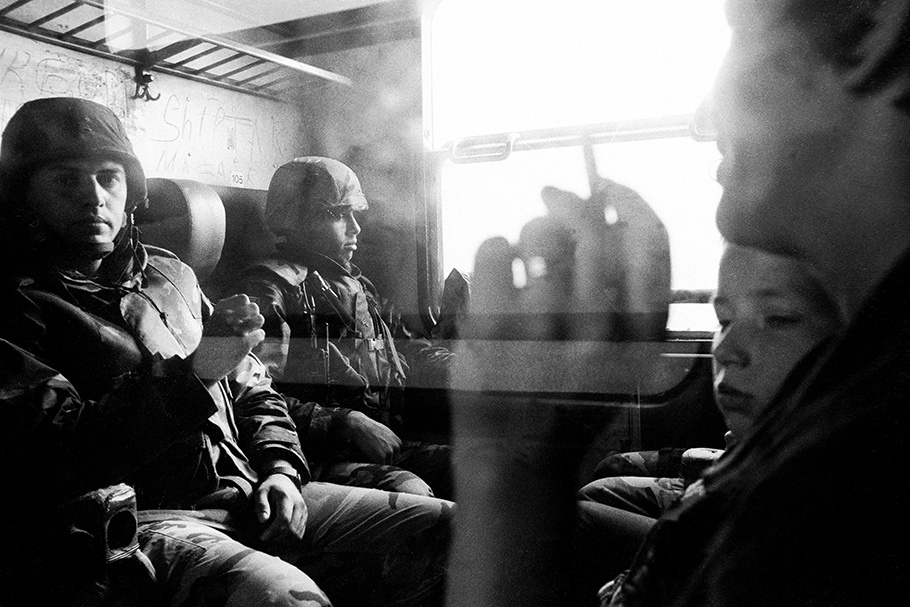 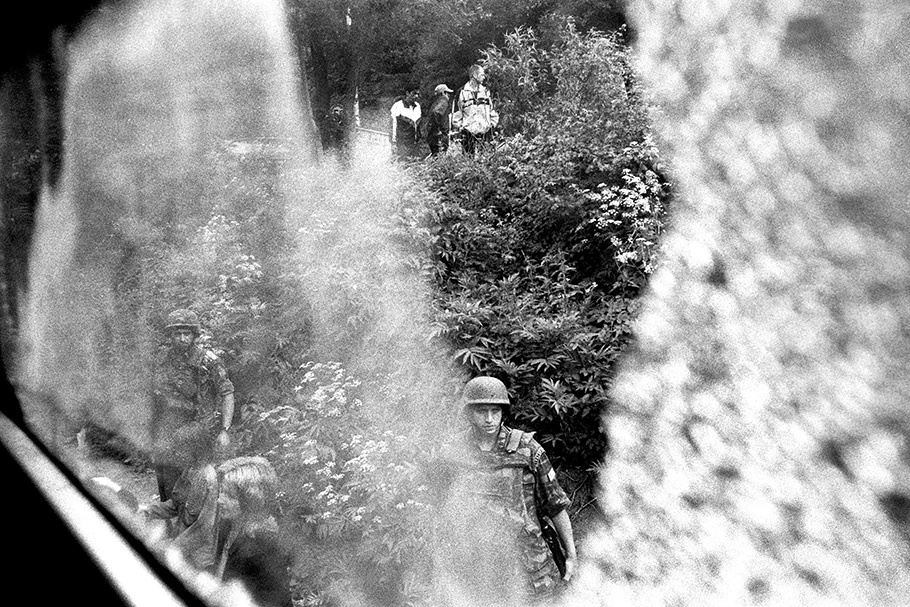 Kosovo Force (KFOR) soldiers check the platform at the station in Zvecan as Serbian passengers disembark and others board the train. 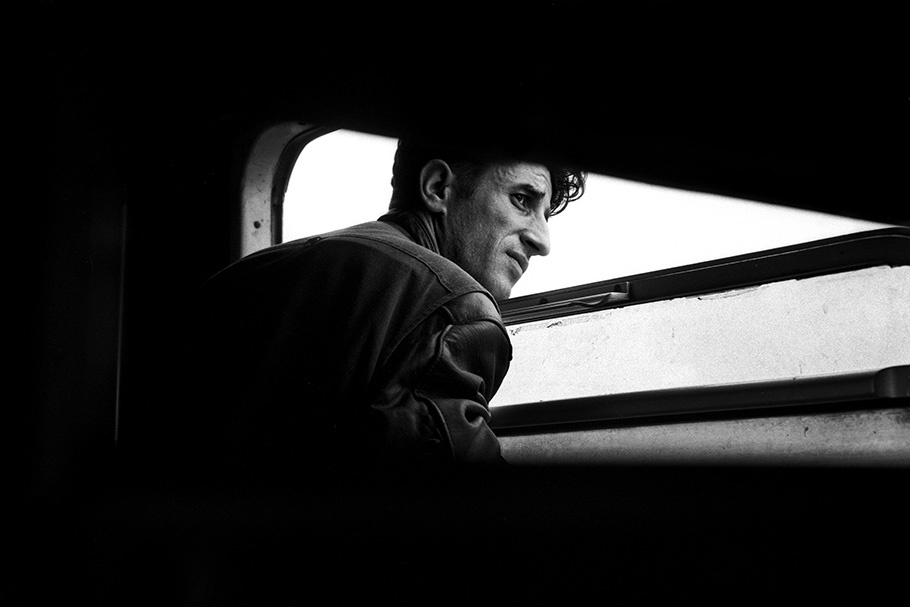 A Serbian man anxiously surveys the scene outside the train. 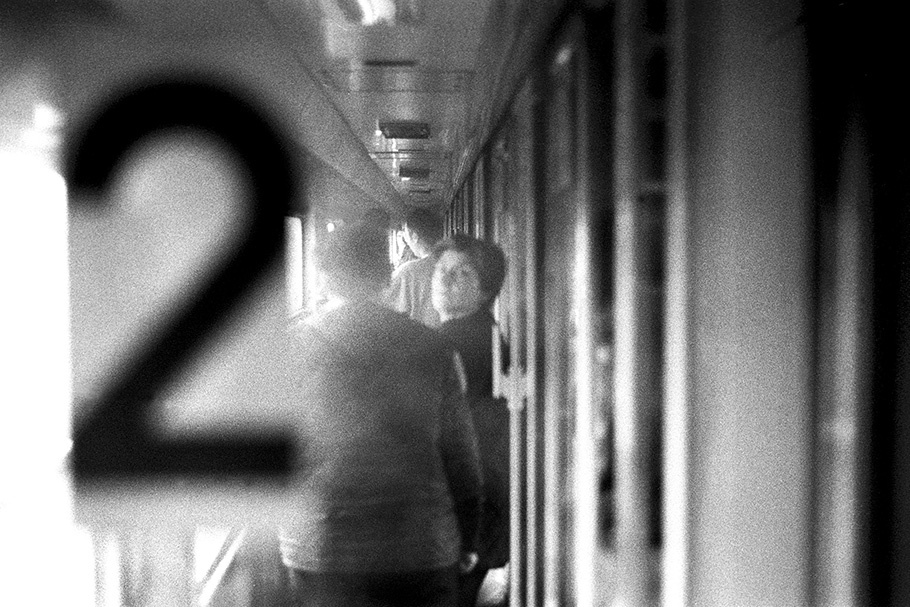 Passengers look for seats in a second-class carriage.

Hélène Caux is an independent photojournalist based in New York City since 1994. Born in Amiens, France, she earned a master’s degree in American history from Sorbonne University and an advanced degree in journalism from Institut Pratique de Journalisme in Paris. She is presently working on two long-term photography projects: one on cross-dressing and gender representations in New York, the other on refugees in the United States.

Caux has combined humanitarian aid work and photography for the past nine years, traveling for UN agencies to West Africa and later the Balkans. In 1997, she was in Vukovar, Croatia, photographing the daily lives of Serbs, Croats, and Roma displaced by the Balkan wars. She moved to Kosovo/a in 1999 and collaborated with the UN High Commissioner for Refugees to produce two photo books: A Journey Home, depicting the exodus of Kosovo Albanians to Macedonia and Albania in 1998-99 as well as the daily lives of minority Serbs and Roma after the war; and Kosovar Women, a collection of images, about the role of women in rebuilding a peaceful and multiethnic society in Kosovo/a.

Caux’s photographs have appeared in the International Herald Tribune, New Scientist, Amnesty International Press Sweden, Medecins Sans Frontieres Kosovo reports, La Vie, and on the UN and UNHCR websites. Her work on refugees and women has been exhibited in several galleries in Kosovo/a.

I first arrived in Kosovo/a* in July 1999 to work with the UN High Commissioner for Refugees as an aid worker for a period of three months. I ended up staying three years. Months earlier, on March 24, NATO had begun a bombing campaign to stop the escalating atrocities inflicted on the Albanian population in Kosovo/a. Over 850,000 people, mostly Albanians, were brutally expelled from their homes by Serbian military and police, and spent months in refugee camps in Albania and Macedonia. In June, as the war ended, Albanians began to rush back to Kosovo/a. However, the enthusiasm for returning home quickly subsided as they found their houses destroyed, their shops mined, and family members massacred. Some bodies had been hidden in wells or buried in gardens; others had been fire-torched and what was left of them lay among the rubble of the houses. Death was everywhere, and so were feelings of revenge.

As I listened to the tragic testimonies of persecuted Albanians and watched their endless search for missing loved ones, I also witnessed another exodus. This time, it was Serbs and Roma who were fleeing, accused of having collaborated with the Serbian police and government. Those who decided to stay in Kosovo/a had to face both acts of retaliation by some vengeful Albanians and new restrictions on their freedom of movement.

In June 2000, the UN and the NATO Kosovo Force (KFOR) began running a train, later dubbed the “Freedom of Movement Train,” to allow Serbs and Roma to travel from Kosovo Polje, a town near the capital Pristina, to northern Kosovo/a. For the first time since the war ended, these minority groups had the chance to leave the enclaves where they were confined and travel to meet family members living in other parts of Kosovo/a, especially in the divided city of Mitrovica.

The train, though heavily guarded by KFOR soldiers and protected by tanks, was the target of stonings and occasional grenade attacks when passing through Albanian villages. Despite the danger, Serbs and Roma continued to use the train. Albanians began riding it as well, traveling in separate carriages. Now cars transporting Albanians were attacked when the train stopped in Serb villages.

In 2002, under the watchful eyes of KFOR soldiers and international police in each car and at each stop, the train began transporting people of all three ethnicities in mixed compartments, in striking contrast to the segregated reality of Kosovar daily life. Many attempts, both local and international, to rebuild a multiethnic Kosovo/a have ended in disappointment. Yet, after three years of traveling extensively through Kosovo/a and photographing the return of Albanians to their homes, the exhumations of mass graves of both Albanians and Serbs killed in the war, and the daily lives of isolated Serb and Roma communities, I see the train as one of the first steps toward reconciliation.

* In this statement, I have used the spelling Kosovo/a, Kosovo being the English/Serbian standard rendition, Kosova being the Albanian.