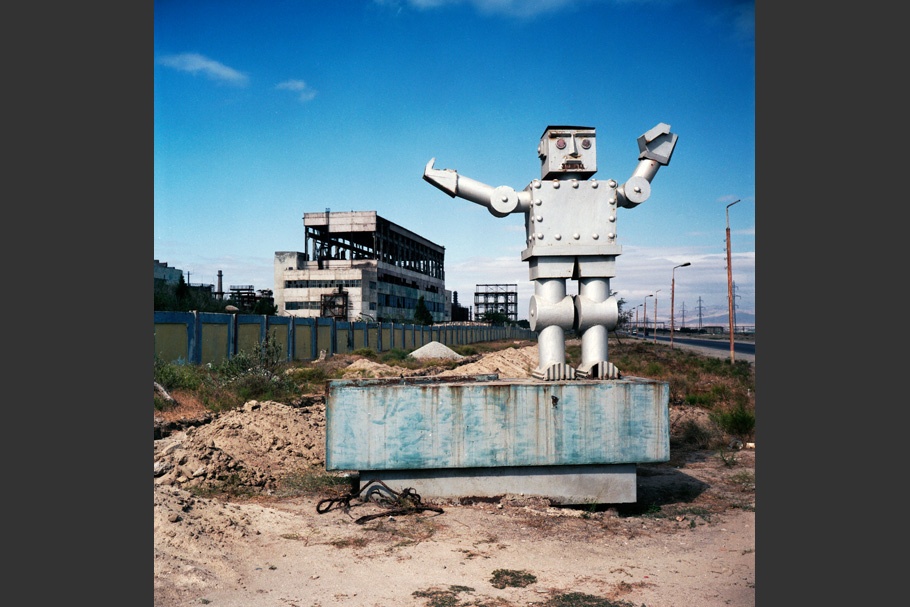 A robot statue outside a factory in Sumqayit, a former Soviet chemical production town and one of the most polluted places on earth. 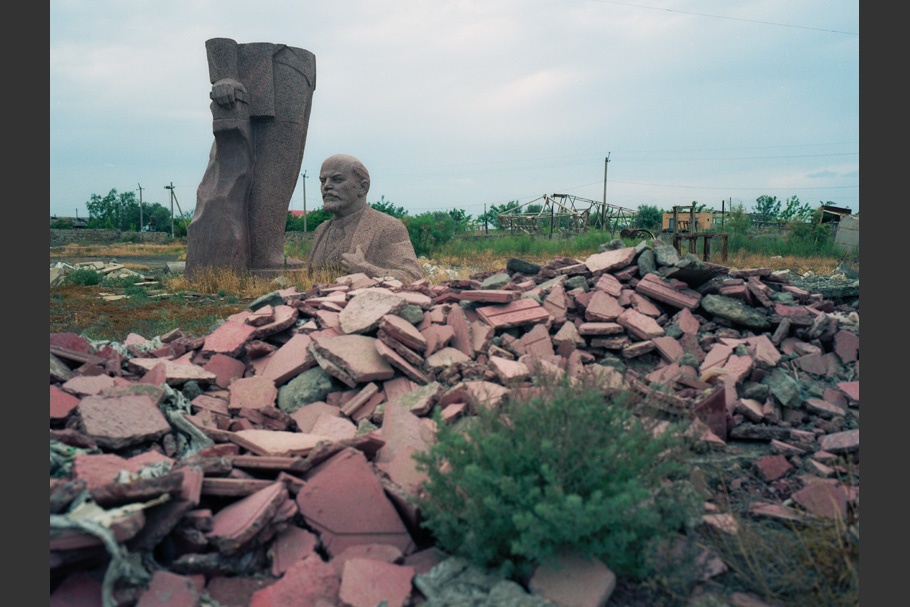 A statute of Lenin, broken in half, resting among the rubble in a field in Yevlax. The Azerbaijan government has destroyed most reminders of Soviet rule. 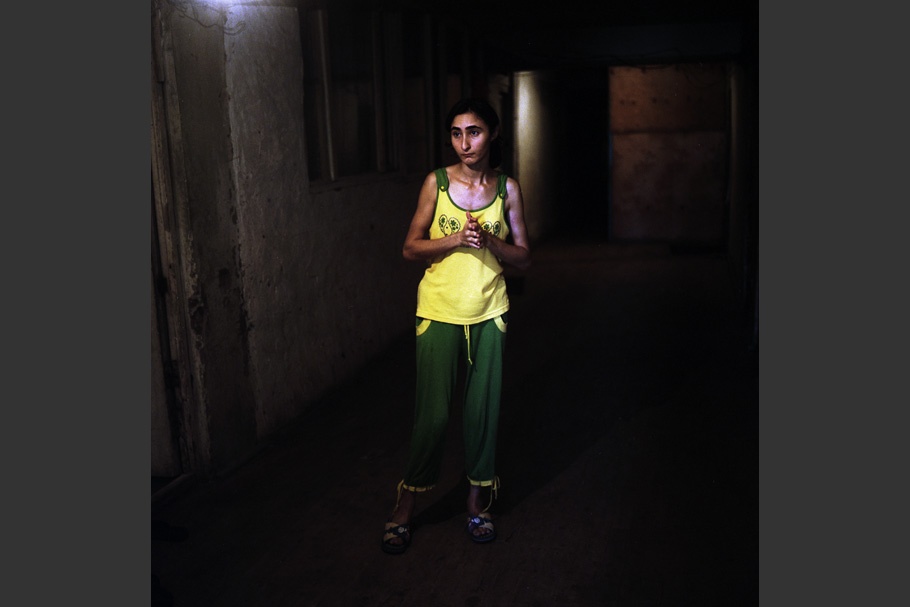 A young refugee from the war with Armenia in her apartment building, Baku. 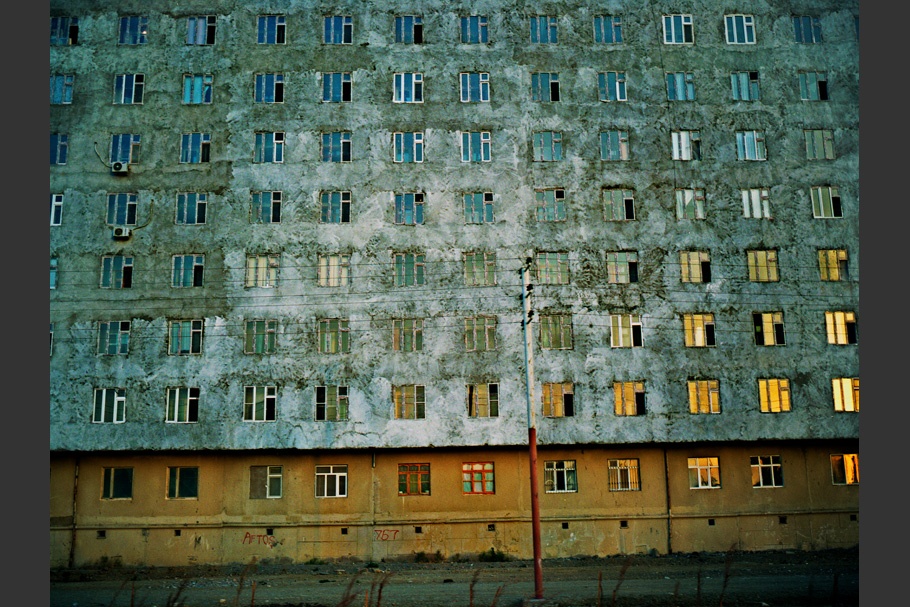 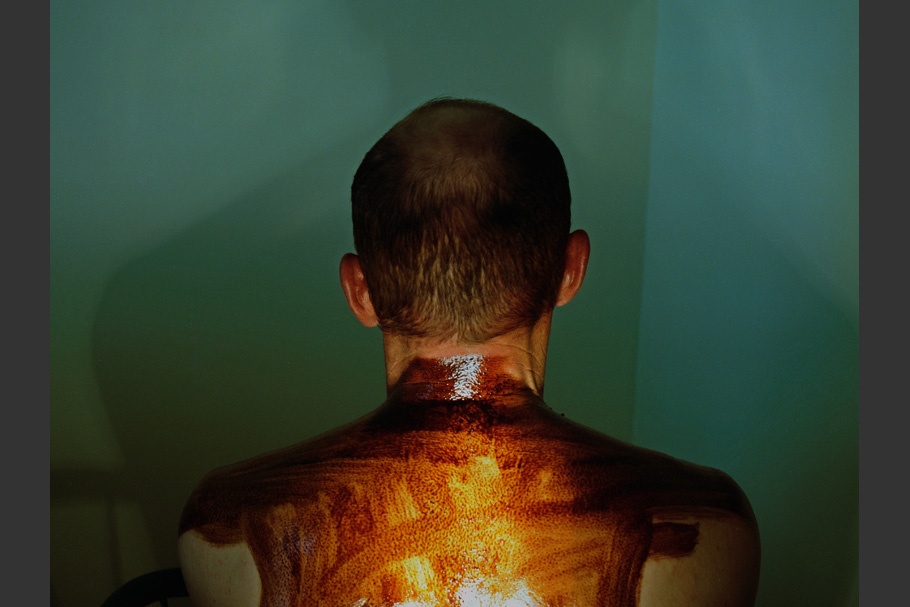 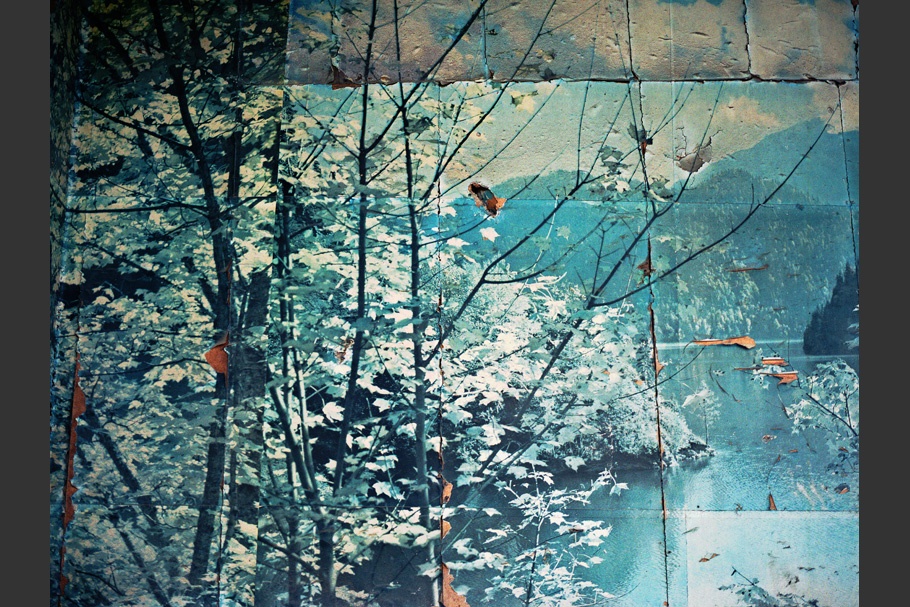 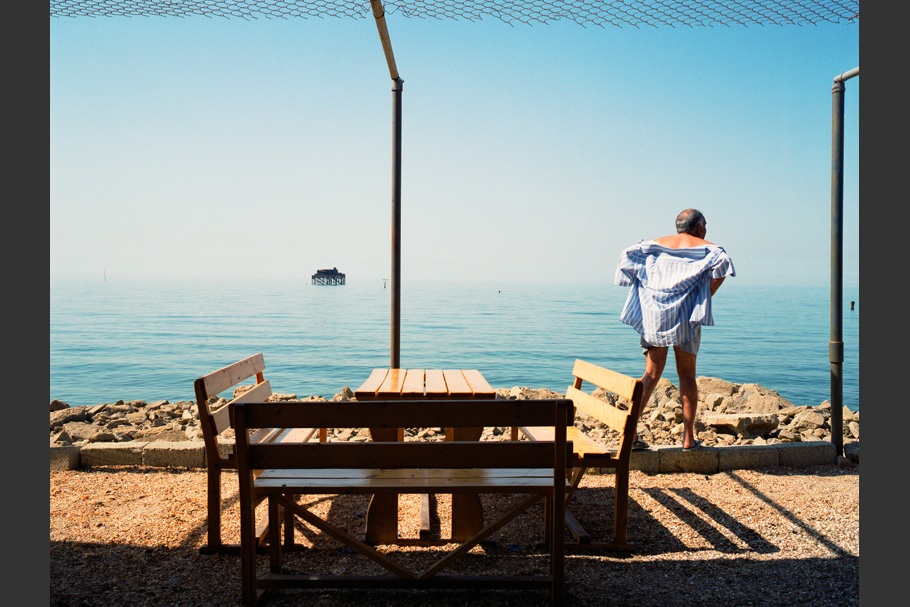 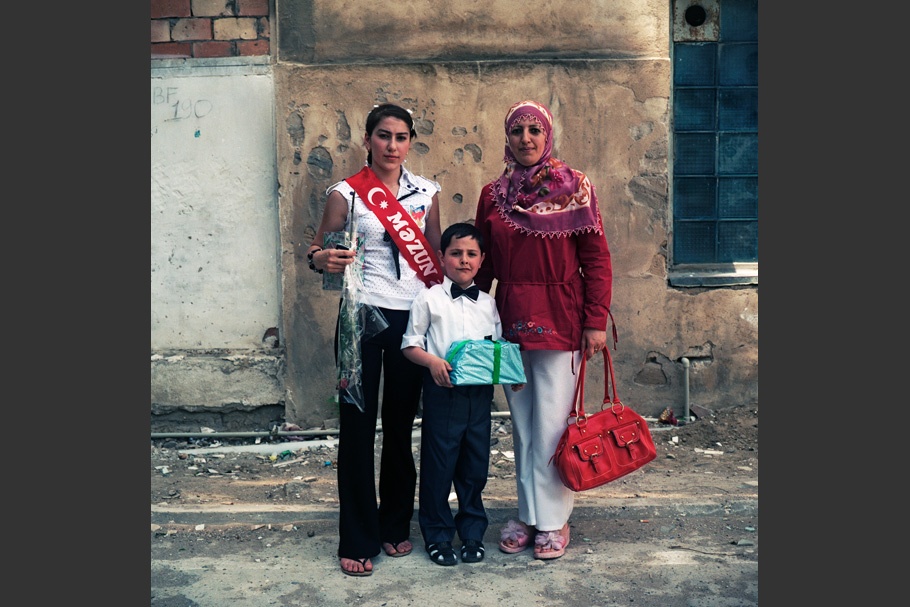 A high school student and her family, graduation day, Baku. 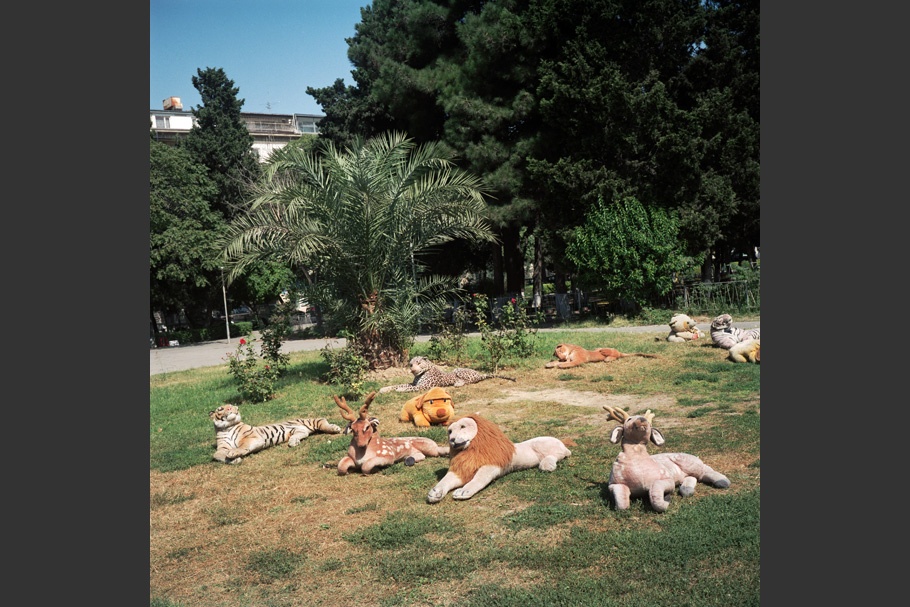 Stuffed animals waiting to be photographed for money on Baku's waterfront boulevard. 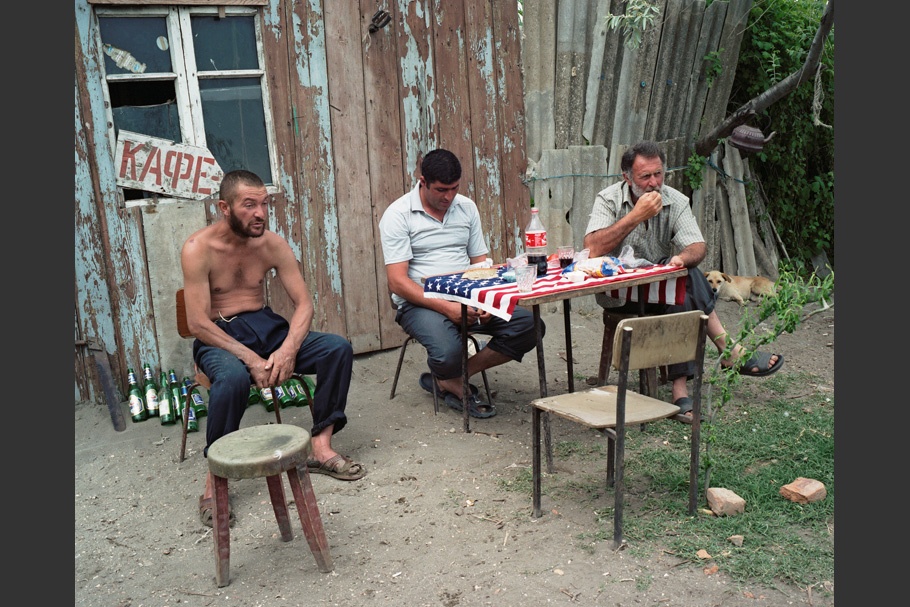 Fishermen with a U.S. flag they found in the Caspian Sea, Nabran. The fishermen think the diminishing size of their catches is caused by pollution. 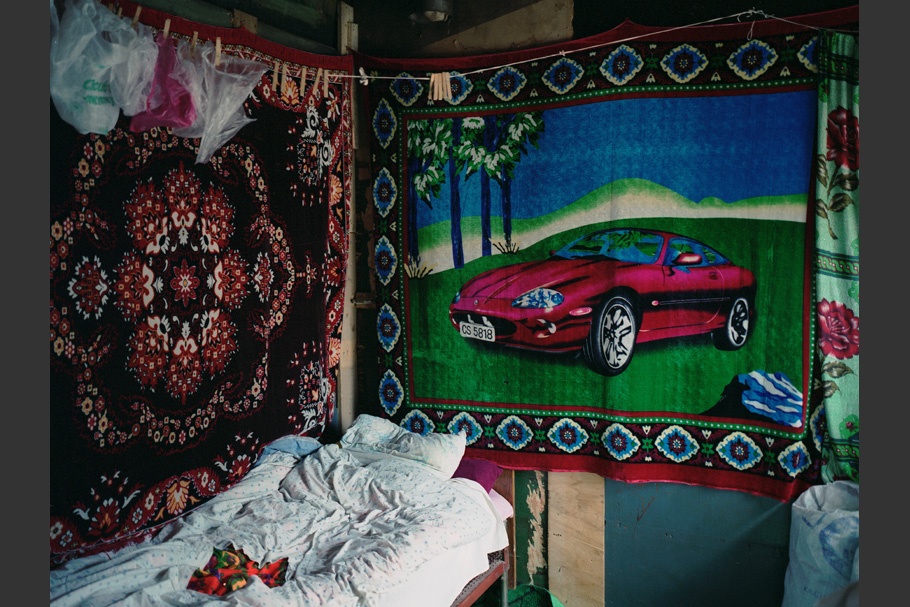 The inside of a railway car occupied for over a decade by refugees from the Armenian war, Absheron Peninsula.

After growing up in New York and London, James Pomerantz became interested in photography while attending New York City’s Columbia University, from which he graduated as a mathematics and philosophy major. Since then, his photographs have been published in numerous publications, including the New York Times, US News & World Report, Rolling Stone, Reader’s Digest, and L’Espresso. His work has been shown in London’s National Portrait Gallery, and his awards and recognitions include the Eddie Adams Workshop, Schweppes Portrait Competition, PDN Photo Annual, and World Press Joop Swart Masterclass.

Caspian Dreams is a portrait of Azerbaijan 16 years after independence. The photographs reveal a melancholy, dreamlike landscape as the country seeks to escape its Soviet past and move forward through the tidal forces of globalization and capitalism. Azerbaijan—sitting below Russia, above Iran, and between Georgia and Armenia to the west and the Caspian Sea to the east—is home to people with many languages, religions, and cultures.

Change has been swift in Azerbaijan, which has the fastest growing economy in the world. Western companies pump money into the exploration for oil in the Caspian Sea basin. Water parks, upscale restaurants, and luxury hotels are under construction along the shore of the Caspian Sea and around the capital, Baku. The government dreams of hosting the Olympics in the not too distant future. However, not everything in Azerbaijan is caviar and champagne. Azerbaijan has not attained these advances without the cultural and societal growing pains that so often accompany economic progress. Hundreds of thousands of displaced people live in slums and derelict trains. The areas surrounding Baku are among the most polluted in the world. Corruption is rife and wealth stays in the pockets of a small minority. The growing polarization between the haves and have-nots has segregated a large portion of the population still living a traditional lifestyle.

I initially traveled to Azerbaijan to photograph the booming oil industry in 2007. Shortly after arriving, however, I found myself drawn to the intense changes caused by the rapidly growing economy. What I saw and felt reminded me of my own adolescence and uncertainty about my place in the world. I tried to capture this feeling of uncertainty in images: the tattered wallpaper of lakes and mountains, a dream broken by the yellowing stains of time and pollution. An awkward graduation day portrait. A carpet depicting a new sports car, hanging in an old railway car in which refugees lived. Stuffed animals on a grassy field, seemingly forgotten. A robot statue, an oversized toy, standing in a polluted wasteland. A young refugee, awkward, nervous. These are my Azerbaijan experiences and a reminder of my youth.

My hope is that the photographs will provide a richer understanding of Azerbaijan and its people, particularly those being left behind as the country modernizes.