Learning to Hope: Children, HIV, and Education in Lesotho 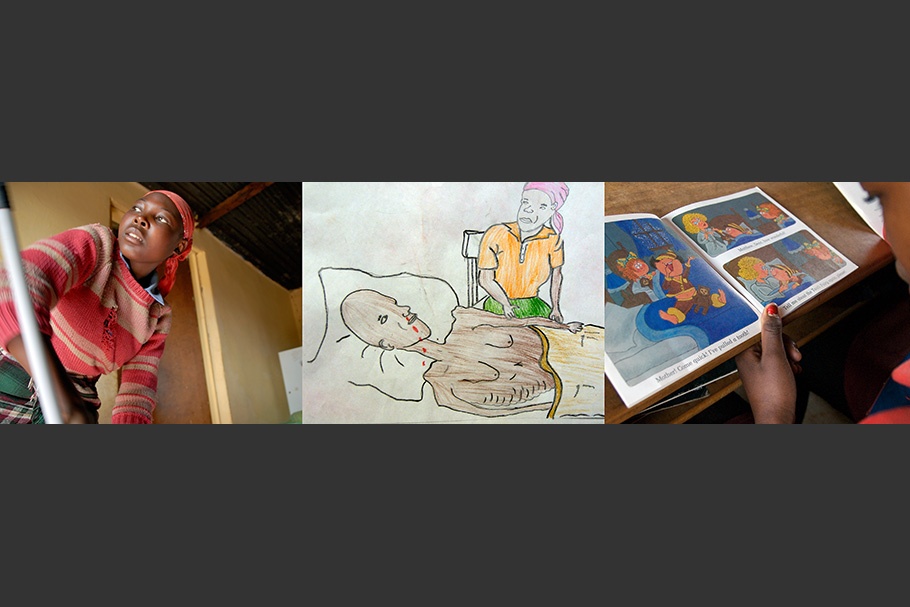 Teacher Me Theresa’s adopted daughter, Edumelen, is an orphan who took care of her parents until their death from AIDS two years ago. Now Edumelen lives in comfort and security with Me Theresa and works hard at learning to read and write English and doing chores like cleaning and cooking. Me Theresa has promised to pay Edumelen’s fees for secondary school if she passes her seventh grade exit exam in English after failing it once. Me Theresa looks after any orphaned girl “who doesn’t have good relatives that can raise her.” 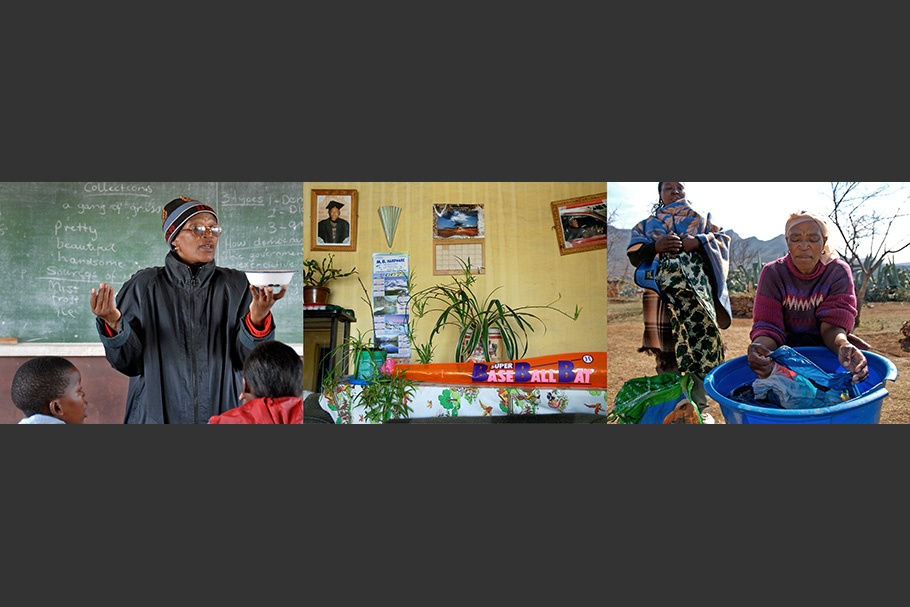 Me Theresa, bundled up in a hat and coat in her unheated classroom, teaches an energetic English vocabulary lesson to her seventh grade students at Makheteng Primary School. English is a difficult language for these Sesotho-speaking children, but Me Theresa knows that education is the only way out for the many young people deeply affected by the HIV epidemic. Me Theresa functions not only as the head teacher, but also as a guardian to the many orphans that pass through her school. Intimately involved with her village, she is often consulted when one of her former students is dying of AIDS. 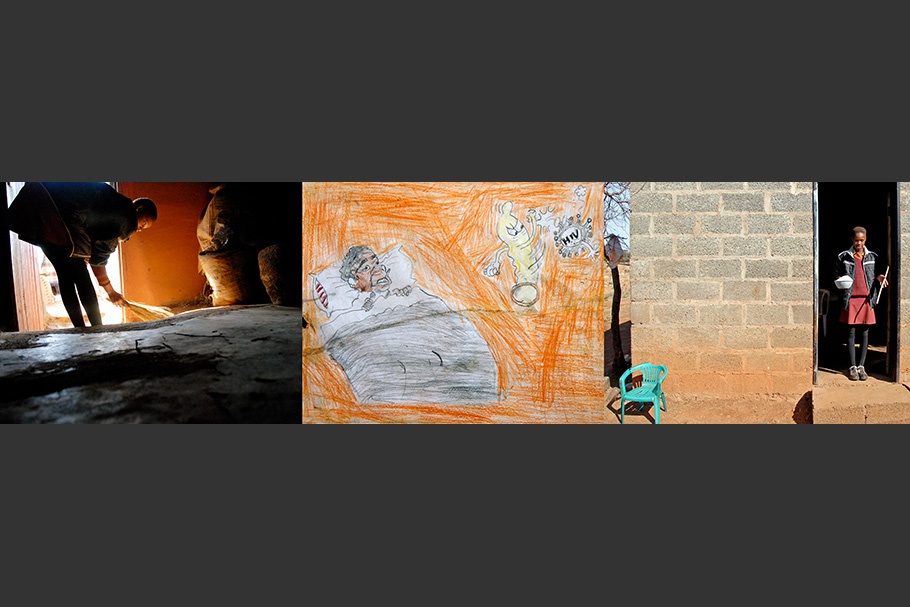 Matlali, whose parents died from AIDS, lives with her grandparents, sister, and nephews. Matlali must do all her homework on her own as no one else in her family can speak or read English. Though she is an excellent student, her future is unclear. Me Theresa’s seventh grade classroom is a refuge for Matlali and the other orphans, and they often volunteer to clean on Fridays. Matlali dusts and arranges the small classroom’s corner library.

Lesley Louden is an independent documentary photographer who has worked with filmmaker Anne Evans both in southern Africa and the western Caribbean. Recent assignments include “House of Books: In Their Own Words,” for the African Library Project and “The Paradox of San Andres: Island in Crisis” for the Colombian environmental agency, CORALINA, and most recently multimedia pieces for BUILD, a real-world entrepreneurial experience that empowers youth from underresourced communities in East Palo Alto and Oakland, CA.

Louden received her BFA in photography from Ohio Wesleyan University, MA in photo-media from The University of New South Wales, Sydney, Australia, and MFA in photography from Cranbrook Academy of Art in Michigan. She worked as an assistant for fine art photographer Ralph Gibson prior to beginning her own career. Her work has been shown in museums and galleries in the United States and Australia. Loudon also teaches photography at Foothill College and West Valley College in the San Francisco Bay Area.

While working on a documentary video for the African Library Project with filmmaker Anne Evans, I met many extraordinary children and teachers who are struggling with the HIV epidemic by focusing on literacy. Botswana and Lesotho, the two countries I visited, have the second and third highest HIV prevalence rates of infection in the world. I decided to document their stories, to try to show in images this intersection of literacy and the HIV epidemic that happens in the classrooms and libraries of the primary schools. The epidemic has devastated families and affected all citizens of both countries, but education provides hope, a way to begin recovering, especially for the young who have suffered such great losses.

Leshonono, an 18-year-old shepherd, is in the seventh grade at Malealea Primary School in mountainous Lesotho. Over half of the population lives on less than $1 a day, so school fees are often prohibitive. Leshonono lives with his grandparents and tends their small flock of sheep. He worries about what will happen to his grandparents if he passes his seventh grade test and has to move to town to attend high school. Fluent in his second language, English, and conversant with all aspects of the HIV epidemic, he wants to become a teacher in Malealea Valley. “I have to tell the little boys how to be good, and I have to teach them how to learn everything that I learned at school.”

Palesa is a 15-year-old orphan in Me Theresa’s seventh grade classroom in Malealea. Both her parents died of AIDS and Palesa lives in the family home with her slightly older sister. They struggle to make ends meet by brewing Basotho beer and selling it out of their home. Me Theresa keeps a watchful eye on the household, worrying about Palesa’s vulnerability and the emotional toll that these hardships take on her homework and her ability to pass the seventh grade exit test.

Mantoa, a 15-year-old student on scholarship, is the most brilliant girl in her school. Her goal is to become a nurse to help the many sick people struggling with HIV and AIDS in her village.  Mantoa shares a school boarding room with three other roommates because she lives a two-hour walk from school. The nearby Malealea Valley Secondary School’s library offers a safe and quiet sanctuary for Mantoa’s studies. The library houses books, including ones on HIV/AIDS, which are shared with all of the primary schools in the enormous Malealea Valley region.  Mantoa is very knowledgeable and open in discussing the AIDS epidemic. She is the library assistant and helps the teacher librarian shelve returned books.

The photographs in this exhibition illustrate the struggle occurring in primary schools to overcome the devastating effects of the HIV/AIDS epidemic in Lesotho. We interviewed six-year-old students who can explain HIV transmission vectors, and we saw writing samples and crayon drawings on the walls that deal with death due to AIDS. I have heard from journalists that sub-Saharan Africa is doomed due to the HIV/AIDS epidemic. But “Learning to Hope” reveals another truth through images of these resilient children, the future leaders of their country.