Afghanistan: Between War and Peace 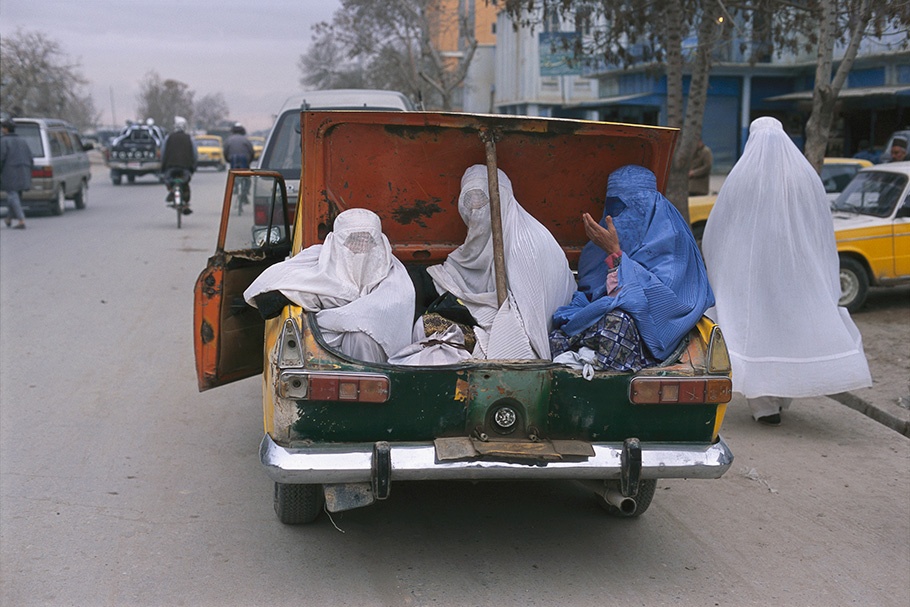 Though officially free to shed the burqa since the fall of the Taliban, only a small minority of women—especially in areas outside Kabul—actually do so. It is now seen as a traditional garment, even though women only began covering themselves completely with the burqa in 1995, when the Taliban enforced the law. 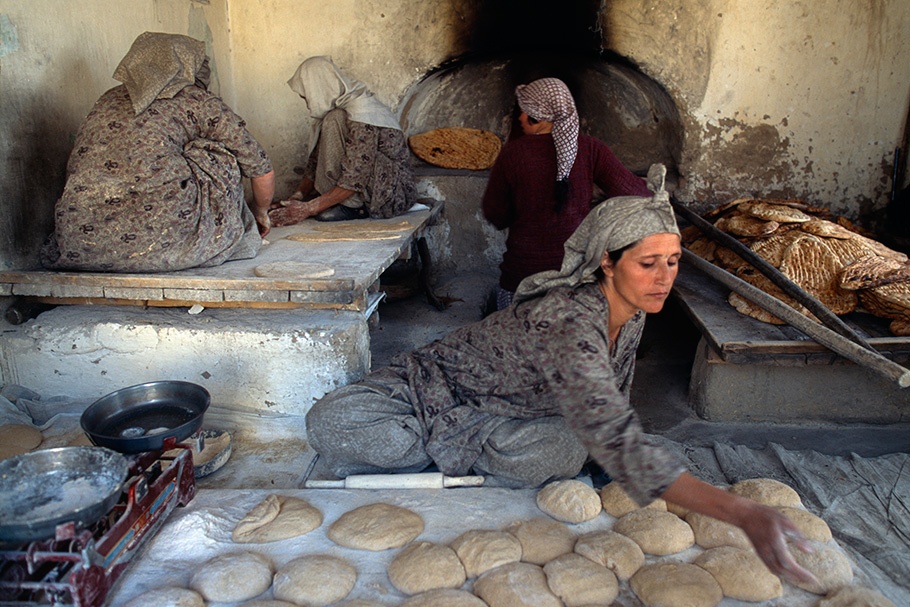 The staff of a "widow bakery" prepares dough for loaves of naan, an Afghan staple. Part of a UN World Food Program project begun during the Taliban regime, the 80 such bakeries in Mazar-e-Sharif, Kandahar, and Kabul offer uneducated women (mostly widows) rewarding employment while providing subsidized daily rations of bread to more than 150,000 destitute Afghans. 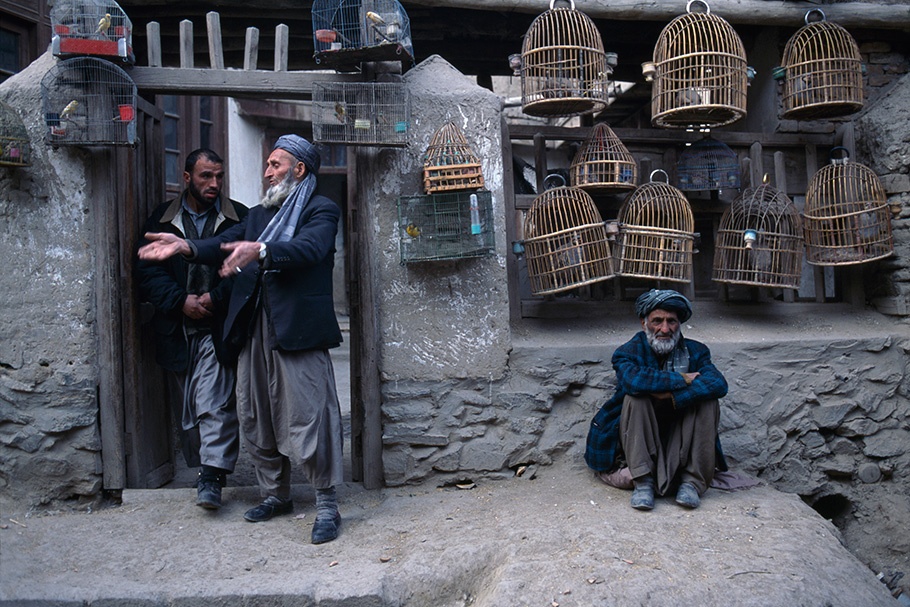 These birdcage vendors have set up shop in one of Kabul's many war-ravaged buildings. 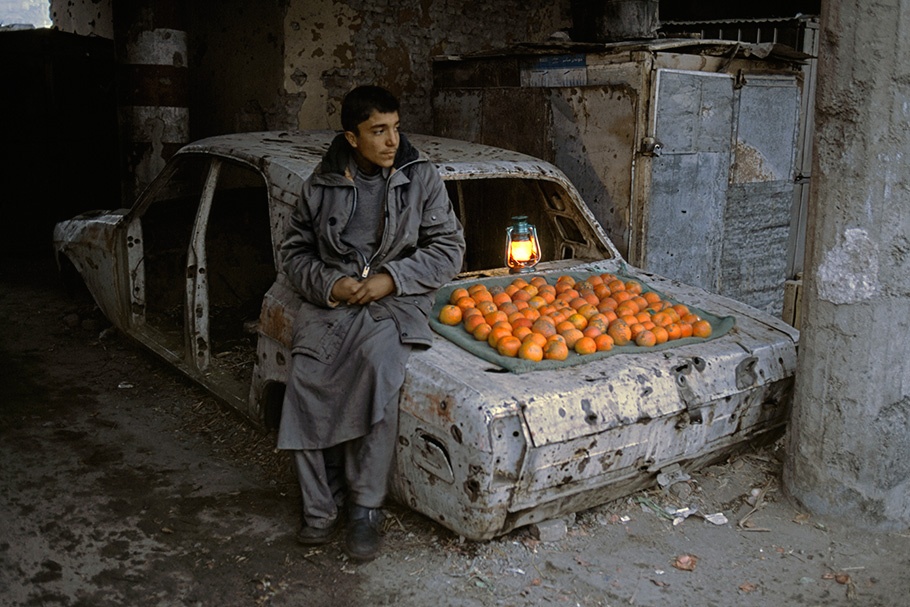 Amidst the rubble in Kabul, a vendor displays his produce on a battered automobile. 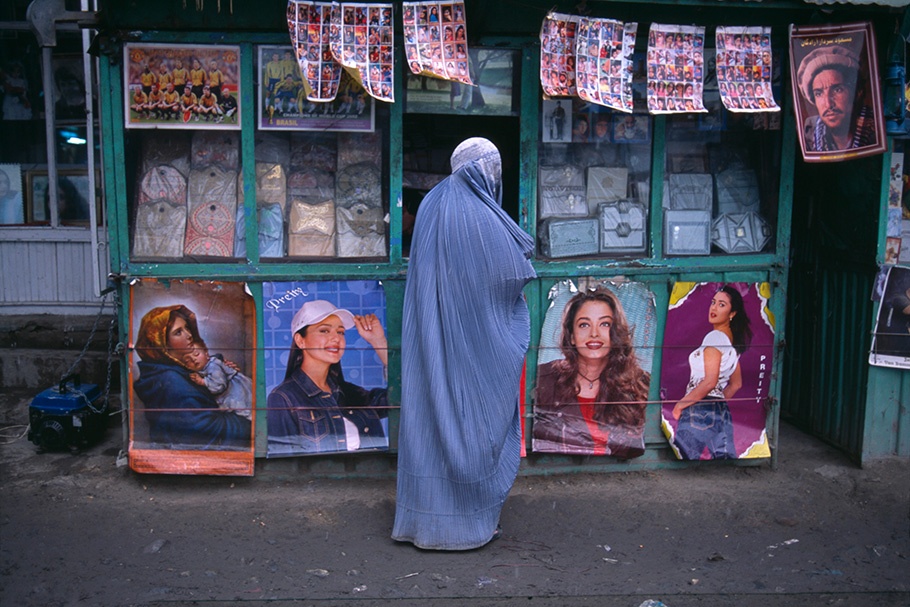 Bollywood movie posters fill the streets, giving Afghan men a peek at the women of the outside world, and allowing Afghan women to see how their gender is represented in other countries. 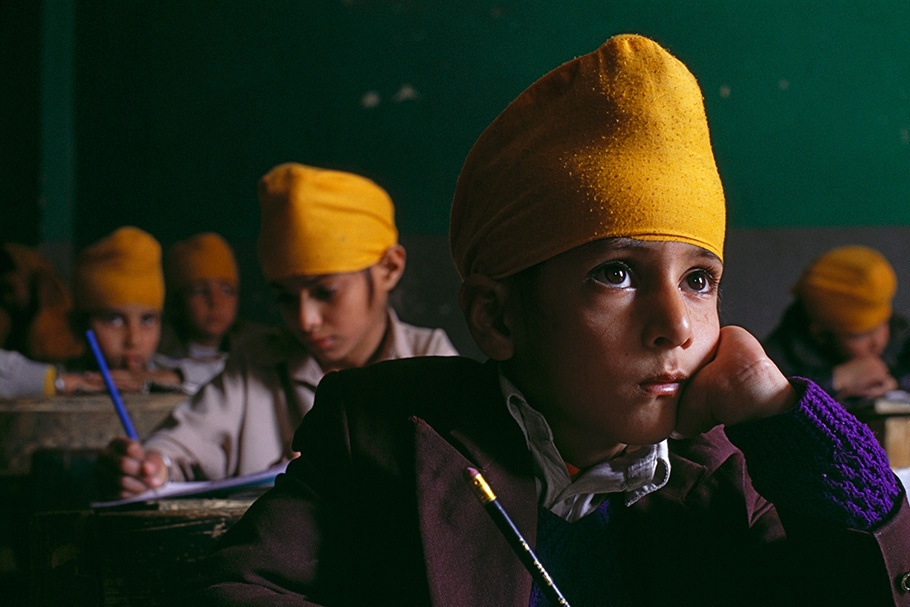 Afghan Sikhs are again permitted to attend school to study their religion and the Hindi language. In a country that appears to be homogeneous to the outside eye, Afghanistan's people will surprise you with their varying ethnic backgrounds and traditions. 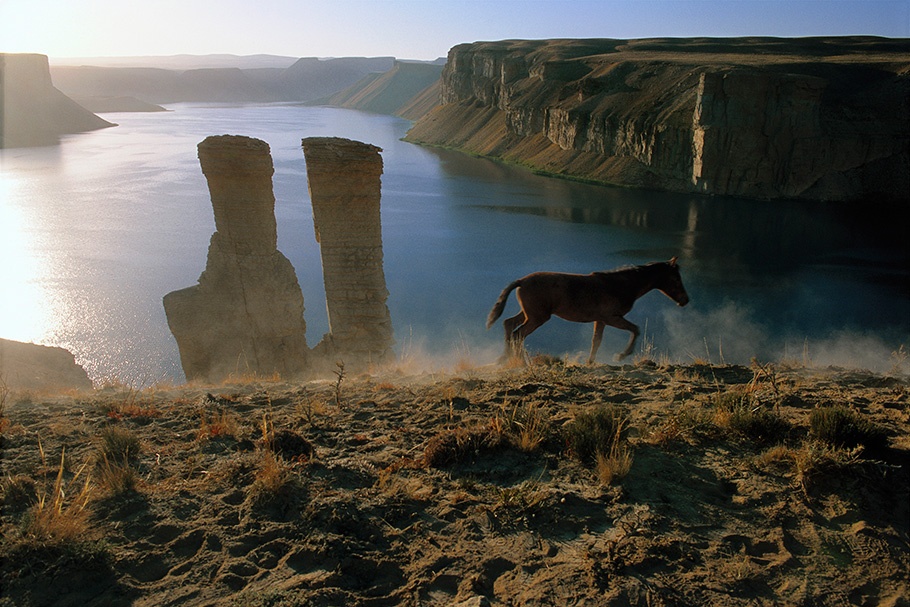 On a peaceful plateau over Bandi Amir Lakes, crumbling towers evoke a turbulent past. Afghanistan, 2002. 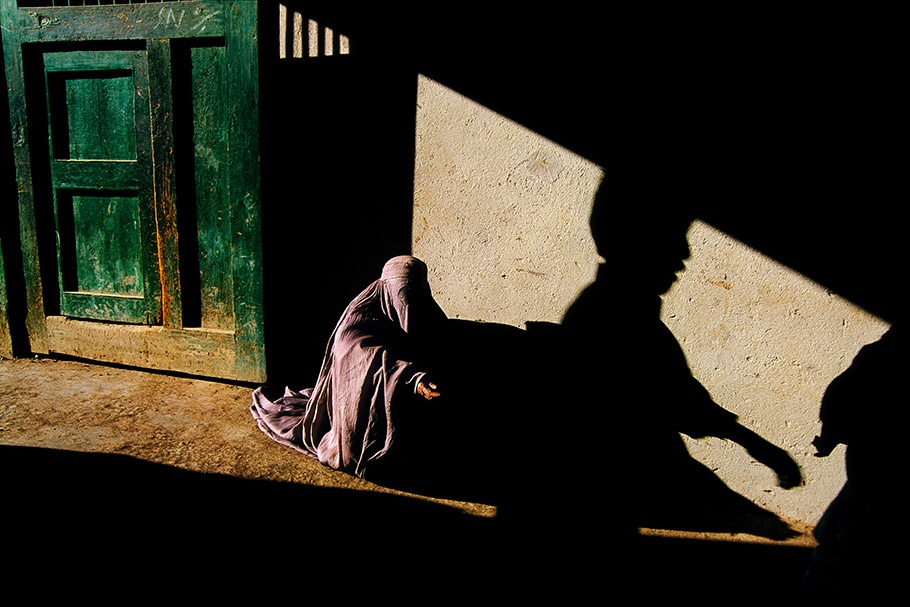 One of the country’s countless widows relies on the kindness of strangers for survival. Life under Taliban control was especially tough for Afghan widows, as women were not allowed to work. 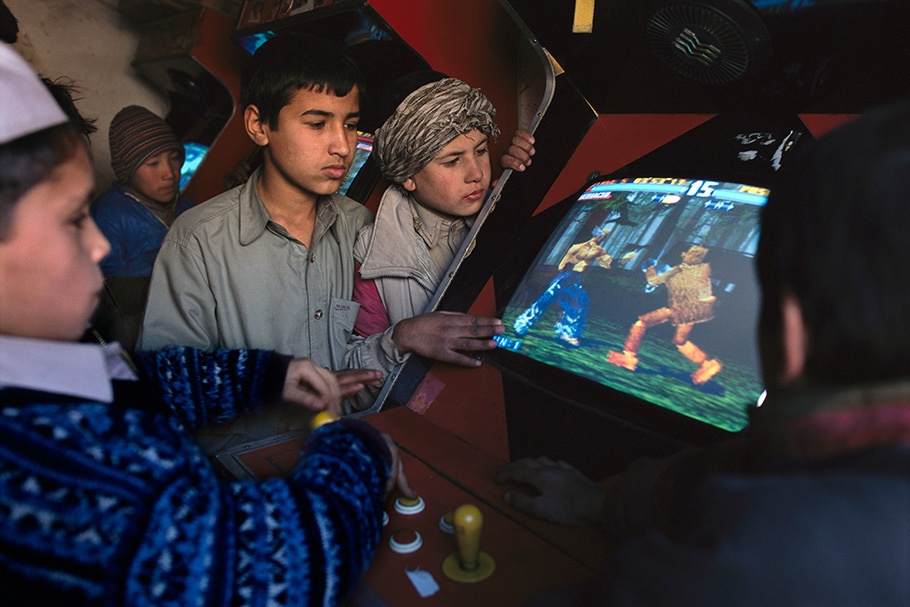 For almost 6 years, arcade houses remained dusty ghost towns. Now, young boys can again pummel their electronic foes. Prior to the Taliban’s five-year clampdown on all things judged un-Islamic, the forces of tradition and modernity had coexisted in the city. Many residents wonder how long the return of tolerance will last. 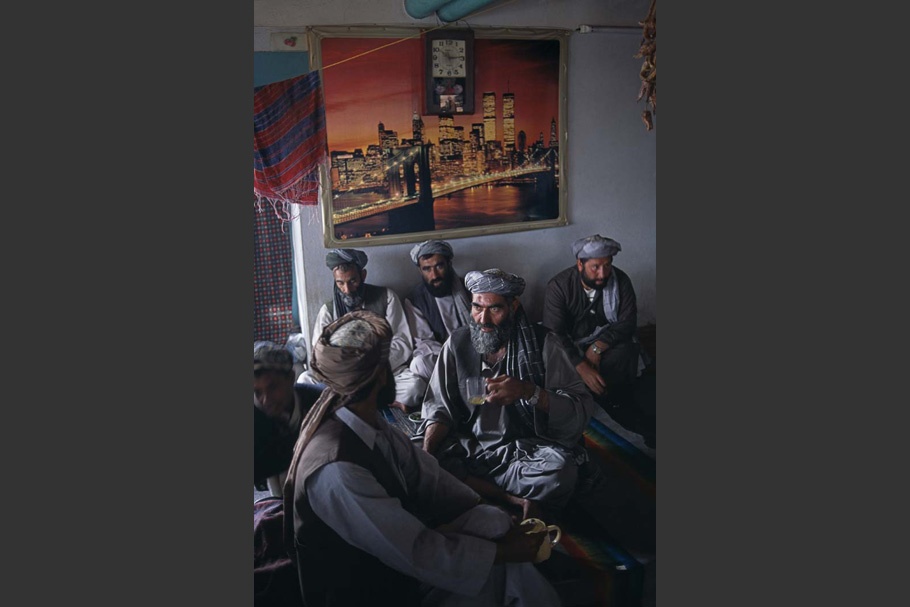 As life in Afghanistan returns to some semblance of normality, groups of men relax in Kabul’s many tea houses. 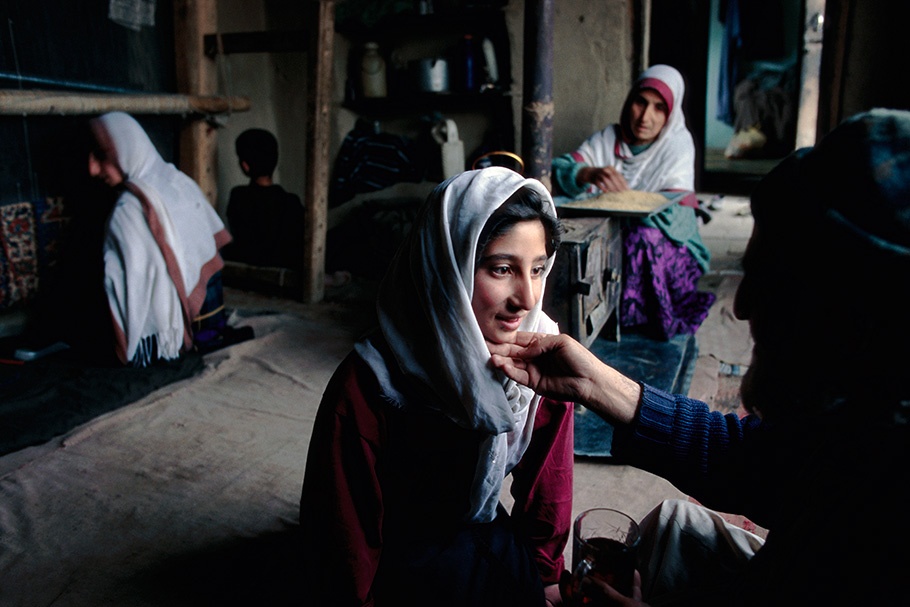 Fatona Gul talks to her father. Today, her mother, Reza Gul, is again able to work outside the home to support her children and disabled husband. The Taliban’s strict rules prevented her from working and drove her to despair. “Many times I wished God would kill me,” Reza says.

Steve McCurry began working in Afghanistan just before the Russian invasion in 1979. His most famous photograph, a portrait of an Afghan refugee girl, appeared on a 1984 cover of National Geographic, to which he is a frequent contributor.

A member of Magnum Photos since 1986, McCurry has covered many areas of international and civil conflict, including the Iran-Iraq war, the disintegration of the former Yugoslavia, conflicts in Beirut, Cambodia, and the Philippines, and the Gulf War.

Afghanistan has the highest maternity, child, and infant mortality rates and the lowest literacy rate and life expectancy in the world. However, there have been dramatic changes since the power shift two years ago. UNHCR tents in Kabul have been set up to accommodate the returning refugees from Pakistan and Iran. Three million children are again receiving an education. “Food for Work” road projects are employing men and feeding their families. A natural gas pipeline from Turkmenistan to Afghanistan is contributing to the country’s economic recovery. Still, there is much more to be done.

The status of women in the country has improved as girls have returned to school and women to work. The burqa has been declared voluntary, but the majority of women in Afghanistan choose to remain covered. Many fear that the Taliban will seize power again and punish those who have shed the burqa. As Betsy White, a scholar of Islam, states, “In a place where there is no assured sense of law and order, being completely covered can be very useful.”

Residents of Kabul have recently seen the return of popular culture that existed before the Taliban took over in 1995. The Mandawi Bazaar again booms with shouting vendors, crowded taxis, and families shopping. The children play arcade games, go to the movies, listen to music, and fly kites again. Television and radio stations are back on the air, finally able to broadcast an Afghan view of the news.

Although Kabul has felt this growth and remodernization, Afghanistan’s countryside still faces the same problems of illiteracy, health, and education. The people of Afghanistan will not see their lives improved until there is a stable government. Over the years that I have been photographing in Afghanistan, I have watched two generations grow up stepping on land mines, protecting their ears from deafening war planes, and rushing their loved ones to ill-equipped local hospitals.

I have been documenting the cyclical destruction and restoration of Afghanistan for 24 years.  From the Soviet invasion in 1979 to the fall of the Taliban in November 2001, my desire to see the people of Afghanistan live in peace has grown as my personal connections and friendships in the country have matured. Inspired by my 1984 photograph of Sharbat Gula, a young Afghan refugee, and her rediscovery 17 years later, the National Geographic Society and The Asia Foundation created the Afghan Girls Fund, raising nearly half a million dollars for schools and food. When I returned to the country last fall, I was able to observe the progress in these schools firsthand. Teenage girls are learning to use computers, enrolling in painting classes, and even aspiring to a college education.

The Afghan Girls Fund’s progress in Kabul led a group of colleagues and me to create ImagineAsia, a nonprofit organization dedicated to addressing the educational and health care concerns of smaller communities in need.  Working in partnership with community leaders and local NGOs, ImagineAsia is building a community center in Afghanistan’s countryside that offers education and health care.