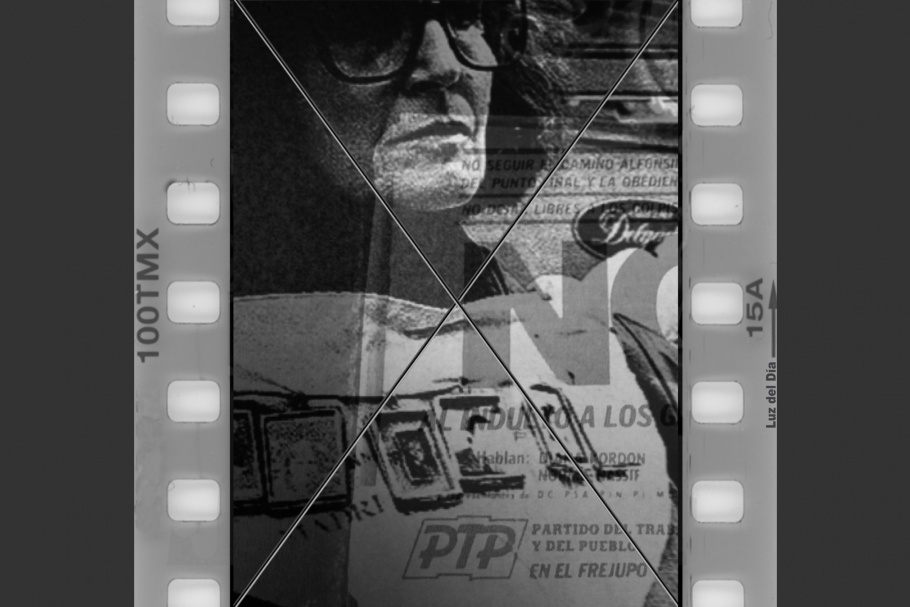 La Lucha por Ser Madre is based on a photograph of a protest of the Madres de Plaza de Mayo (Mothers of the Plaza de Mayo), an association of Argentine mothers whose children were disappeared during the Argentine Dictatorship (1976–1983). They began marching in 1977 at the Plaza de Mayo, in front of the Casa Rosada presidential palace in Buenos Aires, in order to protest the disappearances.

This artwork is created from the archive of 2,540 scanned negatives Stephanie Mercedes is digitally altering and re-copyrighting in order to donate the images back to the public domain.

Stephanie Mercedes (American, b. 1993) is an Argentine/American artist who lives and works across the Americas. Her research-based art practice intersects with the law and social justice, and questions the purity of the documentary image, the singularity of memory, and the purpose of the archive.

Mercedes was an Art & Law Fellow (2016) and a Light Works Grant recipient (2017). The Open Society Moving Walls Grant will support the completion of the Luz del Día: Copyrighting the Light of Day project.

In 2015, Copyright Bill No. 2517-D-2015 was introduced to the Argentine Congress, proposing to extend photographic copyright from 20 years postproduction to 70 years postmortem.

If passed, the bill will inhibit access to a vast trove of photographs from the Argentine “Dirty War” (1976–1983).

Many photographers who had documented the war were among the 30,000 victims who were disappeared by the country’s right-wing dictatorship and therefore do not have a legal death date. Should the bill be enacted, their photographs—currently in the public domain—would be considered “orphaned works,” shifting ownership to the state. Argentina has a poor record of making state-owned archives, regardless of their subject matter, accessible to the public.

In an attempt to keep these images publicly available, I have altered them by reverting the scanned prints back to negatives; layering the images; cropping; and changing the image contrast. By extensively manipulating the images, I can personally re-copyright these new artworks and donate them back into the public domain. If proposed Copyright Bill No. 2517-D-2015 is passed, this newly-created archive will be the only publicly accessible photographic archive of Argentina’s “Dirty War.” This archive is both saved by the law and safe from the law.

This project is inspired by the proposed legislation, as well as a recent discovery of my own personal connection to the war. It is an attempt to understand my past and make permanently accessible a visual record of a violent and repressed history that left little photographic evidence.