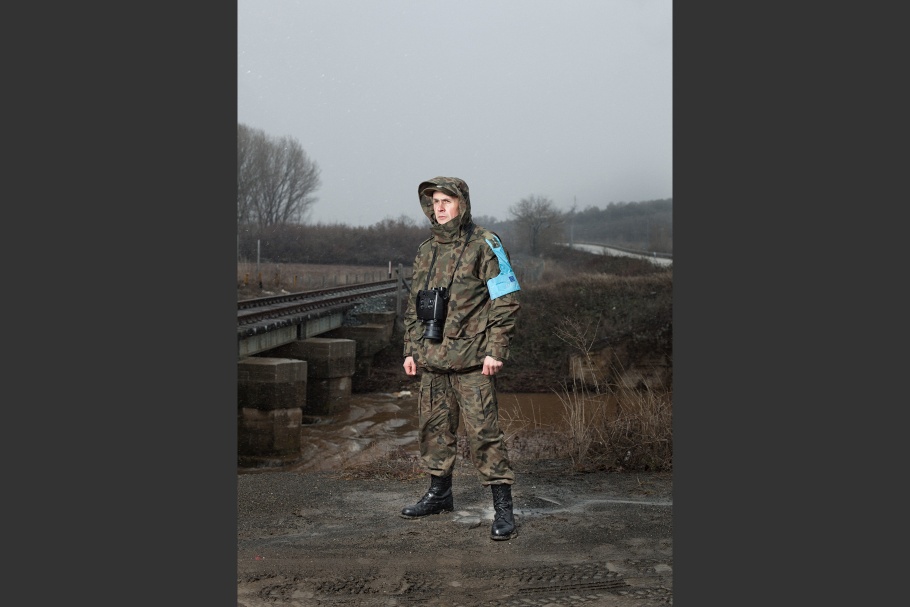 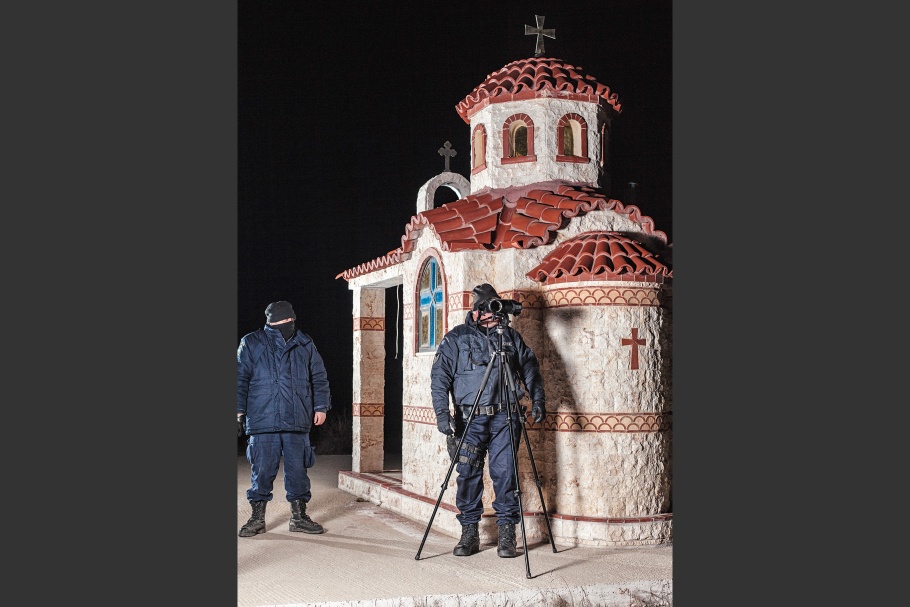 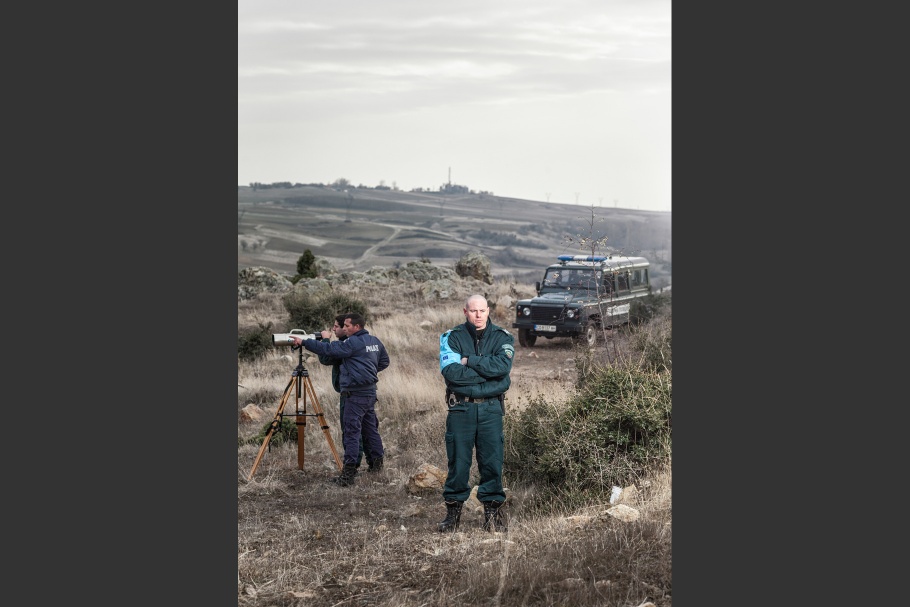 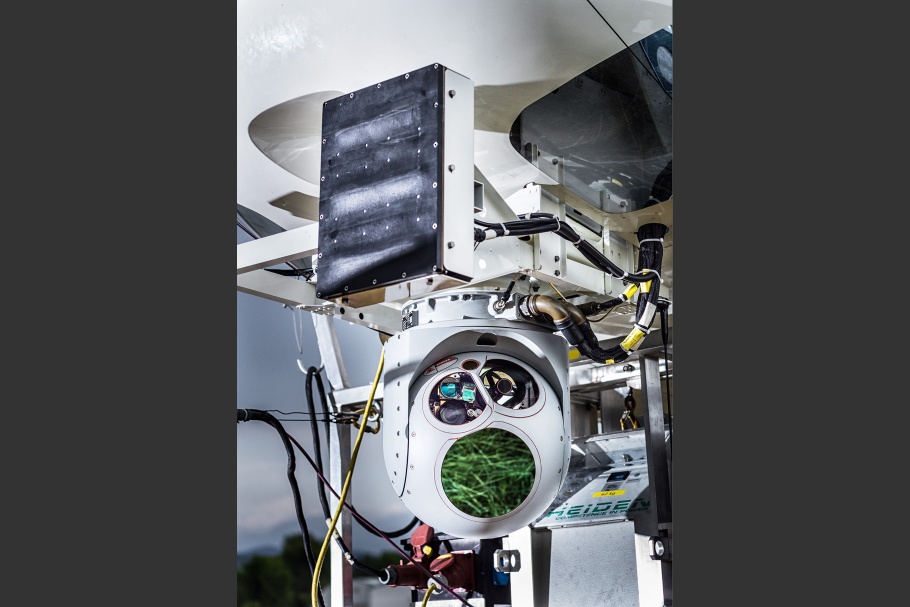 Frequency-Modulated Continuous-Wave Radar and High-Performance Wescam MX 15, 2013.
A frequency-modulated continuous-wave radar—used for the detection of small wooden boats—and a high-performance Wescam MX 15 surveillance camera are mounted on a dirigible. This photograph was taken during an initial testing phase of a EUROSUR research project aimed to improve control of illegal immigration in the Mediterranean. 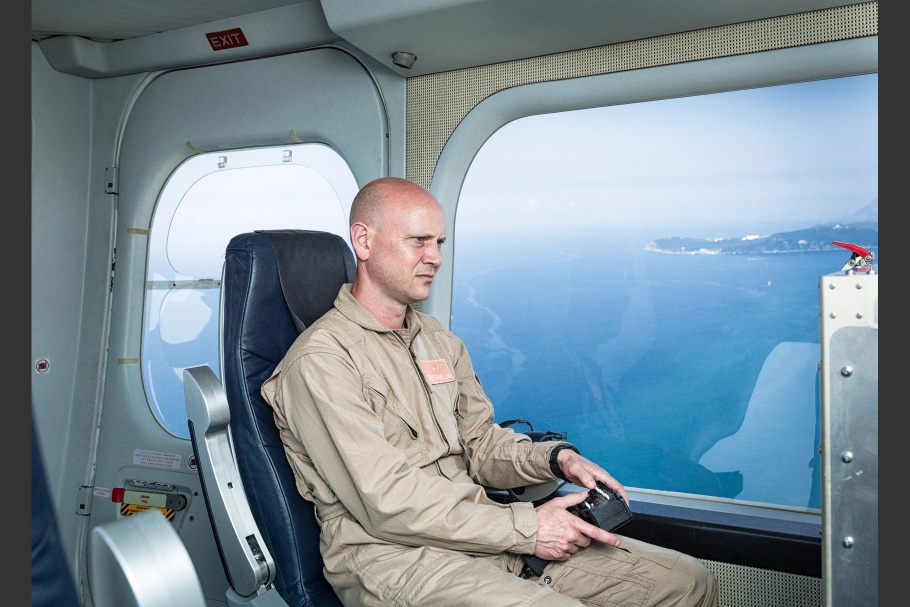 Monitoring Zeppelin, 2013.
A Wescam MX 15 surveillance camera operator inside a monitoring zeppelin. This photograph was taken during an initial testing phase of a EUROSUR research project aimed to improve control of illegal immigration in the Mediterranean. EUROSUR employs satellite technology, high-tech radar, and surveillance drones to enable more intensive exchange of information between EU countries. 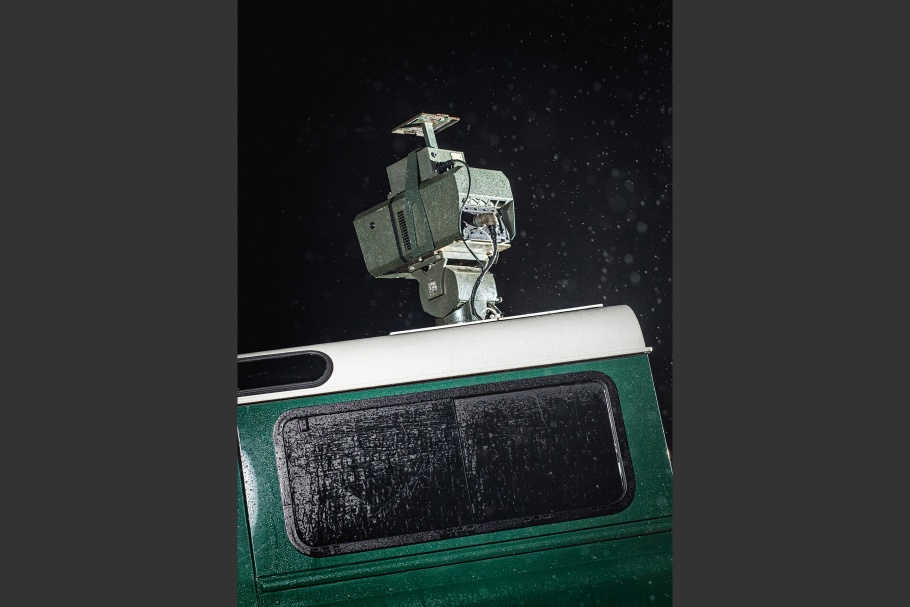 Julian Roeder (German, b. 1981) grew up in Berlin and trained as a photographer at the Ostkreuz photographers’ agency before studying photography at the Academy of Visual Arts, Leipzig.

Roeder’s pictures have a strong subtext; they hint at social conditions and developments beyond those that are concretely shown. Taking a conceptual-documentary approach, he creates series that build upon each other and address the relationship between the economy/economics and power, often from a global perspective. Roeder consciously employs compositions that recall battle scenes in historical paintings or have the visual pull of advertising, as a means of distinguishing his work within the everyday flood of images that we encounter.

Mission and Task deals with the technologization of security and the infrastructure of Europe’s external borders, which have become exponentially more controlled through new systems of surveillance.

On December 2, 2013, the border security system EUROSUR went into operation with the function of unifying and interconnecting all current systems. Under the coordination of Frontex, the European Union agency for external border control, EUROSUR enables border control authorities of individual EU member states to now directly exchange information with the assistance of national coordination centers. EUROSUR evaluates data from transmitters such as satellites, radar stations, airplanes, and drones.

With this, the EU has granted Frontex new power. Current law and accepted practices allow every newcomer the possibility to reach land and submit an application for asylum. As Frontex increases its ability and authority to intercept migrants in international waters, these laws and practices may change. Going forward, the border protection agency might eventually gain the authority to stop boats found in international waters, search them, and turn them back.

Direct contact between EU border controllers and migrants will become less frequent in the future. Upstream, a system of satellites, radar installations, and infrared cameras, is in place. It will register planned crossings long before the EU borders are even in sight. The system’s highly sensitive, multipartite nature strengthens EU boundaries and renders them far more resistant than water, barbed wire, or cement. The system will keep people out long before they even see or approach the border.

With my work, I intend to portray a border security system consisting of surveillance infrastructure that ensures the relative affluence of life in Europe. I know of many works dedicated to representing the fate of migrants. I wanted, however, to create works that do not focus on “the other” itself, but on the systems and mechanisms used to construct and control “the other.”

In making these images, I was particularly dedicated to showing how technologization turns the handling of migrants into an abstraction. The focal point is a technology that records humans as data, currents, points of light, and as signals—not as individuals. Through an excessive enhancement of the photographic aesthetic, this technology can become a tool and symbol for alienation instead of a responsible means of dealing with people.