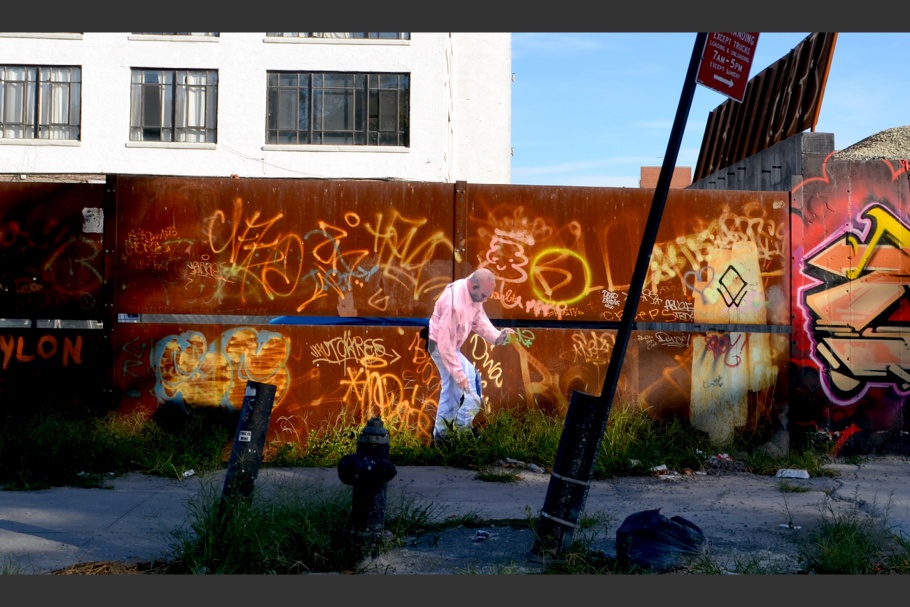 Street Ghosts is a series of street installations that reinserts people captured by Google Street View back into the public space. Cirio selects installation sites, most often in urban environments, and then searches Google Street View for people photographed in front of those locations. The figures are then reproduced life-size and installed at the very sites where they were originally photographed.

Paolo Cirio (Italian, b. 1979) is an innovative and award-winning conceptual artist working with various media and domains. He currently lives in New York City.

Cirio works with the systems of distribution, organization, and control of information that affect flows of social, economic, and cognitive structures. He expresses his conceptual works through performances, photos, drawings, videos, and installations. His controversial work has unsettled the likes of Amazon, the Cayman Islands, Facebook, Google, NATO, and VISA, among others, and has been featured by global media such as ABC, CNN, Der Spiegel, Fox News, and Huffington Post.

Cirio’s art has been presented and exhibited in major art institutions, museums, and festivals worldwide and he has won a number of awards including the Golden Nica at the 2014 Prix Ars Electronica, Transmediale, and the Eyebeam Fellowship in 2012.

In this project, I expose the specters of Google’s lasting realm of private, misappropriated data: the people captured by Google’s Street View cameras. I physically mark these bodies’ ghostly, virtual presence by re-inserting them—in street art fashion—in the precise spot where they were originally photographed.

These images do not offer details. Rather, their blurred quality gives a gauzy, spectral aspect to the human figures, unveiling their presence like a digital shadow haunting the real world.

The collections of data owned by Google and similar corporations have become the material of everyday life, yet their source is the personal information of private individuals. By remixing and reusing this material, I explore the boundaries of ownership and exposure of this publicly-displayed, privately-held information about our personal lives.

With Street Ghosts, the artwork becomes a performance, re-contextualizing not only data, but also a conflict. The work takes place on a battlefield in an information war between public and private interests aiming to win control of our intimate lives and habits. Who has more strength in this war? And whose interests will prevail? Those of artists? Corporations? Legislators? The public? Or technology? And—depending on the victor—what permanent changes will result?

These ghostly human bodies are casualties of the information war, a transitory record of collateral damage. Affixed to walls in various urban environments, these obscure figures are at the murky intersection of two worlds: the real world of things and people, from which these images were originally captured, and the virtual afterlife of data and copyrights, from which the images were retaken.

Street Ghosts confronts the public with visual traces of the kind of data collected about us daily. We are forced to reckon with the possibility of our own likeness appearing as specters, forever trapped in a digital world.