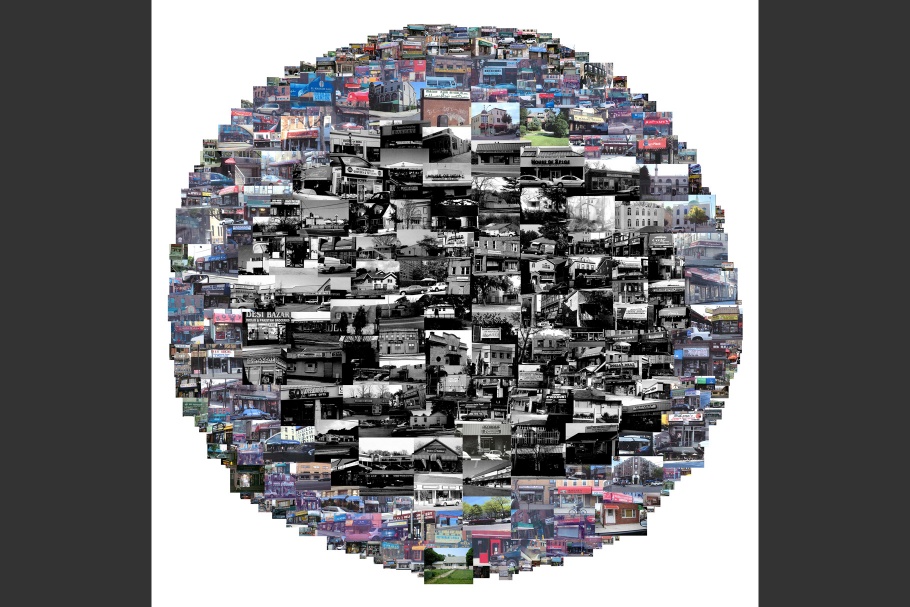 Detail from Information of Note, 2014.

Information of Note is an installation comprised of text and photographs that were extracted from NYPD Demographics Unit records that profiled Muslim-owned or affiliated businesses, gathering places, and sites of worship. Each location entry includes: a photograph of the exterior; location name, address, and phone number; ethnicity of the owner(s); and other "information of note" collected by plainclothes detectives. Many of the observations are quite banal—together they paint an unremarkable portrait of quotidian life. The Demographics Unit program is said to have "never generated a lead."

In 2012, Begley created Drones+, an iPhone app designed to send users a notice every time a drone strike is reported in the news. Now known as Metadata+, it was rejected from the App Store five times due to “excessively objectionable or crude content,” before being accepted by Apple in 2014.

Begley’s work has appeared in New York Magazine, the New York Times, NPR, Wired, and at the New Museum of Contemporary Art. He currently works at First Look Media and is represented by Robert Koch Gallery in San Francisco.

In 2011, the Associated Press revealed the existence of the Demographics Unit (later renamed the Zone Assessment Unit), a secret unit within the New York City Police Department (NYPD) that monitored the daily lives of Muslims. Using census information and government databases, the NYPD mapped ethnic neighborhoods—in places such as the Bay Ridge section of Brooklyn, New York, and Newark, New Jersey—and dispatched plainclothes detectives to photograph, observe, and create extensive files on Muslim owned or affiliated businesses, gathering places, and sites of worship.

The harms of this program have been well documented by groups like the American Civil Liberties Union, the Asian American Legal Defense and Education Fund, the City University New York School of Law's Creating Law Enforcement Accountability & Responsibility project, and the Muslim American Civil Liberties Coalition. According to these groups and others, the Demographics Unit did more than engage in systematic racial and religious profiling: it created a climate of fear and suspicion that encroached upon all aspects of everyday life.

But what did this surveillance actually look like? What were the images and information that populated these files? What might the visual vernacular of NYPD surveillance tell us about the nature of spying and secrecy today?

Plain Sight is an attempt to catalog the banality and violence of the visual culture of the NYPD’s secret spying unit. Using the Associated Press-released NYPD documents as source material, the project brings attention to maps produced by the unit that identify “locations of interest” where people ate, shopped, and prayed, as well as photographs and observations made by undercover detectives at those sites. By pulling apart the various elements in these documents and re-arranging the material in the form of collage, Plain Sight re-presents that which has already been made public, and draws attention to the often mundane, innocuous, and indiscriminate nature of the information collected. Through this work, viewers are provided with different entry points through which they can see surveillance and examine this historical archive in a new light.

Update: On April 15, 2014, the New York City Police Department announced the closure of the Zone Assessment Unit. While this is considered a positive step, advocates stress that overbroad surveillance of Muslim communities continues.